With their quick assembly and creamy, zesty filling, Baked Chicken Taquitos with Avocado Cilantro Dipping Sauce are guaranteed to be a hit with kids and adults alike!

Whether you’re looking for a yummy dinner to ring in the weekend, garner enthusiasm from the kiddos, or change up Taco Tuesday (Taquito Tuesday, anyone?), Baked Chicken Taquitos are sure to fit the bill!

These flew — flew! — off the baking sheet, y’all. My boys would have happily polished off the dozen between them, but to their disappointment, I’m rather a killjoy when it comes to excessive gorging. So I let them have a couple of taquitos each and made them eat raw celery and carrot sticks to balance out the meal. And then after they went to bed, I had three more of these bad boys for a late-night snack. Excessive wha?

Aside from tasting pretty darn good, the appeal of these Baked Chicken Taquitos is that they’re so darn easy to make. Inspired to use up some leftover rotisserie chicken, I basically took the filling from my Creamy Chicken Taco Hand Pies recipe and adapted it a bit. Then I rolled that good-enough-to-eat-with-a-spoon mixture into some flour/corn blend tortillas (we’ll talk about those in a minute), arranged them on a baking sheet, and baked ‘em until the filling was bubbly and the ends of the tortillas were toasty. 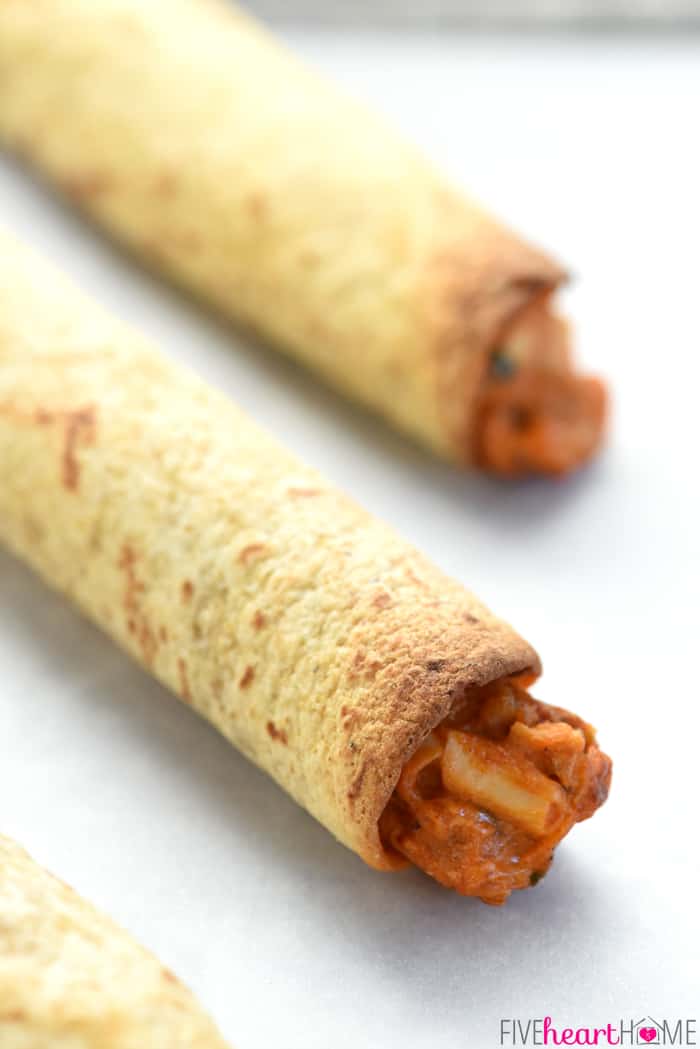 While my taquitos were baking, I decided to whip up some Avocado Cilantro Sauce for drizzling and dipping. Yummy doesn’t even begin to describe how deliciously this concoction complements the taquitos. I got all fancy for these photos and scooped my avocado cilantro goodness into a plastic baggie, snipped off the corner, and piped it over the stack of taquitos. But rest assured that it’s equally tasty plopped right on top or used as a dipping sauce.

As an aside, my hubby is allergic to avocado (poor guy), so he enjoyed his taquitos with some leftover Creamy Jalapeño Dip (YUM!) and had no complaints. 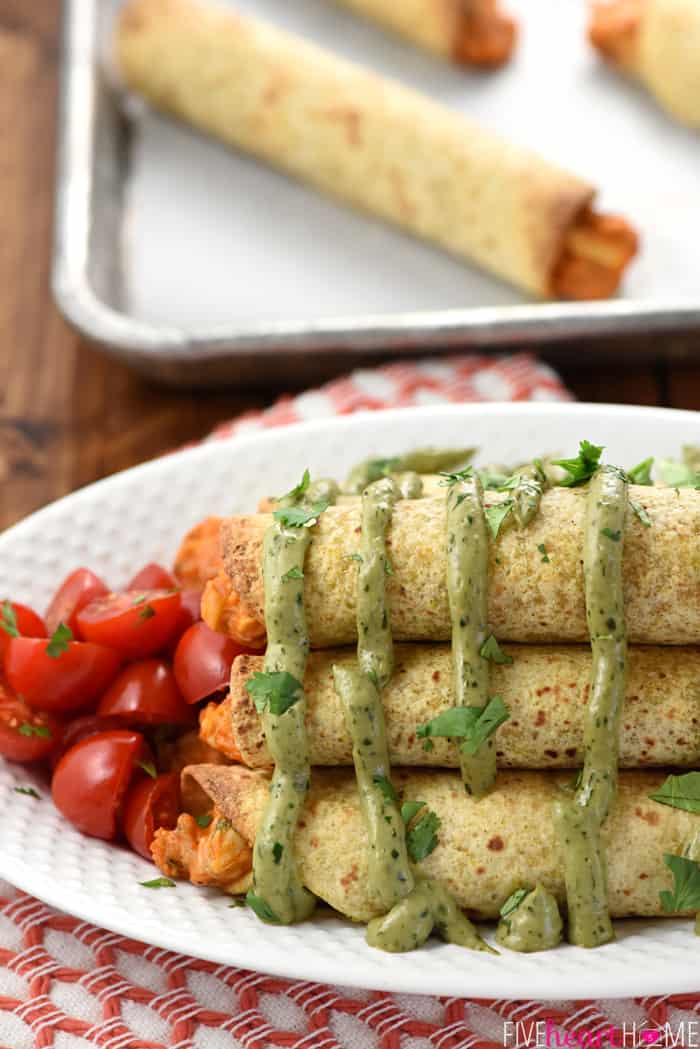 And now for those aforementioned flour/corn blend tortillas…have y’all tried them yet? I really like them for recipes like this because they don’t turn gummy like regular flour tortillas sometimes do, but they’re more pliable than regular corn tortillas and much less likely to split or tear when you’re filling them. They’re also becoming easier to find in the grocery store…I saw two different brands available at the same store on the day I bought these. All of that being said, if you can’t find them or would prefer using straight flour or corn tortillas instead, feel free! Just be sure to wrap corn tortillas in a damp paper towel and microwave them until just warm to increase the odds that they won’t split once rolled. 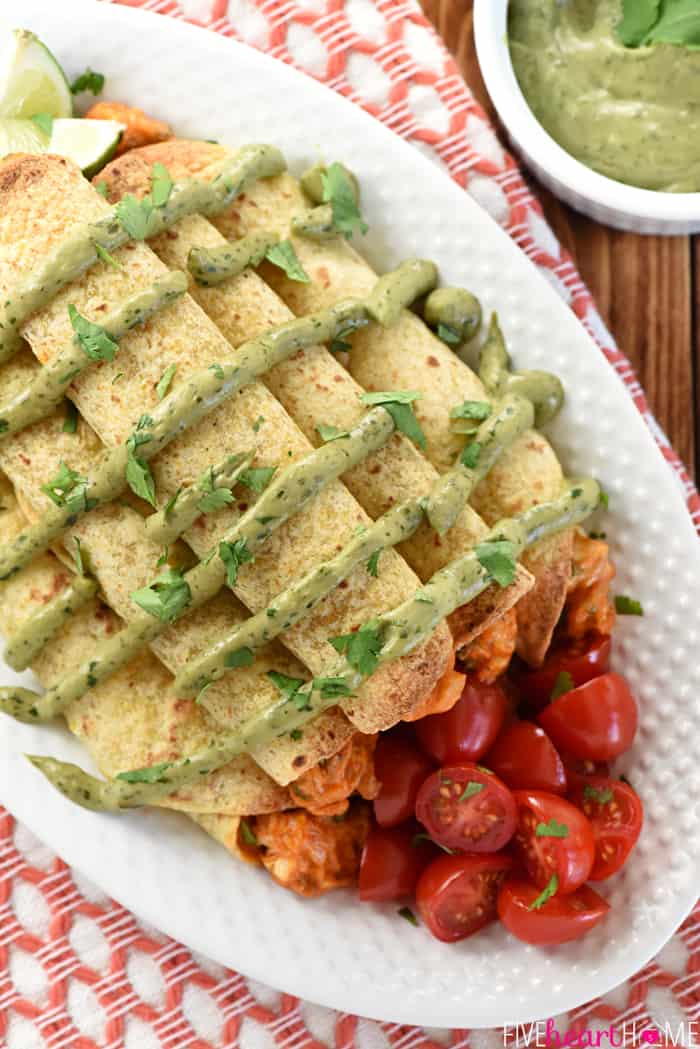 Suffice it to say that my kids are already asking when we can have Baked Chicken Taquitos again. And my answer is SOON! Because who am I to argue with a dinner recipe that’s effortless and enthusiastically received? Not to mention the late-night snacking potential… 😉 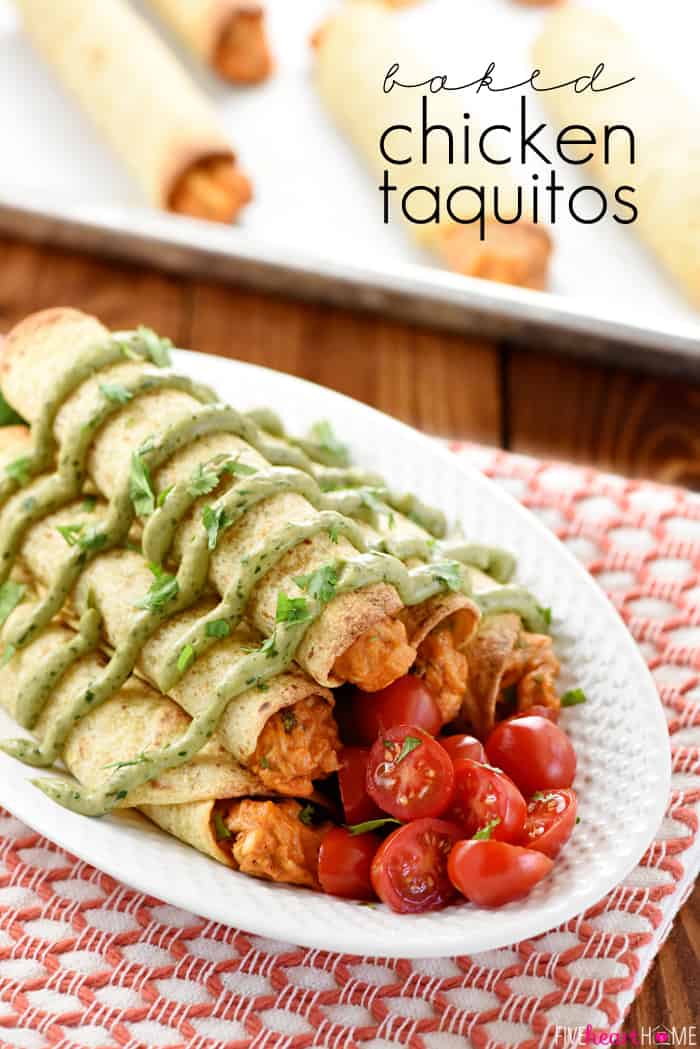 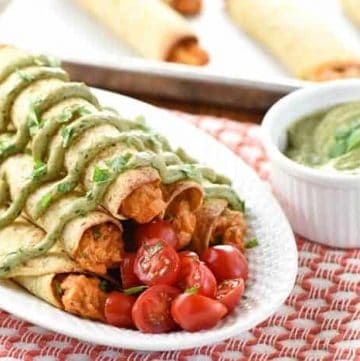 FOR THE DIPPING SAUCE:

I typically use whole milk when making the Avocado Cilantro Dipping Sauce. However, you may use an alternative liquid or type of milk if you wish. I've made the recipe with almond milk to keep it dairy-free. You could even use a thin, runny salsa if you don't mind the color of the sauce changing from green. Basically, you just need to add some sort of liquid so that the ingredients will move around in the blender enough to be pureed. Milk is pretty neutral and adds to the creaminess, so that's what I usually reach for.
Calories: 233kcal | Carbohydrates: 18g | Protein: 12g | Fat: 13g | Saturated Fat: 5g | Cholesterol: 38mg | Sodium: 440mg | Potassium: 230mg | Fiber: 2g | Sugar: 2g | Vitamin A: 355IU | Vitamin C: 2.3mg | Calcium: 122mg | Iron: 1.5mg