With just a handful of ingredients, Cilantro Lime Rice is the perfect base for burrito bowls or a delicious side for all of your favorite Mexican recipes! 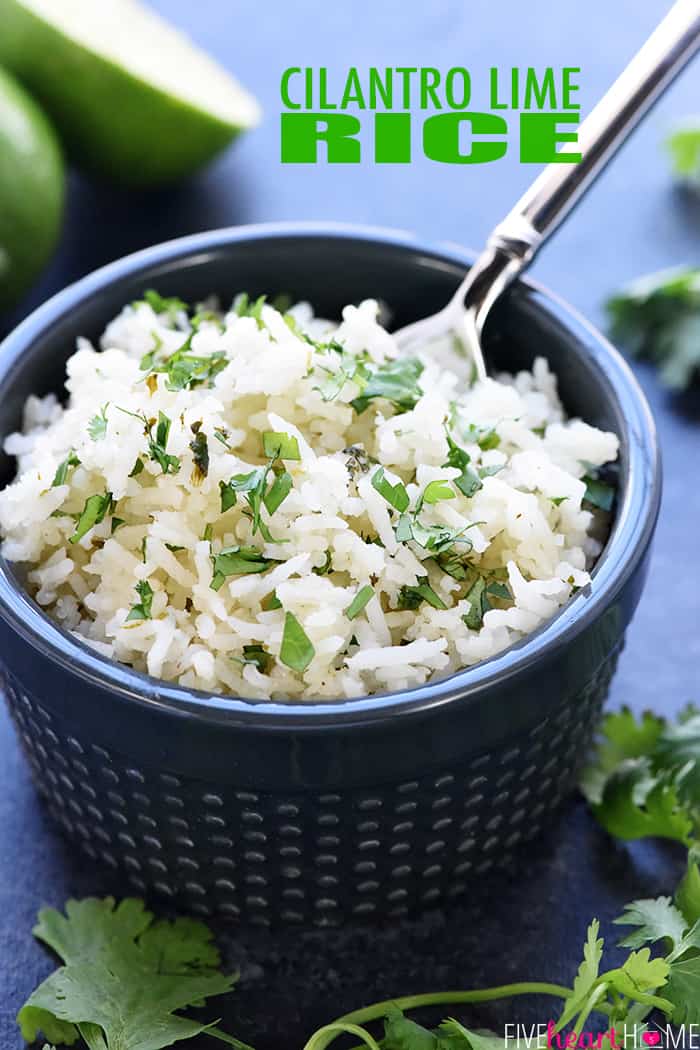 Having attended Texas A&M, FreeBirds was an integral part of my college experience. Now that we take our kids back for Aggie sporting events several times per year, we always make it a point to eat there…even though, technically, there are now locations in Austin and we could just dine there from home. But let’s be honest here…enjoying a FreeBirds Monster Burrrito from behind the burnt orange curtain just isn’t the same. 😉

For those who are uninitiated, FreeBirds is a lot like Chipotle…except FreeBirds was actually around first! But one thing you can enjoy at both of those fine dining establishments is Cilantro Lime Rice. I always choose it over Spanish Rice when I order – even though I enjoy both – because it’s just so fresh and zippy. Cilantro Lime Rice is great as a side, and it’s great as a base for burrito bowls or stuffed into burritos. 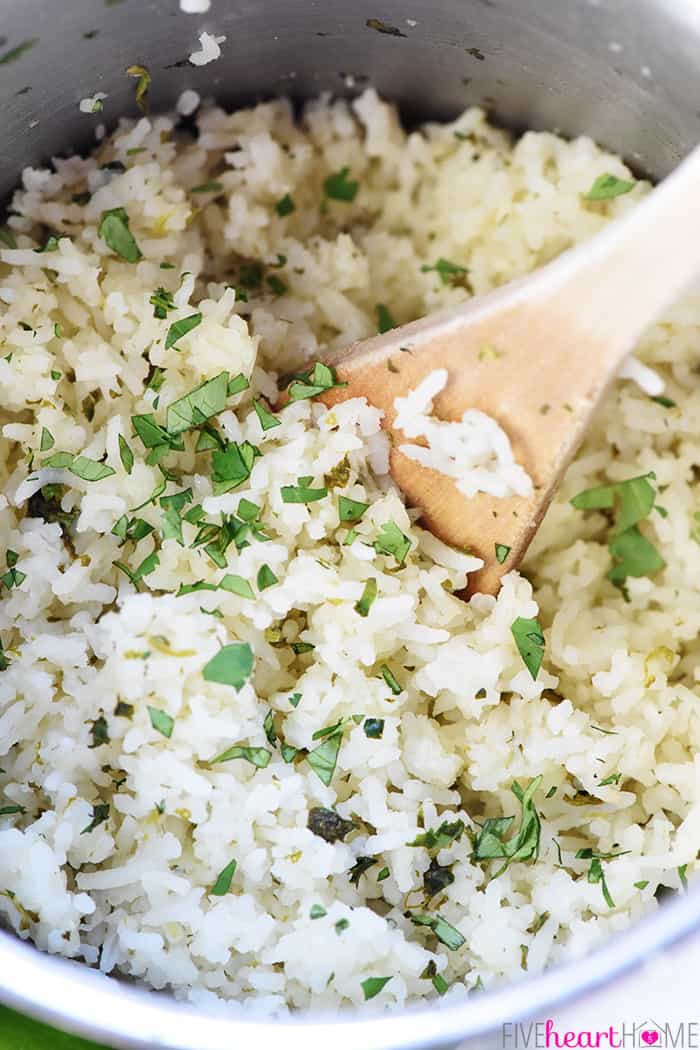 When I discovered that another one of our favorite local restaurants serves Cilantro Lime Rice, it occurred to me that perhaps I should attempt to recreate the recipe at home. After all, I’ve already perfected my Easy Spanish Rice recipe…why not add another option to the ol’ Tex-Mex repertoire?

And so the great experiment began. I initially used my Easy Spanish Rice recipe as a template, creating a cilantro lime puree in the food processor and adding it to the broth when cooking the rice. But once the rice was done, the cilantro had turned all dark and unattractive and the flavor had become muted. Not exactly the pretty, zesty, white and green side dish I was going for.

On my next attempt, I cooked my rice in broth and lime zest, with a bay leaf thrown in for extra flavor (an idea I got from the Chipotle menu).

Then once the rice was cooked, I stirred in finely minced cilantro and fresh-squeezed lime juice. Then I garnished with extra cilantro because, well, my family likes a lot of cilantro. 😉

I definitely preferred the latter method of arriving at Cilantro Lime Rice deliciousness. The flavor was brighter, the texture was better, and the colors were nicer. 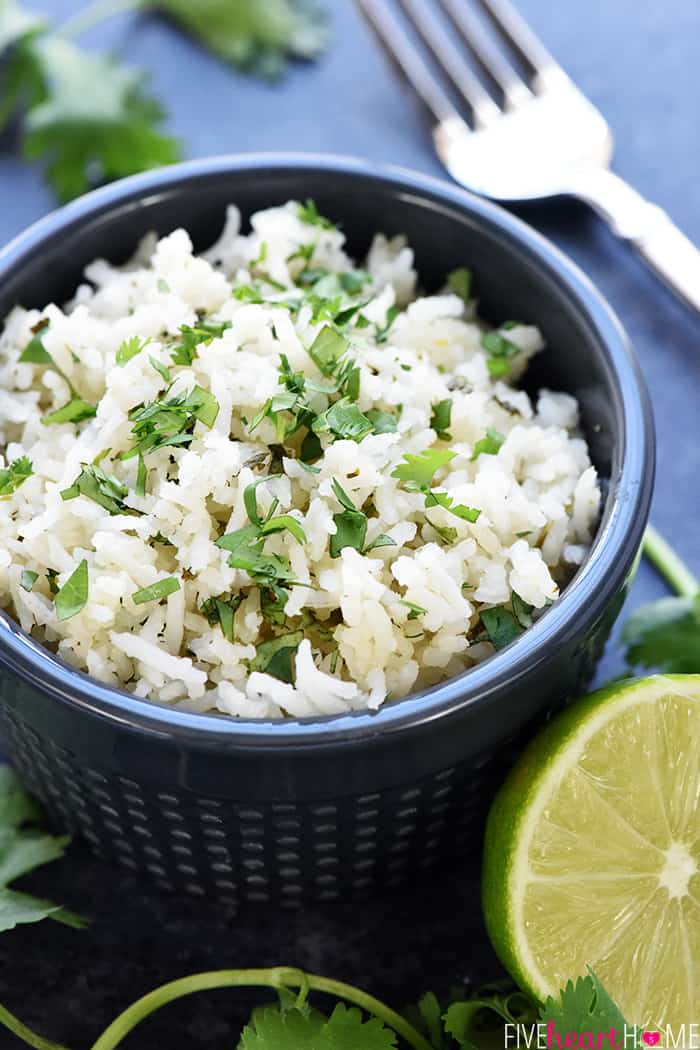 I did learn that cilantro will turn brown after it sits in hot rice for awhile, regardless of anything else. So allowing the rice to cool just a bit before stirring in the cilantro – and serving the dish immediately – will help retain that lovely shade o’ green. Sprinkling extra cilantro on top is a nice touch, too.

What Kind of Rice to Use

The other nice thing about this recipe is that you’re not limited to one kind of rice… you can use your favorite variety: basmati, jasmine, or even more wholesome long-grain brown rice. Just use the package directions as a guide for cooking time. After all, the fun begins after the rice is perfectly cooked! 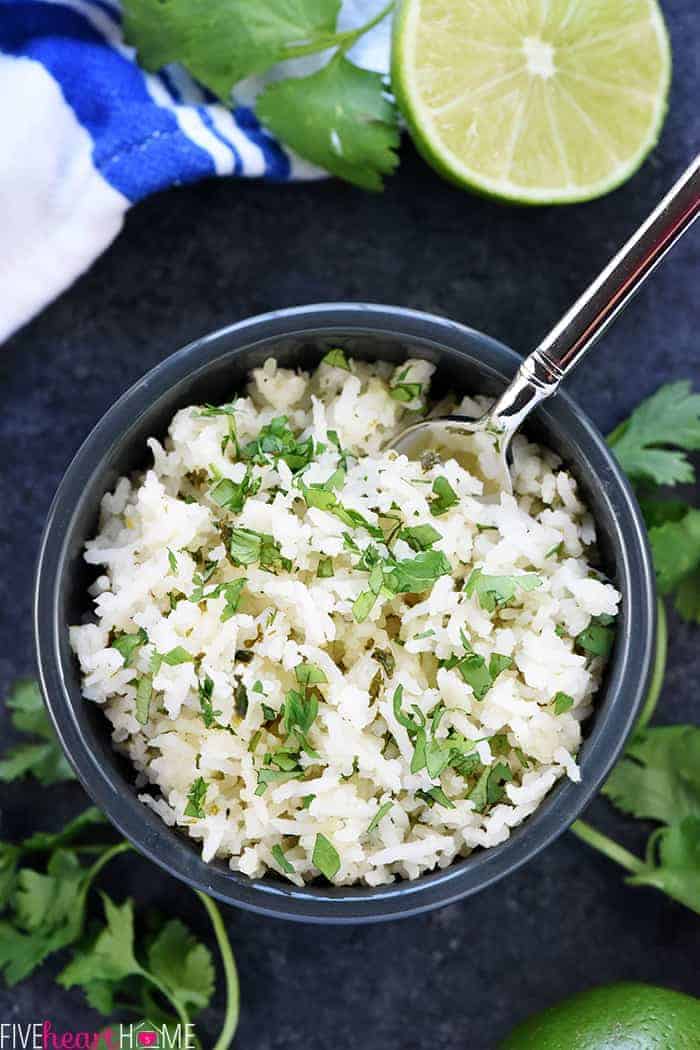 So whether you're a FreeBirds fan...or a Chipotle fan...or a burrito/burrito bowl fan...or a general Mexican/Tex-Mex food fan...Cilantro Lime Rice will make a tasty addition to your recipe box. Enjoy! 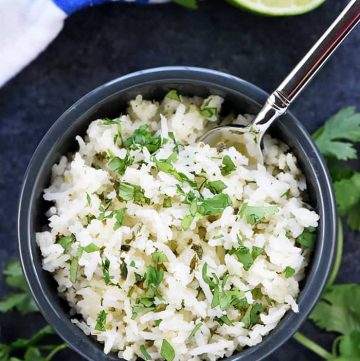 With just a handful of ingredients, Cilantro Lime Rice is the perfect base for burrito bowls or a delicious side for all of your favorite Mexican recipes!
Print Pin Rate
Course: Side Dish
Cuisine: Mexican
Prep Time: 5 minutes
Cook Time: 20 minutes
Total Time: 25 minutes
Servings: 4 to 6 servings
Calories: 231kcal
Author: Samantha Skaggs