Pineapple is already pretty perfect just the way it is. But would anyone protest if you topped it with a crumble of coconut, gingersnaps, and macadamia nuts, drizzled it with vanilla-infused coconut milk, and then popped it in the oven until it was all hot and bubbly? 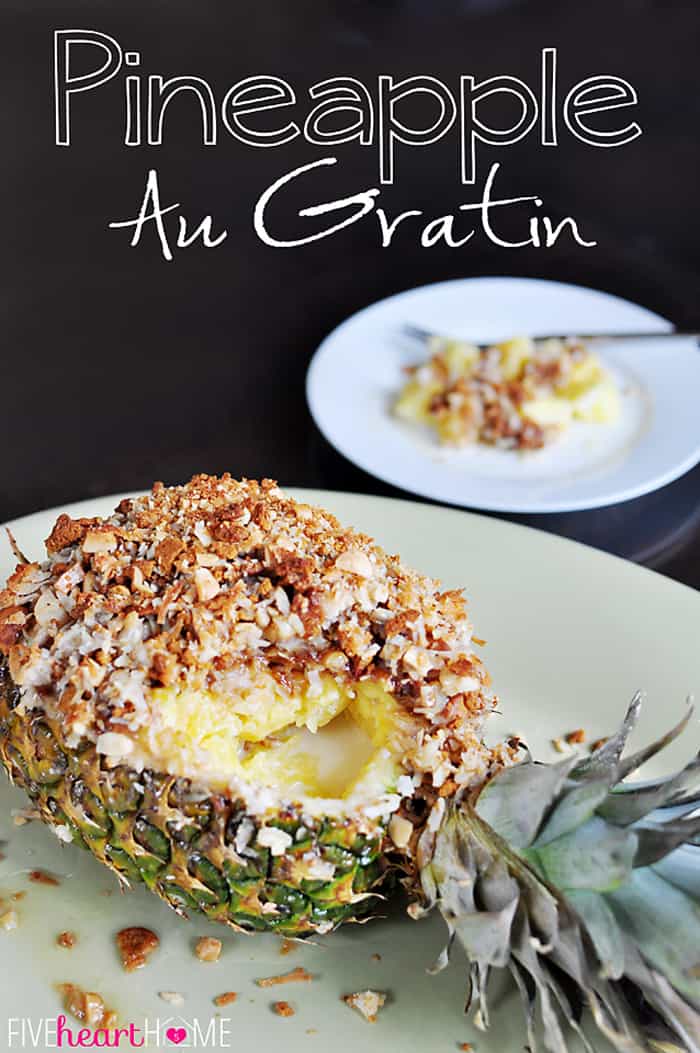 Nope. I didn’t think so. Say hello to my new favorite summertime dessert (well, along with this one, of course).

My boys are always begging for a little “treat” to top off dinner, but I try not to let a sugary dessert become a daily affair. But hey, we’re talking about fruit here, right? This sweet treat comes without all of the guilt. It ends up being healthier than most desserts (containing only a small amount of added sugar, relatively speaking…and coconut milk is good for you, remember?), yet it’s certainly not lacking in the flavor department. 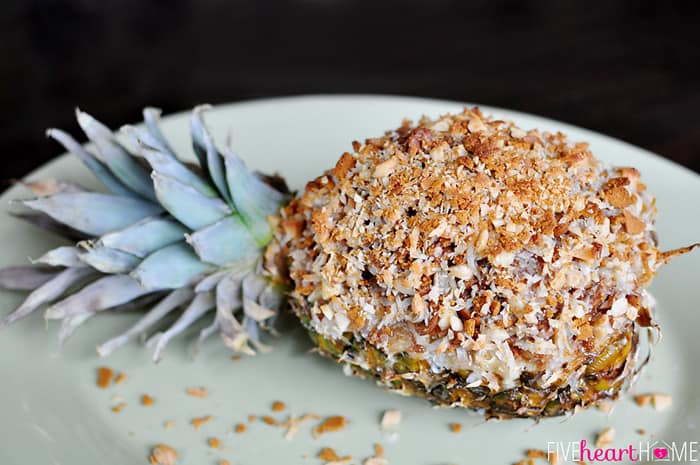 This over-the-top pineapple was inspired by a recipe I saw on Pinterest awhile back, which traces back to a gem from Bon Appétit. It originally called for sweetened condensed milk, which I decided to swap out for coconut milk in hopes of a nice piña colada-esque end result. Also, as good as the dark rum sounded per the original recipe, I figured I probably better sub some vanilla extract instead, seeing as how I’d be serving this to my young children and I strive to be all responsible-like. But don’t kid yourself…I’ll be trying the rum-laced version on some later occasion.

The final verdict? Pretty darn good. I’ve always been a fan of warm pineapple (grilled on kebabs, paired with Canadian bacon on pizza, etc. etc.), but if you’re not, you could certainly allow this concoction to cool off before serving. Regardless of temperature, the pineapple juice mingling with the coconut milk is reminiscent of my favorite poolside umbrella drink, and the topping is gooey and chewy in some places and crunchy in others with a gingery bite that’s countered by the salt from the macadamia nuts. In summary? YUMMY. If you like pineapple, it’s a must-try. If you don’t like pineapple, this recipe just might change your mind. 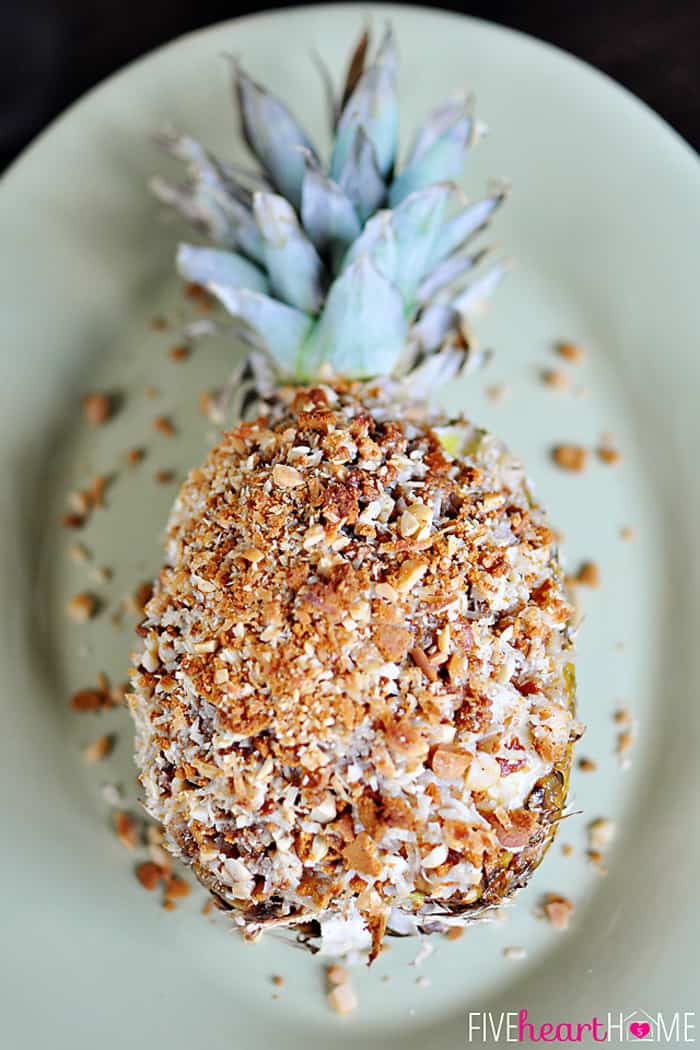 Preparing it is pretty quick and easy as well.  I don’t usually include step-by-step photos with my recipes, but I think they might help illustrate the pineapple-prepping directions in this case.

Slice your pineapple from top to bottom but a little off center, so that your resulting two pieces are more like 1/3 and 2/3 as opposed to perfect halves. 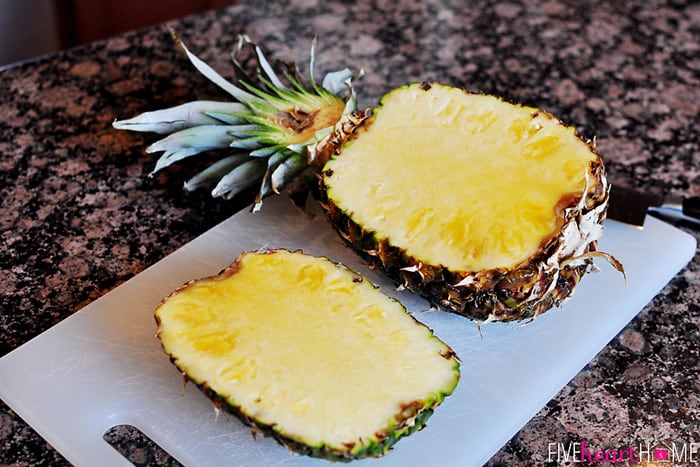 Use a small, sharp knife to very carefully remove the core from the larger side.  Odds are you missed the core altogether when you sliced off the smaller piece, but if not, remove any remnants there as well. 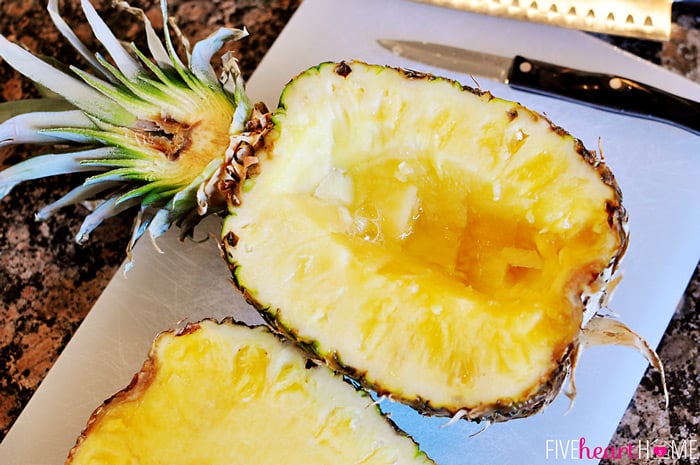 Now you’re going to cut all of the pineapple flesh into chunks while reserving a “shell.” For the smaller side, that means slicing off the skin and chopping up the pineapple, and for the larger side, you’ll need to carefully remove chunks of pineapple using a small knife while preserving the outermost layer. Work slowly so as to keep all of your fingers intact and don’t worry if your resulting pineapple chunks and pieces are less-than-uniform.

When I got down to the bottom of my pineapple shell, I had the lofty goal of avoiding a trip to the ER for stitches. So I decided it might be a smart idea to ditch the knife I had been using in favor of the serrated end of a melon baller to shred/scoop the remaining pineapple. It ended up having more of a crushed pineapple consistency, but like I said before, that doesn’t really matter. The pineapple pieces get hidden by the topping, so the main objective here is to loosen the pineapple from the shell to make serving later that much easier. 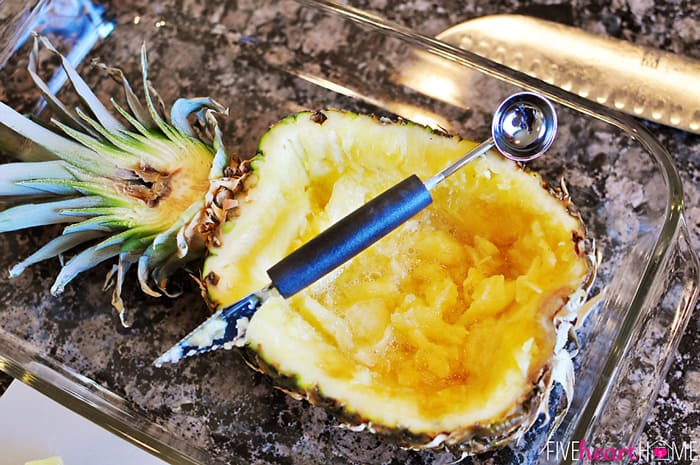 Once all of your pineapple is chopped up, pile it back into your hollowed out shell, packing it in there as firmly as possible.

Drizzle with half of your coconut milk mixture and then carefully mound your topping all over the pineapple, pressing it down so that it adheres to the milk. Slowly pour the rest of the coconut milk over the topping, allowing it time to soak in rather than run straight down the sides, and you’re all set to bake this baby! 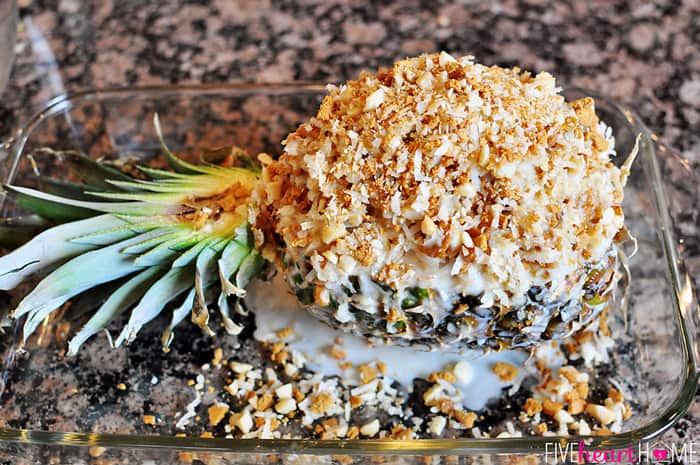 Now you’re going to have to wait a long half hour or so until…TA-DAAA!!! Pineapple perfection. 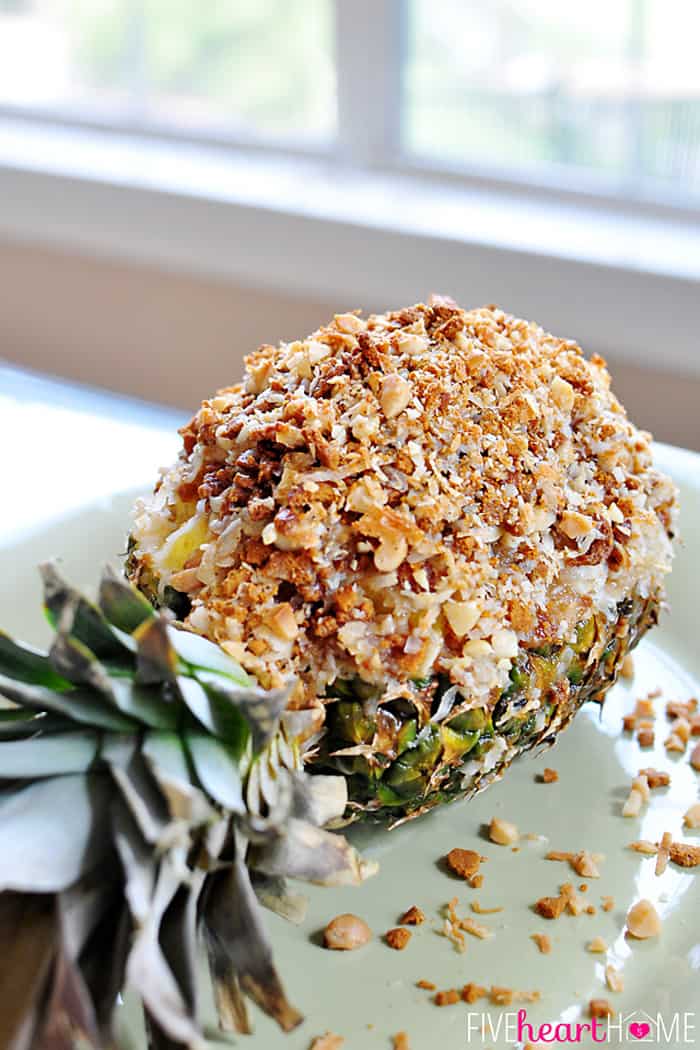 This is a really fun, unique, summery treat, sure to please your family, impress your guests, and transport anyone who tastes it to a tropical paradise. And what more can you ask of a dessert than that?

A halved pineapple is topped with a layer of coconut, crushed gingersnaps, and macadamia nuts, drizzled with vanilla-laced coconut milk, and then baked until hot and bubbly for a treat that's gooey and crunchy at the same time.

If you wish, you may substitute 1/2 cup sweetened condensed milk for the coconut milk.

For a boozy pineapple dessert, substitute 2 tablespoons dark rum for the vanilla extract.