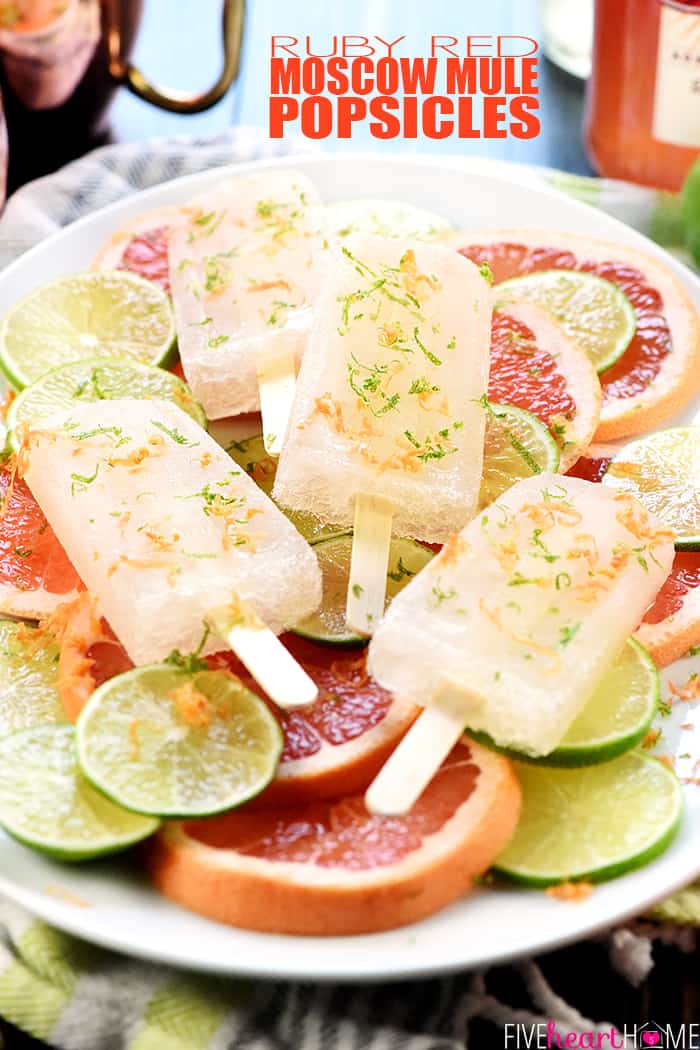 I'm admittedly late to the whole Moscow Mule party. But, having finally arrived, I'm now obsessed with all things Moscow Mule and making up for lost time. 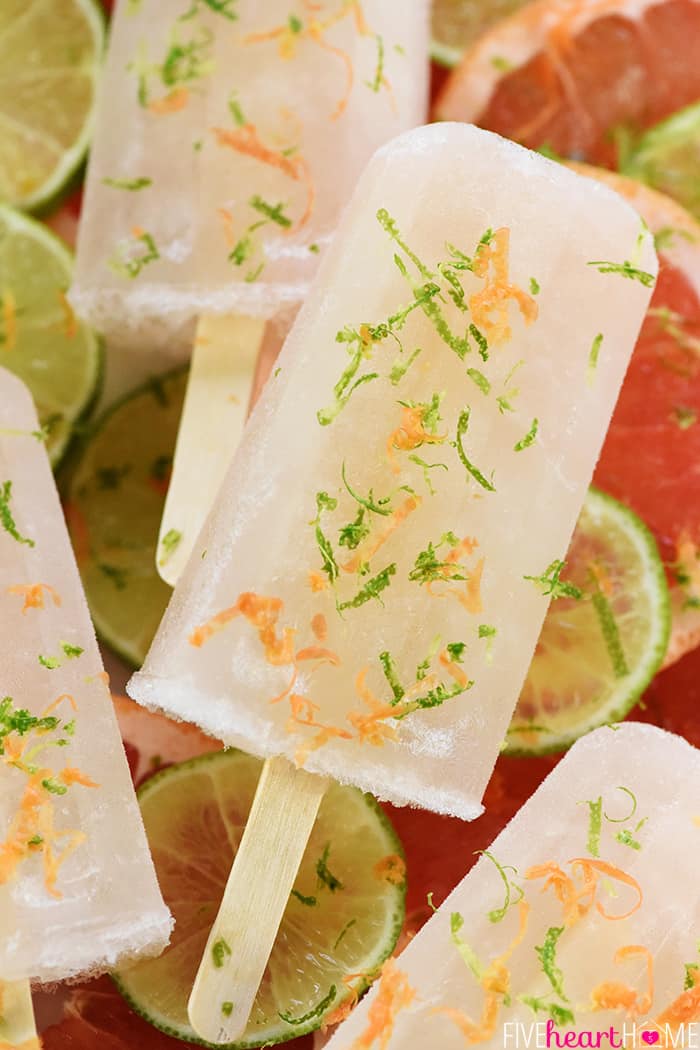 If I'm out somewhere and there's a version on the drink menu, I try it. A Ruby Red Moscow Mule at a party last spring, a Sake Moscow Mule at the sushi restaurant on our anniversary, a Moscow Mule Margarita on my recent trip to Canada... 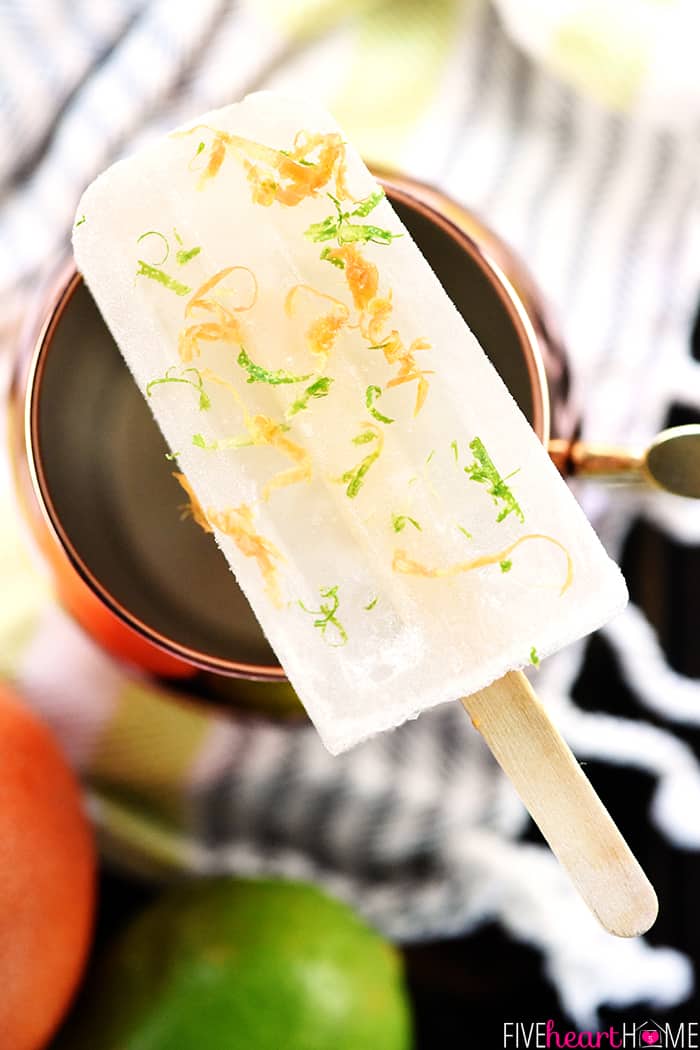 So doesn't it make sense that I've decided to turn my favorite new cocktail into an irresistible summer treat?

These boozy Ruby Red Moscow Mules Popsicles are frosty and fizzy and downright delectable. And all you need to make them?

The sweet and zingy combination of flavors has summer written all over it! 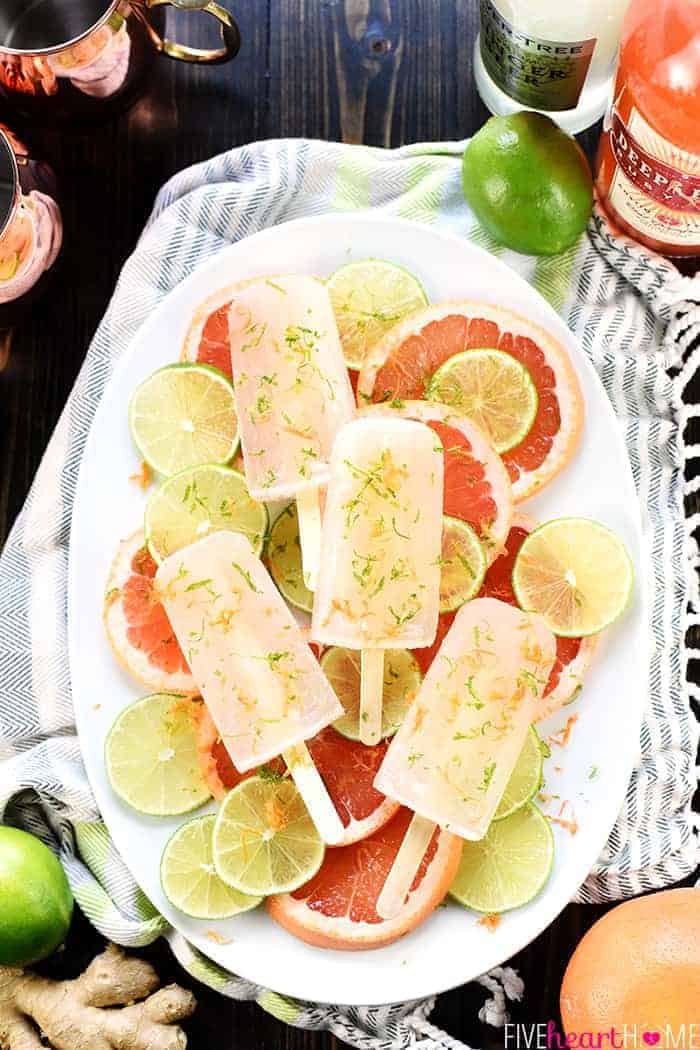 You could certainly make these popsicles with plain ol' regular vodka. But since we usually keep a bottle of ruby red vodka in the liquor cabinet (I'm partial to Deep Eddy), I decided to experiment with it for these popsicles. Ruby red vodka has a gorgeous color and a lovely flavor, which I think only adds to these ice pops. 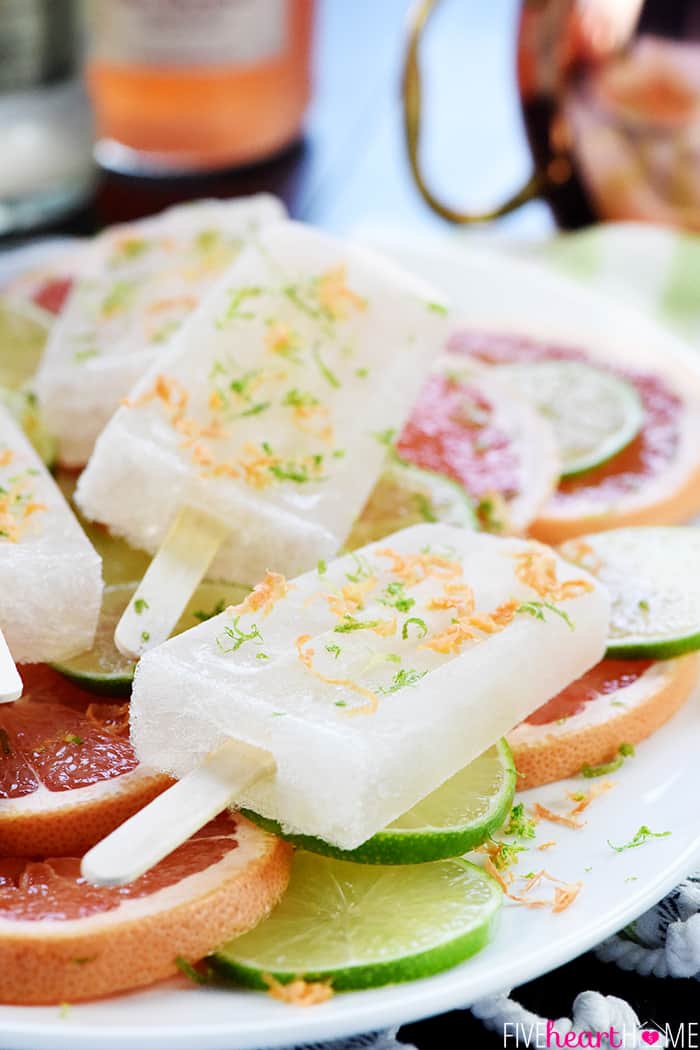 That being said, you can't use too much liquor when you make boozy popsicles, because if you do, they'll stay slushy. I believe I achieved the perfect ratio of vodka to get these popsicles to freeze solid while still keeping them true to their namesake cocktail. 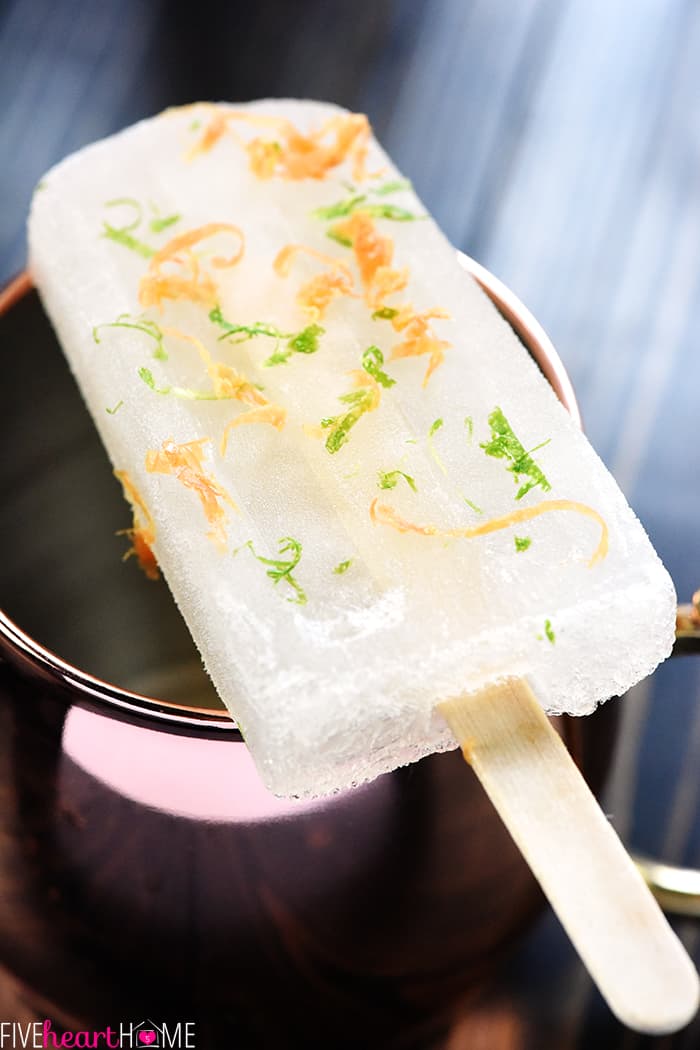 A Special Kind of Simple Syrup...

But since they don't contain as much vodka as a regular Moscow Mule, I resolved to kick up the ruby red grapefruit aspect even more by making a grapefruit simple syrup.

(Incidentally, ginger beer is not actually beer and does not actually contain any alcohol, which is why its ratio doesn't affect the solidity of these popsicles.) 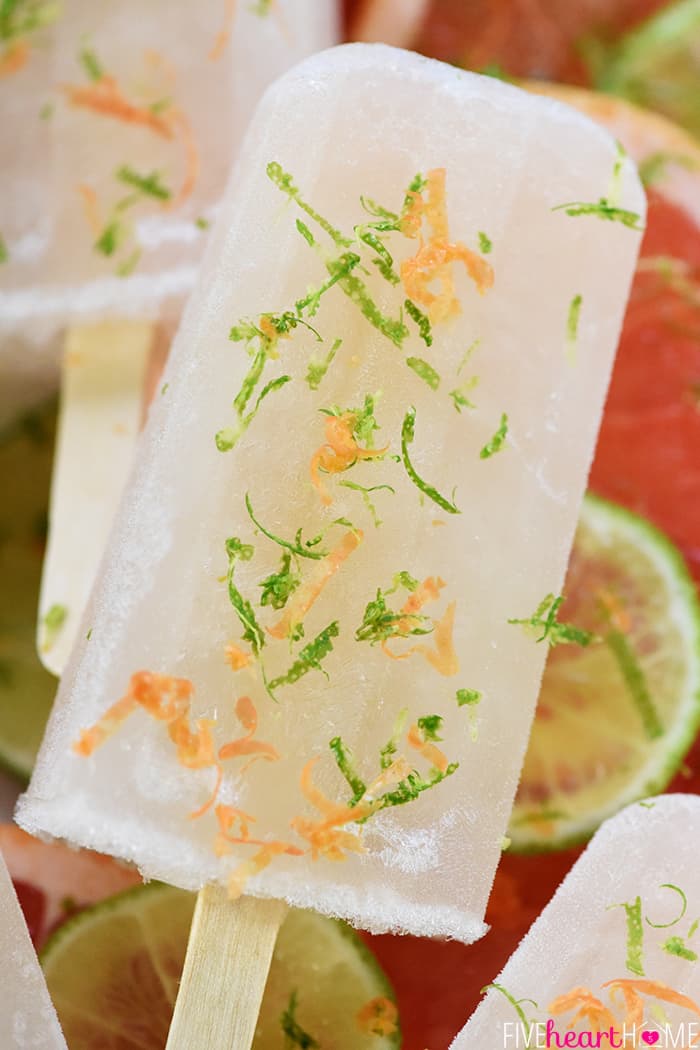 Just remember that the quality of your ingredients is going to affect the final flavor of your Ruby Red Moscow Mule Popsicles. Natural ginger beer, good quality liquor, and fresh-squeezed juices are going to make these popsicles all the tastier. 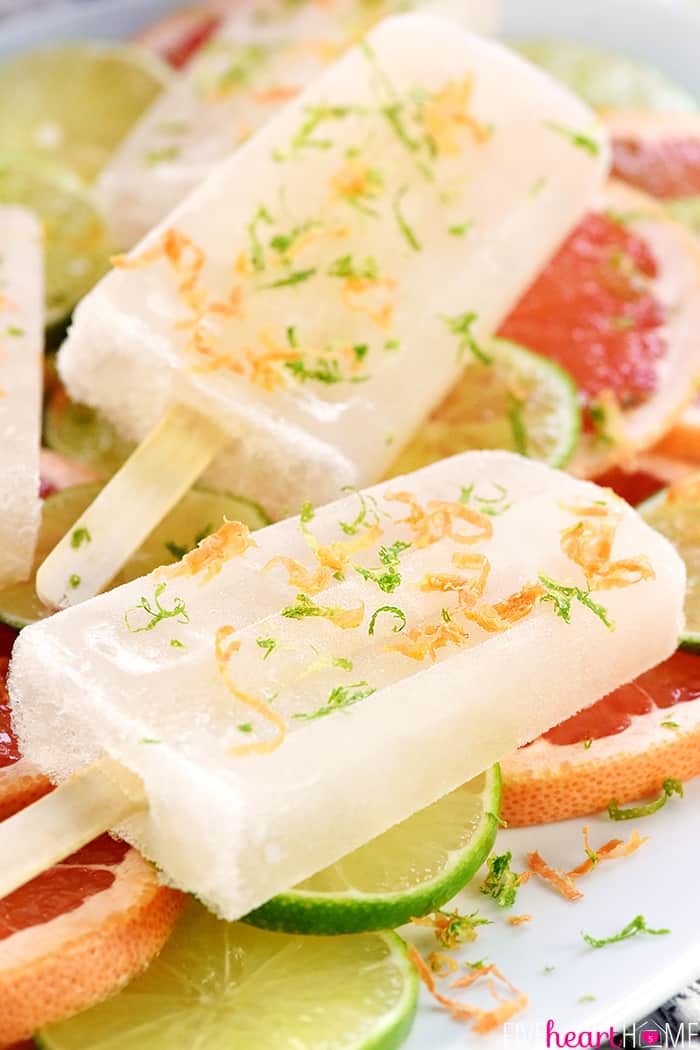 When my kids saw me making popsicles, they asked if I had to take blog pictures before they could have one.

Sorry, kids, but these Ruby Red Moscow Mule Popsicles are for the grown-ups.

Because sometimes we deserve a special treat on a hot summer day...or after y'all go to bed! 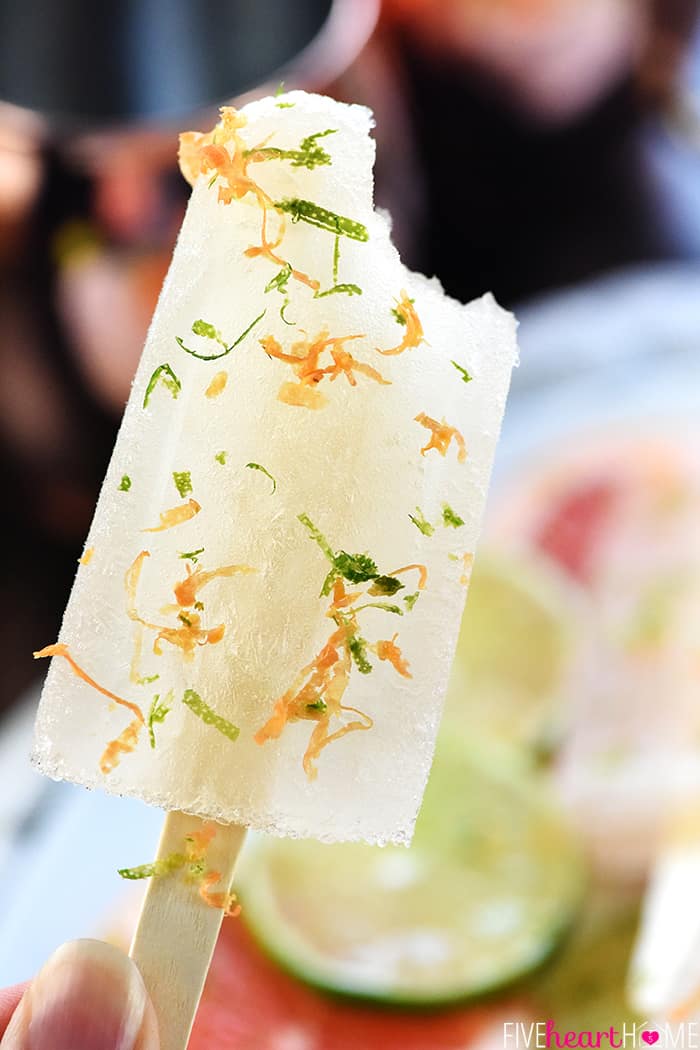 I apologize for oversharing photos in this post, but I'm rather partial to how these pretty, tasty little popsicles turned out. If you're a Moscow Mule fan, I'd consider them a must-make this summer! And if you have yet to try a MM, these Ruby Red Moscow Mule Popsicles would be a great place to start. Stay cool, have fun, and ENJOY! 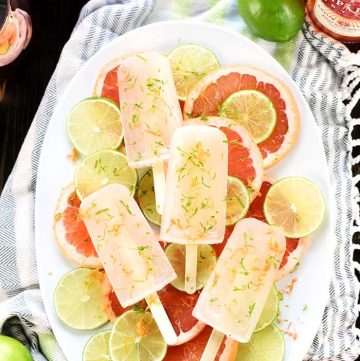