Slow Cooker Brown Sugar Ham is flavored with pineapple juice and a brown sugar glaze featuring Dijon, balsamic vinegar, and honey for an easy holiday dinner from the crock pot!

Several years ago, I had the epiphany to cook my Easter ham in the slow cooker. Let me just tell you…it’s one of the most brilliant holiday cooking decisions I’ve ever made! You know how when you’re preparing a holiday meal, oven space is at a prime because there are a ton of extra side dishes to cook, not to mention homemade rolls, desserts, etc.? Well, it’s always nice to ensure that some of your dishes don’t rely on said oven!

This can be the case whether you make them ahead of time, cook them on the stove, or — better yet — throw them in the slow cooker. And as you may have already surmised, this ham recipe falls into the latter category. And it’s so mouth-watering-ly delicious, you may never want to cook your ham in the oven again! 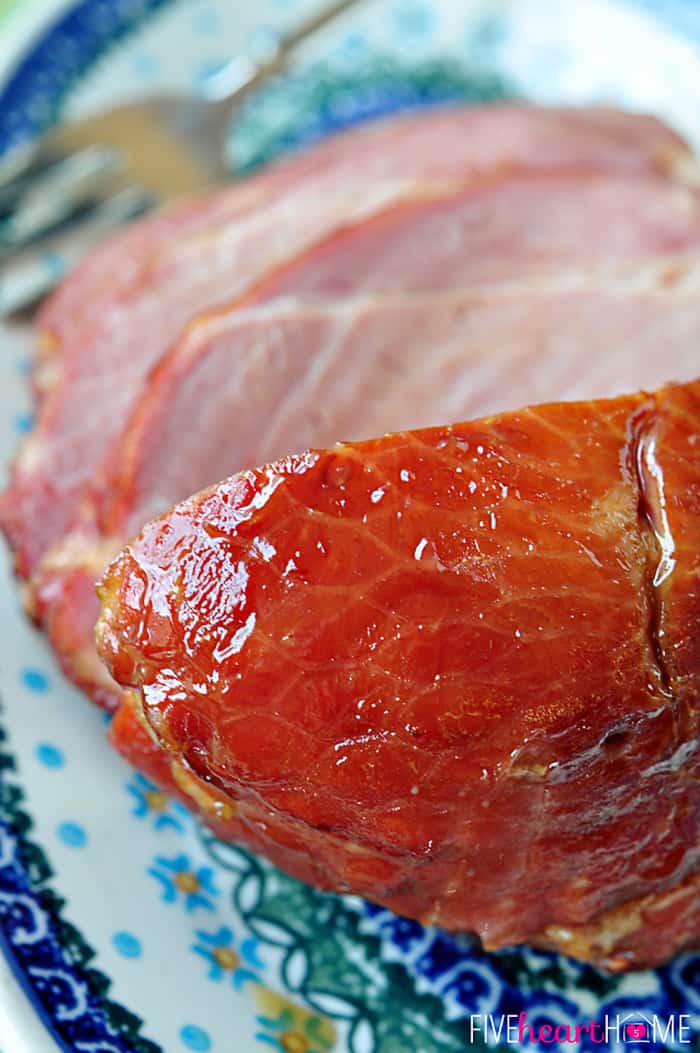 What Kind of Ham Works Best in the Crock Pot?

Here’s the thing about this recipe: it’s very forgiving. It can be adapted to just about any cut and any size of ham (provided you can fit it in the crock pot), boneless or bone-in, whole or spiral-sliced. But of course, all of those factors are going to dictate the ultimate cooking time.

So let’s talk ham. You want to start with a fully cooked ham, and this recipe will simply serve to heat and glaze it. The most standard ham at the grocery store will probably be cured but not smoked, though you can choose cured or uncured, plain or smoked. It’s just a matter of personal preference. (The ham in these photos was actually uncured, which is why it’s a lighter color than deep pink, cured ham.) And if your ham includes a flavor/glaze packet, or if it has a plastic cap over the end of the bone, be sure to discard those before cooking! 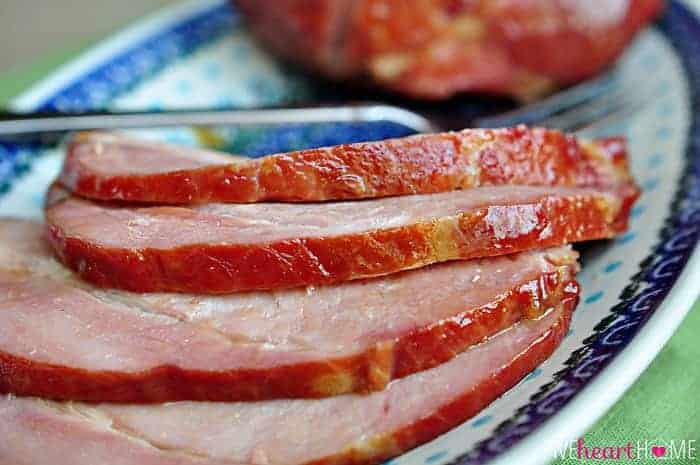 What Size Do I Need?

The size of ham you buy depends on how many people you are going to feed. You can go with a large ham for a big group. Or I’ve halved this recipe and reduced the cooking time to use as small as a 2-pound petite ham half as an everyday, weeknight meal for my family (of two adults and three young children).

I would recommend up to an 8-pound ham as the size that will most readily fit in a large (7- to 8-quart), oval crock pot. But of course, that also depends on the shape of the ham. If you put your ham in the crock pot and it extends in a way that the lid won’t fit snugly, you have two choices. You can either trim off a piece of your ham to make it fit, or use a triple layer of heavy-duty foil to cover the slow cooker with a tight seal (and then I’d still try to lay the lid on top). Just beware of hot steam when you remove the foil!

How Long Does It Take to Bake a Fully Cooked Ham?

The FDA recommends reheating a fully-cooked ham to 140°F. A very small ham may reach that point in a slow cooker set to low within 2 to 3 hours. A large ham should be to that temperature by 4 to 6 hours on low. Just keep in mind that each time you remove the crock pot’s lid, you may have to compensate for lost heat with a bit of additional cooking time.

As with most cuts of meat, a bone-in ham is likelier to stay juicy, but boneless will work, too. And while a sprial-cut ham is convenient for serving and certainly adapts to this recipe, beware that it may dry out a bit faster than a whole, uncut ham. You can always baste all over the spiral slices a few times throughout the cooking process. You can also slightly reduce the cooking time as compared to an unsliced ham to ensure a moist final product. 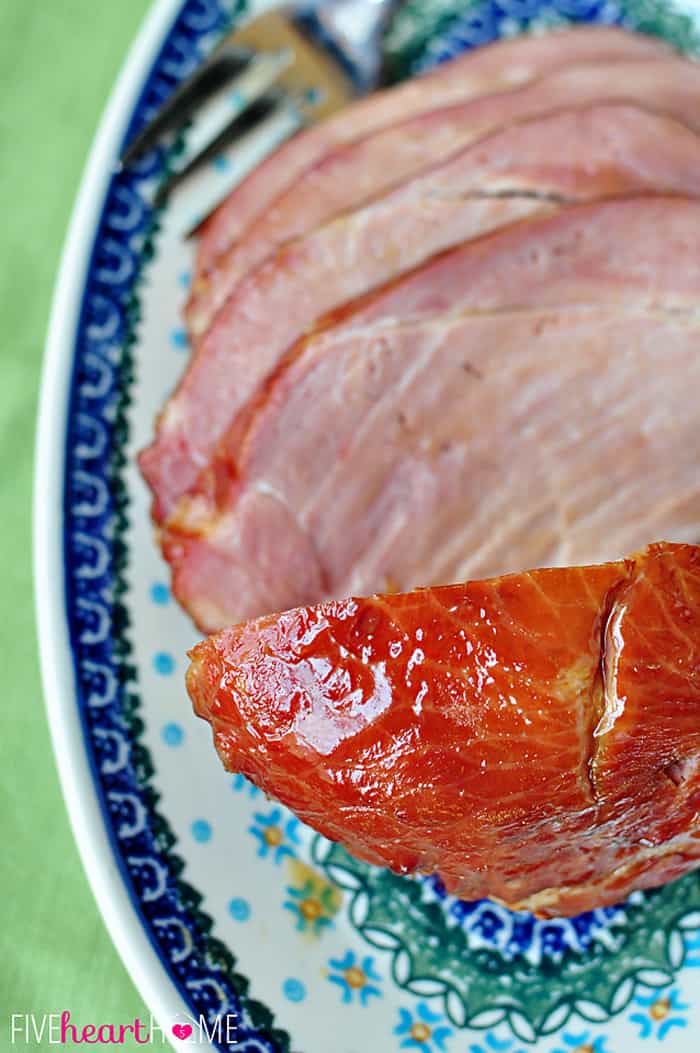 How to Make Crock Pot Ham

Okey-doke…that should pretty much cover the nitty gritty details. Now onto the yummy part of this recipe! I happen to think that the flavors of ham and pineapple are a match made in heaven. But if you don’t care for pineapple juice, you can easily sub apple juice or orange juice instead.

After pouring the juice into the bottom of your slow cooker, simply coat your entire ham with a paste made of brown sugar, balsamic vinegar, Dijon mustard, and honey. These ingredients melt down into the most tantalizing glaze, which you later thicken and serve drizzled over the top of the ham. The glaze is honestly my favorite part of this recipe…yum doesn’t even begin to describe it. Let’s just say I could eat it with a spoon. 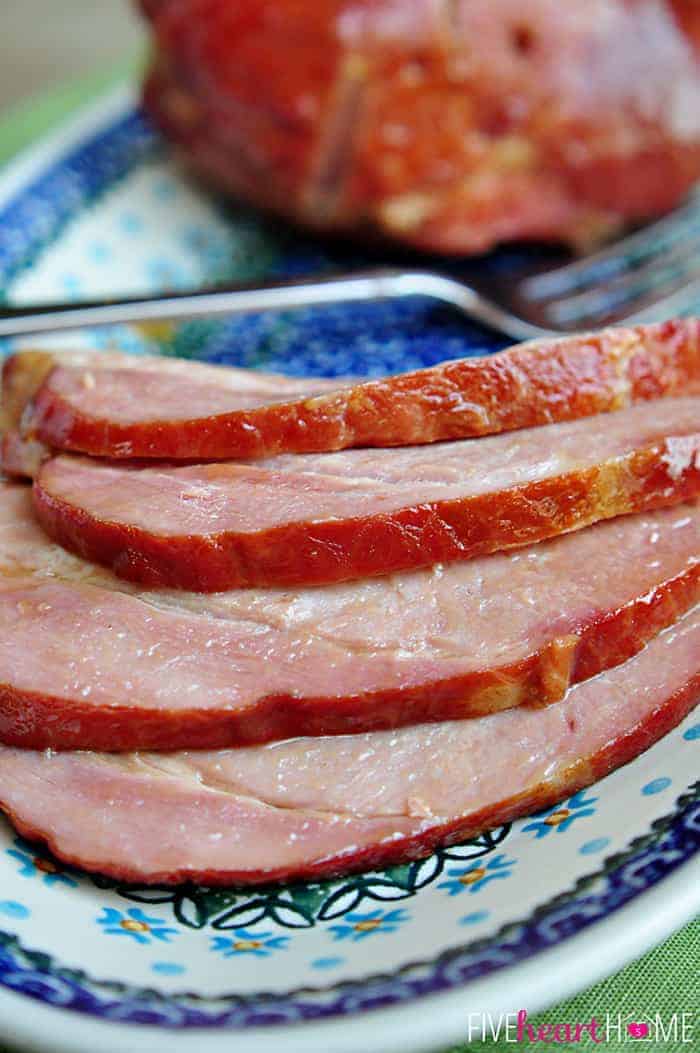 How Do I Make This Crock Pot Ham Without Brown Sugar?

If you like more of a savory ham versus sweet, it’s easy to adapt this recipe. Simply drop both the juice and the brown sugar from your ingredients list. Instead, use a chicken or vegetable broth in the bottom of your slow cooker to ensure the ham stays moist while it cooks.

For the rub, double the mustard and add the vinegar and the honey (you can handle a leeetle bit of sweetness, right?). If you like, you can also add crushed black peppercorns, minced garlic, and/or a little white wine to the mix as well. Mix and rub this all over the ham as instructed. Follow the directions for cooking times.

(some affiliate links below)

Using a slow cooker is truly the easiest, most delicious way to cook a ham. I look forward to making it this way every time Easter and Christmas roll around! I also use this technique with a small ham for an effortless dinner throughout the year. This is a great recipe to have in your arsenal, so I hope you have a chance to try soon. (*cough* like this Easter *cough*) And I hope it’s a big hit if you do! 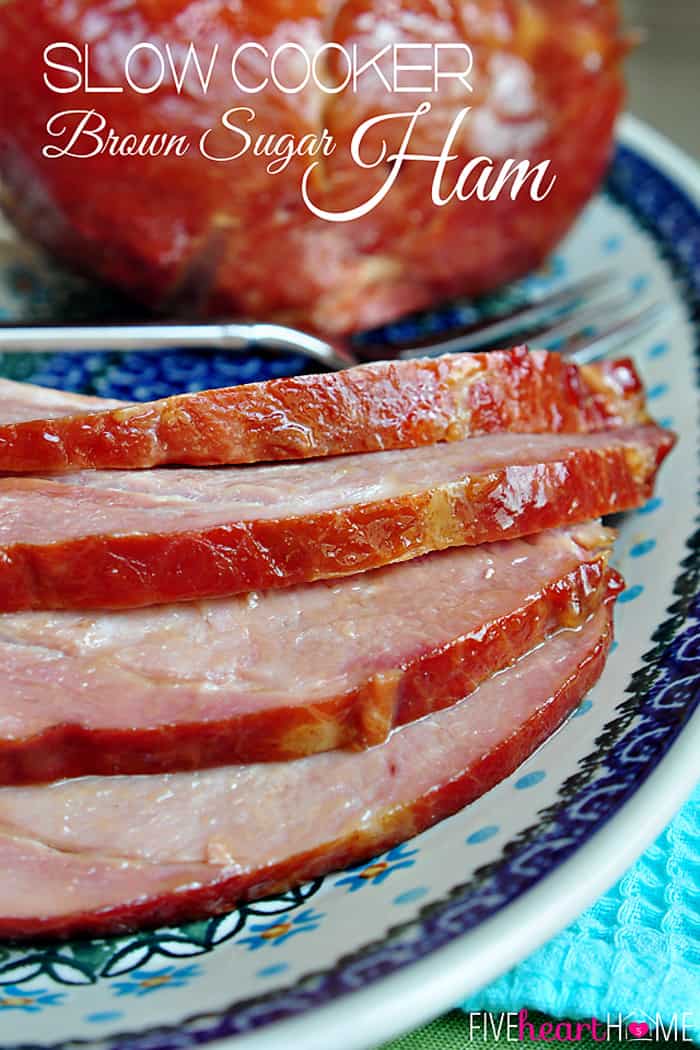 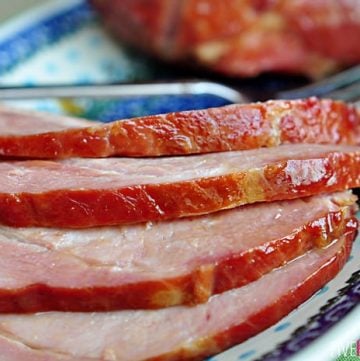 Holiday Side Dishes for Ham