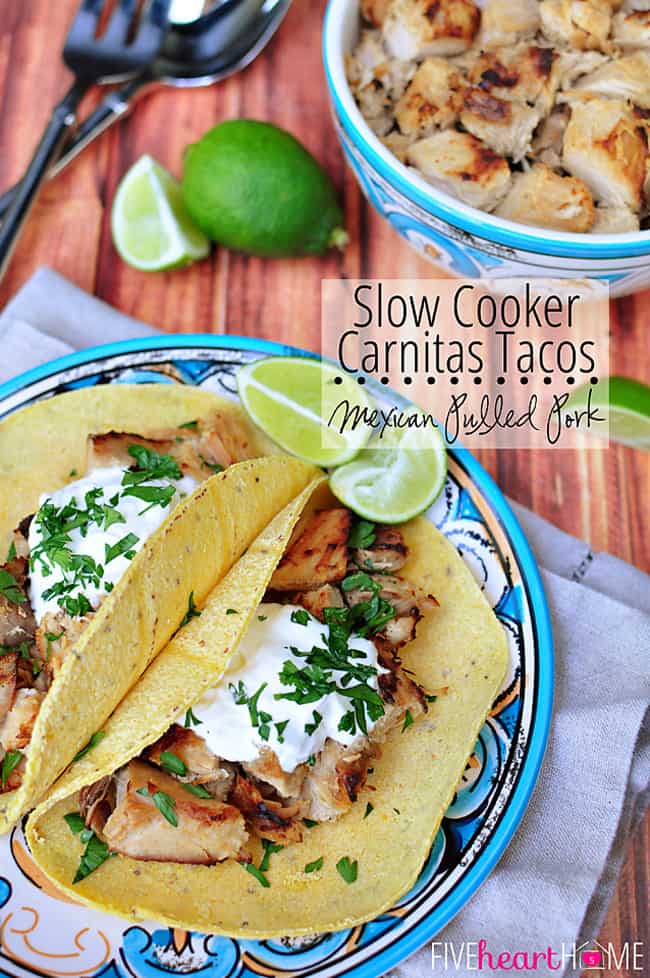 Carnitas Tacos come together in a slow cooker where pork is braised in an aromatic broth, cubed, and finished off under the broiler, resulting in succulent, caramelized carnitas that are delicious in tacos or as a filling for burritos, enchiladas, quesadillas, and more!

I've officially decided that May is one of the best months of the year. Spring is in full swing with the promise of summer beckoning, but before the excruciating heat sets in (yet). The school year is winding down and thoughts are turning to camps, swimming, vacation plans, and no more school lunches to pack for the immediate future (can I hear an AMEN?!). And on the 5th of May, we get to gorge ourselves on all of our favorite Mexican cuisine and beverages in observance of Cinco de Mayo! 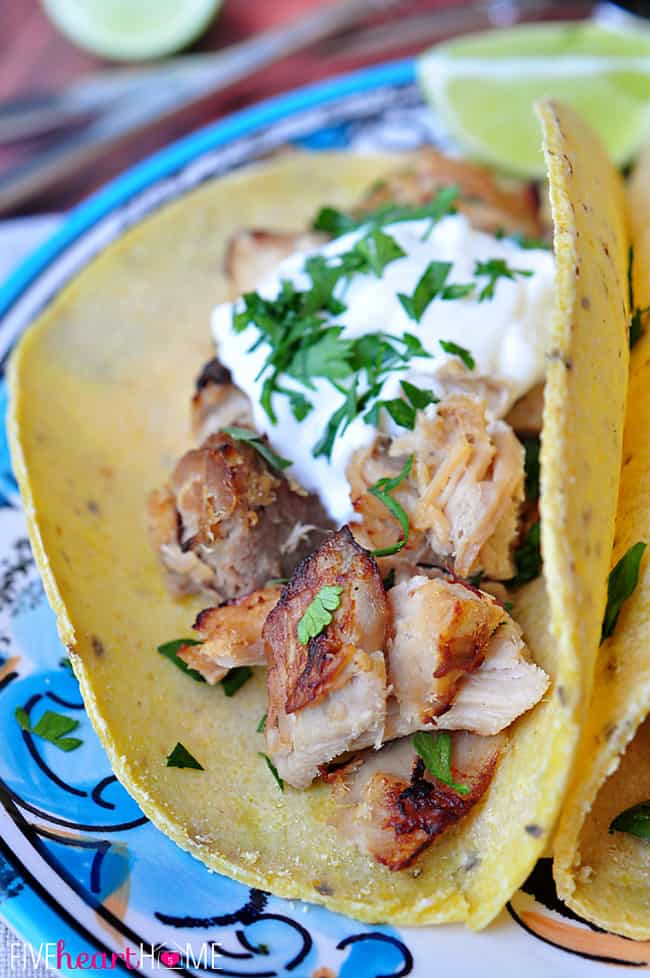 Now I already waxed poetic about Cinco de Mayo the other day, and I believe we established my love of Mexican food (or around here, Tex-Mex) long ago. So what say I curtail the chit chat and get on with the recipe?

Y'all know I love a good crock pot dinner, and this is a newer one in my repertoire. I've already shared my family favorite Slow Cooker Chicken and Black Bean Tacos, but today I have a different spin on tacos for you. 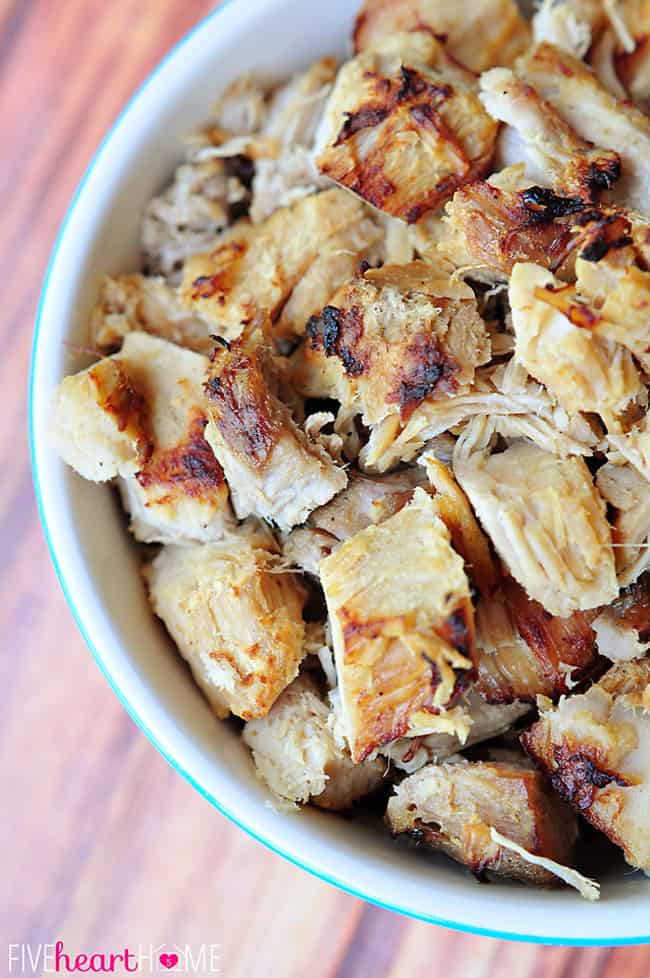 Slow Cooker Carnitas Tacos is a Mexican dish that involves chunks of tender, braised pork that are then crisped up in a frying pan or under the broiler. The resulting shredded meat can be used to stuff tacos, top tostadas, fill burritos, etc., etc.

Cooking the pork in the slow cooker is essentially effortless. However, I still recommend taking a few additional minutes to complete the final step of caramelizing after crock potting, which sets carnitas apart from regular ol' pulled pork.

While you could certainly just shred up your slow cooked pork and call it a day, spreading it out on a sheet pan and broiling it for a few minutes (along with some of the reduced cooking liquid) makes for an even more delicious final result. 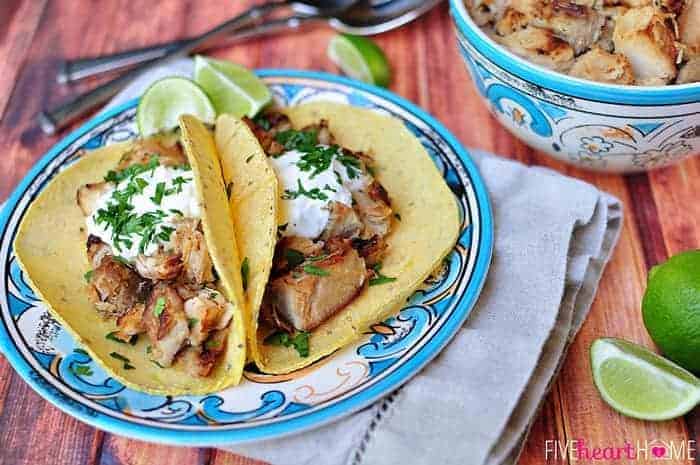 The main ingredients in this crockpot carnitas recipe is obviously pork...specifically pork butt, AKA shoulder roast.

But speaking of the cooking liquid, it happens to be full of aromatics, including plenty of garlic as well as a whole orange. It also includes a whole onion and, as my longtime friends and family members (and some of my dear readers, by now) can attest, I loathe onions. As in, seriously detest them. So consider it a culinary sacrifice that I decided to try out this recipe with a real, actual onion. I didn't even know how to peel and cut the dang thing, and the only reason I went out on a limb here is because I knew I'd be fishing out the whole onion before commencing with the final dish.

But what do you know? The pork ended up having great flavor, and I didn't even taste the onion. I supposed my taste buds may finally be growing up! Perhaps in about 50 more years I'll be able to bite into a piece of onion without gagging. 😉

In addition to the pork and aromatics, this recipe also includes lime juice, cumin, dried oregano, and bay leaves for flavor, flavor, FLAVOR! 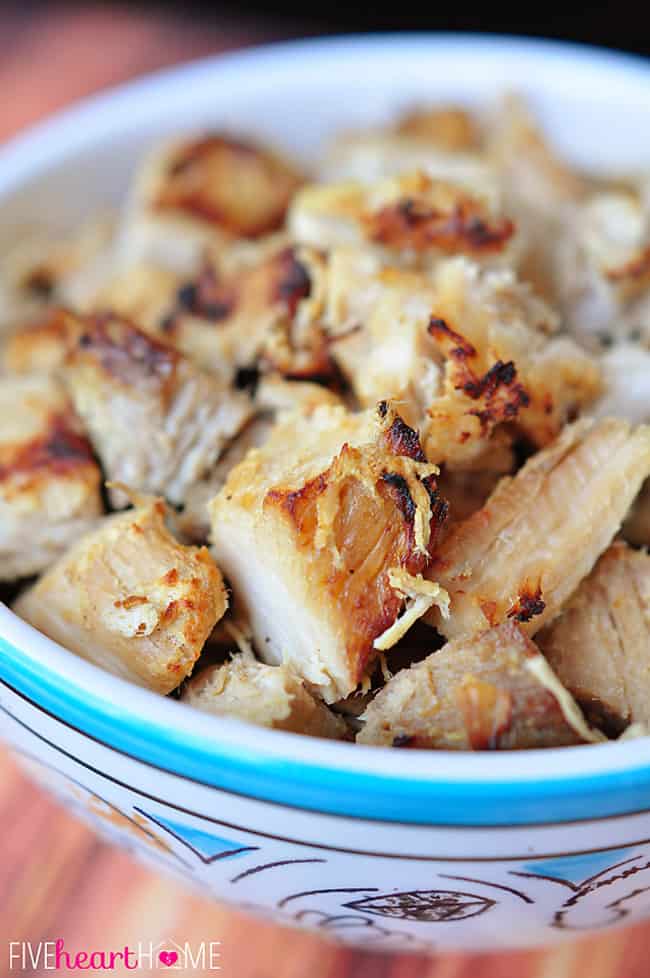 Now back to the recipe! You can gussy up these tacos in any way you like.

Along the same lines, I used corn tortillas here, but flour tortillas would also be tasty.

Tacos are very personal...adorn them as you see fit. 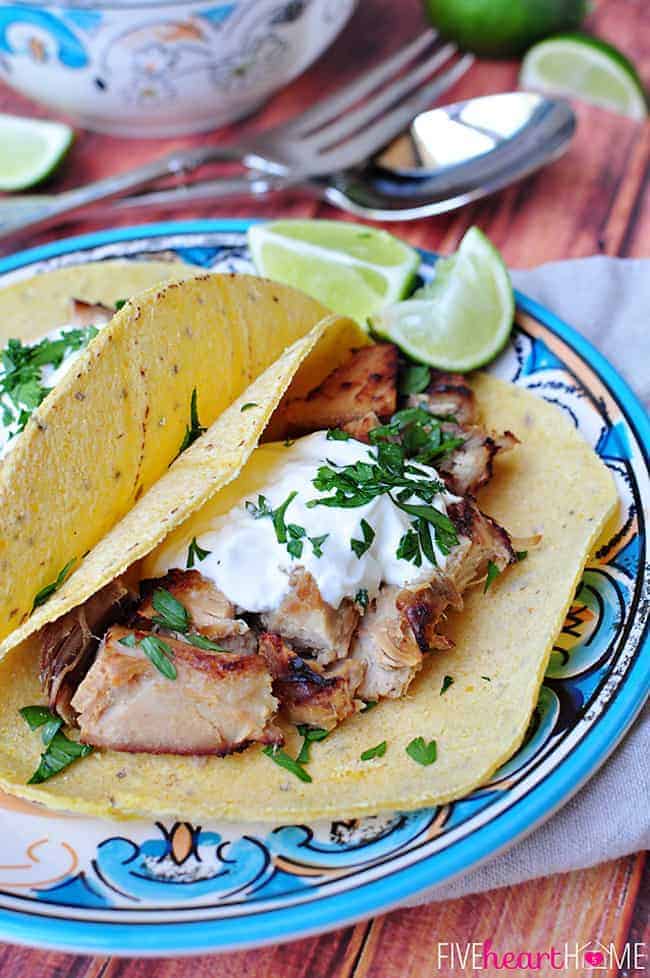 Whether you decide to try out these tacos for Cinco de Mayo or whether Mexican entrees are a staple at your house all year long, I hope you'll keep these pork carnitas in mind for your next taco night. Give them a try, peeps...you'll be happy you did! 🙂

To Accompany Your Tacos 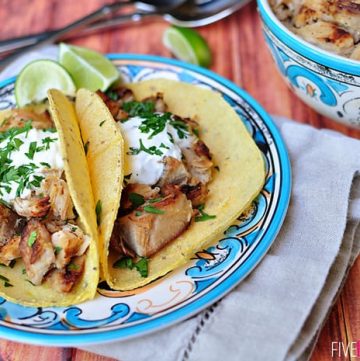