This bread, y’all. This bread. I titled this Whole Wheat Bread recipe “the BEST” and I’m not even exaggerating here. I’ve baked many a whole wheat bread recipe over the years, and this one is head-and-shoulders above the rest.

Hundreds of raving comments (since I first published this recipe six years ago) can’t be wrong…right?! So I decided to update this old post with tons of additional information and tips to help ensure your bread making success!

Here’s the deal…what makes this bread so amazing is that it stays soft and fresh for days after it’s been baked.

Just about all homemade bread tastes fabulous fresh out of the oven. But then whatever isn’t initially eaten tends to dry out a bit as the days stretch on, particularly in the case of wheat bread.

But this bread is just as good on the third day (if it lasts that long!) as it was on the first. Seriously! I wouldn’t believe it if I hadn’t experienced it first hand myself. It’s like store-bought, stay-soft bread without the preservatives. Forgive me for going all Scarlett O’Hara on you, but as God is my witness, I’ll never make another whole wheat bread recipe again! 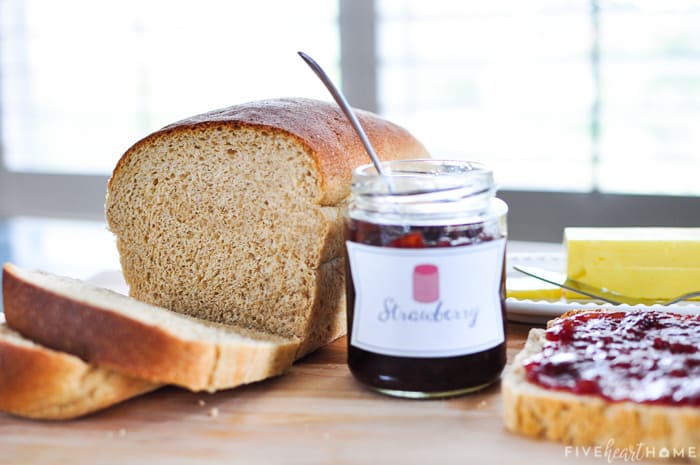 One of my bread making tricks is that I like to use white whole wheat flour when I make bread. Even though it has the word “white” in its title, this flour is 100% whole wheat.

Not only does this whole wheat bread turn out better than most, but the recipe is actually simpler to make than most! Some of the steps may seem a bit unconventional to an experienced bread maker. But if you give this recipe a chance, I think you’ll be pleased with the results.

And that’s it. One step at a time…you can do this!

Let’s talk about step #2 for a moment, shall we? I believe that the biggest factor that makes this bread stay so soft and fresh is the step in the recipe calling for you to make a sponge.  Now I’m not talking about the kind of sponge you keep by your kitchen sink.  In bread making, a sponge is a very moist dough that just begins to rise as it gives the yeast a head start.  After it’s had some time to do its magic, you add more flour and ingredients and proceed with the recipe.  The sponge in this recipe only needs to sit for about 10 minutes. But apparently that’s all it takes to achieve this bread’s wonderful texture.

For optimal results, make this whole wheat bread as directed. However, the recipe will still work (and even turn out great) incorporating a variety of substitutes. Just keep in mind that changing the ingredients may result in a different taste and/or texture in your final loaves. Switching ingredients could also require you to tweak an amount or a step, such as needing to add extra flour and/or kneading a bit longer to achieve the proper dough consistency. But if you’re willing to experiment a bit, people have had success with the following substitutions…

The only difficulty that I ran into the first time I made this bread is that it stuck to my loaf pans, despite the fact that I had generously greased them. Nonstick pans are recommended for this recipe, so if you’ve got ’em, use ’em! But since I prefer baking in my stoneware pans, I figured out a way around not using nonstick.

I grease my pans with coconut oil and then line them with parchment paper, using the coconut oil to adhere the paper to the pan. I find that if I cut a piece of parchment paper the length of each pan and allow it to somewhat stick out the sides, then I only need to cut two small pieces of paper per pan for the ends that remain uncovered. The key is pressing the parchment paper down and smoothing it as much as possible so you don’t end up with a bunch of creases in your bread. 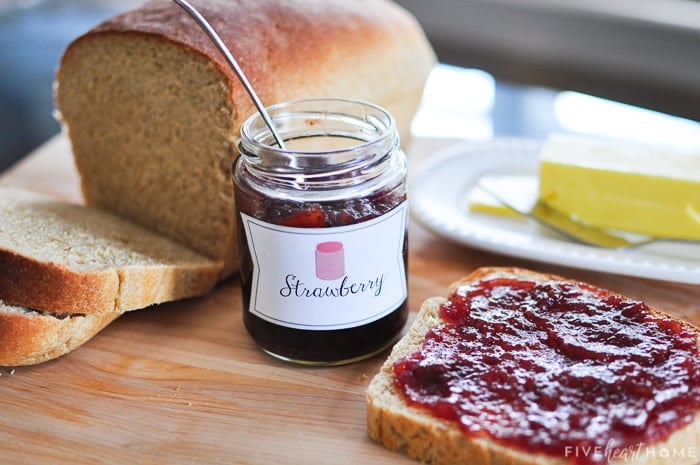 This recipe makes two loaves, so I like to keep one wrapped (I use Glad Press ‘n Seal) and stored in the pantry for eating. The second loaf I keep wrapped up in the refrigerator until we’re ready to enjoy it.

I have a bread box, but I still prefer keeping my loaf wrapped inside of the bread box.  And when I cut off the first slice, I store that end piece pressed against the cut end of the loaf as a kind of “cap” to help prevent it from drying out. When we’re ready for the second loaf, I take it out of the fridge and store it at room temperature in the bread box.

Since this is fresh homemade bread with no preservatives, it will start to mold after several days. So keeping that second loaf in the fridge until we’re ready for it buys us some extra time. You could also successfully freeze the second loaf if you prefer. However, we usually eat it soon/fast enough that refrigerating suffices.

If it takes your family awhile to work through two loaves of bread, another winning alternative would be to give the second loaf away! I mean, who wouldn’t love the thoughtful gesture of freshly-baked homemade bread? 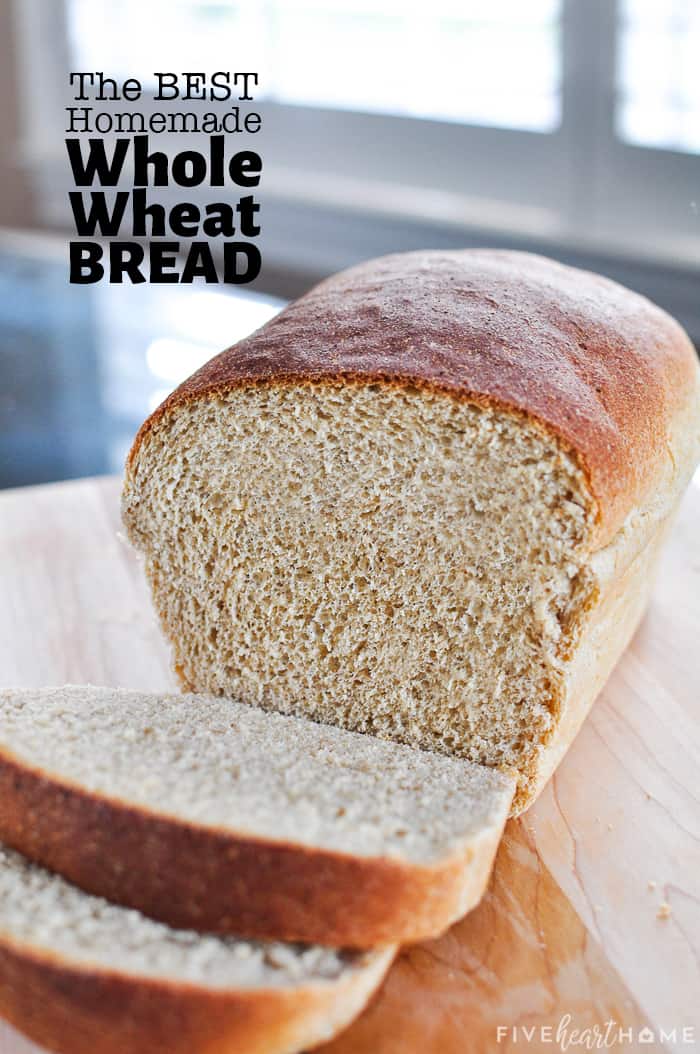 If you have never baked homemade bread before, I encourage you to try it. It may seem intimidating at first and the various steps do take a bit of time, but overall, it truly is easy. And if you are already an expert baker, then I hope you’ll add this recipe to your repertoire!

And psssst…if you happen to love this bread recipe, I actually adapted it to make The Very BEST Whole Wheat Dinner Rolls! Your holiday table won’t be the same without ’em. 😉 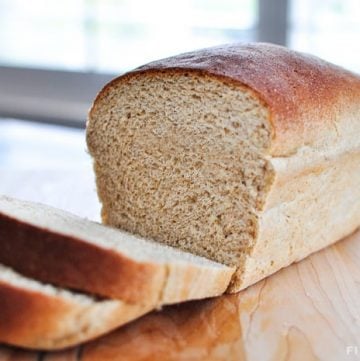