Crisp on the outside and fluffy on the inside, Whole Wheat Apple Cinnamon Waffles are perfectly spiced and bursting with chunks of sweet, tender apples...and they make your whole house smell heavenly as they bake! 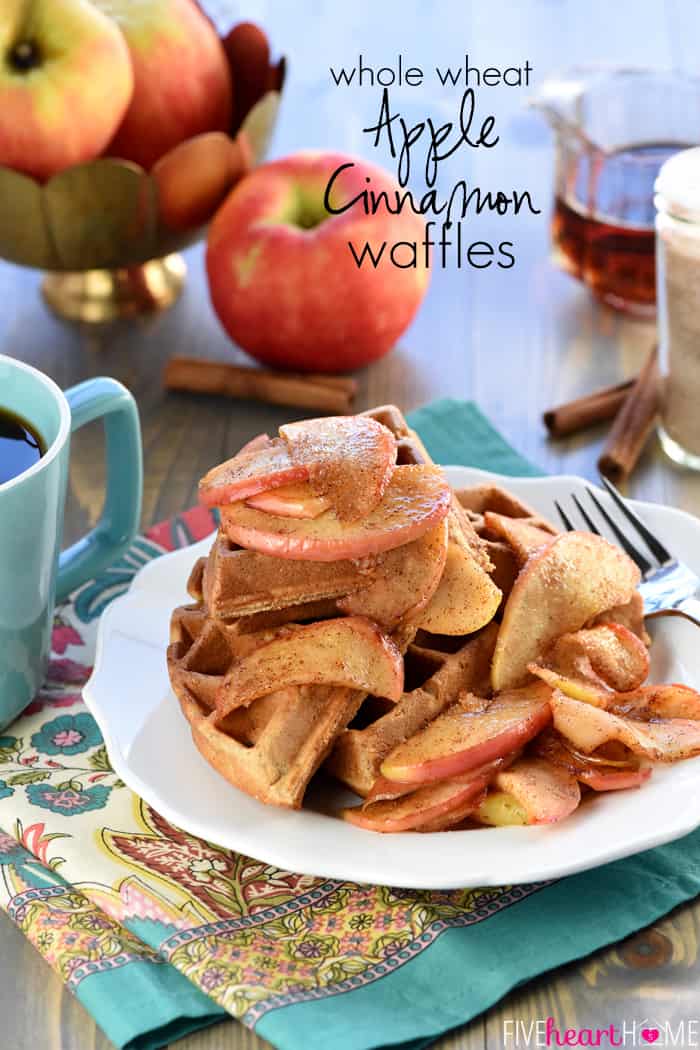 One of the things I've missed over the past few months of writing my cookbook has been making homemade breakfasts for my kids. It sounds silly, but making homemade breakfast has always just been "my thing." We've had slow cooker dinners coming out the ears, of course, but that left me with no time left to stock the fridge and pantry with the usual breakfast staples that I like to feed my kids during the school week -- granola, breakfast cookies, smoothies, baked oatmeal, muffins, and the like. And even though my kids were perfectly happy eating cereal, the first thing I wanted to do today -- when I wasn't otherwise occupied putting three different recipes in three different slow cookers -- was make some waffles! 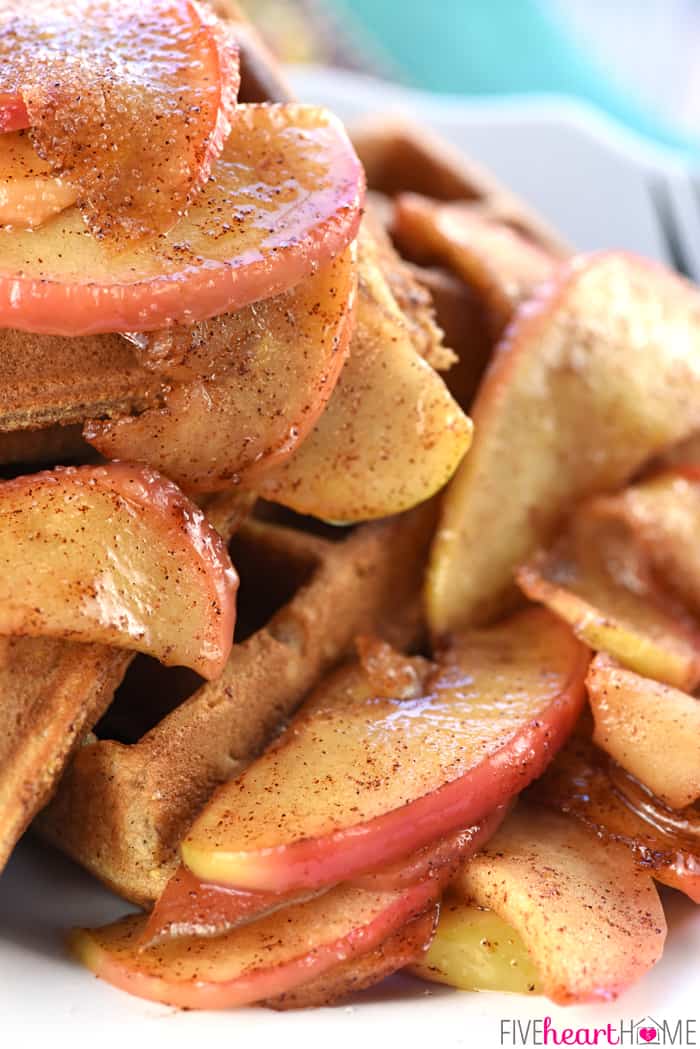 My 3-year-old has actually been eating frozen waffles lately, and I recently picked up an apple cinnamon-flavored variety that quickly became her new favorite...and I have to admit they make the whole house smell amazing when they're in the toaster. So in my newfound freedom this morning, I decided to take my tried-and-true Homemade Whole Wheat Waffle Mix and turn it into easy, from-scratch Whole Wheat Apple Cinnamon Waffles! Let's just say that the aroma emanating from the waffle iron -- and the subsequent fluffy goodness under a pile of warm cinnamon apples and a drizzle of maple syrup -- put those frozen waffles to shame. 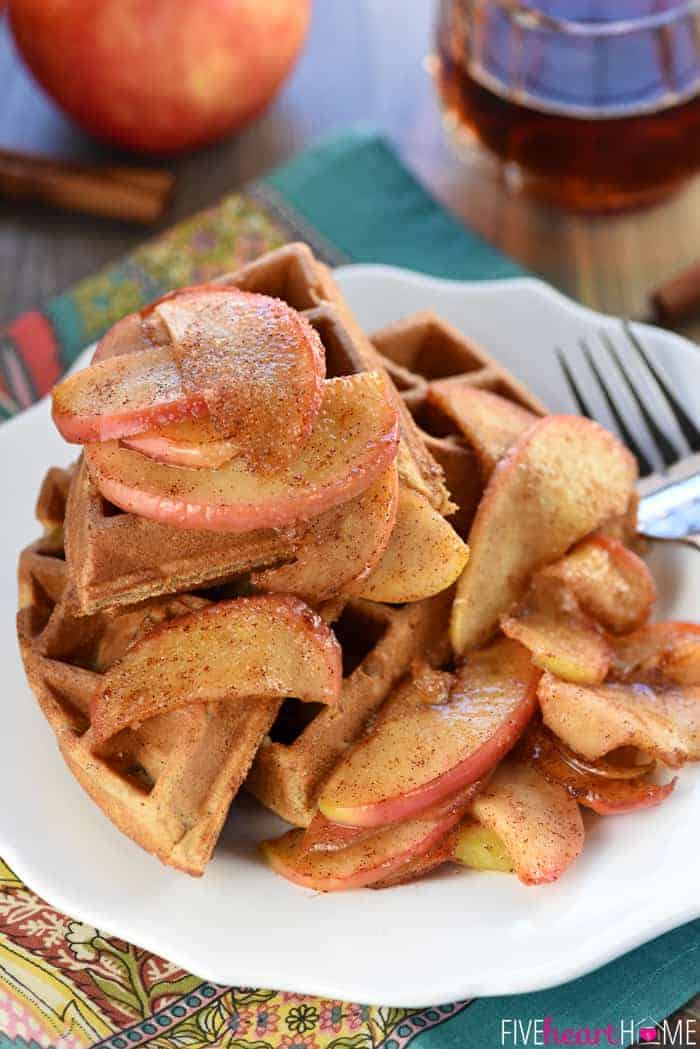 They're crisp on the outside. They're tender and fluffy on the inside. They're lightly kissed with cinnamon and riddled with steamy pockets of soft, sweet apples. And if you really want to make them special, you can even sautée some sliced apples in butter, cinnamon, and sugar for a topping that takes them over the, er, top! 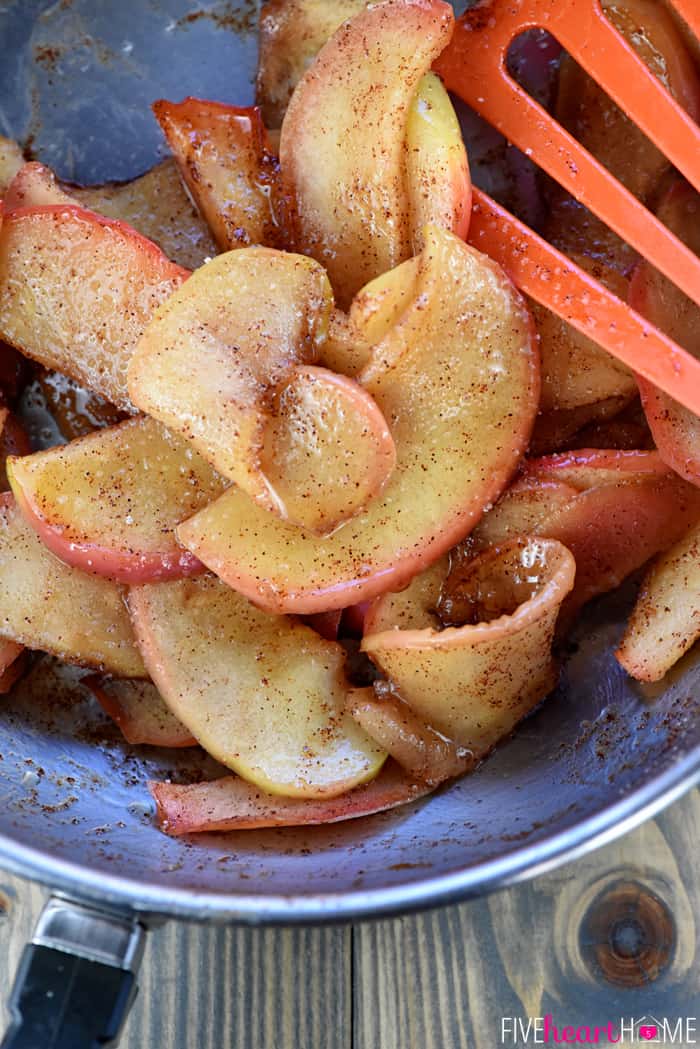 And since this post is already in contention for the wordiest post ever, I may as well go for broke and share one more quick little story with you. See that shiny golden bowl holding the apples in the background of these photos? Well, last week a certain middle child had an exceptionally good day at school, which earned him a special trip to the class Treasure Box. And instead of picking out a toy for himself, he chose this shiny gold plastic bowl to give me as a prop "for my recipe pictures." 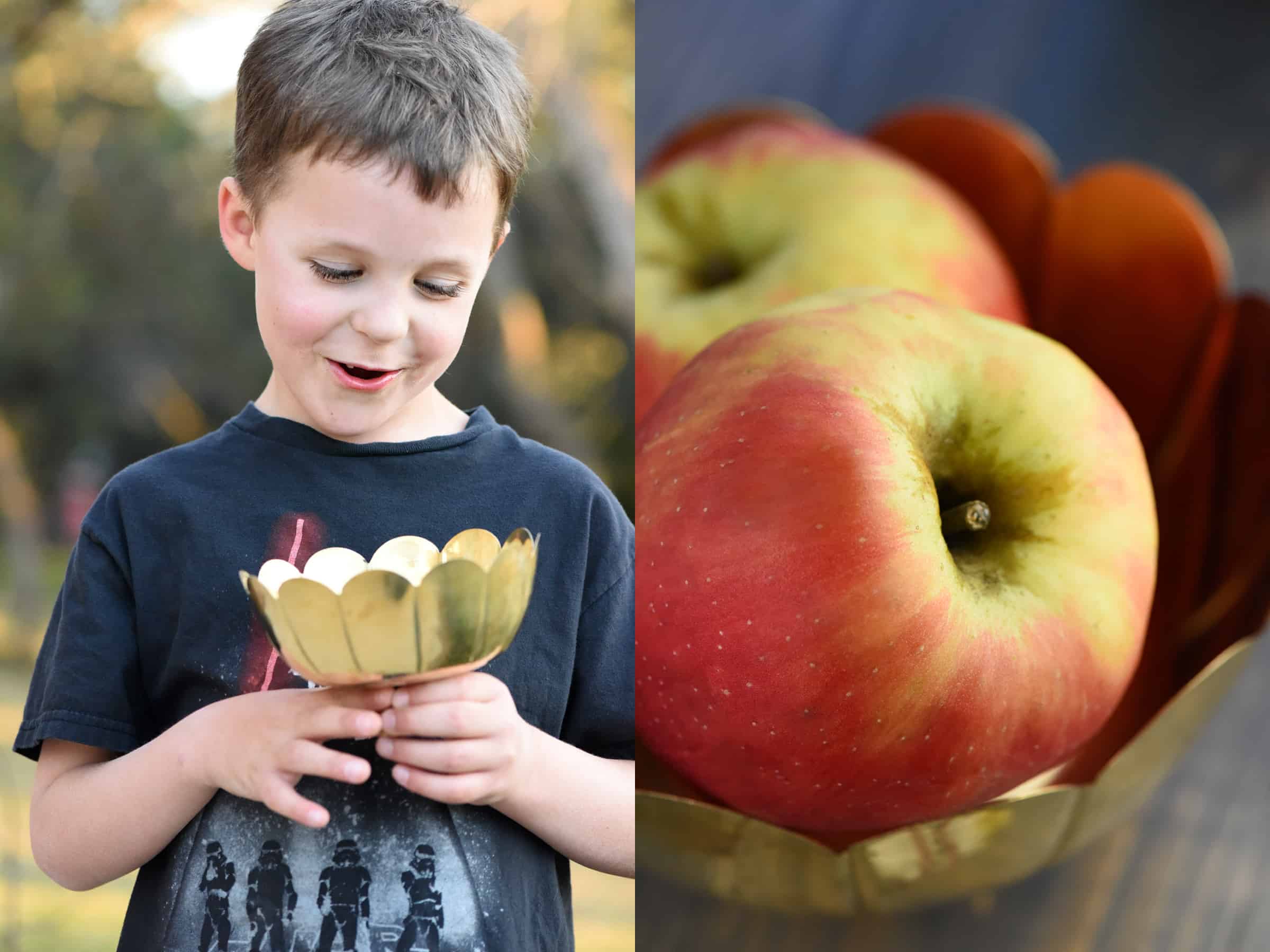 Seriously, how sweet is this boy? My heart just about melted. It's the most beautiful ugly bowl that I've ever seen. And not only am I featuring it in this post, but I'm now determined to figure out a way to sneak it into one of the remaining cookbook photos that I need to take in the next month. So keep your eyes peeled for the notorious golden bowl in print(!!!) come October... 😉

Oh, happy day...it's finally time for the recipe! Thank y'all again for hanging in there with me...through the past few months and the past multiple paragraphs. I so appreciate each and every one of you. And now let's celebrate with Whole Wheat Apple Cinnamon Waffles...hooray! 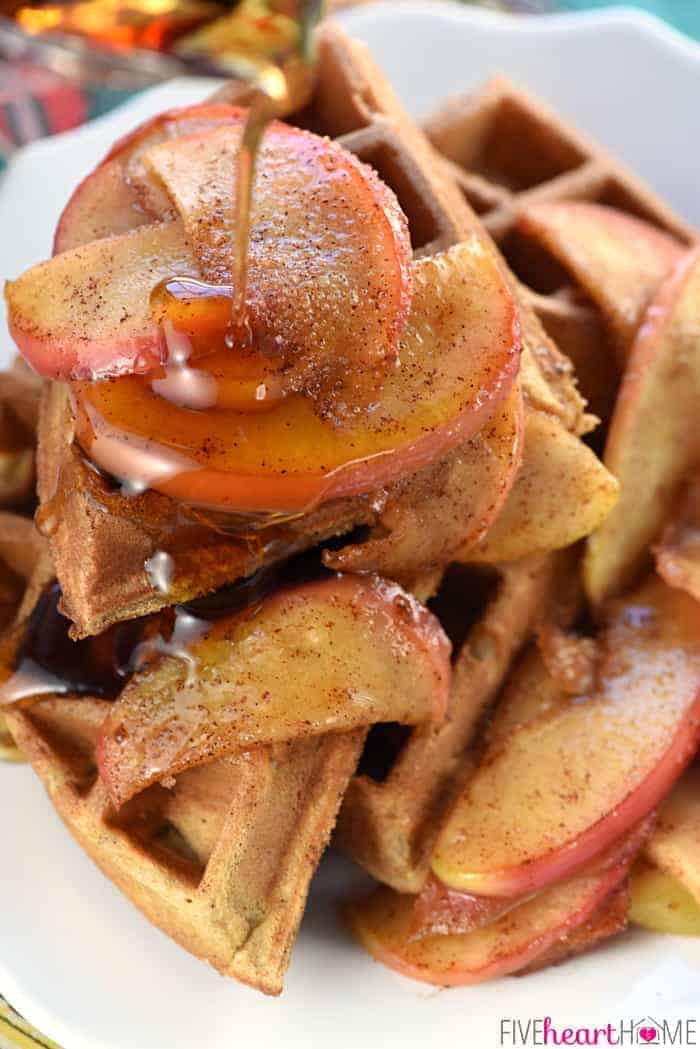 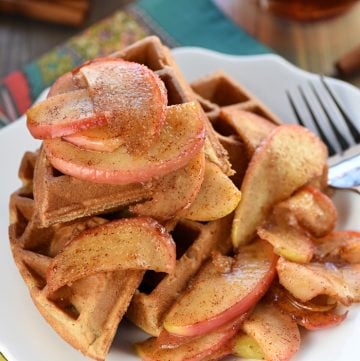 Crisp on the outside and fluffy on the inside, whole wheat Apple Cinnamon Waffles are perfectly spiced and bursting with chunks of sweet, tender apples...and as a bonus, they make your whole house smell heavenly as they bake!
Print Pin Rate
Course: Breakfast
Cuisine: American
Prep Time: 20 minutes
Cook Time: 25 minutes
Total Time: 45 minutes
Servings: 6 large round waffles (slightly more or less, depending on the size/shape of your waffle maker)
Calories: 461kcal
Author: Samantha Skaggs

For the Cinnamon Apples: