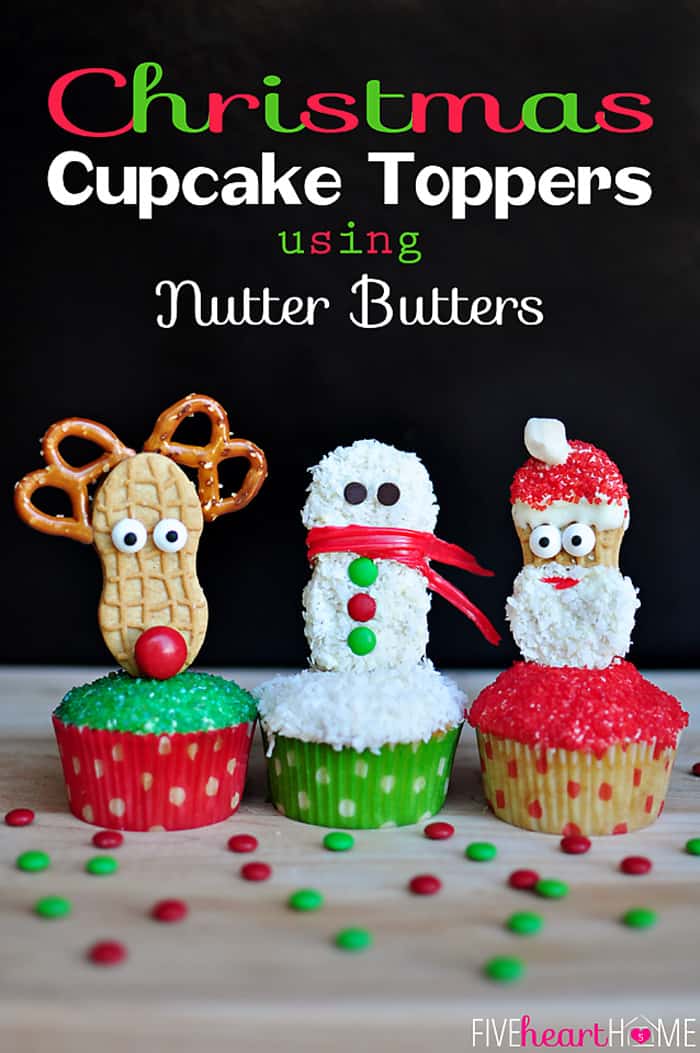 I find it almost impossible to believe that we're less than a week out from Christmas. My kids are wrapping up school this week, and (in between getting all of the presents wrapped) I'm looking forward to some enjoyable, leisurely days over the next couple of weeks getting in some of the holiday fun that we haven't had time for up to this point: driving around to look at Christmas lights, watching some of our favorite Christmas movies, and baking up more yummy holiday treats together. 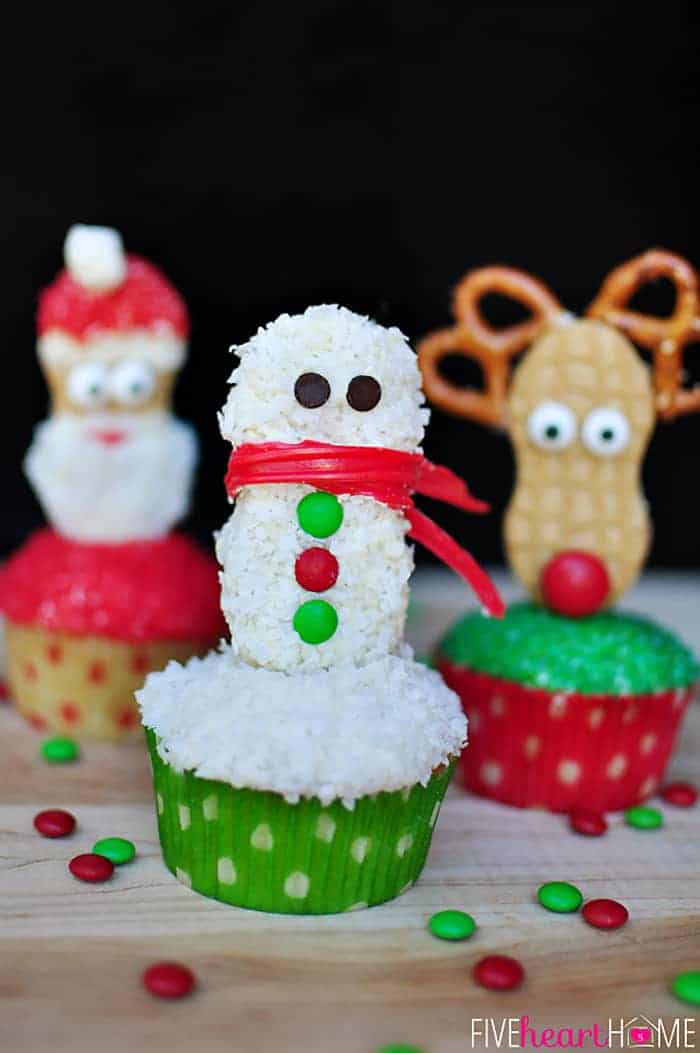 The good news is that whipping up cute Christmas treats doesn't mean you have to break out the fondant or toil over perfectly iced sugar cookies. Baking with kids should be fun, and these Christmas Cupcake Toppers are just that: fun...and easy! My boys were thrilled to help make (and eat!) these cuties and even the 15-month-old was beyond excited about them.

I'm sure you've seen creatively transformed Nutter Butters all over Pinterest, so I'm not sure to whom I should give credit for having inspired these ideas. I know they've been done before in some way, shape, or form...but these are my takes on them. So bake up a batch of your favorite cupcakes (I used this recipe -- the best-ever quick, from-scratch vanilla cupcakes!) and let's get started, shall we?

(No printable recipe today, folks...I think the photos plus some quick descriptions are all that you'll need!) 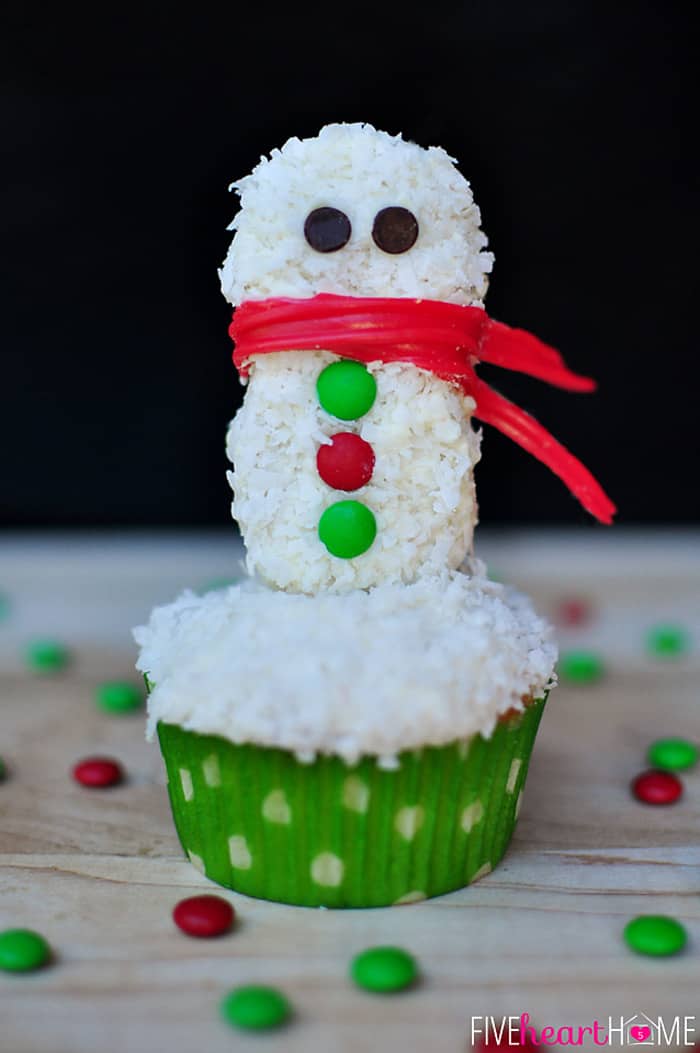 I started out by dipping this guy in some melted white almond bark-type candy coating. Then I pressed him into sweetened, shredded coconut that I'd first given a whir in the food processor. The food processor step probably isn't necessary, but I wanted my coconut to have a finer texture. I used additional almond bark to adhere some mini chocolate chip eyes, mini M&M buttons, and a scarf cut out of a Twizzler. Then I frosted my cupcake, dipped the frosting in coconut, stuck a toothpick in the bottom of my snowman, and centered him on the top of the cupcake. Cute, isn't he??? 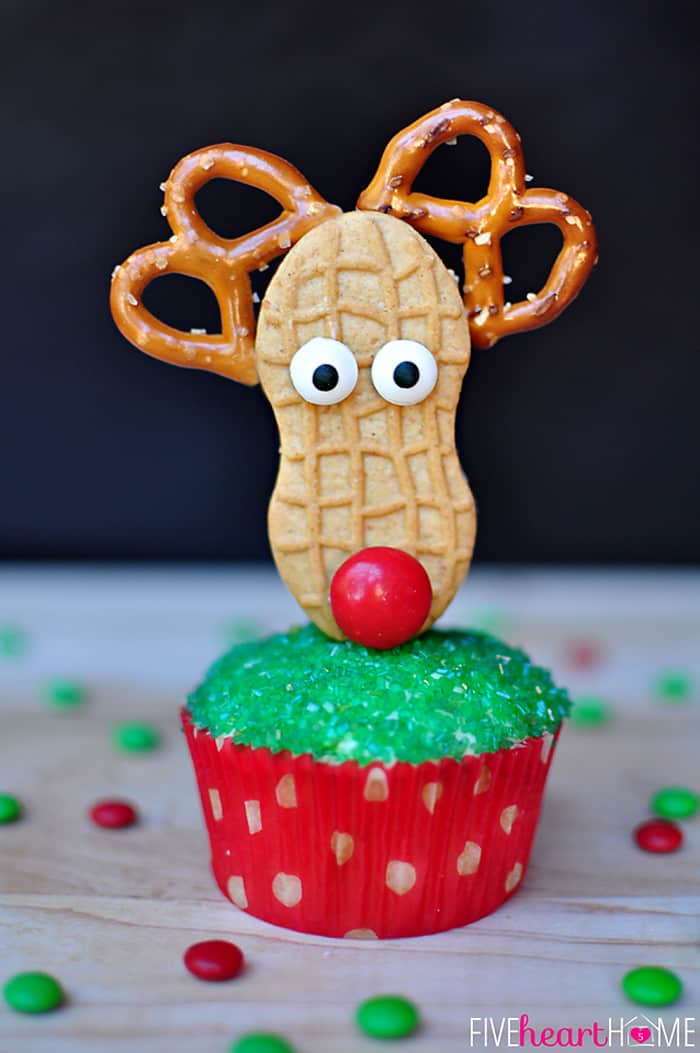 For this guy, I opened up the Nutter Butter and used some melted almond bark to adhere the pretzel twist antlers in place and then to hold the two sides of the cookie back together. I used additional almond bark to affix some candy eyes and a red M&M nose. Feel free to use whatever red candy you happen to have on hand, and halved mini marshmallows with mini chocolate chip centers could also be used as eyes. A toothpick stuck in the bottom, and he was ready to adorn a lucky cupcake! 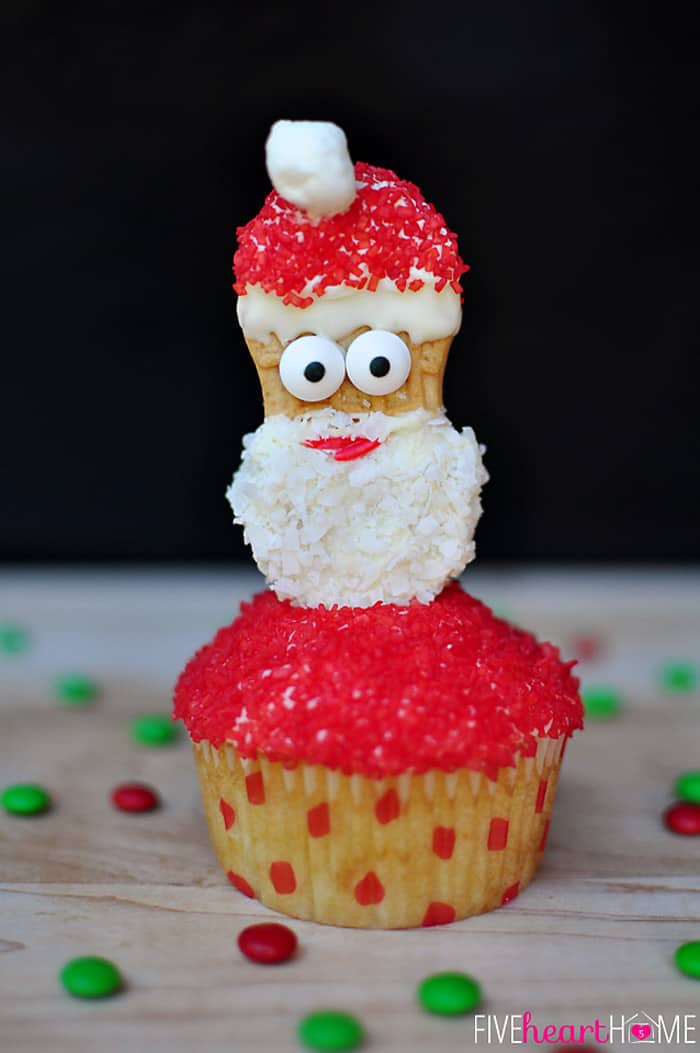 I dipped the top portion of the Nutter Butter in melted almond bark and then in red sparkling sugar, leaving a rim of white for the edge of the hat. I dipped the bottom part of the cookie in almond bark as well, but that part I covered in more coconut to give texture to Jolly Ol' St. Nick's beard. Then I used a bit more almond bark to adhere candy eyes, a teeny, tiny Twizzler mouth, and a mini marshmallow pom pom on the top of his red hat.

And if his eyes look somewhat large in proportion to the rest of his face, that's because he sees you when you're sleeping. 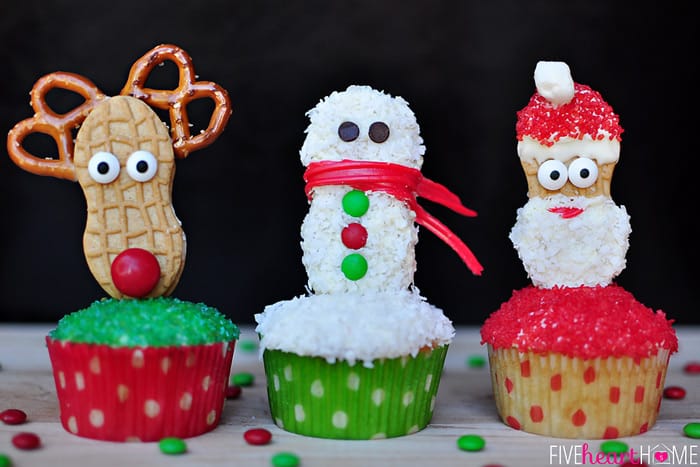 It goes without saying that you can customize these bad boys to your heart's content depending on your own creativity and what type of candy decorations you have on hand. The main thing to remember is have fun! Make one variety or make them all. And if you think of any other Christmas-y characters to make out of a Nutter Butter, please share it with the rest of us in the comments! I've made Nutter Butter flip flops before, but those didn't seem very fitting for December... 😉