Artichoke Bruschetta features toasty baguette slices topped with a creamy artichoke spread and then broiled until bubbly for an easy appetizer that's fancy enough for a party!

If you're a fan of warm, cheesy artichoke dip, think of this Artichoke Bruschetta as a recipe that takes that classic appetizer to the next level. Because while the additional step of smearing artichoke spread onto baguette slices and then broiling is quick and simple, it makes a HUGE impact...presentation-wise and flavor-wise!

The ingredients for this recipe are simple and straightforward.

In addition to a sliced baguette loaf, you'll also need:

How to Make Artichoke Bruschetta

Fun and fancy Artichoke Bruschetta is surprisingly fuss-free to make!

I think these bites would make a perfect menu addition for a baby or bridal shower, a New Year's Eve bash, or any other party requiring finger food.

But truth be told? The artichoke goodness can also be spread in a dish and baked until golden brown and bubbly to be scooped up as an artichoke dip with chips, crackers, or toasted baguette slices. Can you say yum?

Artichoke Bruschetta is a fun and tasty spin on regular bruschetta that's simple to make and always a hit. I hope you find it to be a yummy addition to the menu the next time you throw a soirée! 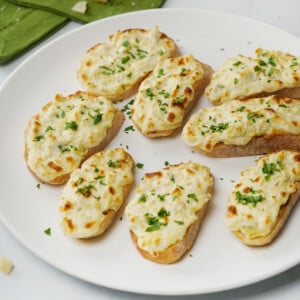 Adapted from Southern Living Ultimate Book of Appetizers.
This recipe was originally shared as a contributor post over at Love Grows Wild, first published here on January 1, 2014, and updated on May 13, 2022.