Tuna Noodle Casserole from Scratch is a quick and easy recipe loaded with tuna, egg noodles, peas, and a creamy, cheesy, homemade white sauce. That's right...this is a recipe for tuna casserole without soup! 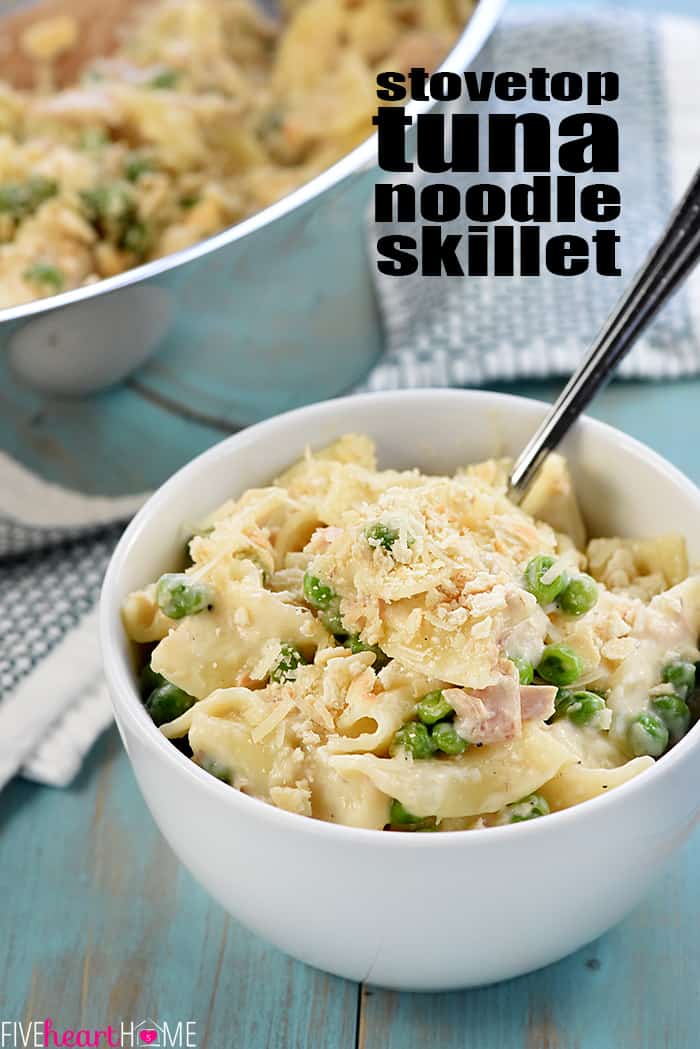 When I need to get dinner on the table in a flash but didn't exactly plan ahead, I often find myself throwing together a one-pot, stovetop recipe based around ground beef. But {gasp}...sometimes there's nary a pound of ground beef to be found in the fridge or freezer! And on those occasions, it's nice to have a recipe in my arsenal that relies on a common, nonperishable, pantry staple instead. Canned tuna just so happens to be perfect for making Tuna Noodle Casserole from scratch!

Who didn't eat tuna casserole as a kid? I remember my mom making it, and I remember enjoying it. But for some reason, I've only sporadically thought to cook it for my own family over the years. So a few weeks ago, when I had one of those it's-5-o'clock-and-I-don't-have-anything-planned-for-dinner moments of panic, I spied two cans of tuna in the pantry...and it was easy Tuna Noodle Casserole to the rescue! 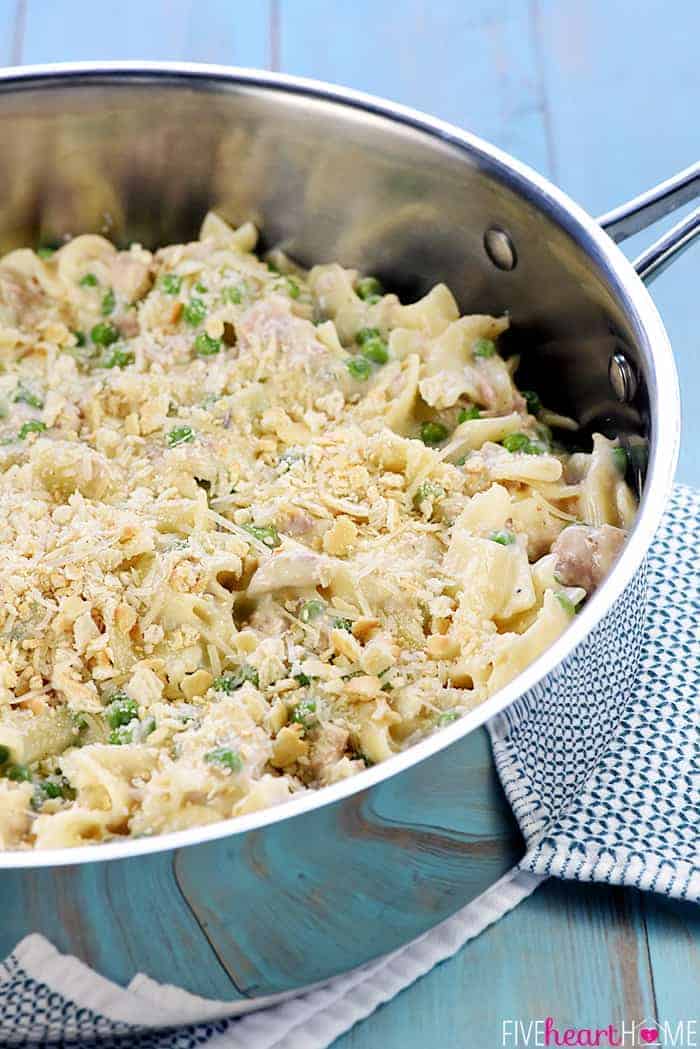 I decided I wanted to keep things as simple as possible and assemble everything on the stove rather than popping a dish in the oven.

I also wanted said simple recipe to be homemade, with nary a can of condensed cream of X to be included...AKA, tuna casserole from scratch and without soup!

How to Make Tuna Noodle Casserole from Scratch

So I put a big pot of water on to boil and got the egg noodles going while I started a basic bechamel sauce in another skillet.

I know, I know...bechamel sounds all fancy and frou-frou and French.

But y'all...it's so, so easy. In fact, it involves nothing more than melting butter, whisking in flour, and ultimately adding milk to make a creamy, dreamy white sauce. 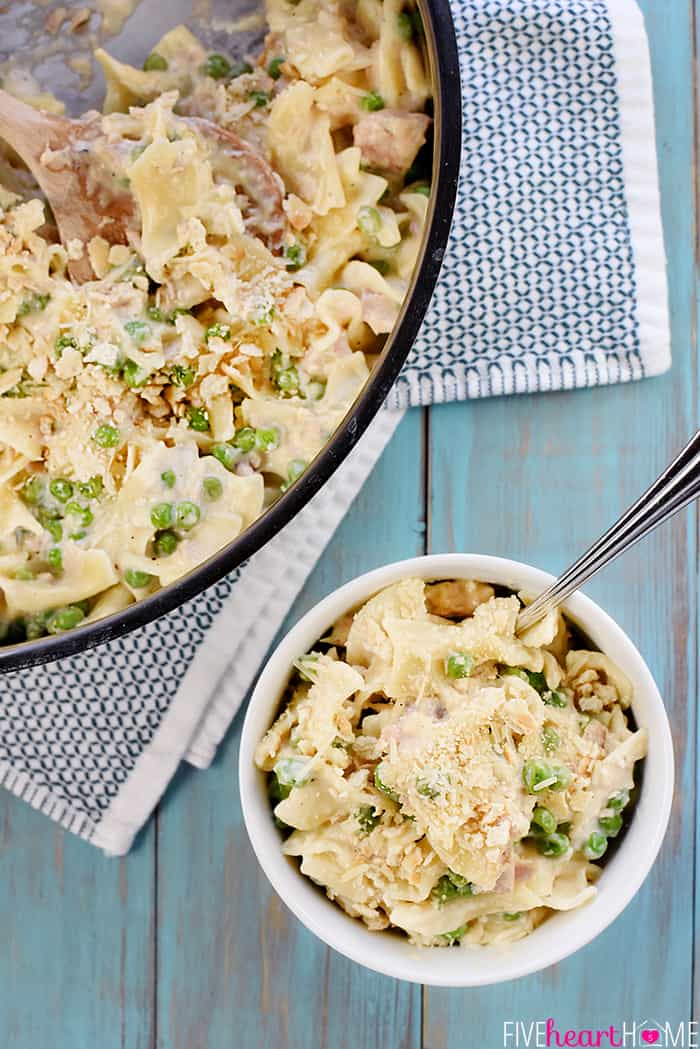 Once the sauce was thick and silky, I seasoned it and stirred in a big handful of grated cheddar cheese plus two cans of drained tuna.

In the meantime, my noodles were almost done, so I dumped some frozen peas into the boiling pasta water to cook for the last minute or two.

Then I drained the noodles and peas, stirred them into the cheesy, tuna-flecked, white sauce... 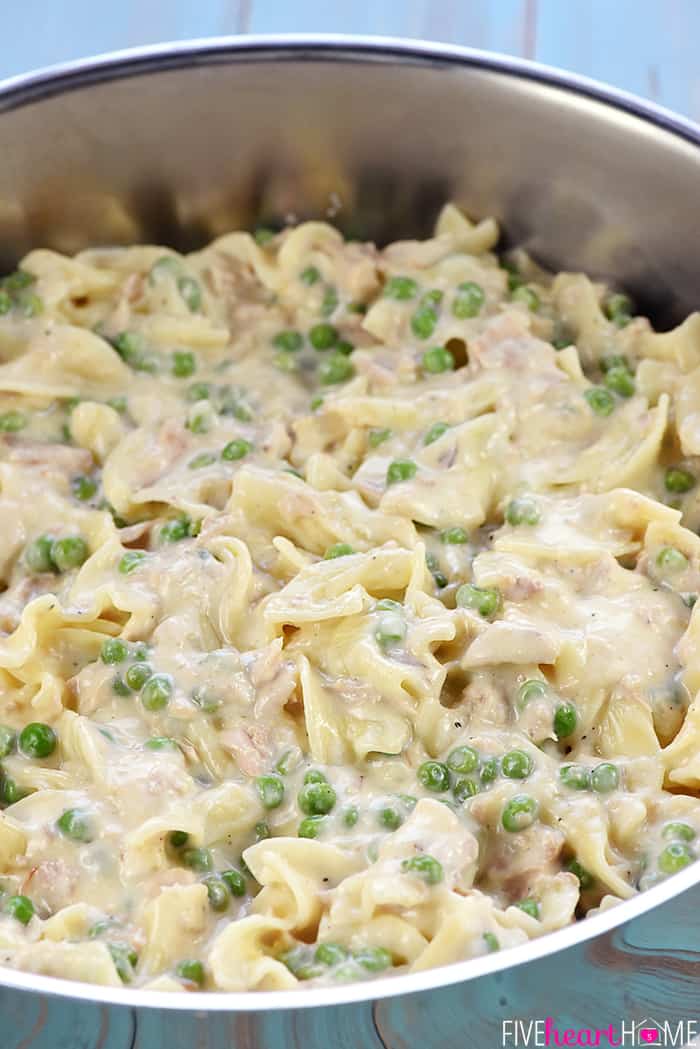 ...and sprinkled the whole skillet with a mixture of crushed butter crackers and grated Parmesan.

In less than 20 minutes, dinner was on the table! 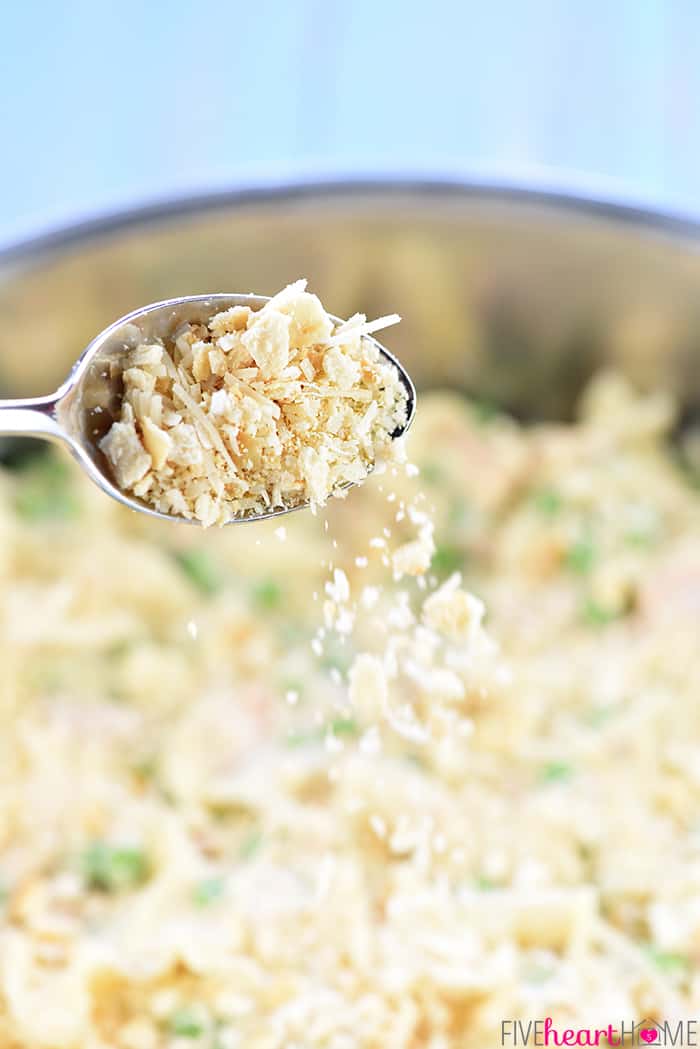 So did my kids love this from-scratch Easy Tuna Noodle Casserole as much as I recall enjoying the recipe from my childhood? Well, both of my boys scarfed it down. And my (pickypickypicky) daughter actually allowed it to occupy space on her plate. Believe me...that's a win around these parts.

But the greatest affirmation came later that evening, when I went to put away the paper where I'd scrawled down the recipe as I made it. I saw that my 9-year-old had written "YUMMY" at the bottom, along with a big smiley face and his signature. Hey, it's not often that something I cook garners legit graffiti on my recipe notes. 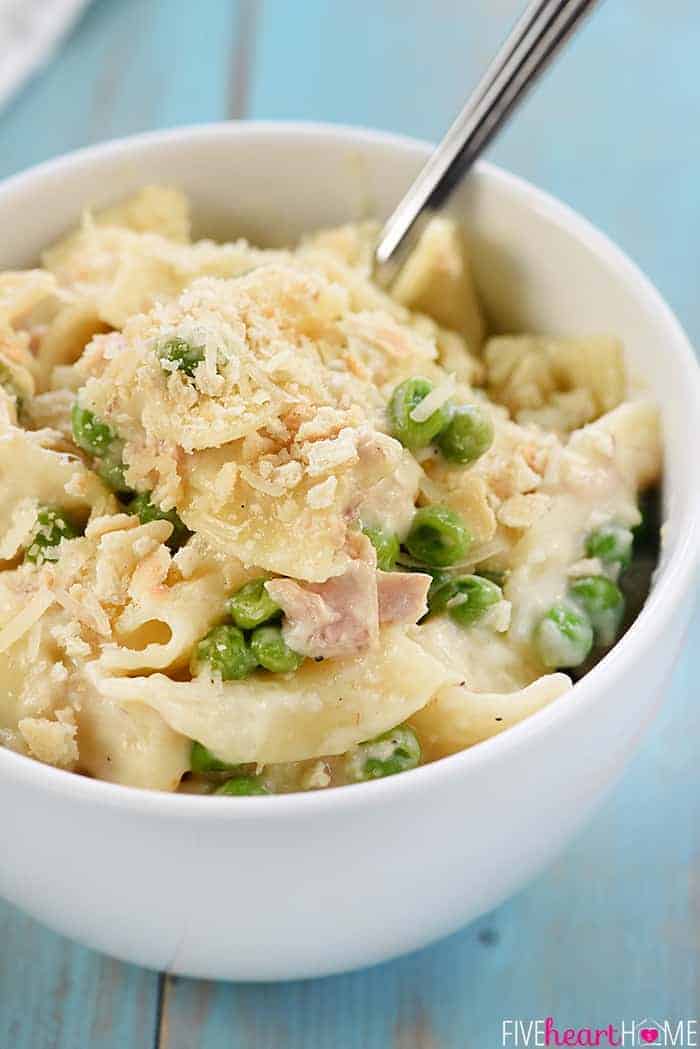 With Lent upon us, my family will be avoiding meat on Fridays and putting Tuna Noodle Casserole from Scratch into regular rotation instead. But I have no doubt that this recipe's popularity at our house will continue long after Easter!

After all, such an easy, tasty, comforting meal deserves to be enjoyed year-round! I mean, I've got recipe graffiti to prove it. 😉 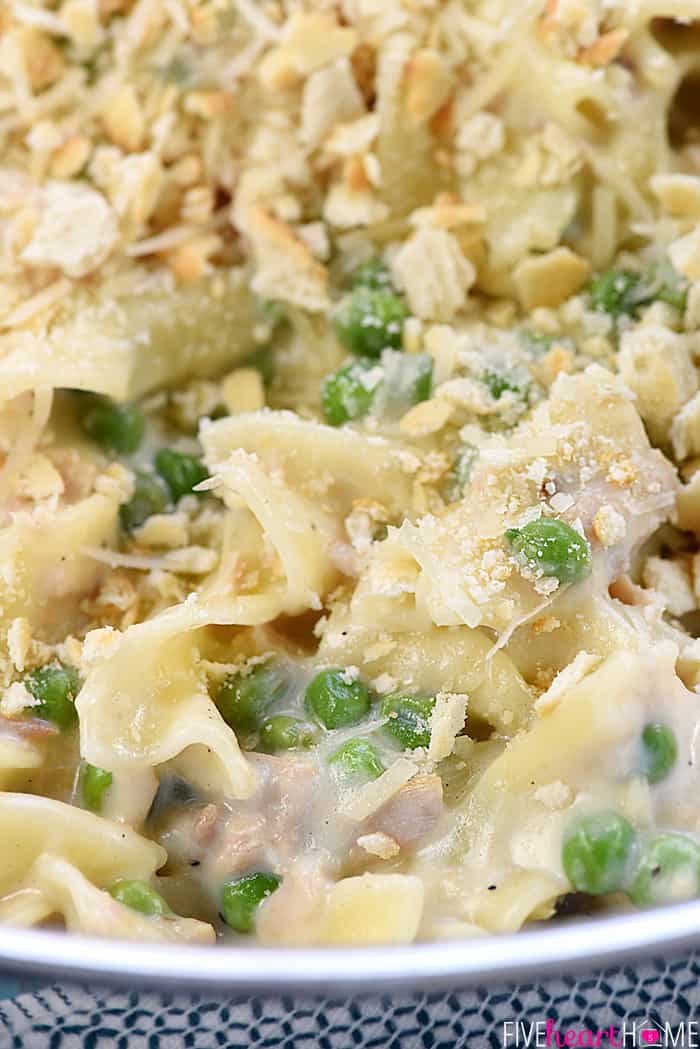 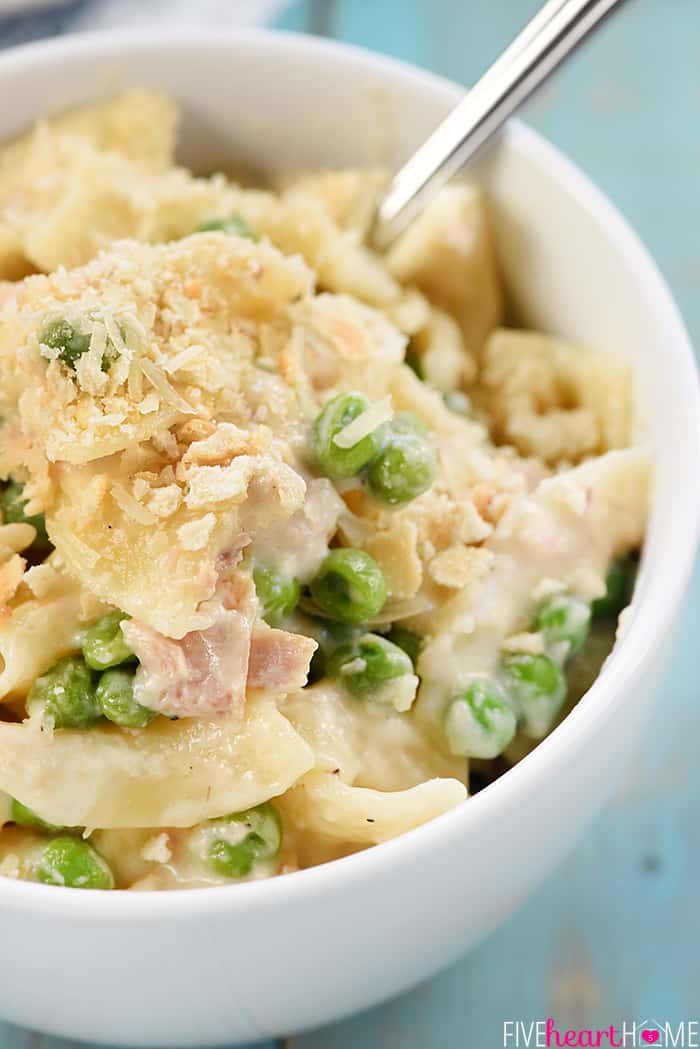 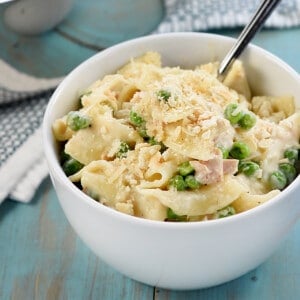