Happy December, friends! The most wonderful time of the year has officially arrived. And between all the parties for hosting, marshmallows for toasting, and caroling out in the snow (or blazing sun…pick your poison), I’m willing to bet you’ll encounter an occasion requiring warm, tasty appetizers. Bonus points if said appetizers are quick and easy to whip up! Well, regardless of the weather forecast, these Blue Cheese, Cranberry, & Pecan Crescent Pinwheels should fit the bill quite nicely! 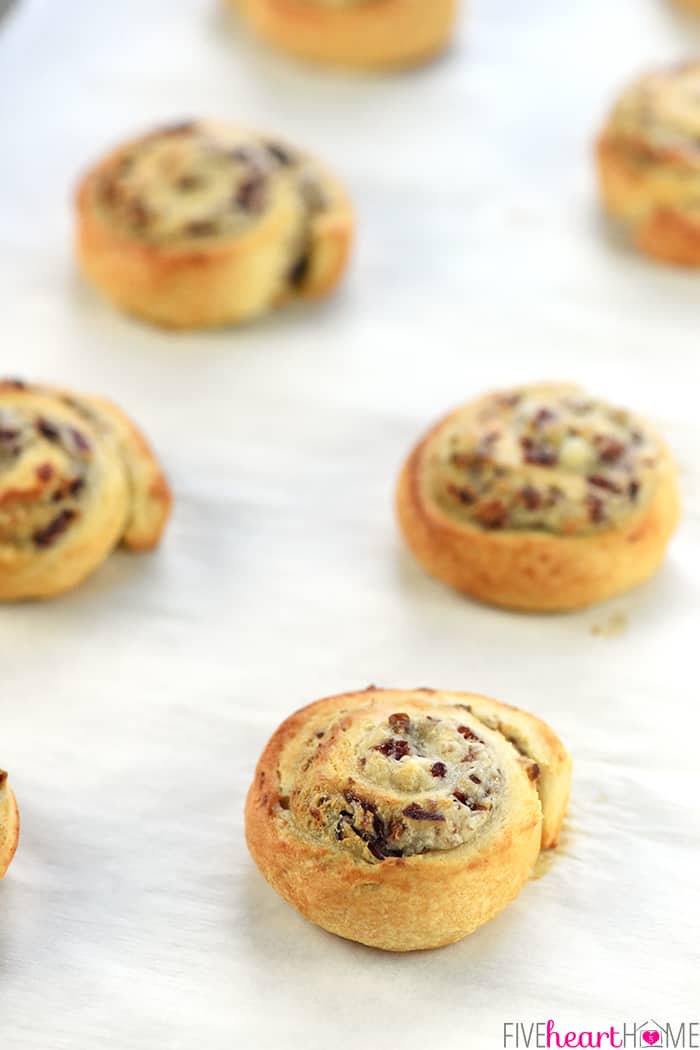 The filling gets all melty and the dough gets all flaky and the final result is delicious, warm, little appetizers that’ll disappear as fast as you can put ’em on a platter!

However, the really fun part is how you decide to fill your crescent roll pinwheels. For today’s recipe, I decided to create a twist on one of the most popular appetizers on the site…Mini Cheese Ball Bites, which feature a base of cream cheese studded with blue cheese crumbles and dried cranberries, rolled in toasted pecans and speared with a pretzel stick. 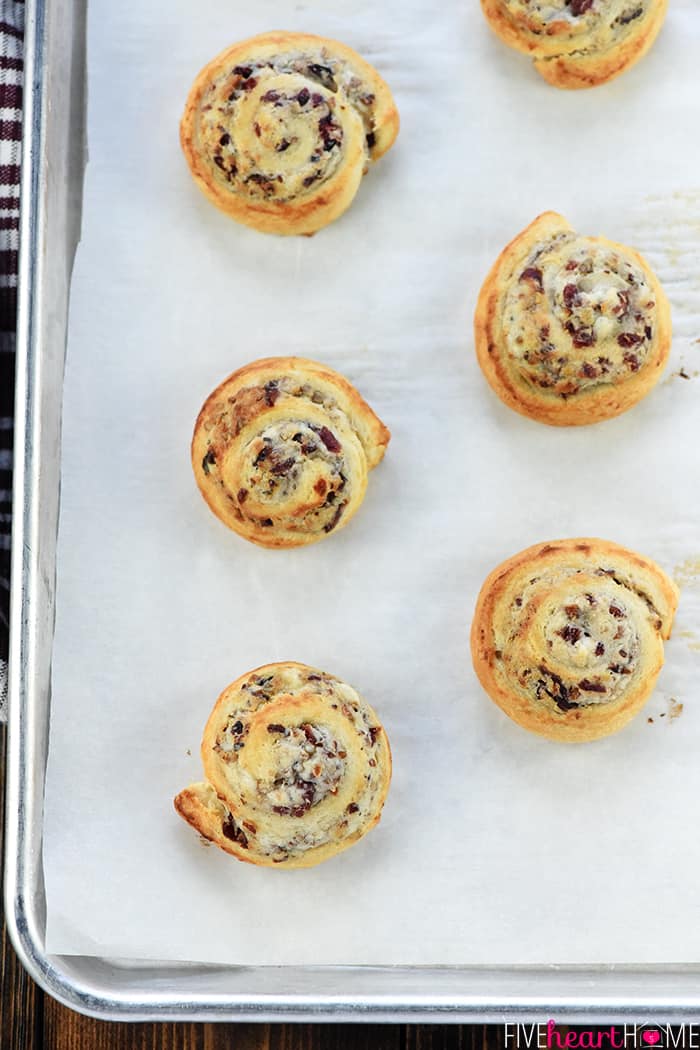 That flavor combo has already proven to be a popular one, so it was no surprise that the same held true for these Blue Cheese, Cranberry, & Pecan Crescent Pinwheels. The zingy blue cheese is nicely balanced by the sweet cranberries, though the cream cheese keeps any one flavor from dominating. Cranberry always reminds me of this time of year, and indeed, these little bites would be perfect for your upcoming holiday celebrations. And while festive enough for Christmas and sophisticated enough for New Year’s, this appetizer would also be perfect for any occasion or gathering throughout the year! 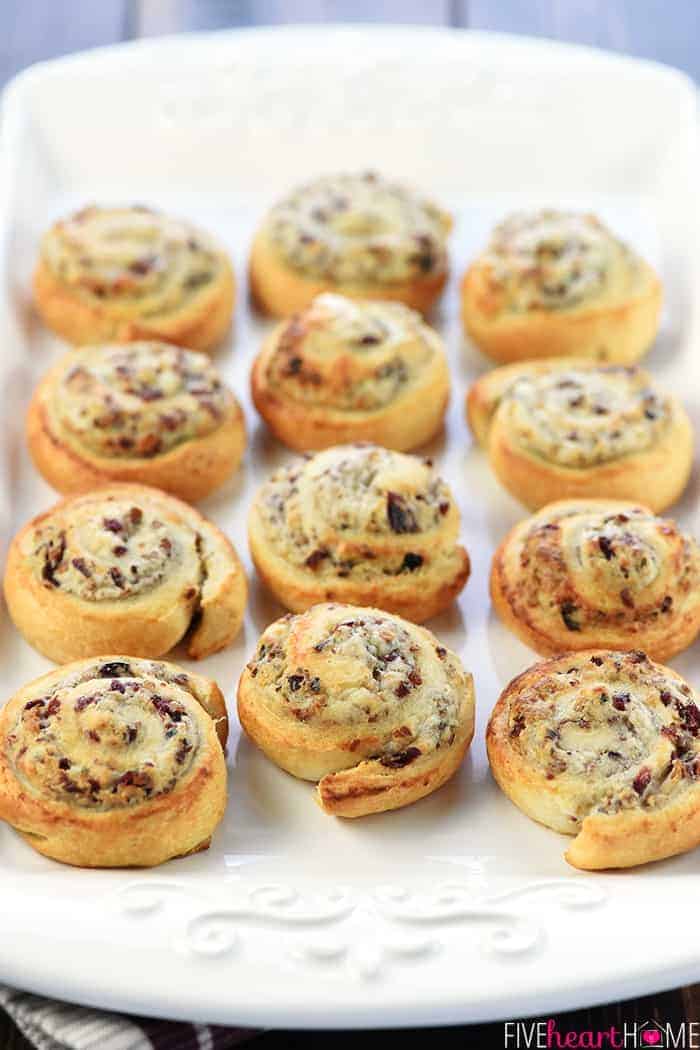 Have I mentioned how simple they are to make? Simply unroll your crescent roll dough and press pairs of triangles together to form four rectangles. Mix up the cream cheese mixture, smooth the top, and draw intersecting lines with a knife to divide it into fourths. Then scoop out one-fourth to spread on the first rectangle, roll, and repeat until you have four rolls. 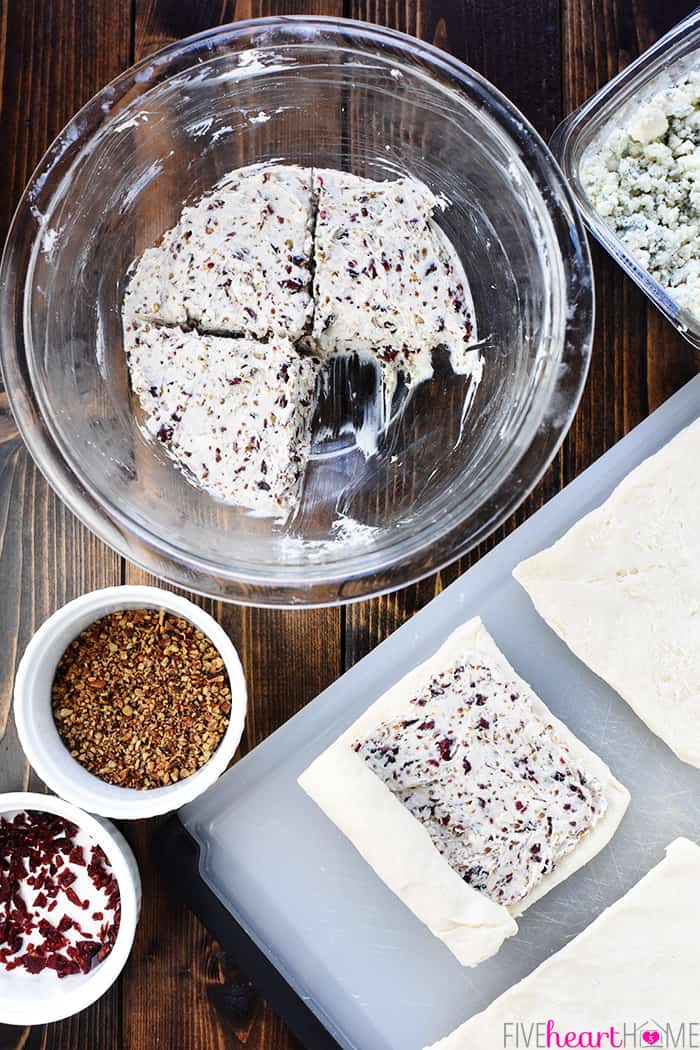 Cut each roll into 6 slices and arrange the pinwheels on parchment paper-lined baking sheets. 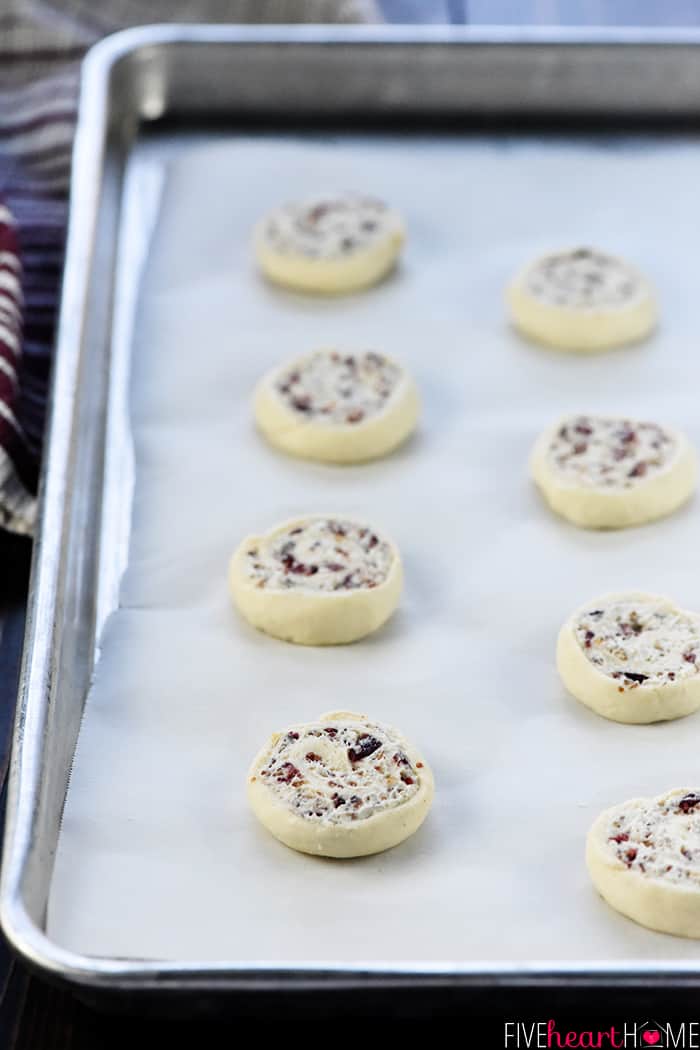 Pop in the oven and, 10 short minutes later, your Blue Cheese, Cranberry, & Pecan Pinwheels will be ready to enjoy! 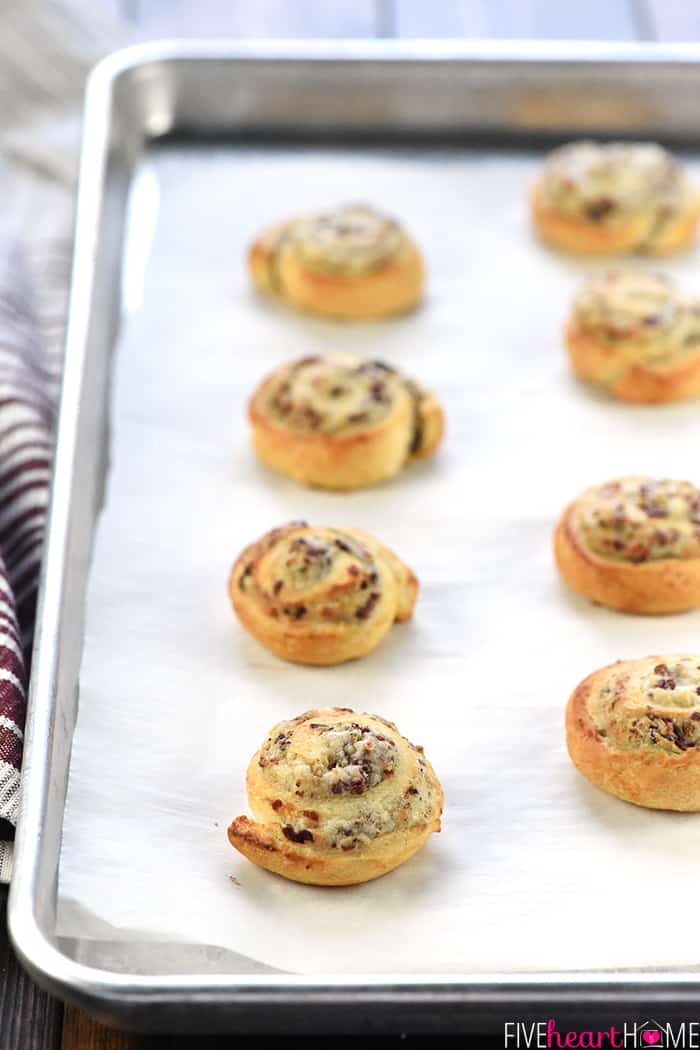 So here’s to December! And here’s to yummy, easy little appetizers that’ll be the hit of any party…particularly during this hap-happiest season of allll.? 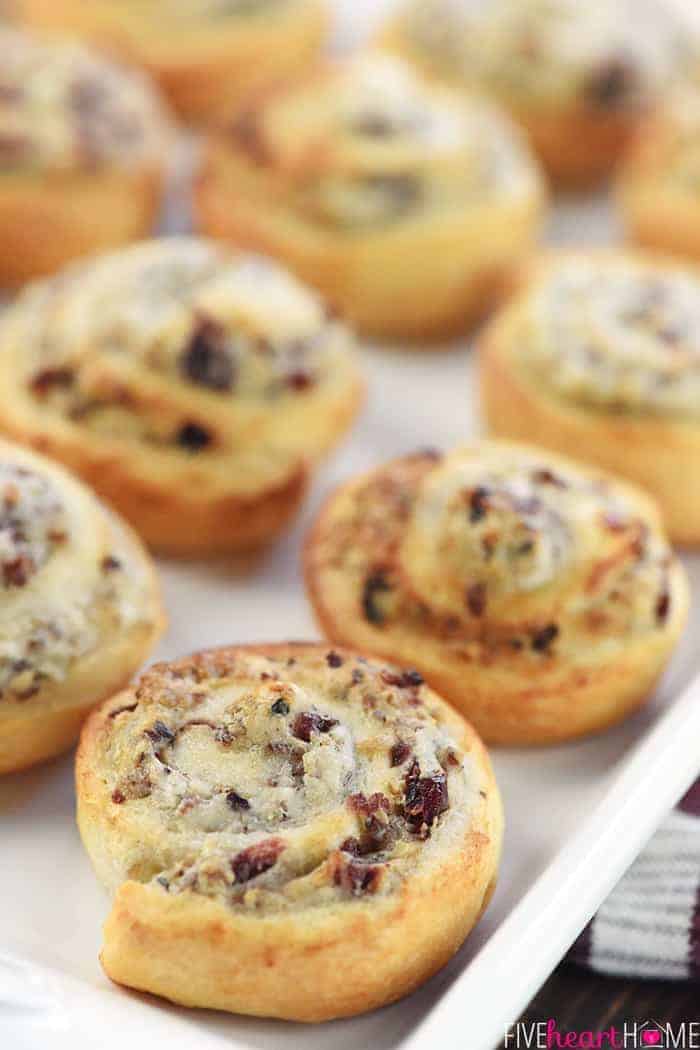 
(some affiliate links below) 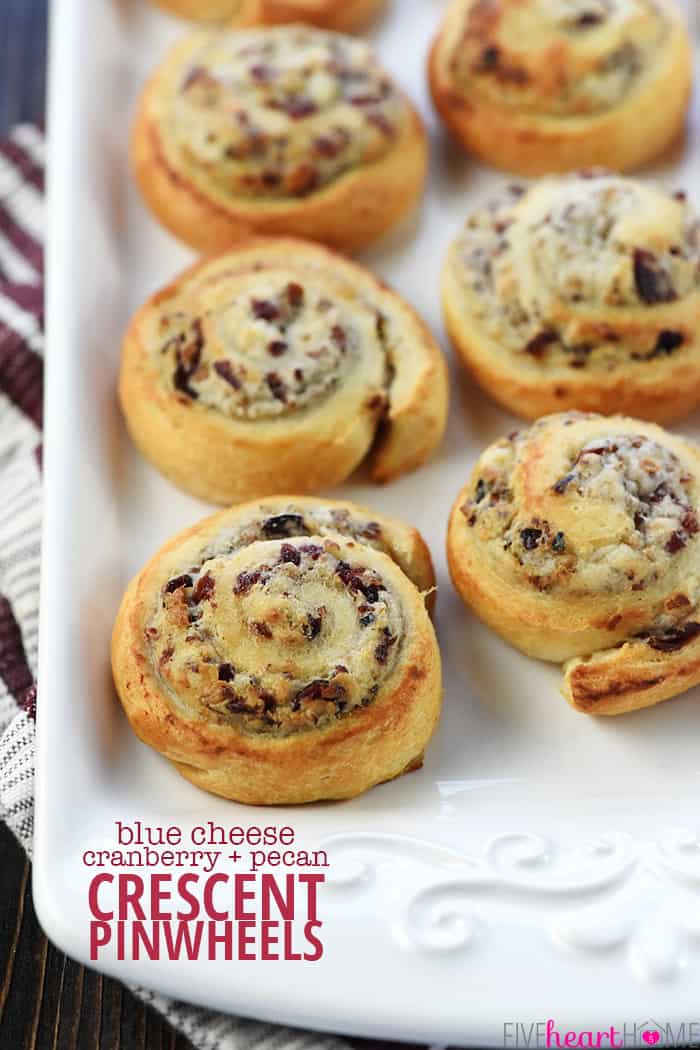 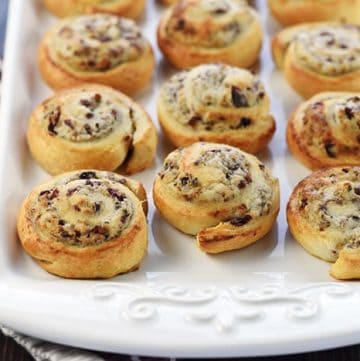