Pumpkin Icebox Cake with Gingersnaps is an easy, no-bake fall dessert of pumpkin, cream cheese, and fresh whipped cream layered with gingersnap cookies that transforms into soft, creamy cake after chilling in the refrigerator! 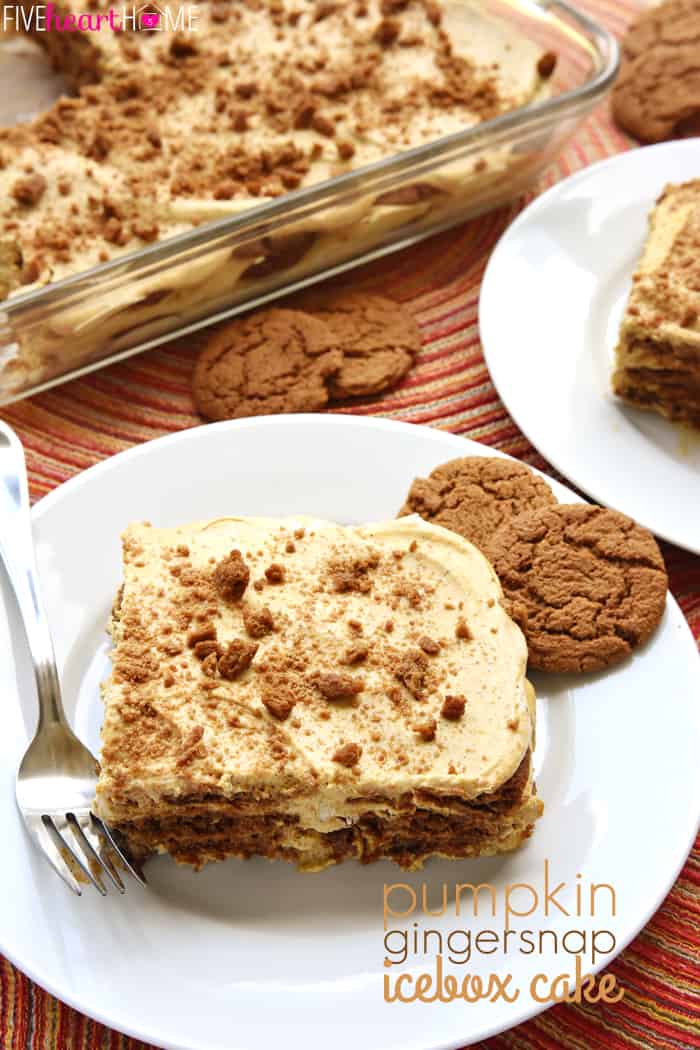 Have you ever enjoyed the wonder that is icebox cake? It's really quite amazing.

What starts out as a whipped cream-based mixture layered with some sort of cookies/graham crackers/wafers turns into a soft, moist, creamy concoction, totally reminiscent of cake.

And today, I've got a Pumpkin Icebox Cake that's going to knock your socks off! 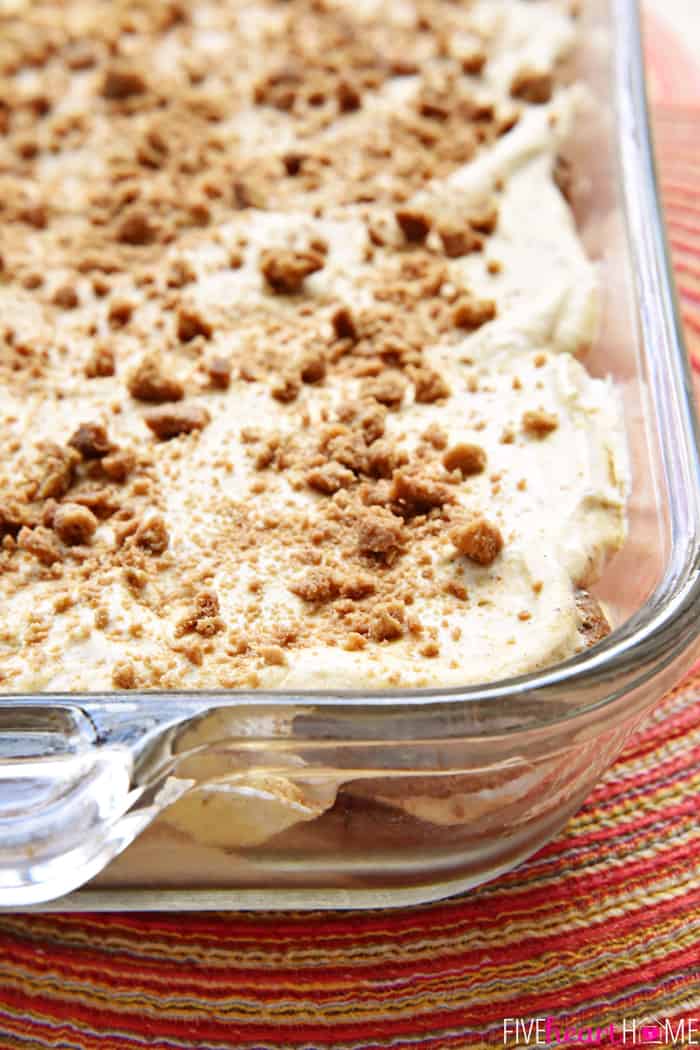 I was inspired to create this icebox cake by the flavors of a pumpkin dip that I've been making for years, courtesy of a little recipe print-out that I picked up one day while purchasing a giant tub of Nyåckers Swedish Gingersnaps at World Market. The pumpkin dip is delicious with a variety of dippers, from gingersnaps to graham crackers to apple slices. It's effortless to whip up and it's always the hit of any autumn gathering. 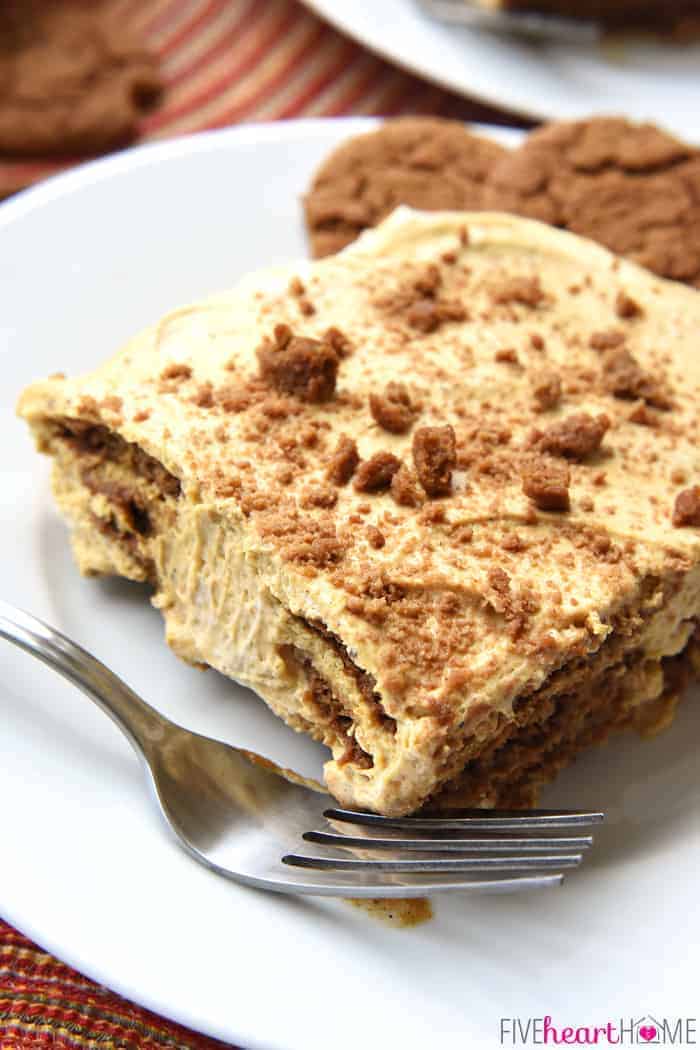 But don't get too excited...I'm actually not sharing that recipe with you today. 😉 There are already a million and one pumpkin dip recipes floating around on the internet, so I decided to instead take my beloved pumpkin dip and layer it into this delightful Pumpkin Icebox Cake with Gingersnaps! Now allow me to back up for a moment as I explain how this recipe evolved to its final incarnation...

Though exceptionally tasty, pumpkin dip (made with pumpkin puree, cream cheese, and spices) is rather heavy to layer into a traditional icebox cake.

So I decided to lighten it up with some freshly whipped cream.

Furthermore, while my initial plan was to use gingersnaps in this recipe, I soon realized that World Market doesn't carry their tubs of Nyåkers until later in the fall, and I felt the need to get y'all some pumpkin goodness STAT. So I deviated from my original gingersnap plan and used cinnamon graham crackers instead. 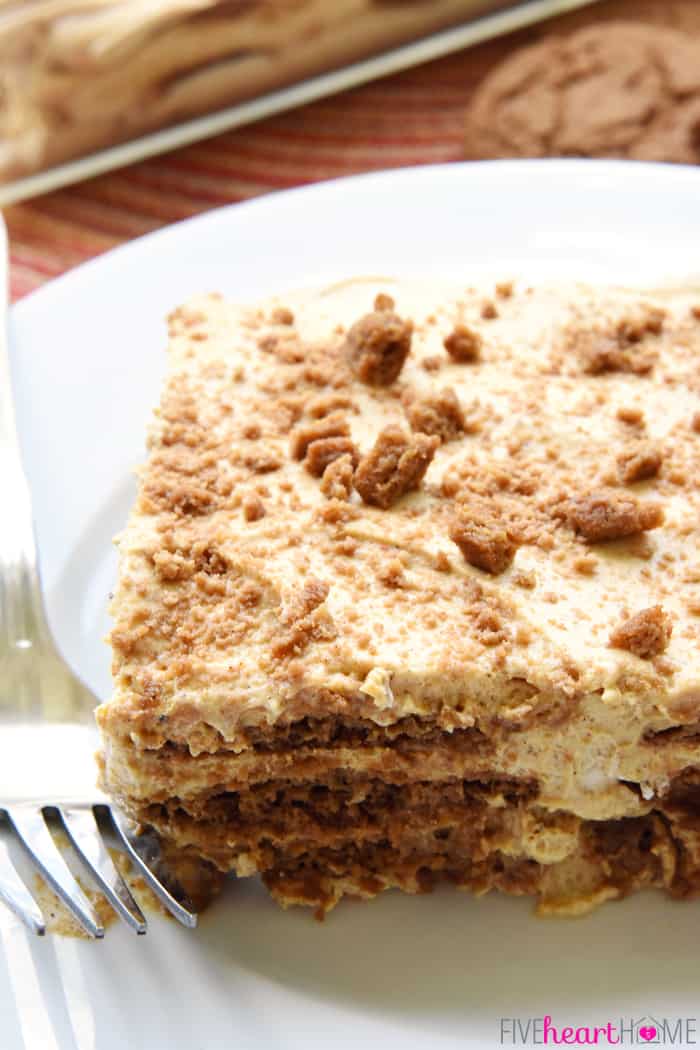 Big mistake! Don't get me wrong...the icebox cake I made with graham crackers was still yummy. However, I thought it was a bit too sweet and lacked the dimension that slightly spicy gingersnaps would have provided. So I headed back to the grocery store to pick up a couple bags of gingersnaps in order to try, try again. I also slightly bumped up the cream cheese in the recipe for that characteristic underlying tang that I love so much.

The verdict? Pumpkin Icebox Cake is a winner! And I'm actually glad that Nyåkers weren't available after all, because I ended up using Stouffer's brand gingersnaps and their thicker, chewier texture really lent itself to softening into icebox cake while chilling. 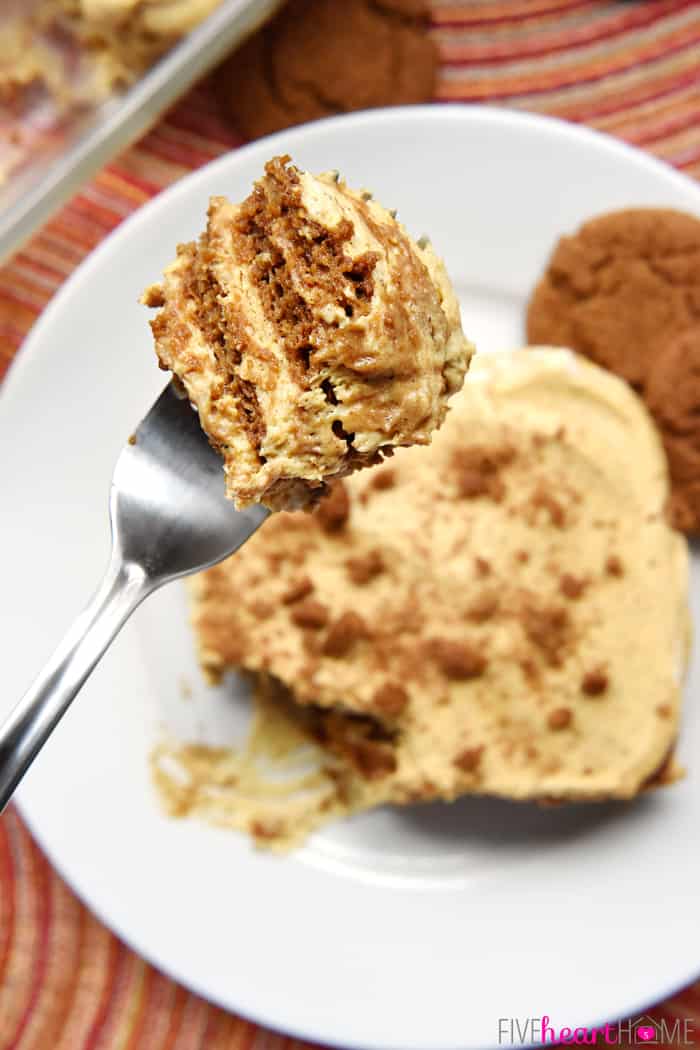 Aside from how yummy it is, I love this icebox cake because it's a way to enjoy pumpkin goodness this fall without ever having to turn on the oven. It's also fabulous for holiday parties and gatherings since it's made ahead of time, freeing you (and your oven!) up for other holiday recipes.

So have you made icebox cake before? Are you a fan of pumpkin? What's the first pumpkin recipe you've already made (or will be making) this season? At any rate, I hope you'll be adding this Pumpkin Icebox Cake to your list! 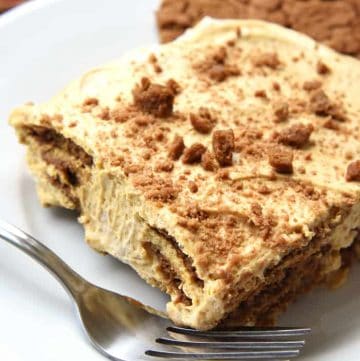 How many gingersnaps you use depends on the size and thickness of your gingersnaps. I used 72 Stauffer's gingersnaps (about 18 ounces worth), which measure 2 inches in diameter. I was able to fit 24 cookies in each layer. If using a very thin gingersnap (like Nyakers), you might consider using a double-layer of cookies for each layer of the icebox cake.
Calories: 182kcal | Carbohydrates: 15g | Protein: 2g | Fat: 13g | Saturated Fat: 8g | Cholesterol: 46mg | Sodium: 56mg | Potassium: 91mg | Fiber: 1g | Sugar: 12g | Vitamin A: 4655IU | Vitamin C: 1mg | Calcium: 40mg | Iron: 1mg
Made this recipe? I'd love to see on IG!Mention @FiveHeartHome or tag #FiveHeartHome!
Pin
Share
« Chewy Snickerdoodle Bars
All-Natural Chocolate Almond Coffee Creamer »