Pumpkin Butter is a healthy, creamy, homemade recipe that's easy to make and delicious slathered on toast and waffles or stirred into oatmeal and smoothies!

It should come as no surprise that the Homemade Pumpkin Puree I previously shared has since been transformed into today's Pumpkin Butter recipe. Not all of it, actually...I froze a baggie of purée for future pie-making merriment, but then I decided to turn the rest of it into this yummy, lightly-spiced, all-natural spread!

Right about now, you may be wondering what the difference is between Pumpkin Purée and Pumpkin Butter? Well, I'm so glad you asked. 😉

Pumpkin Purée is 100% pure pumpkin...just cooked and mashed/whipped/blended into a smooth purée with no additional ingredients.

Pumpkin Butter, on the other hand, is pumpkin purée that has been combined with a variety of other goodies -- such as maple syrup for unrefined sweetness and cinnamon and spices for flavor -- and then simmered and reduced until thick and creamy.

A handful of real ingredients and spices are all you need to whip up this from-scratch Pumpkin Butter recipe!

How to Make Pumpkin Butter

This recipe is truly as simple as combining ingredients and simmering on the stove!

FDA guidelines deem it unsafe to can Pumpkin Butter since pumpkin is not acidic enough.

That being said, it will keep in the refrigerator in an airtight container for 2 to 3 weeks. Old glass jars work great for refrigerator storage.

And it's okay to freeze it (tightly sealed) for 6 months to a year.

If you'd like to make this Pumpkin Butter recipe in the crockpot, that can be done, too! Just be aware that this is not a set-it-and-forget-it type of recipe...you'll need to stay nearby in order to stir it multiple times while cooking.

Because of its silky texture and already sweetened status, Pumpkin Butter can be enjoyed in so many tasty applications. Allow me to enumerate a few...

Inspired, I hope? Get as creative as you like, though...the possibilities are endless!

So are you pumpkined-out yet? I try not to get ahead of myself with the seasons. But since I have this self-imposed rule that pumpkin should be appropriately enjoyed from September 1st through the end of November, I say that Pumpkin Butter is fair game for another month yet!

And if you happen to agree, I hope you have a chance to add this tasty fall recipe to your repertoire soon. 🙂

Recipes to Enjoy with Pumpkin Butter 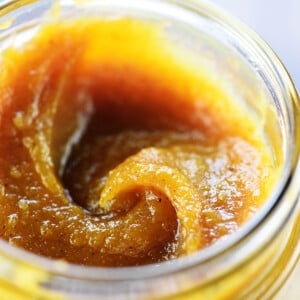