Pumpkin, pumpkin, pumpkin…it’s that time of year, y’all. And I’m trying not to go overboard with the pumpkin recipes that I share here, but I must admit that my mind is constantly pondering which of my favorite, tried-and-true recipes I can pumpkin-ify.

My kids are obsessed with Healthy Oat Smoothies, and I’m not about to argue with any breakfast or snack consisting of frozen fruit, oats, milk, yogurt, and honey. So this past summer, while whipping up their Blueberry Muffin Smoothies and Peach Cobbler Smoothies for the umpteenth time, it occurred to me that pumpkin would make for a great oatmeal-based smoothie. So I waited until September — when pumpkin finally feels “official” to me — and I set out to create a frosty, creamy smoothie with flavors reminiscent of pumpkin pie. 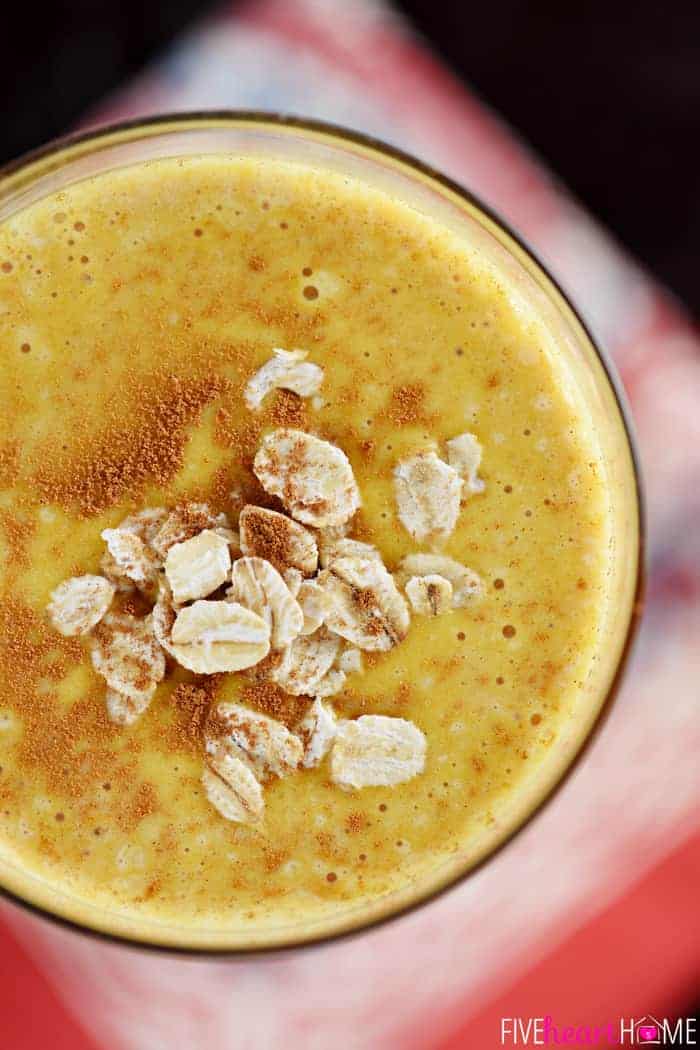 Ding! Ding! Ding! I did it, folks. I always start my smoothies with frozen fruit, and I wasn’t sure how that was going to play out with this pumpkin version. But here’s what I came up with and it worked beautifully…

After cracking open a can of pumpkin, I took a tablespoon and dolloped the pumpkin in little mounds onto a wax paper-lined sheet pan. This gave me 22 tablespoon-sized blobs, which I then popped in the freezer and froze until solid. The resulting frozen mounds of pumpkin ended up being perfect for blending into smoothies for that oh-so-desirable thick, frosty texture. 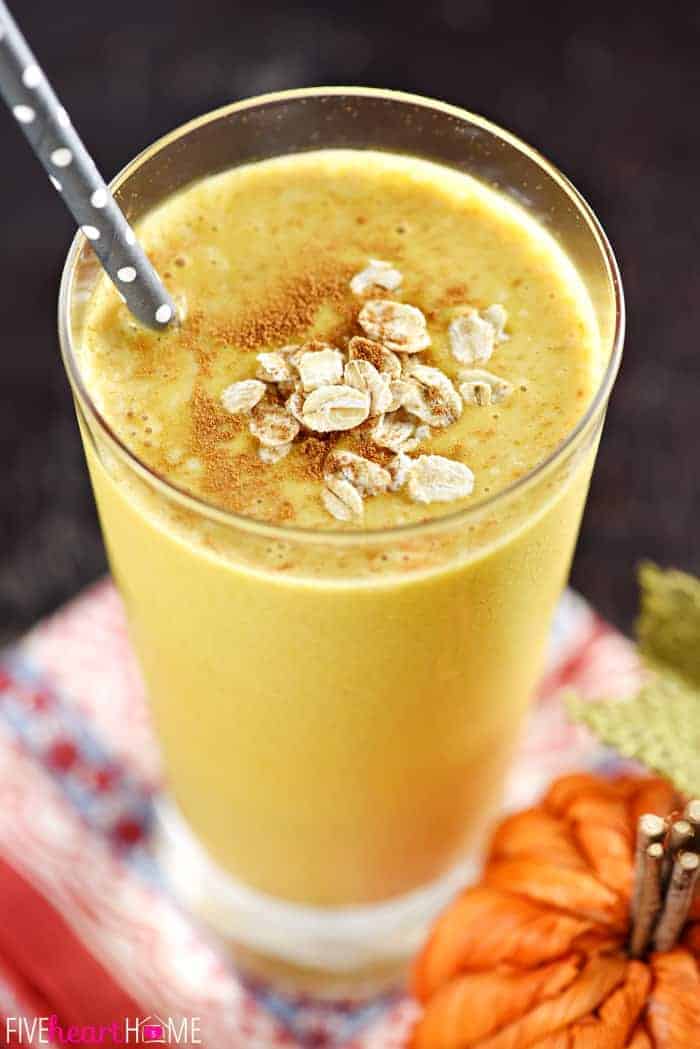 I started out using the same proportions of ingredients as the other oat smoothies in my repertoire, but I soon determined that Pumpkin Pie Smoothies were going to necessitate a few changes. First off, the disks of frozen pumpkin thickened my smoothie mixture a bit more than expected, so I added some additional milk to correct the consistency. But just as importantly, pumpkin can be a pretty overwhelming flavor that requires quite a bit more flavoring than usual. So it took a good amount of vanilla and cinnamon plus an extra squeeze of honey before the smoothie tasted more like pumpkin pie and less like plain canned pumpkin. But here’s the thing…use high-quality vanilla (I’ve said it before and I’ll say it again — Nielsen-Massey is my favorite brand *affiliate link). Because in an uncooked smoothie, you’re going to taste it, and pure vanilla flavor trumps an alcohol-ish aftertaste every time. 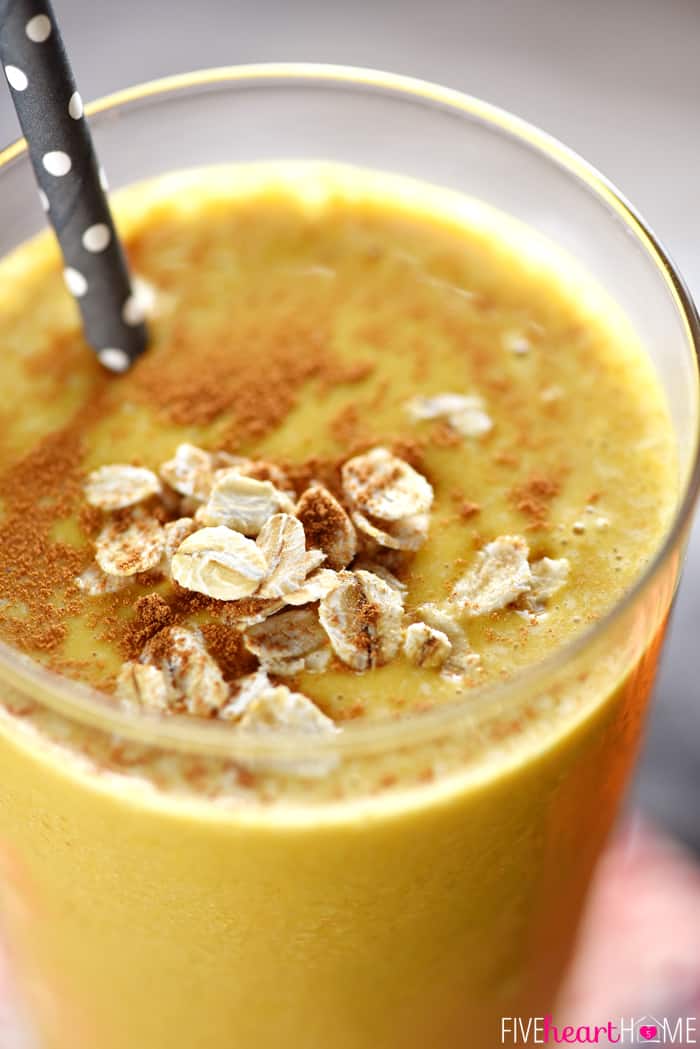 Yep, Pumpkin Pie Smoothies are fit for…a pumpkin lover! Or a smoothie lover. Or someone who appreciates the stereotypical flavors of fall. Or anyone who cares to enjoy the glories of Thanksgiving dessert for breakfast. Bottom line? Make ’em soon, make ’em often, and get all of that pumpkin-craving out of your system before the peppermint recipes hit. 😉 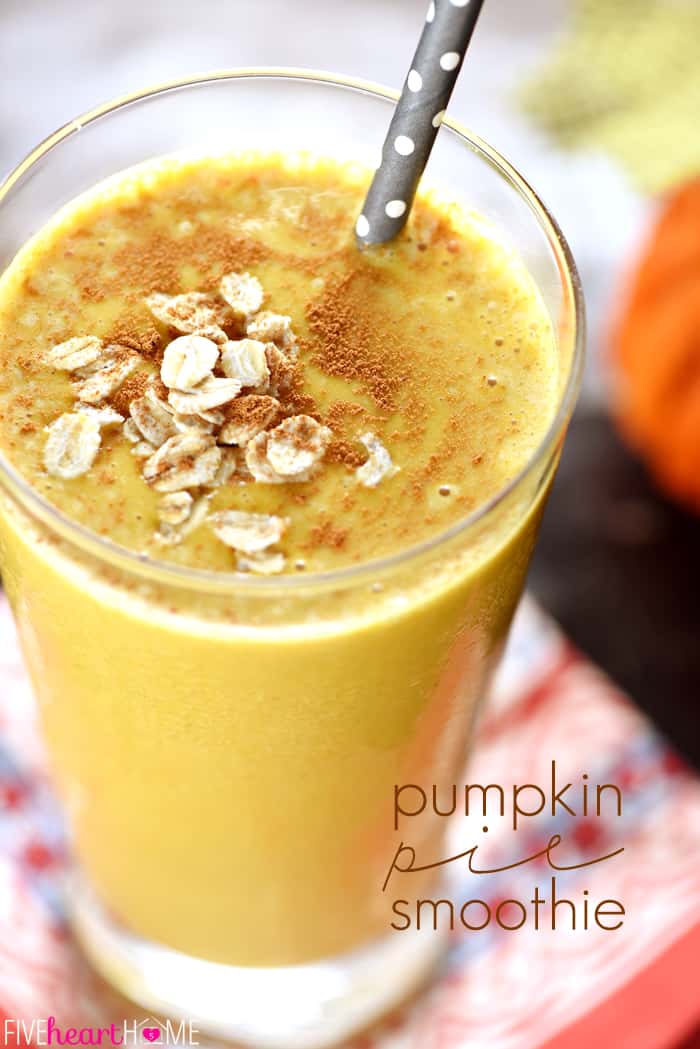 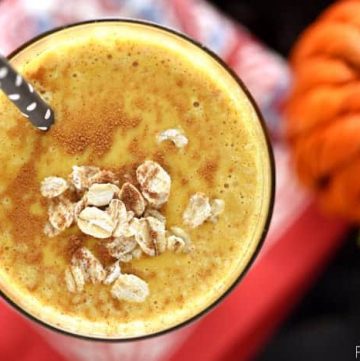