Today's Slow Cooker Eggnog Bread Pudding is special for a couple of reasons.

It's my first eggnog recipe of the year...and if you've been hanging around Five Heart Home for awhile, you know how I like me a good eggnog recipe come December. 😉

But even more importantly, it's totally versatile! You can enjoy it as a special breakfast or brunch, since it's akin to a baked French toast casserole. Or you can serve it as a warm, delectable dessert!

Let's explore both options, shall we? 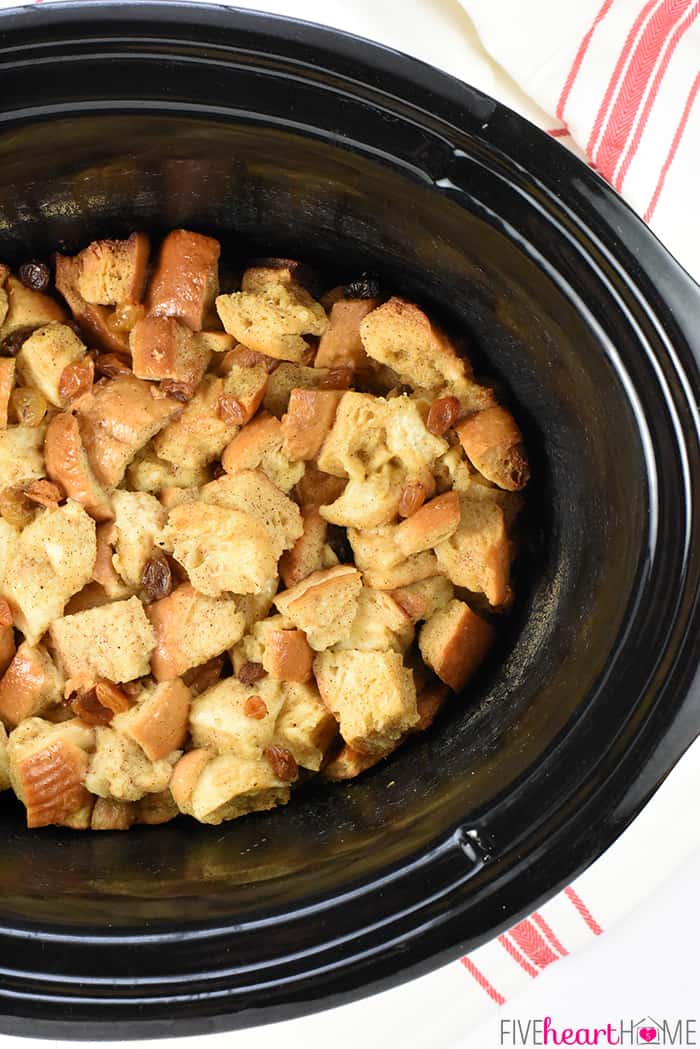 This recipe was actually inspired by my Overnight Eggnog French Toast Casserole from a few years back. Both recipes start with a loaf of cubed French bread that's soaked in an eggnog custard and flavored with vanilla, cinnamon, and nutmeg. But while the original recipe hangs out in the fridge overnight to get baked off in the morning, this version gets transferred to the slow cooker as soon as the ingredients are combined, where it spends a couple of hours cooking into soft, gooey perfection. 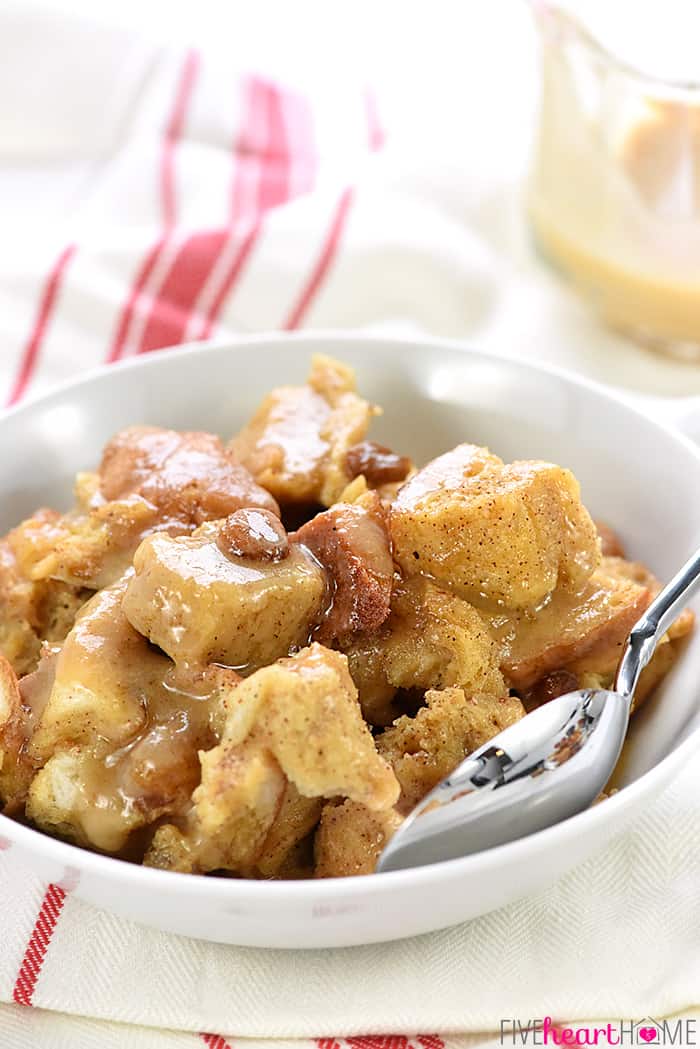 So call it baked French toast casserole if you like and pop it in the slow cooker first thing in the morning for an ah-mazing breakfast. Alternatively, start it a bit later and serve it for brunch. Either way, this recipe won't be tying up your oven or your stovetop, which is a pretty invaluable quality during the holidays when oven real estate is at its prime. 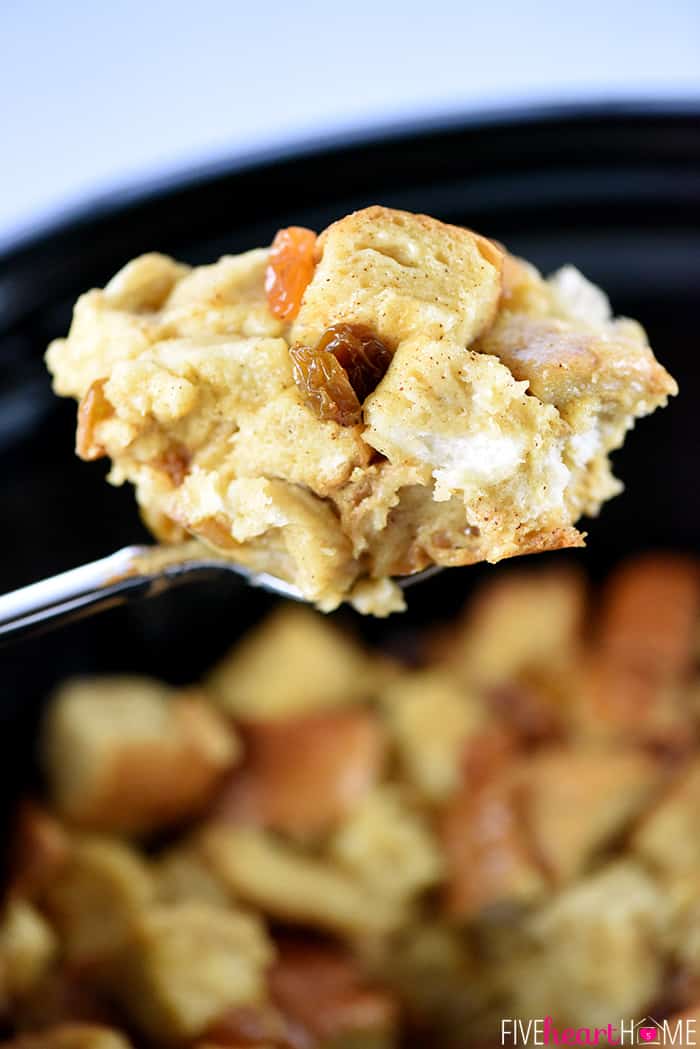 However, if you'd like to highlight the bread pudding angle of this bread pudding, make it for dessert! Bread pudding can often be found on the dessert menu at fancy restaurants, making it feel like an extra-special treat.

That being said, nobody has to know that this Slow Cooker Eggnog Bread Pudding is extremely quick and easy to prepare. It's great for gatherings because it can be served warm straight from the crock pot. And the addition of eggnog gives it a festive holiday twist!

This bread pudding is actually not overly sweet as-is. It has an undertone of eggnog that's pleasant without being overpowering. It's flecked with juicy golden raisins that add little bursts of fruit. And it's drizzled with the most luscious eggnog syrup to take it from that's-pretty-yummy to oh-my-gosh-over-the-top!

Seriously, don't skip the eggnog syrup. It takes about 5 minutes to whip up and it adds extra moisture and yet another layer of eggnog flavor to this dish. It also allows everyone to adjust the sweetness of their breakfast/brunch/dessert to their liking. Just like adding your preferred amount of maple syrup to a pile of pancakes, you can drizzle your bowl o' bread pudding with as little or as much eggnog syrup as you desire. 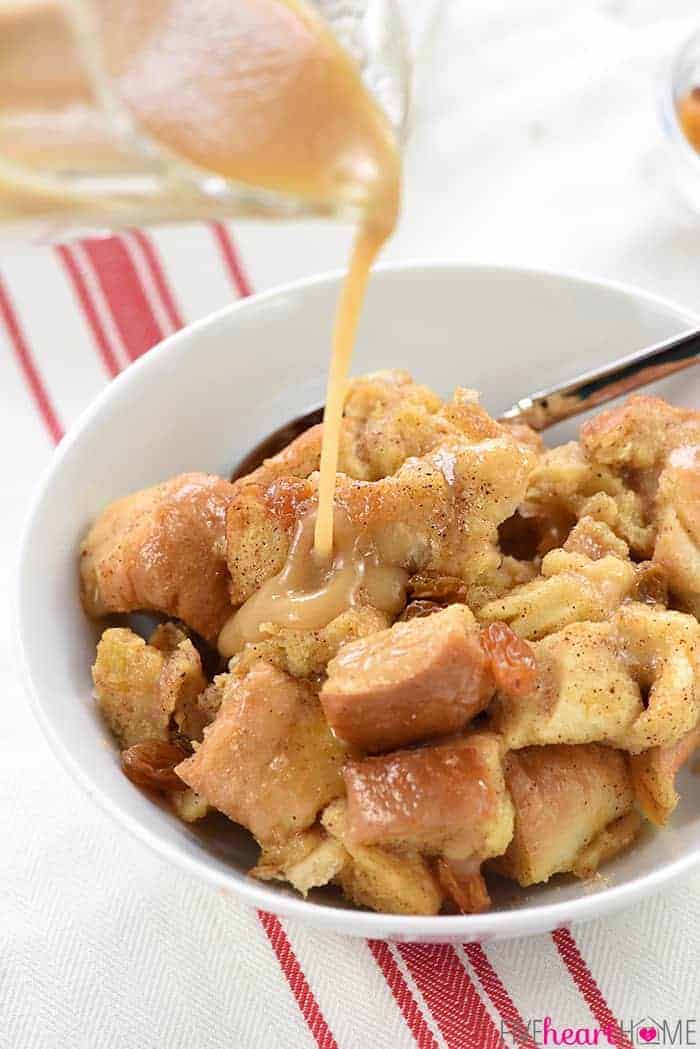 My primary tip for this recipe is not to overcook it, which can result in dry bread pudding that sticks and darkens around the edges. Through extensive trial and error while writing a certain slow cooker cookbook (ahem), I've learned that slow cookers can vastly vary in how hot they run and how quick they cook.

So if you have a newer-model slow cooker that runs hot, your bread pudding is probably going to be done in the minimum recommended cooking time, if not even sooner.

On the other hand, if you have an older-model, cooler-running slow cooker, your bread pudding will probably take longer to cook through.

Just keep an eye on it the first time you make it and all will be well. 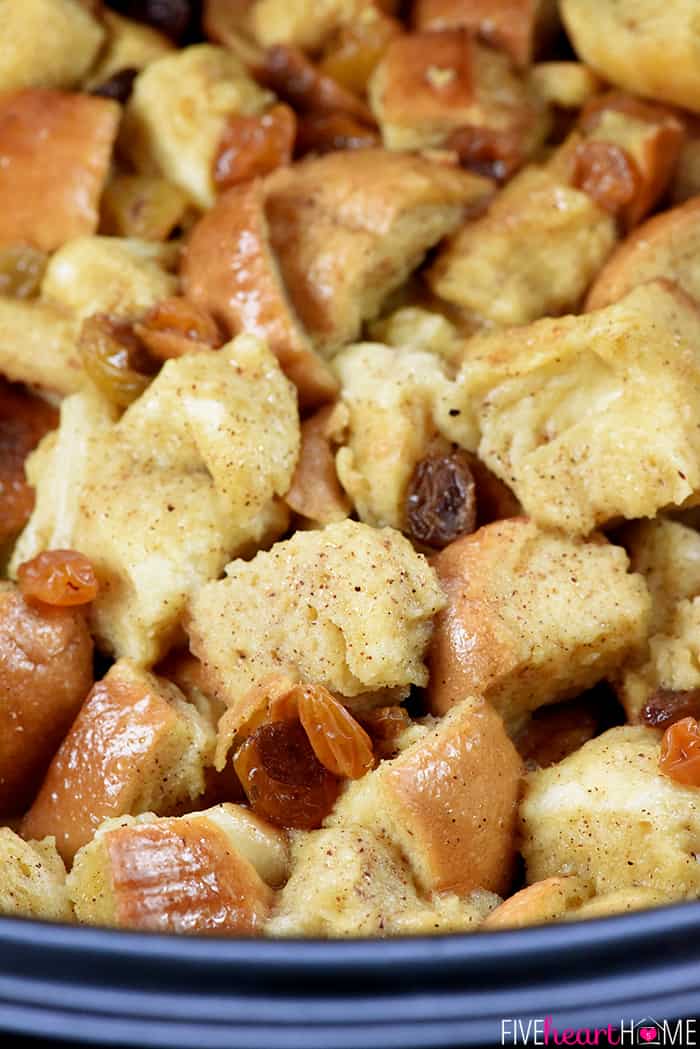 So who's ready for a holiday-worthy breakfast or brunch that can do double duty as dessert? Rumor has it that a splash of rum can enhance Slow Cooker Eggnog Bread Pudding even further, for those of you into boozy treats...though that suggestion is not necessarily recommended for breakfast.

Ten days 'til Christmas, y'all! And I'm telling you...this is just the kind of easy, delectable recipe to add to your menu to help you make it through. 😉 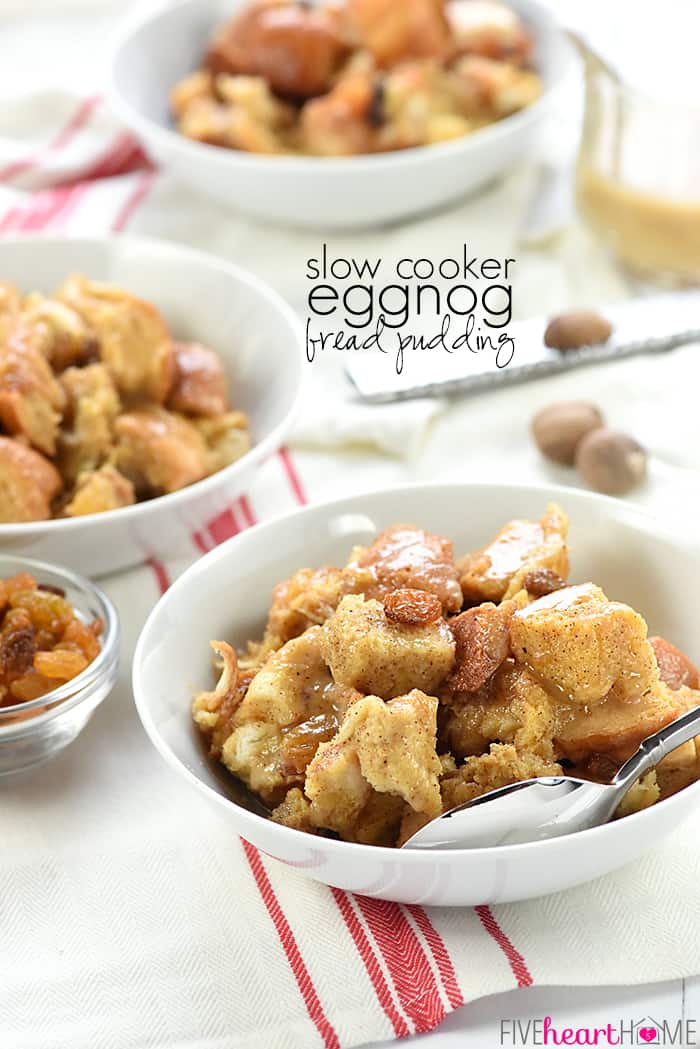 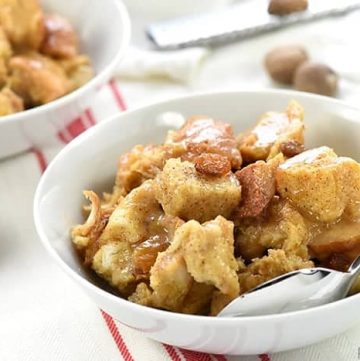