Sweet, creamy Eggnog Pudding with Whipped Cream is an easy, make-ahead treat that comes together in minutes for a festive holiday snack or special Christmas dessert!

A big thanks to Goldrich eggs and Acorn Influence for sponsoring this post.
As always, all thoughts and opinions are my own. #GoldrichYolk

For me, there are three flavors that define December: gingerbread, peppermint, and eggnog. I've previously shared a few gingerbread recipes on the site, so I feel like we're covered in that area. I have a yummy peppermint treat in the archives and another one coming your way next week. But the only eggnog deliciousness I've posted thus far on Five Heart Home was my Overnight Eggnog Baked French Toast that, despite going a little bit crazy on Pinterest right now, has been on the site since last winter. So I think it's high time for a new eggnog recipe before 2014 comes to a close, don't you?! 😉 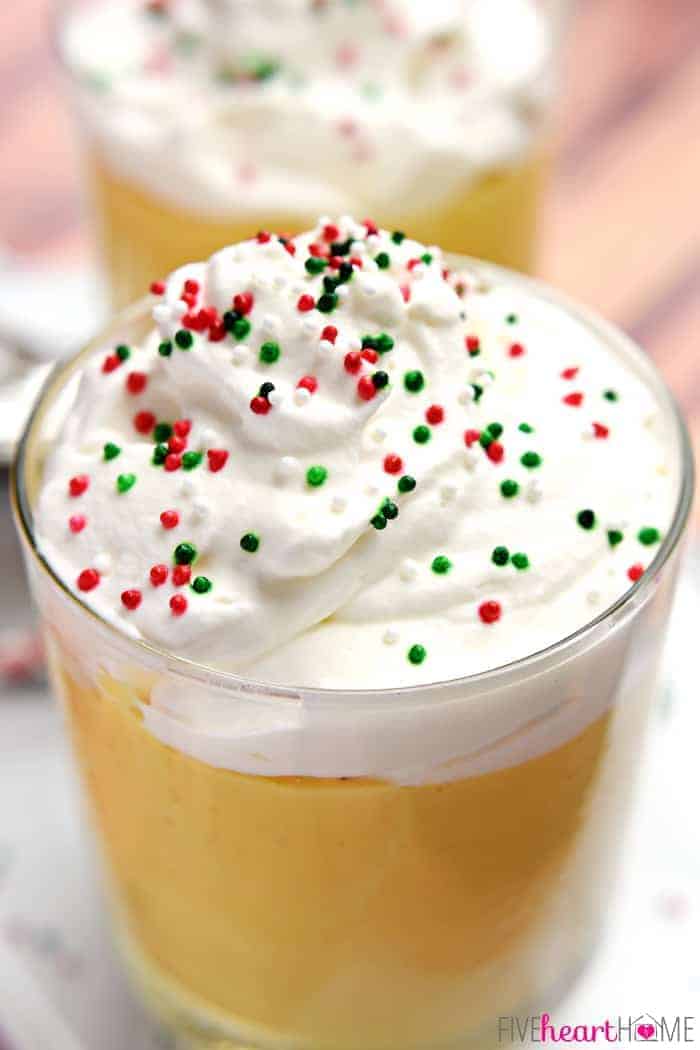 Today I bring you Eggnog Pudding, topped with freshly whipped cream and cheery holiday sprinkles! Actually, if not for needing to take photos, I probably would have topped my pudding with a sprinkle of nutmeg instead, since that's my favorite way to drink eggnog. But the sprinkles look so festive and my kids are crazy about them, so they serve as a fitting garnish around the holidays. 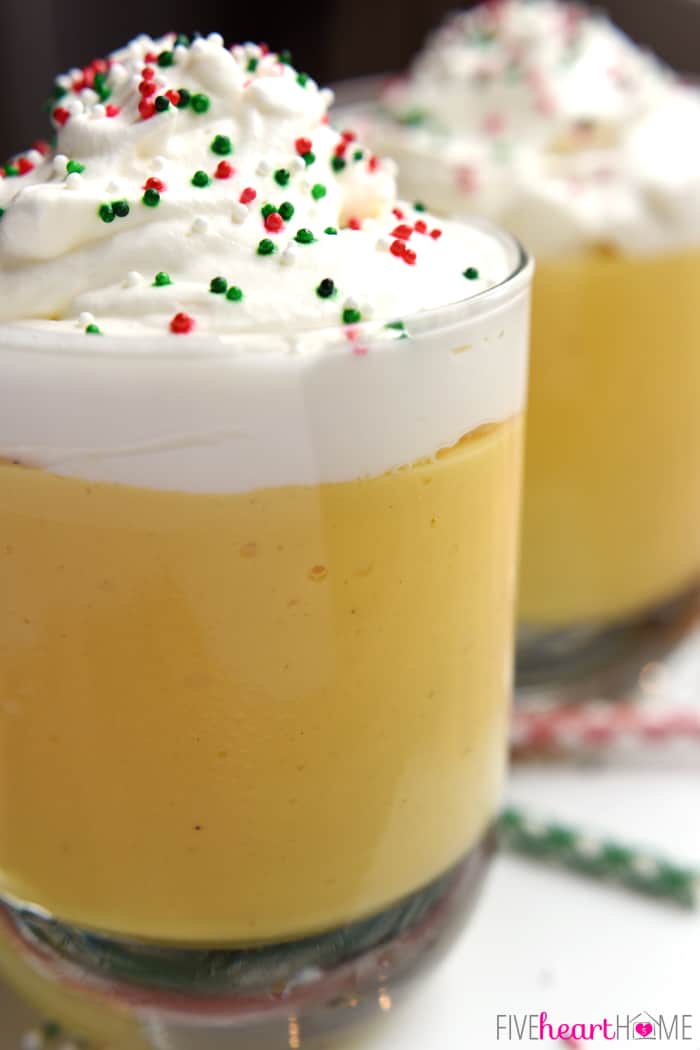 People typically fall into love eggnog or hate eggnog camps. So if you're not a fan, I understand that you probably stopped reading ten sentences ago.

But if you happen to enjoy eggnog, I think you will go crazy over this pudding! It tastes just like eggnog...but, well, in pudding form. It's sweet and thick and creamy, and the airy whipped cream is a nice contrast in both flavor and texture. 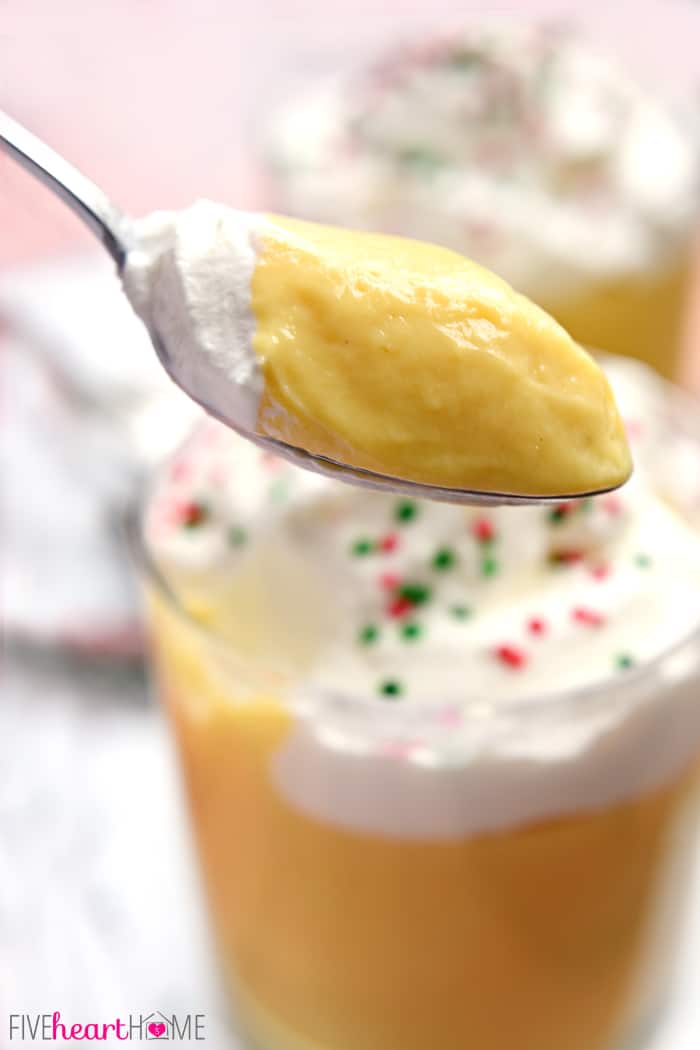 This simple-to-prepare pudding is made like just about any other pudding, incorporating sugar, cornstarch as a thickener, milk and flavoring (or in this case, eggnog), and egg yolks.

Last month, I tried Goldrich eggs for the very first time with great results, and I was excited to use them again in this recipe. I knew that their rich, vitamin-packed, golden yolks would enhance the deep golden color of the eggnog and the luxurious texture of the pudding...and I was right! 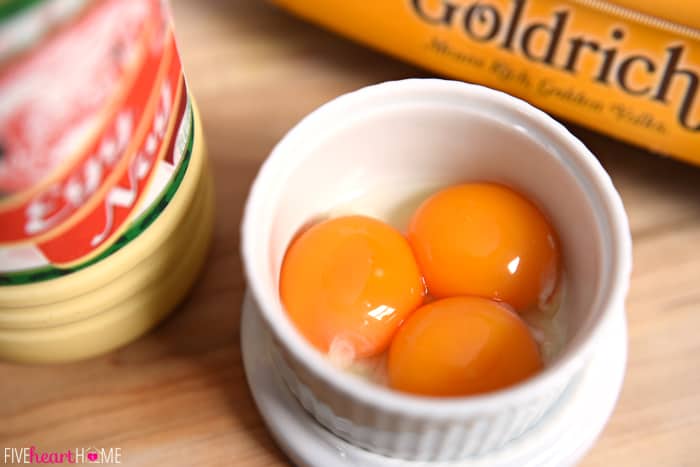 How to Make Eggnog Pudding

Homemade pudding is a cinch to make...you'll never buy the boxed stuff again! 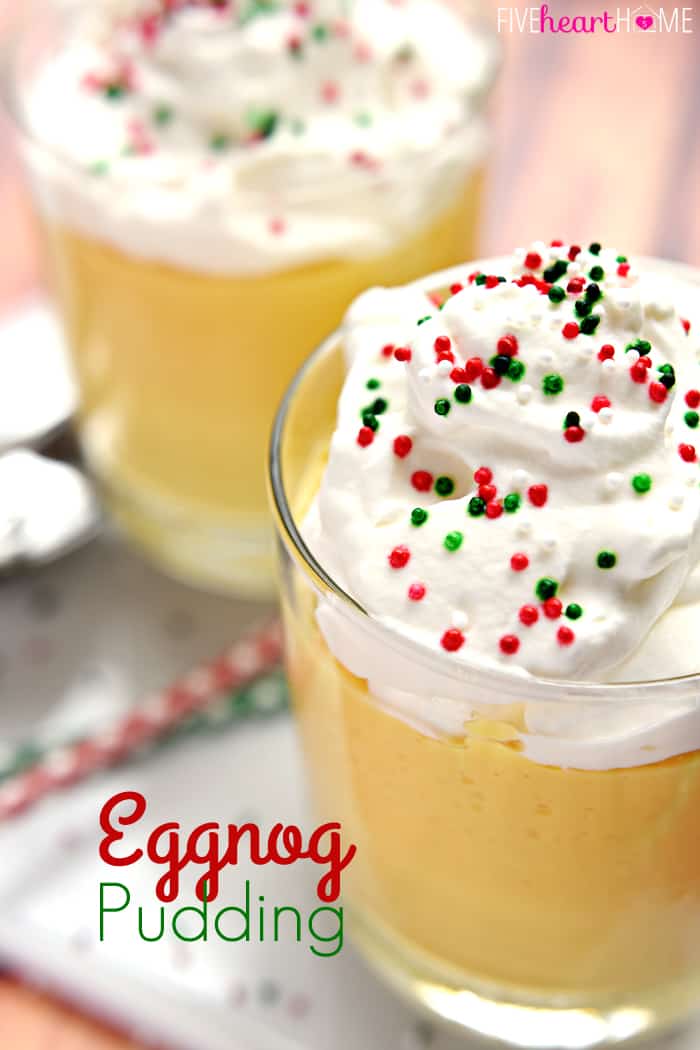 I love this recipe because, not only is it decadent and delicious, but it takes less than 10 minutes to throw together before popping it in the refrigerator for a few hours, resulting in the perfect, make-ahead Christmas dessert! When you're hosting a holiday party or dinner, it's nice to cut down on your last-minute party prep stress by utilizing as many recipes as possible that can be made ahead of time, and this one fits the bill.

To say that this Eggnog Pudding was a hit with my kids would be a huge understatement. My 2-year-old had a hard time keeping her nose out of the whipped cream (and her little mitts off my photo props) while I was attempting to take pictures of it, and my boys devoured it as a special treat one evening before bedtime while watching The Grinch. If you follow me on Instagram, you may also have already heard that this recipe led to an awkward moment between myself and the lawn guy. But you know what? It's so darn yummy that it was worth embarrassing myself for. 😉 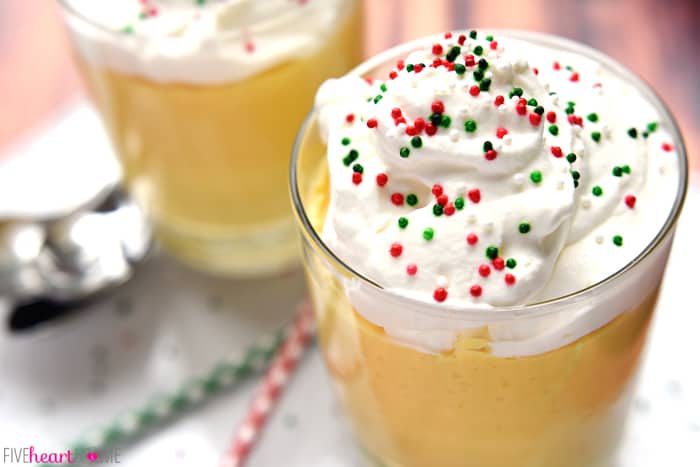 So here's the deal...the next time you have some extra eggnog and ten minutes to spare, promise me that you'll whip up a pot of homemade Eggnog Pudding. It's just the cool, tasty treat you've been craving this holiday season! 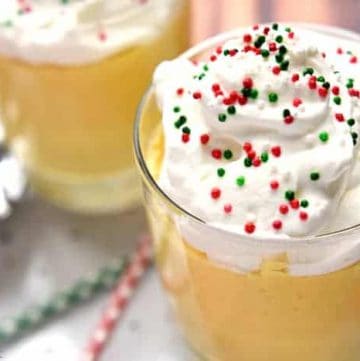