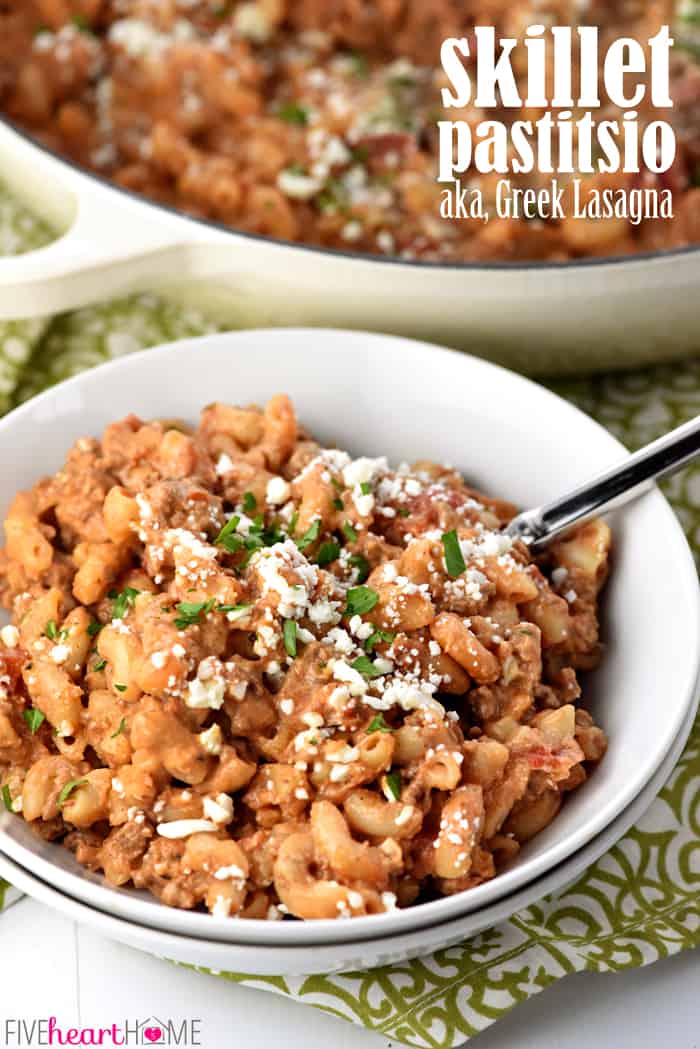 Several years back while watching the Food Network one Saturday morning -- as future food bloggers apparently do -- my old pal Ina was making a comforting, layered dish called Pastitsio that totally intrigued me. Perhaps it caught my eye because I had never heard of it before...or maybe it was because "Greek lasagna" sounded so good (yum)...or it could be because it would prove to challenge me as both a tongue-twister and a word that I'm consistently unable to correctly type on the first try. At any rate, I printed out the recipe...and proceeded to not make it for the next five years.

Well, I was recently getting ready to cook my family's beloved 30-Minute Skillet Lasagna for dinner when I realized that I didn't have any ricotta cheese...but I did have a whole tub of Greek yogurt. And it suddenly occurred to me that perhaps I could incorporate elements of a traditional Pastitsio recipe -- which typically entails multi-steps, several dirty pots, and homemade bechamel sauce, mind you -- into a ONE-POT SUPPER.

Yes! That's why I'd put off making Ms. Garten's recipe for so many years...I was waiting on inspiration to turn it into some easier... 😉 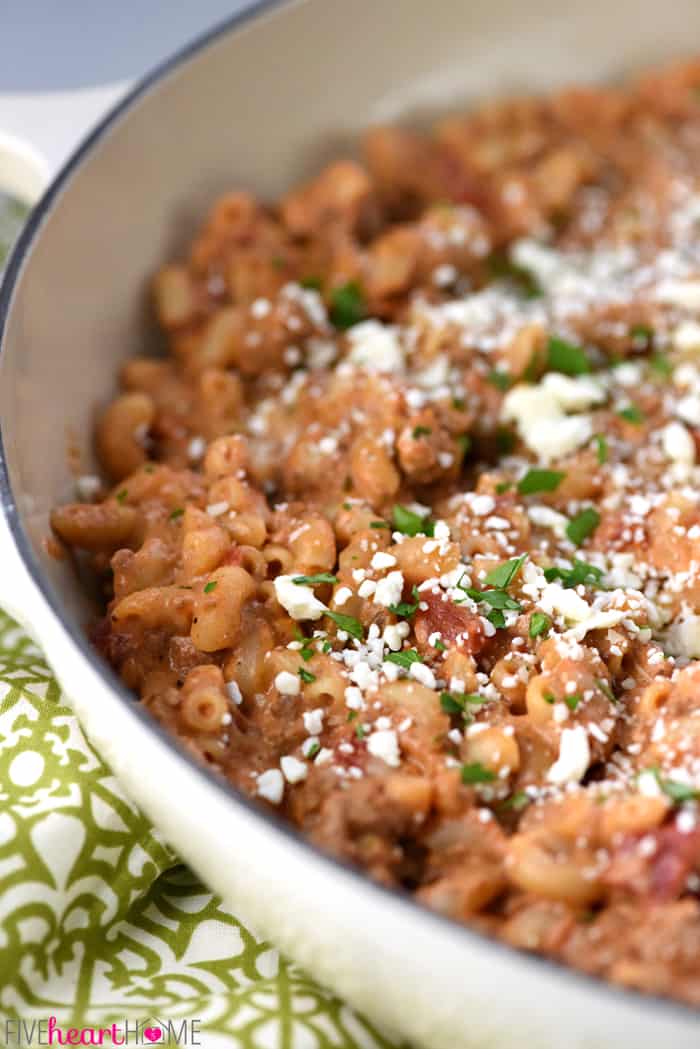 And so I took my tried-and-true skillet lasagna recipe and tweaked the ingredients, as inspired by Mediterranean flavors and traditional Pastitsio recipes.

And the result? LOVE.

I now have another one-pan supper in my repertoire, made with ingredients that I typically have on hand but with flavors that are a little bit out of the ordinary...yet still totally kid- and family-friendly. So let's break it down, shall we? 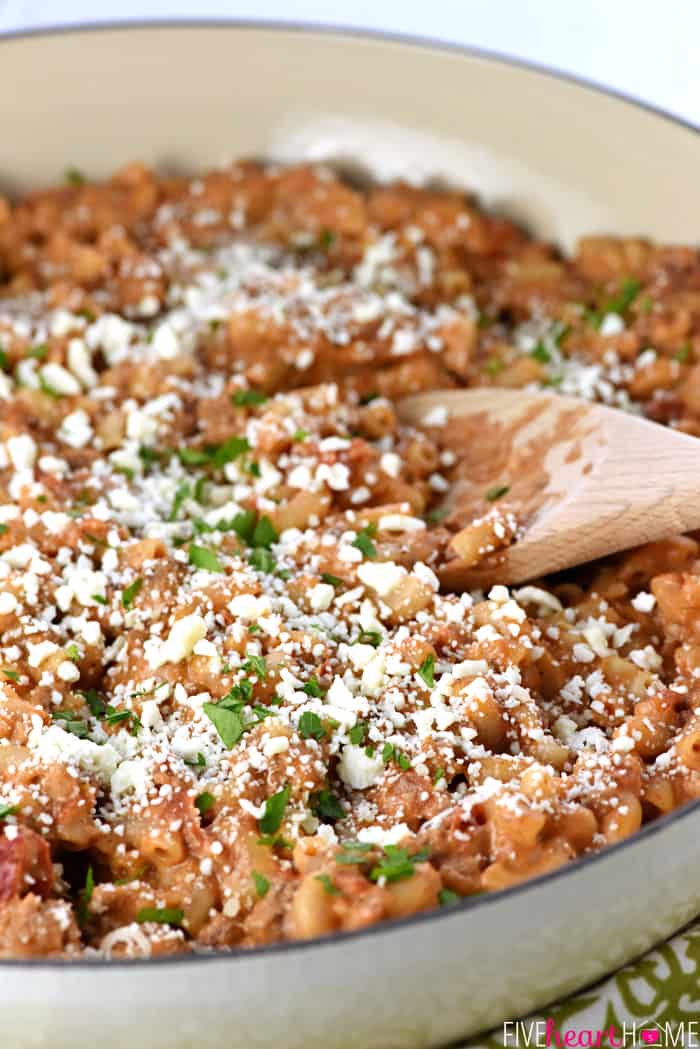 How to Make the EASIEST Pastitsio Recipe

For this effortless skillet version, however, I opted for:

As for other adjustments I made? 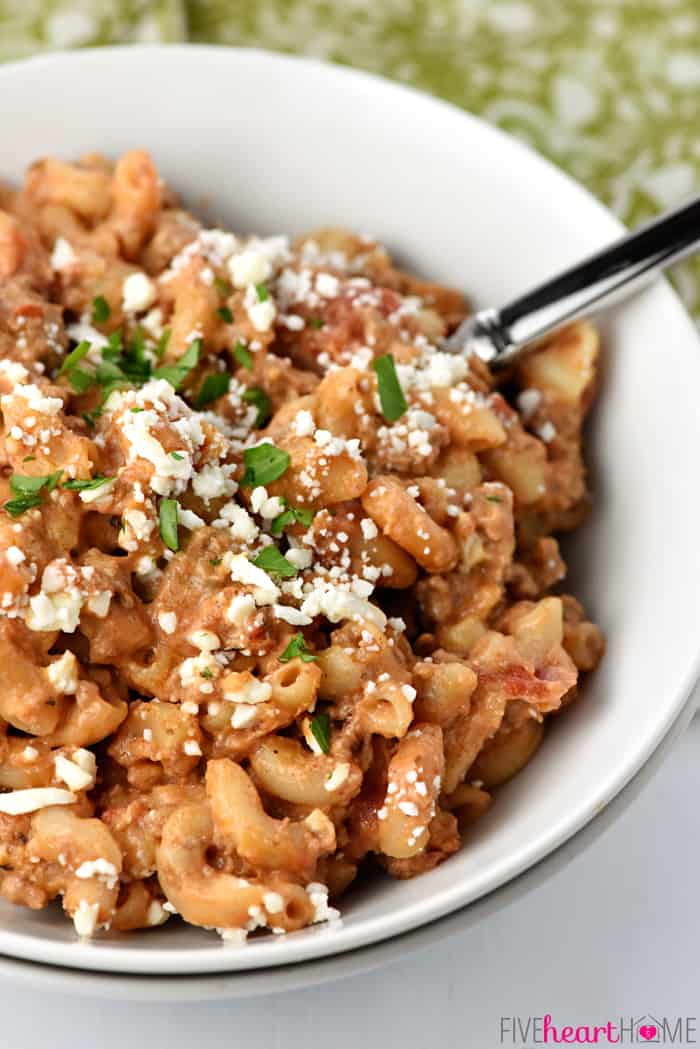 I did stay true to the spices of traditional Pastitsio recipes, however. After all, they're what set this recipe apart from a typical skillet lasagna or, you know, cheeseburger macaroni.

Now I'll admit right now that I'm not usually a fan of cinnamon in savory recipes, because when I taste cinnamon, it makes me think of oatmeal and snickerdoodles and apple pie. That being said, an undertone of cinnamon is a key flavor in Pastitsio.

So I added a somewhat conservative amount...and I actually enjoyed it. A lot! If you wish to be even more conservative than I, you can cut the amount in half to just ⅛ teaspoon. But promise me that you won't leave it out completely, because it really does make this recipe taste like, well, what it's supposed to taste like. 🙂

This easy skillet Pastitsio recipe is also flavored with garlic, oregano, a pinch of nutmeg, a touch of cayenne, and a good bit of freshly grated Parmesan stirred in at the end. The combination of ingredients is just a little bit unique (unless you're Greek, of course) but completely delicious, meaning that my kids loved this dinner. And so did my hubby. And so did I!

And when I'm referring to it as a "30-minute meal," I honestly don't even think it took that long to whip up. Simply measure everything out ahead of time so that the various ingredients are ready to add at the appropriate times and I'm telling you...this recipe is so quick and easy to make. 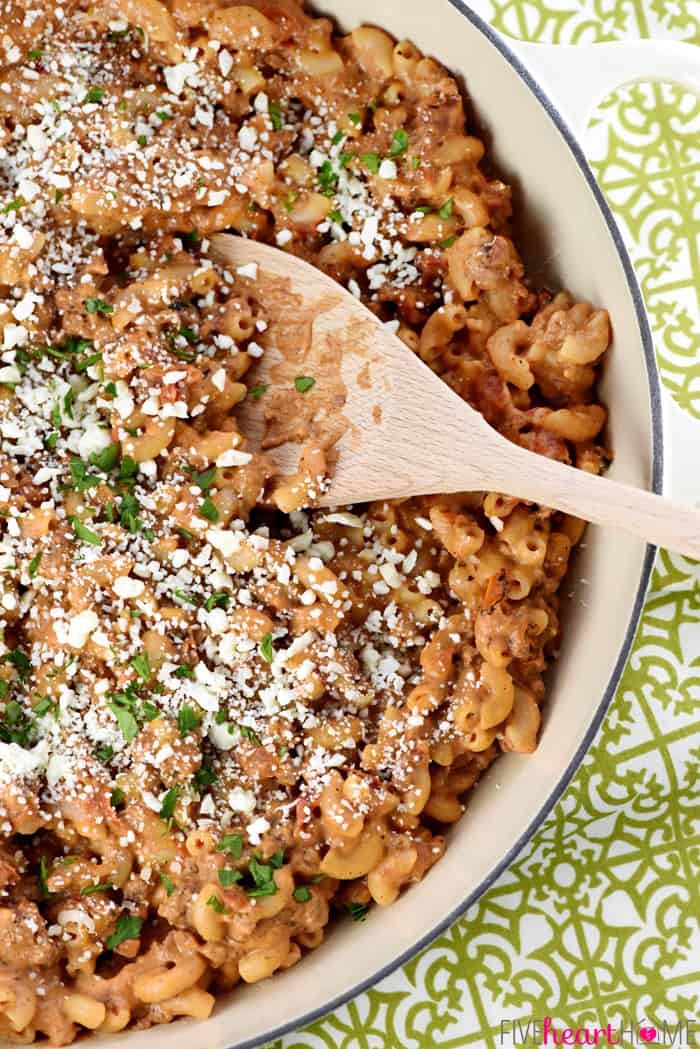 So what are you waiting for? Skillet lasagna meets Greek lasagna just got a makeover.

This simple, one-pan Pastitsio recipe is effortless, it's yummy, and it's guaranteed to make you shout opa! 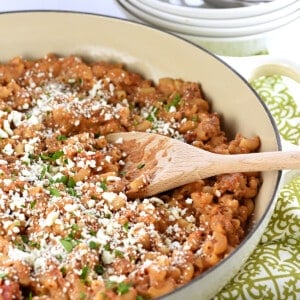