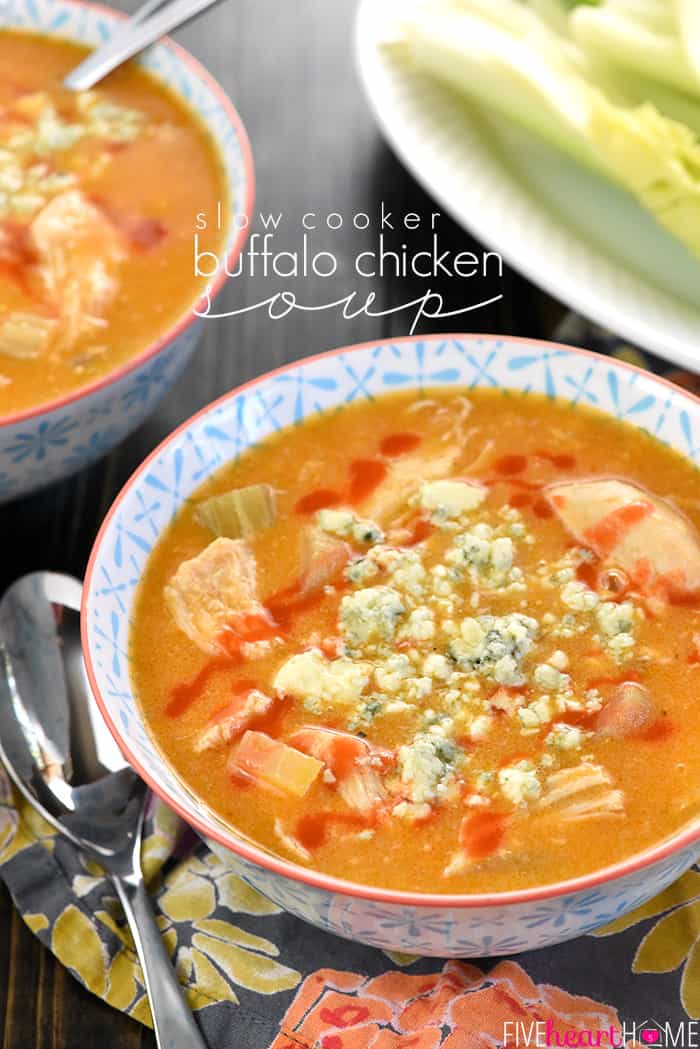 Happy Friday, friends! Wow...it's been quite a week. From the bottom of my heart, THANK YOU to everyone for your kind, positive, and supportive words about the release of my new cookbook earlier this week! I'm honored that so many of you ordered it and are already enjoying recipes from it -- seriously, pinch me. 🙂

Today's Slow Cooker Buffalo Chicken Soup recipe fits right in with the theme of my cookbook -- slow cooker dinner recipes made with real, unprocessed ingredients -- but this is actually one that didn't come from the cookbook. Rather, I devised it a few weeks ago with the intention of posting it last week...before my computer decided to crash and spent the better part of the week in the shop getting fixed (BOOOOOhissssss). But thankfully, my computer is back and I'm back, and with all of the slow cooker cookbook-related excitement this week, I thought it would be an appropriate time to share this recipe after all! 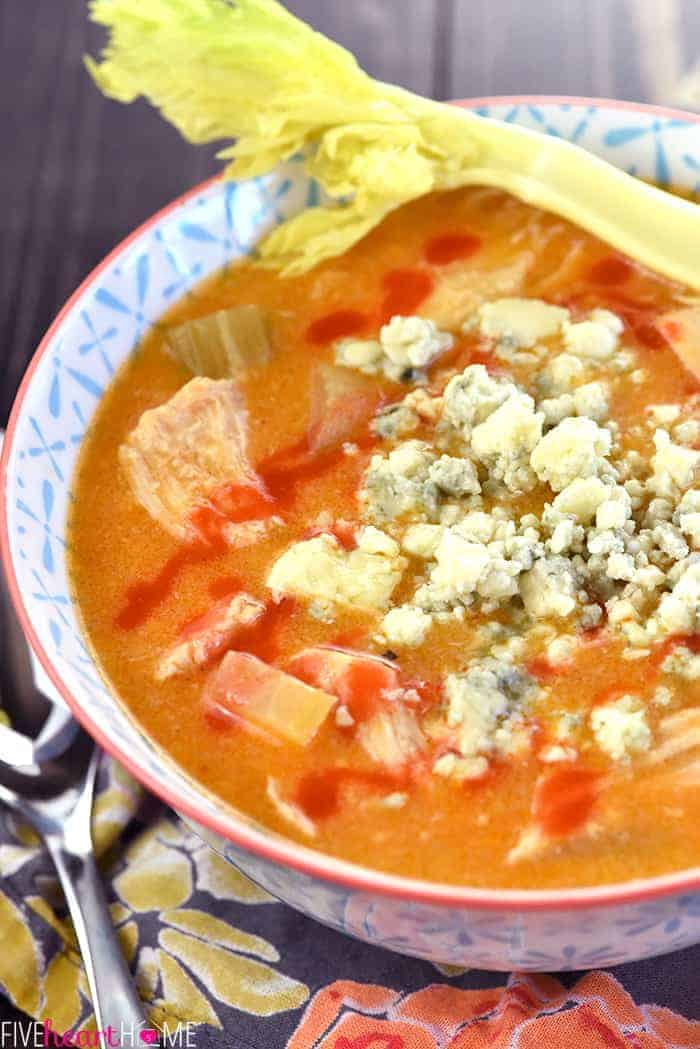 Back when football season kicked off at the end of August, I noticed that my Buffalo Chicken Dip recipe started going crazy on Pinterest, which inspired me to come up with another way to enjoy the flavor of Buffalo wings this fall. And who doesn't love soup?! But since I wanted to ensure a creamy soup, I decided to borrow a technique that I used in two different recipes in the cookbook.

A vast number of recipes in the cookbook require you to simply put everything in the slow cooker and let it do its thing for a prescribed amount of time. But there are two soup recipes in the cookbook -- Chicken Cordon Bleu Soup and King Ranch Chicken Soup -- that I wanted to be particularly creamy. So since I also had the goal of avoiding processed ingredients in the cookbook (I'm looking at you, canned condensed soups), I decided to achieve that thick, silky consistency by whipping up a quick, 5-minute, chicken broth-based stove top sauce. 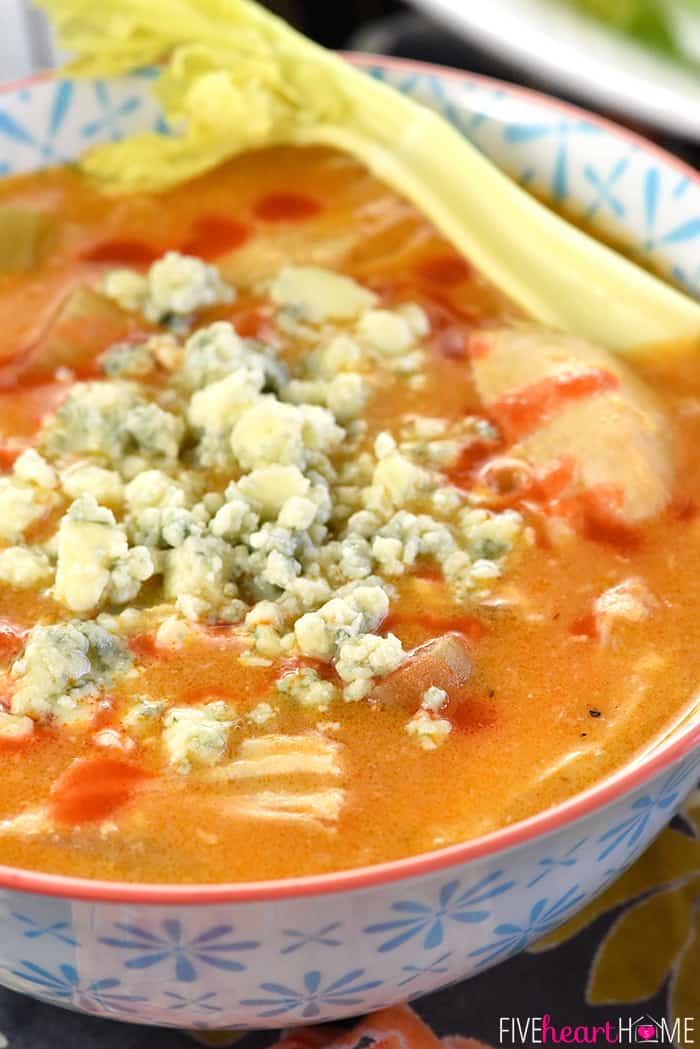 How to Make Buffalo Chicken Soup

So that's exactly what I did for this Slow Cooker Buffalo Chicken Soup as well!

Once the chicken is cooked, simply shred it and stir a bit of sharp cheddar into the soup before garnishing with crumbled blue cheese and a drizzle of wing sauce.

Shazam! Who knew that a simple soup could mimic all of the bold, zesty flavors of Buffalo wings?

Using the amount of wing sauce dictated in this recipe, your soup should be spicy but not over-the-top. My kids thought it was warm but they could still eat it. My husband thought it was fairly mild.

So unless you're really sensitive to heat, I think ⅓ cup wing sauce is a good starting point. Of course, you can always start with less and stir in more, to taste, at the end of the recipe. You can also make the recipe per the directions and then simply put a bottle of wing sauce on the table to allow everyone to adjust the heat of their individual bowls to their liking.

I used Frank's RedHot Original Cayenne Pepper Sauce in this recipe, which I like because it has totally straightforward ingredients -- cayenne peppers, vinegar, water, salt, and garlic powder.

I found an all-natural blue cheese dressing to use as well. That being said, while blue cheese is a customary complement to Buffalo wing sauce, some people don't particularly care for it. So if you happen to identify with that segment of the population, feel free to substitute ranch dressing in the soup...and then garnish with extra grated cheddar instead of crumbled blue cheese. 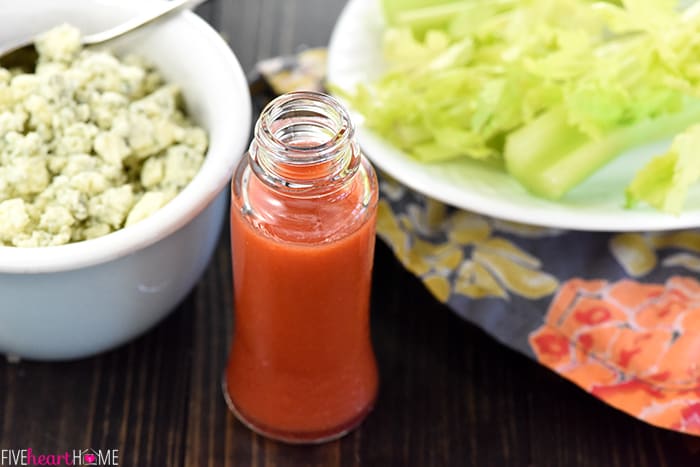 Finally, since Buffalo wings are traditionally served with celery, I decided to cook some right into my soup, as well as serve sticks of raw celery on the side. And let me tell you, my non-veggie-loving daughter was so excited about that part -- ha.

So if you're one of the folks who already pinned my Buffalo Chicken Dip, this soup is for YOU! Slow Cooker Buffalo Chicken Soup is zippy, it's creamy, and it's oh-so-cozy. In fact, I'm pretty sure my own little family will be enjoying it several times a month through football season...and I do believe I'd consider that a touchdown of the crock pot variety. 😉 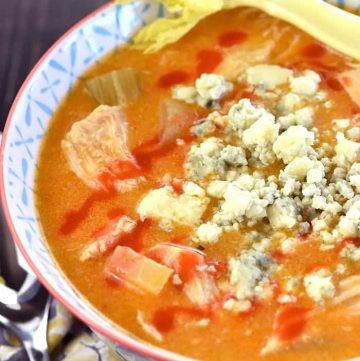