This Slow Cooker Chicken Noodle Soup is the BEST, wholesome and extra flavorful thanks to a few secret ingredients. It's the perfect get-well-soon recipe for making it through cold and flu season, but it's so delicious that you'll get requests for it even when nobody is sick!

Anytime a member of my family gets sick, I get the instant, insatiable to urge to whip up a giant, nourishing pot of homemade chicken soup. So, since it's impossible for a family of five to avoid occasionally getting sick, this Slow Cooker Chicken Noodle Soup has come to be the silver lining that we all look forward to during cold and flu season! 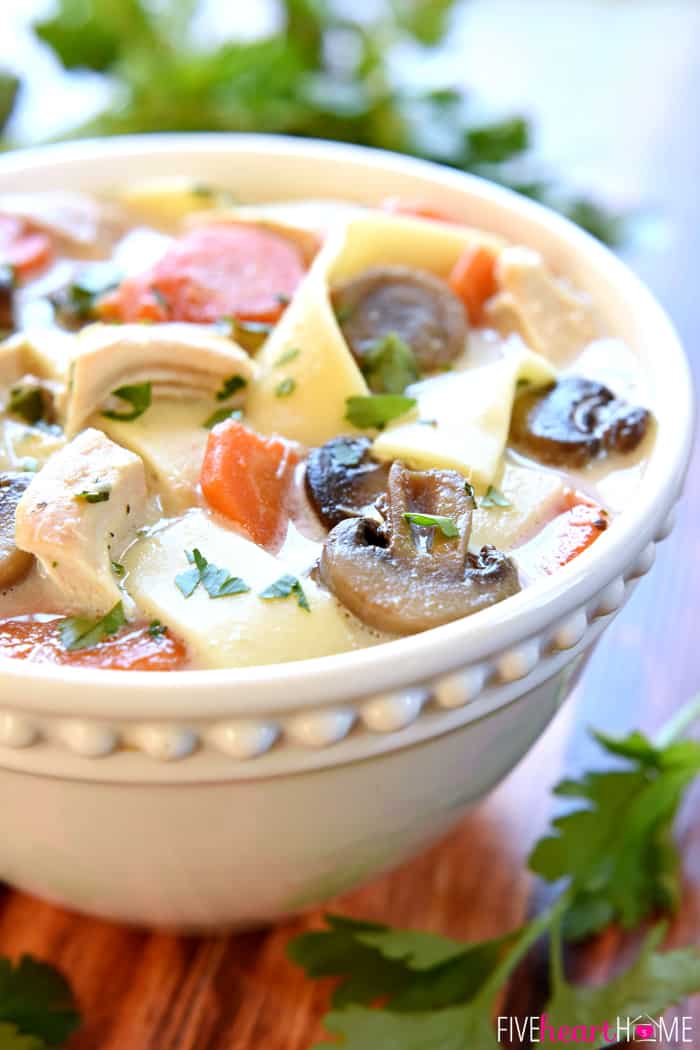 When I make homemade chicken soup, I prefer using skin-on, bone-in chicken. Not only do I believe that cooking the bones in the broth makes for an extra-nourishing soup, but I also think the skin lends richer flavor. I end up skimming the fat and discarding the skin and bones at the end anyway.

But if you prefer to use skinless, boneless chicken, that will work just dandy, too. I would recommend using a mixture of white meat and dark meat, because I think the dark meat stays a bit moister and more flavorful and is a nice balance to the lighter white meat. But again...it's your soup. So if you're a fan of all white meat, have at it! 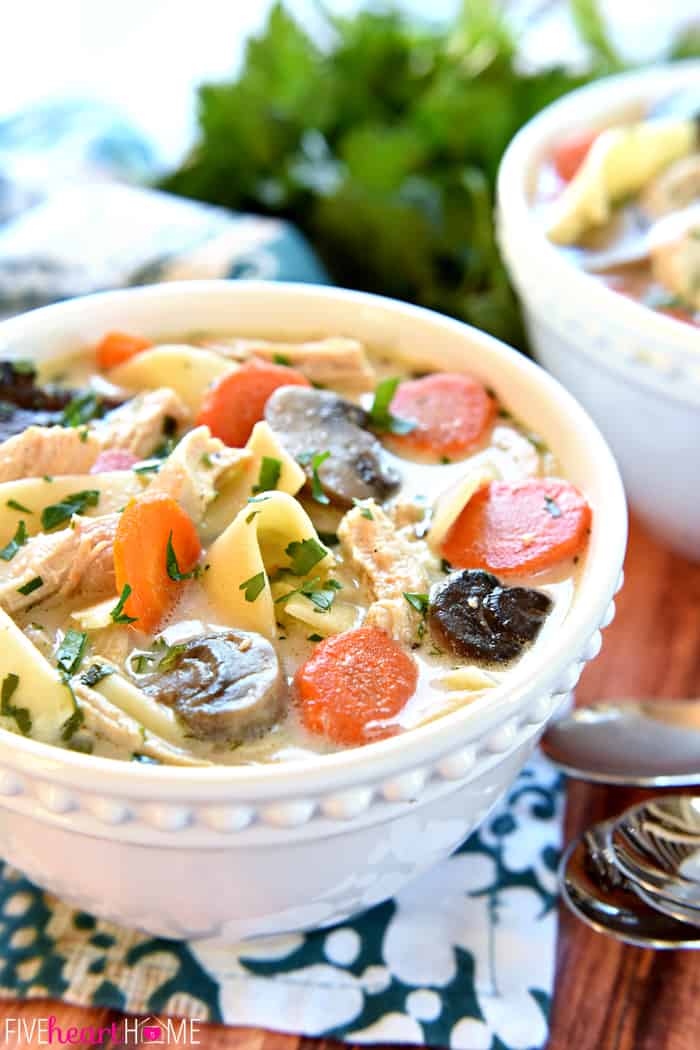 I really do think this is THE BEST tasting chicken soup out there. There are a few secret ingredients added towards the end of the recipe that, in my humble opinion, take this soup from good to amazing. 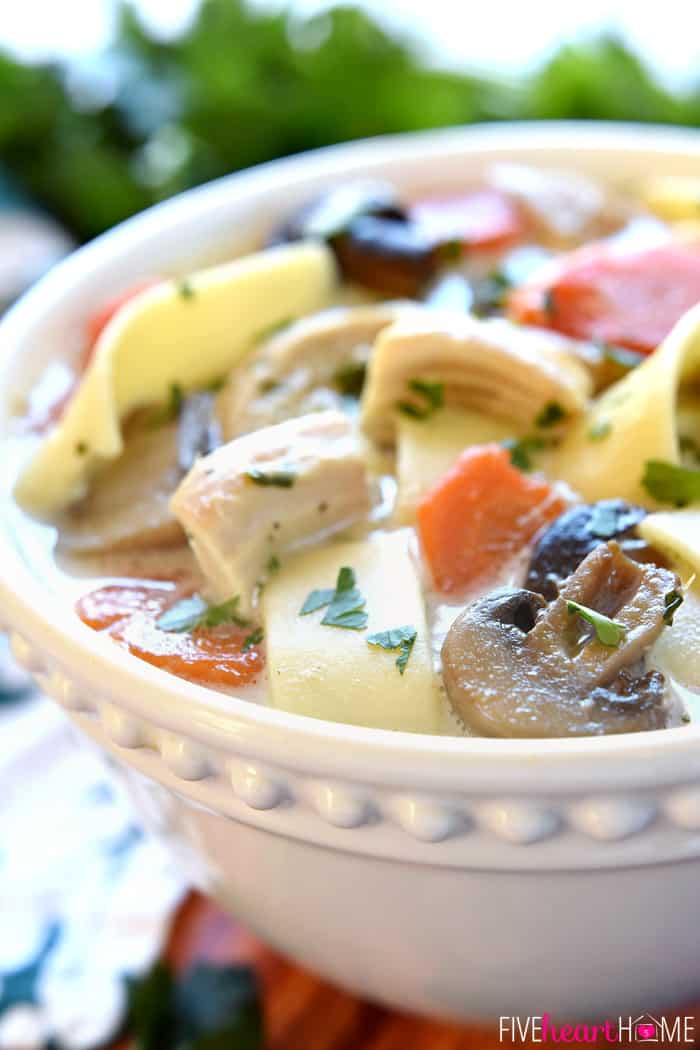 I'll be the first to admit that, while I use beer and wine in some of my recipes, I'd never cooked with sherry before. So the first time I ever made this recipe, I was a little skeptical...but I bought a bottle and hoped for the best.

Well let me tell you that it never ceases to amaze me what a tablespoon or two of sherry does for this soup! Just like the other ingredients that make this Slow Cooker Chicken Noodle Soup special, the inclusion of sherry is not obvious or in-your-face. It's just another subtle flavor layered in with all of the other subtle flavors to ultimately create a recipe that's better-than-average.

If you don't already have sherry in your pantry or liquor cabinet, I recommend buying a bottle of regular dry sherry...not cooking sherry (which contains oodles of salt and other unpleasantries) and not sweet sherry (which would be too, well, sweet).

I bought a bottle of medium dry sherry to use specifically for this recipe. Once opened, sherry should last indefinitely...which is a good thing since the only time I use it is when I make chicken soup. But this soup wouldn't be the same without it, so I'm happy to let that bottle take up cabinet space.

A little bit of sherry can go a long way, so the first time you make this recipe, I suggest adding one tablespoon (and tasting before adding more) to determine whether you prefer more or less. 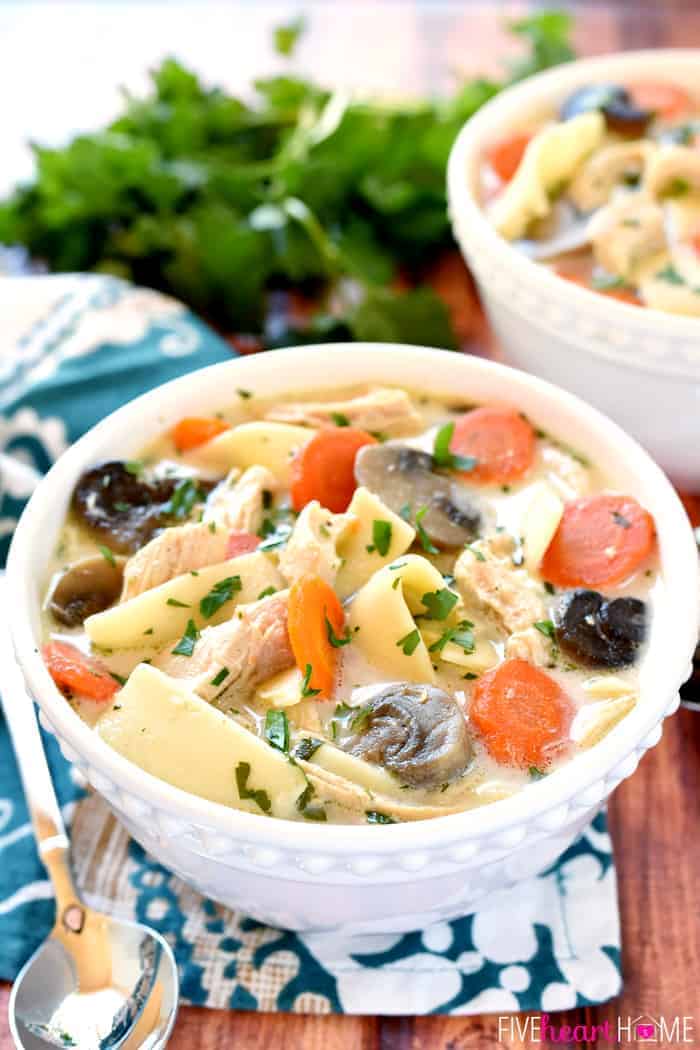 As for the veggies in this Slow Cooker Chicken Noodle Soup, feel free to customize them to your taste.

And that's it...a simple crock pot recipe that will have you craving chicken noodle soup even when you aren't sick! In fact, as much as I'm looking forward to spring and a welcome respite from cold and flu season, you can bet I make this soup all year long when someone at our house gets taken down by a bug.

In fact, if I leave this printed recipe in a convenient location, perhaps the hubby will feel inspired to throw the ingredients in the slow cooker the next time that sickly someone happens to be me... 😉 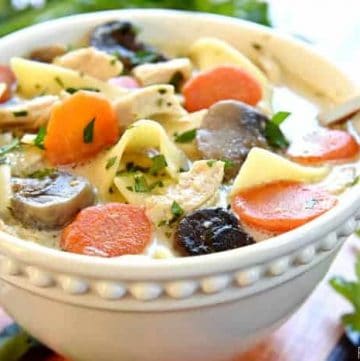