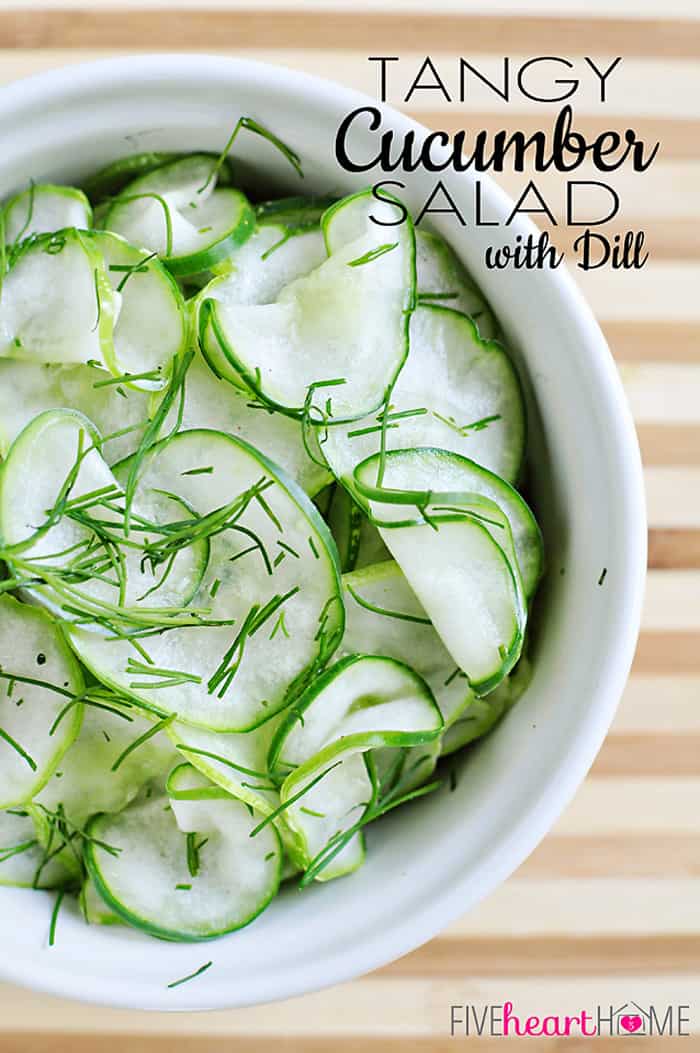 Crisp, thinly-sliced cucumbers are marinated in a simple dressing of white wine vinegar, salt, pepper, sugar, and fresh dill for a refreshing, sweet-and-sour salad that makes a perfect summer side dish!

I realize that I've been bombarding y'all lately with quite a few recipes featuring garden-fresh summer produce...and I can't promise that I'm quite done yet. Case in point: today I'm sharing the BEST Tangy Cucumber Salad with Fresh Dill!

I've already got a Creamy German Cucumber Salad in my repertoire. But for years I've been on a mission to find the perfect, vinegar-based cucumber salad recipe. Well, by golly...I think I've finally struck gold!

As its name implies, this salad is tangy and refreshing. The paper-thin cucumbers still retain a crisp bite thanks to the skin remaining intact, and the simple dressing is both sweet and sour, thanks to a bit of sugar and a base of white wine vinegar.

I think I'm particularly enamored with the flavor of this salad because my mom is from Germany and every time we visit our overseas relatives, we enjoy the tastiest salads dressed in simple, white vinaigrettes. That's exactly what these cucumbers remind me of! It really is a case of simple is best. 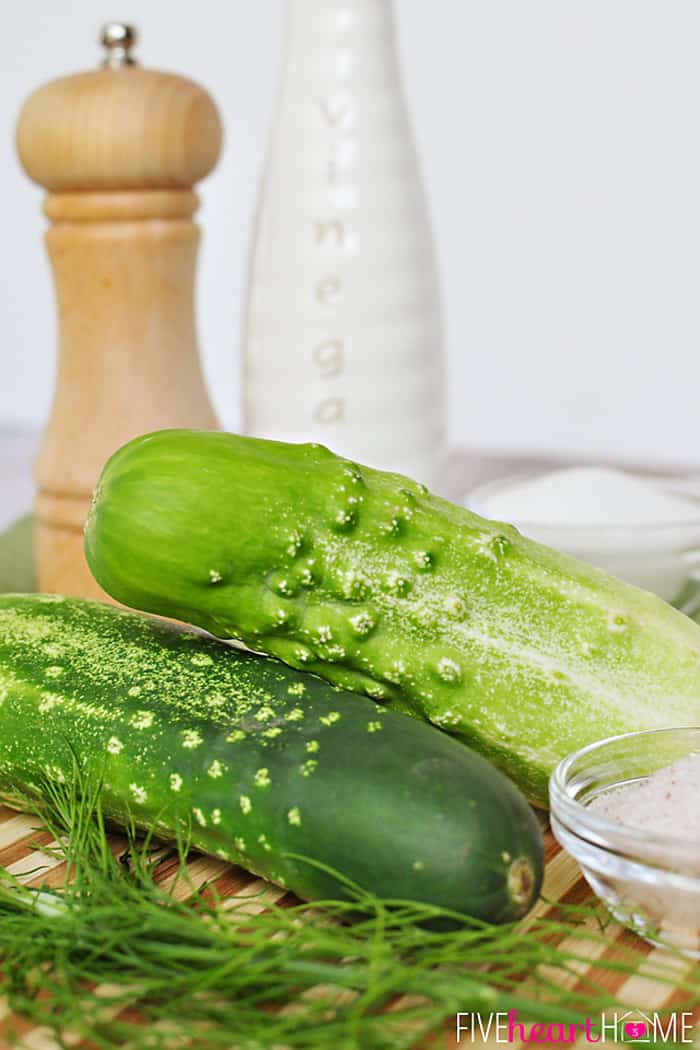 This cucumber salad is also incredibly easy to prepare. I do feel it's very important to get your cucumbers sliced as thinly as possible, particularly since you're not going to be peeling them. Unless you're a knife-wielding prodigy, that's probably going to be most easily achieved using a mandoline slicer. If you don't already have one, I highly recommend investing in an inexpensive mandoline. My mandoline comes in quite handy any time I want to make a cucumber salad such as this, or when I'm making a variation of scalloped potatoes or certain apple desserts. It takes up hardly any cabinet space when I'm not needing it, but it makes such a difference in the outcome of the final recipe when I have reason to use it.

I will warn you, however, that a mandoline slicer can be very dangerous if you're not paying attention! Let's just say my fingernails have saved the skin from being shaved off of my fingertips a time or two. If you're slicing manually, just make sure to go slowly and use the handguard when whatever you're slicing becomes small enough. And unless it has a blade cover, don't store a mandoline in a drawer where your (or a small somebody else's) hand might accidentally skim the sharp, sharp blade when reaching for something else. (With young children in the house, I actually store my mandoline in its original box in a high cabinet.)

Now that I've made you too paranoid to ever want to use a mandoline... 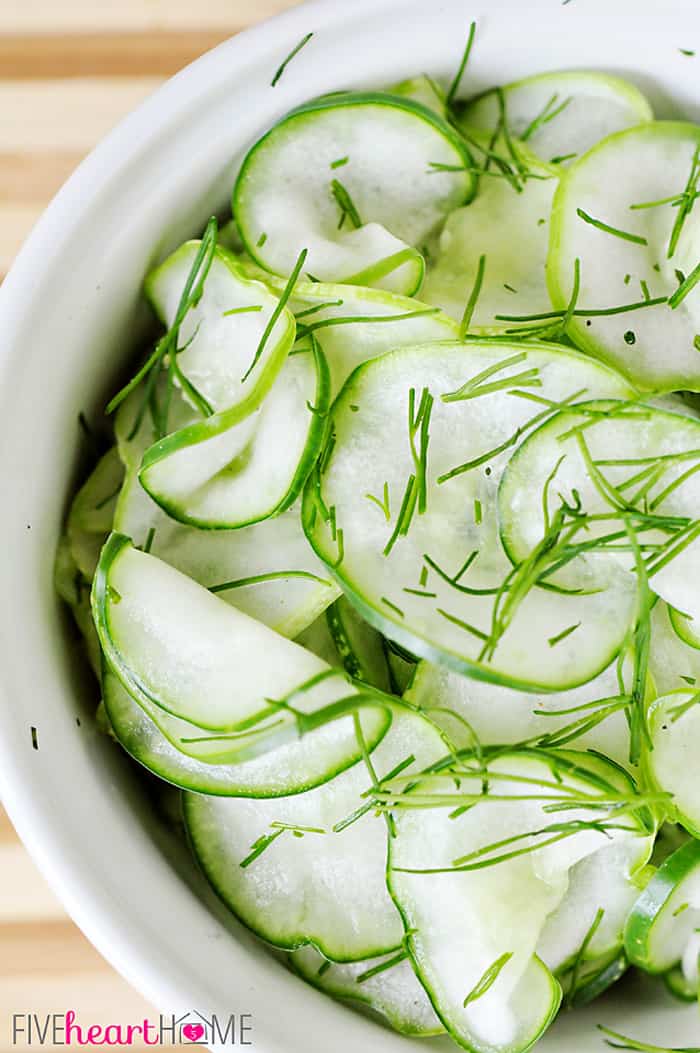 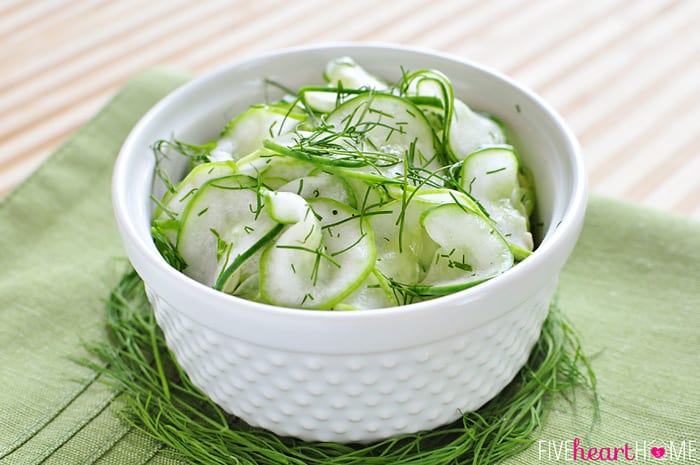 One last hint...don't skimp on the fresh dill! It really does make the salad. I can't think of any flavor that complements cucumbers better than dill, and using fresh rather than dried will really make this salad pop. 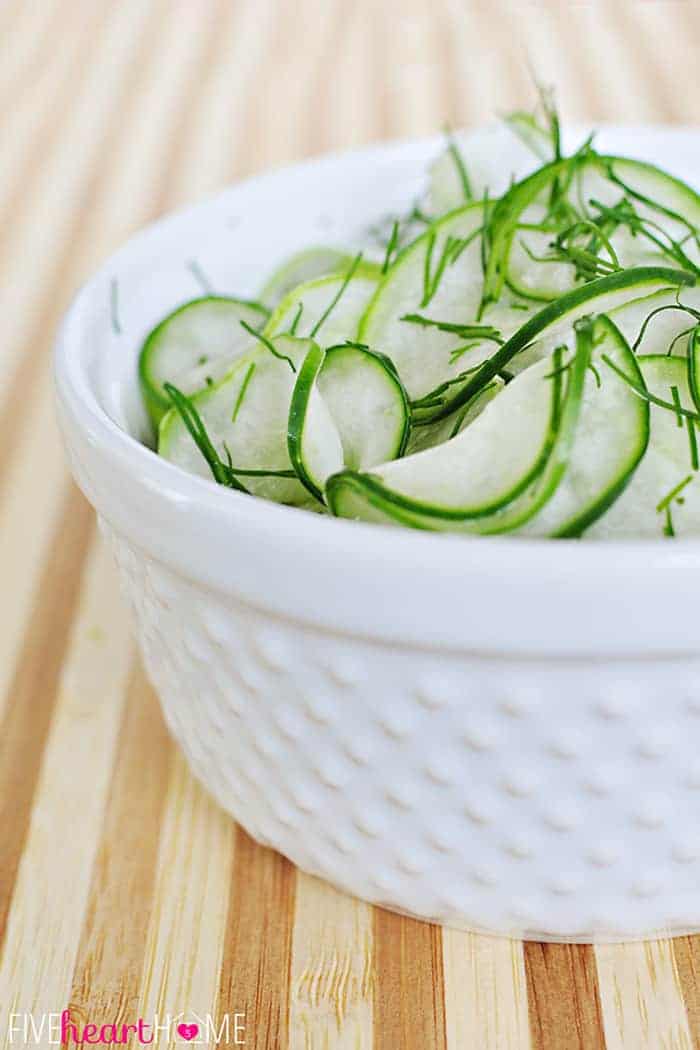 So there you have it...a simple, scrumptious Tangy Cucumber Salad with Fresh Dill that will have family members licking their plates clean and friends begging for the recipe! Or, in the case of my picky four-year-old, this was a salad that had him eating all of his vegetables before anything else on his plate. And those, my friends, are called Darn Good Cucumbers. 😉 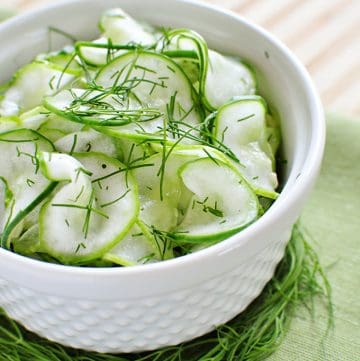