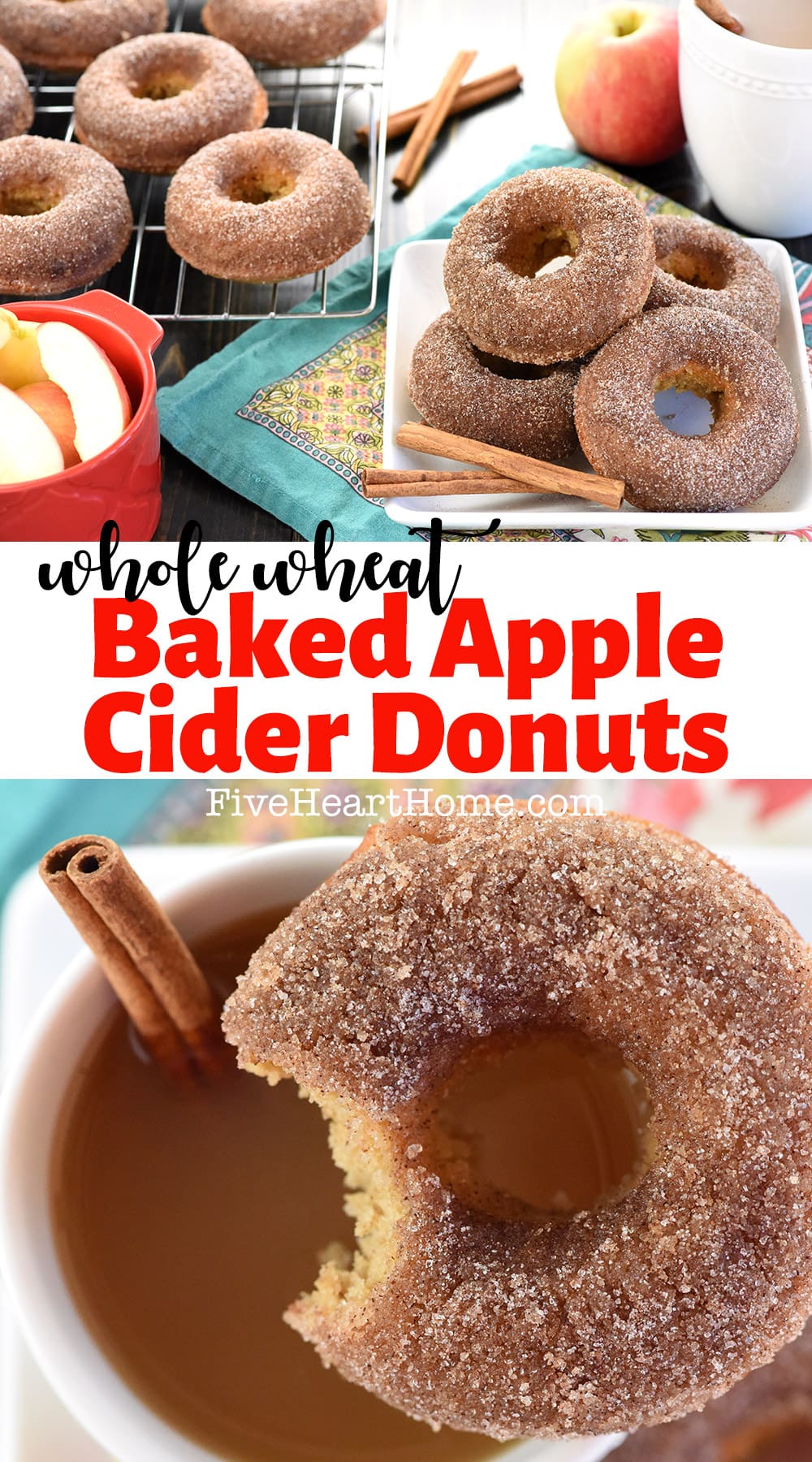 Baked Apple Cider Donuts are 100% whole wheat and delicately spiced. They're tender on the inside and coated in crunchy cinnamon sugar on the outside for a tasty fall breakfast treat!

This past Saturday, the middle child celebrated his birthday. He and his big brother both had flag football games that morning, but the birthday boy was apparently experiencing a touch of Lucky Number 7 magic as he proceeded to score half a dozen touchdowns. Granted, we're talking about 1st grade teams here, and that means that a given flag football game is often more akin to a track meet.

But regardless, the newly-minted 7-year-old was quite proud of himself, and rightfully so. When asked what healthy, nutrient-dense breakfast I must have fed him that morning, I had to reluctantly answer *donuts*. And I'm talking about the sugary, fried, frosting-covered, birthday-celebratory kind...not the whole wheat, Baked Apple Cider Donut beauties you see here today.

Despite the fact that they're more wholesome than their traditional donut shop counterparts, these Baked Apple Cider Donuts are still very much a delightful breakfast treat.

I basically took my popular Lemon Sugar Baked Donut recipe and gave it a fall twist.

For further commentary on the ingredients, keep reading... 😉

I also decided that apple + cinnamon could stand up to whole wheat -- as already proven by my ever-so-yummy Whole Wheat Apple Cinnamon Muffins.

So I swapped out all-purpose flour for whole wheat pastry flour.

The pastry part is important, as whole wheat pastry flour has a lighter flavor and texture (more comparable to white flour) than regular whole wheat flour. But it still retains the wholesome nutritional benefits of 100% whole wheat...because that's what it is!

Finally, I love me a good sugar coating on a donut, since the crunchy texture is a beautiful contrast to the soft, tender interior.

So I decided to forgo frosting or glaze on these Baked Apple Cider Donuts and stick with a melted butter dunk followed by a shower of cinnamon sugar.

It may be predictable, but c'mon...it's a classic. In fact, it's almost like apple cake meets Snickerdoodle, and there can't possibly be anything wrong with that scenario.

How to Make Them

These Apple Cider Baked Donuts are surprisingly quick and simple to make:

Step #5 should probably say, "Do you best not to scarf down half of the batch in one sitting." 😉

To sum it up, these Baked Apple Cider Donuts are a bit less guilt-inducing than regular ol' donuts.

They'd be a special treat on a weekday morning, a delectable breakfast on a brisk fall weekend, a lovely addition to a brunch buffet or autumn party spread, or a welcome surprise to package up and send to you favorite school teacher!

Or -- if your 1st grader is jonesing for a repeat performance of his career-high birthday touchdown record -- skip the donut shop and make these instead.

They may not be Wheaties, but at least you can say they're chock full of whole wheat. 😉 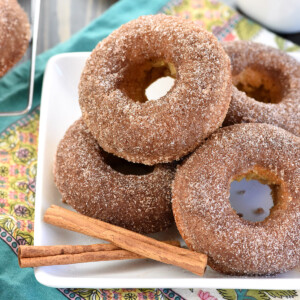