Well, October is in full swing and this past week began to feel decidedly autumn-ish around here. So after a few days of temps not quite reaching 90°F, I no longer have to feel like a poser as I bake with pumpkin and simmer soups...fall recipes are finally legit! 😉 And if you've been searching for the perfect muffin to celebrate fall (or enjoy all year long), look no further than these Whole Wheat Apple Cinnamon Muffins!

Y'all. These things are good.

First off, these Apple Cinnamon Muffins are extremely moist and soft, thanks to the plethora of diced apples folded into the batter.

I used Honeycrisps, because that's what I had on hand, and I finely diced them. The apples turned pretty soft, almost melting into my muffins.

If you prefer more noticeable chunks of apples in your muffins, cut them into larger pieces and/or use a variety of apple known for retaining its shape when baked, such as Granny Smith or Golden Delicious.

The fact that these muffins contain coconut oil, sour cream, and brown sugar also inhibits them from drying out.

I baked them up using whole wheat pastry flour, which lends baked goods a nice, light texture -- more akin to that of using white flour -- but with the wholesome nutritional benefits of 100% whole wheat.

I typically substitute whole wheat pastry flour for white flour in my pancakes, waffles, and just about any quick bread you can think of with excellent results. Along those lines, you'll find that these cinnamon-spiced muffins don't taste wheat-y...but because of all that whole wheat, you don't have to feel too guilty about eating a few, since I'm pretty sure you won't be able to stop at just one. 😉

Since they are rather on the wholesome side, with all of those apple chunks and coconut oil in addition to whole wheat, I decided to indulge in a teensy bit of decadence for the topping.

Now you could certainly enjoy these muffins perfectly plain.

Or you could sprinkle them with sparkling sugar for a bit of crunch.

You might even decide to top them with a streusel topping or a praline crumble, which is honestly what I intended to do when I first devised this recipe.

However, as often happens, I was running short on time, and dipping the tops in melted butter before pressing them into cinnamon and sugar ended up being a quicker way to finish off these babies.

And boy was I happy with that outcome! Because what could be a better complement to cinnamon-spiced muffins than a buttery, cinnamon-sugar coating on top?

These Whole Wheat Apple Cinnamon Muffins are sure to be a hit with your family and -- if they should be so lucky -- friends. As they bake, your house will smell like a fall, and the texture and flavor of the fresh-from-the-oven muffins are even better than the aroma. So go ahead and make a double batch! I'll venture a guess that they'll be gone in no time. 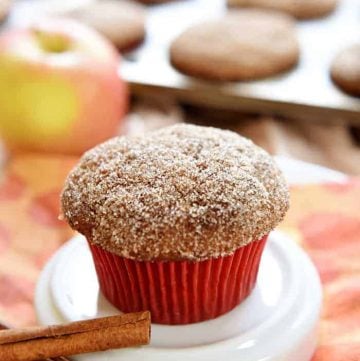