King Ranch Chicken Soup is creamy and comforting with all the flavor of the classic casserole...and easy to make in the slow cooker, Instant Pot, or stovetop! 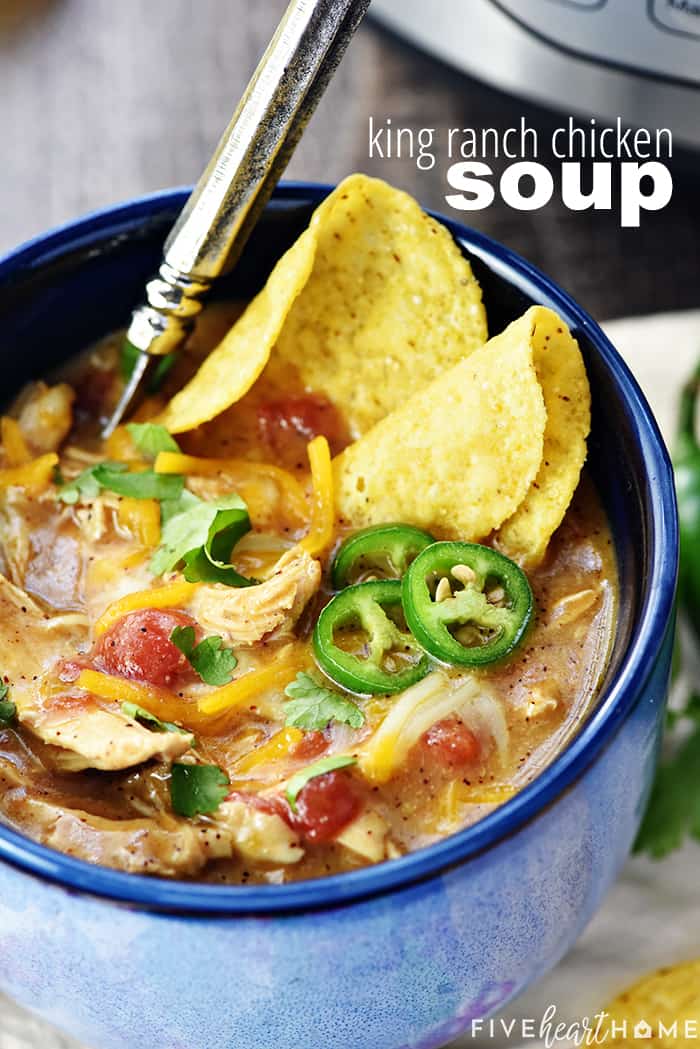 Winter is in full swing, which means that soup season is (still) upon us. I don't particularly care for the former, but I'm not sad at all about the latter...in no small part because I have King Ranch Chicken Soup to keep me warm! And after today...you will, too!?

Y'all have had King Ranch Chicken Casserole, right? If you live in Texas, your answer is probably a resounding YES. But if for any reason your answer is no, I'm gonna give you a minute to hop over and learn about one of the very best Texas comfort food recipes that our great state has to offer. Go ahead, now...I'll wait...

Alrighty! Glad to have y'all back. So now that you know about King Ranch Chicken Casserole, allow me to tell you about this wonderfully related soup that I concocted a few years back when I was writing my slow cooker cookbook. I was hard at work on my soup chapter, trying to think of favorite main dishes that I could convert into soups. I came up with yummy soup ideas like Bacon Cheeseburger Soup and Chicken Parmesan Soup and Chicken Cordon Bleu Soup. All of those made it into the final cookbook.

And guess what else did? Y'all are so smart...Slow Cooker King Ranch Chicken Soup! 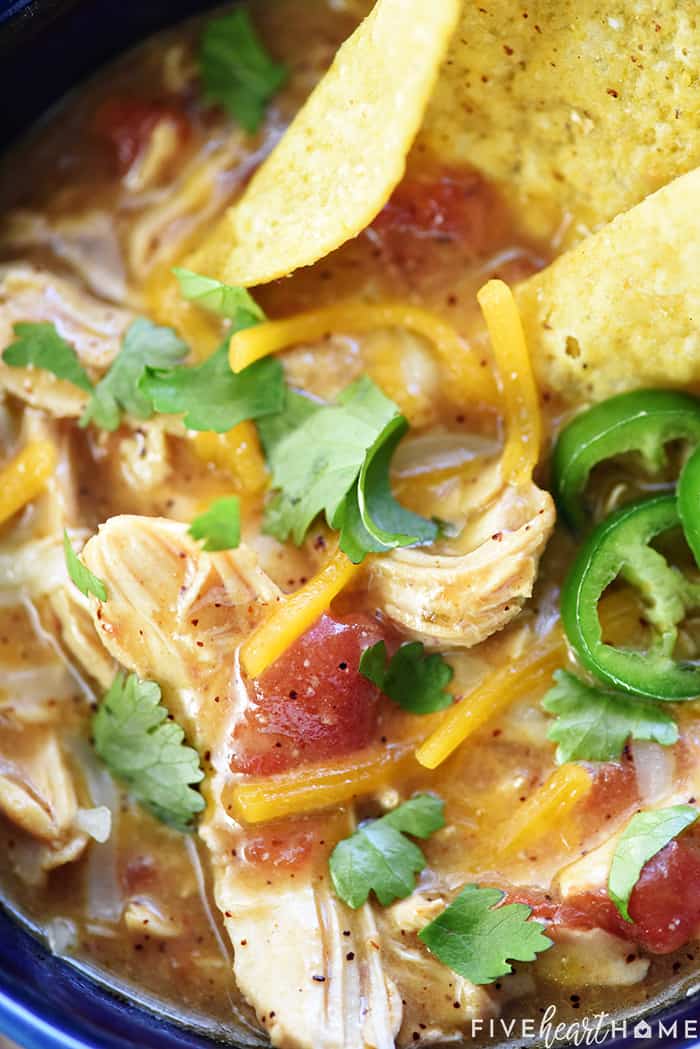 The funny part was that I loved how that recipe turned out SO MUCH that I allowed it to be shared as part of my cookbook promotion, once Real Food Slow Cooker Suppers was published. As a result, quite a few of my sweet food blogger friends made the Slow Cooker King Ranch Chicken Soup from my cookbook and wrote it up in posts on their blogs to share with their readers and help spread word about my cookbook.

And as a result of that, you can now find that cookbook recipe for Slow Cooker King Ranch Chicken Soup allllll over Pinterest and the world wide web...made in the crockpot, made from scratch, and made without "cream of X" soups. But today, I'm bringing you my same popular slow cooker soup in versions for the Instant Pot and the stovetop! (Because as much as I love my slow cooker, the Instant Pot has its advantages as well...) 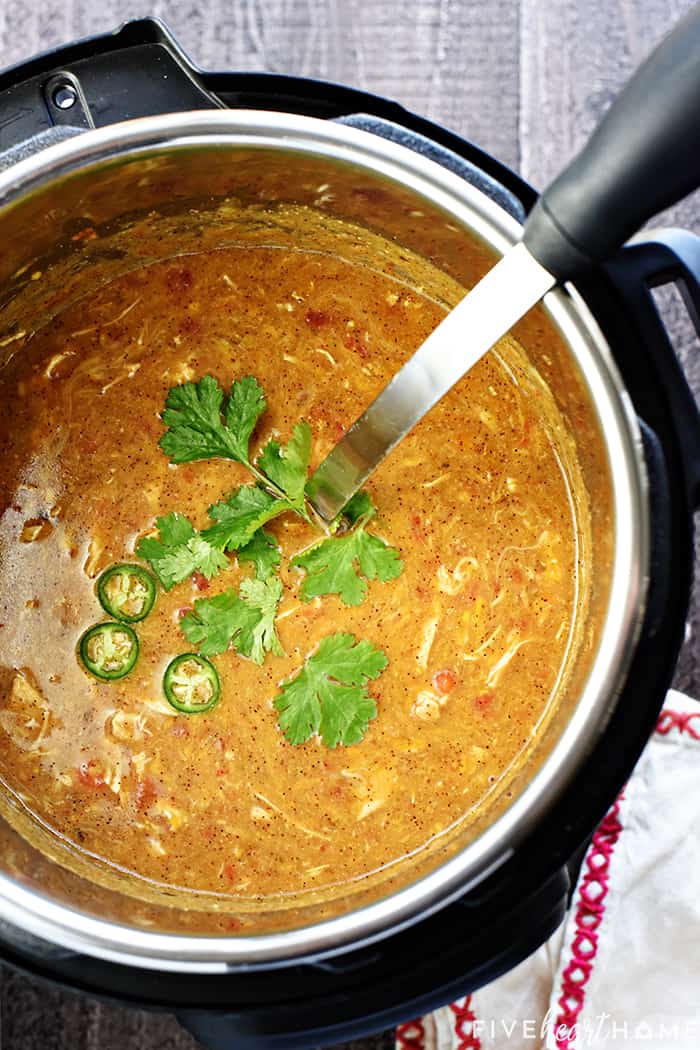 No Cream of "X" Soup

In case you've made King Ranch Chicken Casserole before with cream of mushroom and/or cream of chicken condensed soups, allow me to reiterate that there are no canned soups in this King Ranch Chicken Soup (or in my casserole recipe, for that matter). Instead, the base of the soup is a simple and quick sauce made with with butter, flour, and chicken broth.

I actually had the motivation to make this beloved soup recipe in the pressure cooker instead of the slow cooker one recent day when I was craving it for dinner but -- you guessed it -- I was short on time. And I actually really, really loved making this King Ranch Chicken Soup in the Instant Pot because there was only one pot to clean at the end of it!

The steps are ridiculously simple, y'all: 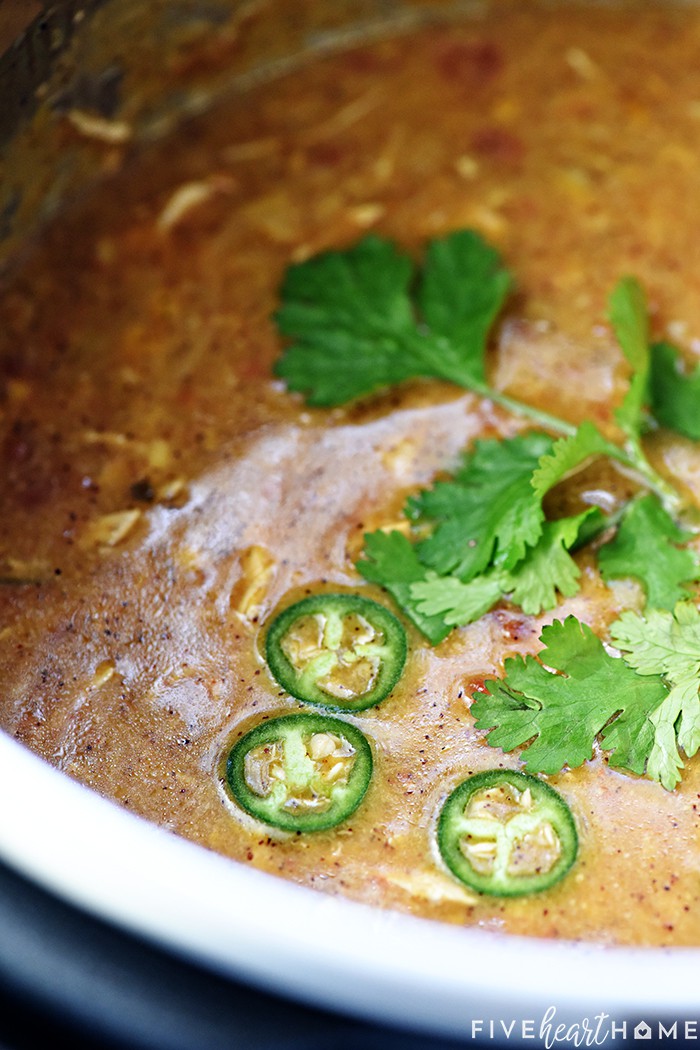 As much as I enjoyed making this recipe in my pressure cooker, I wanted y'all to have the slow cooker and stovetop options for this recipe as well...all in the same handy-dandy blog post! So for those slightly modified directions, scroll down to just below the recipe.

Regardless of which method you decide to try, this soup is such a zippy, cozy, delicious recipe that I think you're going to absolutely love it...whether you're already familiar with the flavors of King Ranch Chicken Casserole or not! I really hope you have a chance to try this one, friends.? 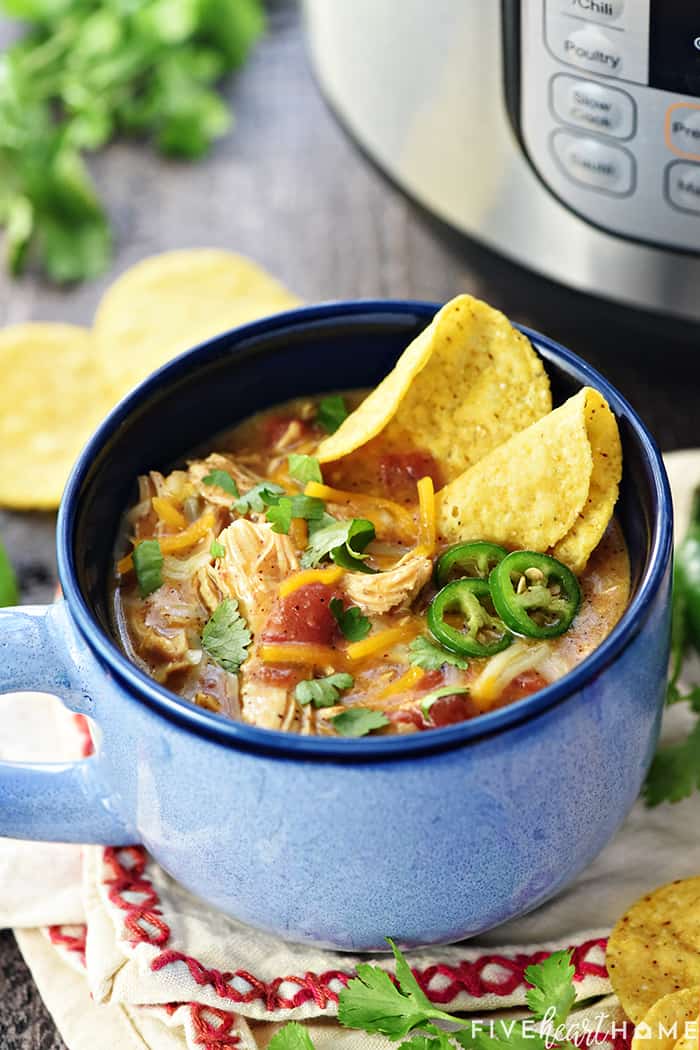 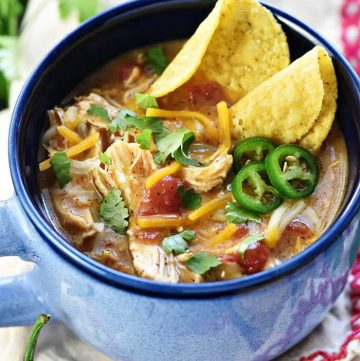 So that was the Instant Pot version of this soup. But what if you want to make this recipe à la my cookbook, in the crock pot? Using the same ingredients, simply follow the below modified directions...

Melt the butter in a medium saucepan over medium-low heat. Add the garlic and saute until it is fragrant and light golden brown, about 1 minute. Stir in the flour and whisk continuously for 1 minute. Slowly whisk in the chicken broth. Increase the heat to a simmer and whisk continuously for several minutes, until the sauce is smooth and thickened. Remove the saucepan from the heat, and stir in the chili powder, cumin, garlic powder and salt. Add black pepper to taste and set the sauce aside.

Place the chicken breasts in a large slow cooker. Top them with the diced tomatoes with green chiles and jalapeño and pour the sauce over the top. Cover the slow cooker and cook on low for 4 to 6 hours, until the chicken is tender and cooked through but not overcooked. 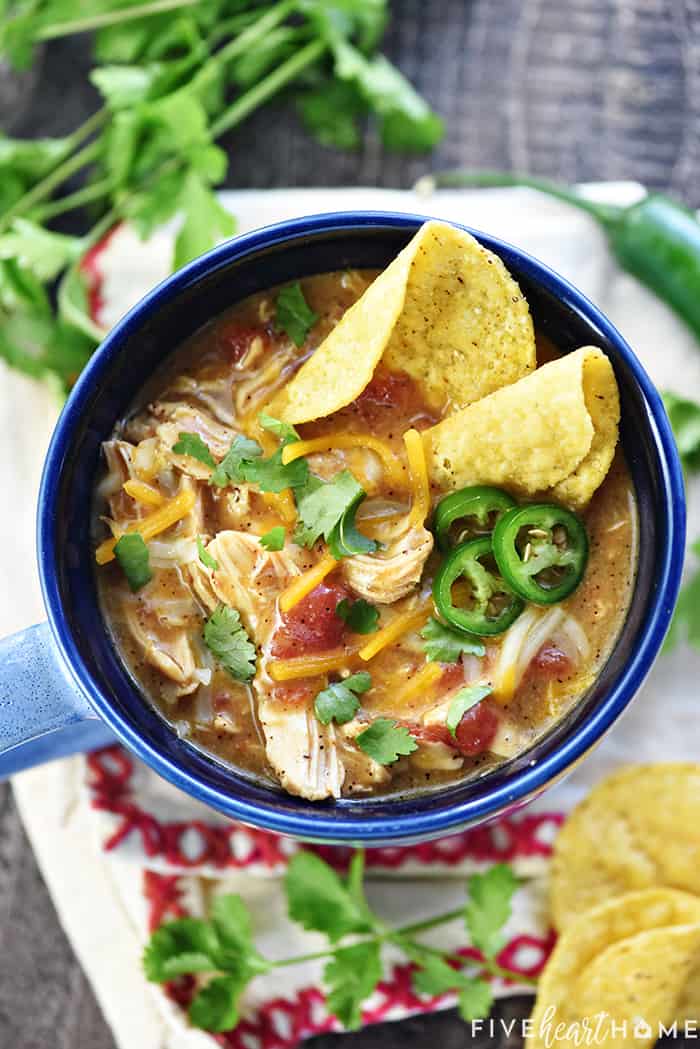 And what if you want to make this soup the old-fashioned way, in a pot on the stove?

For a stovetop version of this soup, you will make the sauce in a pot on the stovetop, just like in the slow cooker version. The main difference here is that you will need to use pre-cooked chicken rather than cooking the chicken in the soup (as is done in the pressure cooker and slow cooker versions.) You can either cook (bake, poach, or whatever's your preference) three large chicken breasts OR use the meat from a whole, shredded rotisserie chicken.

Prepare the sauce as directed in the slow cooker recipe above. However, I recommend sautéing the jalapeño (if using) along with the garlic so that it has a chance to soften. Once the sauce is smooth and thick, stir in the seasonings and the diced tomatoes with green chiles. Cook over low heat for 5 minutes, stirring frequently. Stir in the cheese and 3-4 cups of cooked shredded chicken (as from a rotisserie chicken). Cook for a few more minutes, stirring regularly, until the cheese is melted and the chicken is heated through. 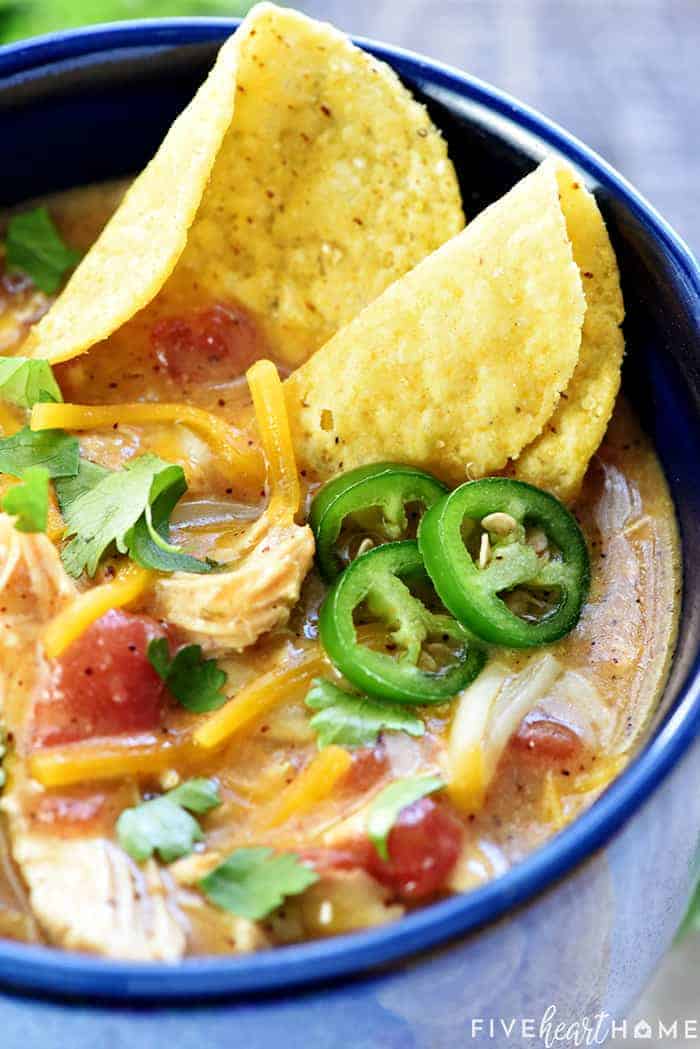 However you decide to whip it up, I hope you ENJOY, FRIENDS!