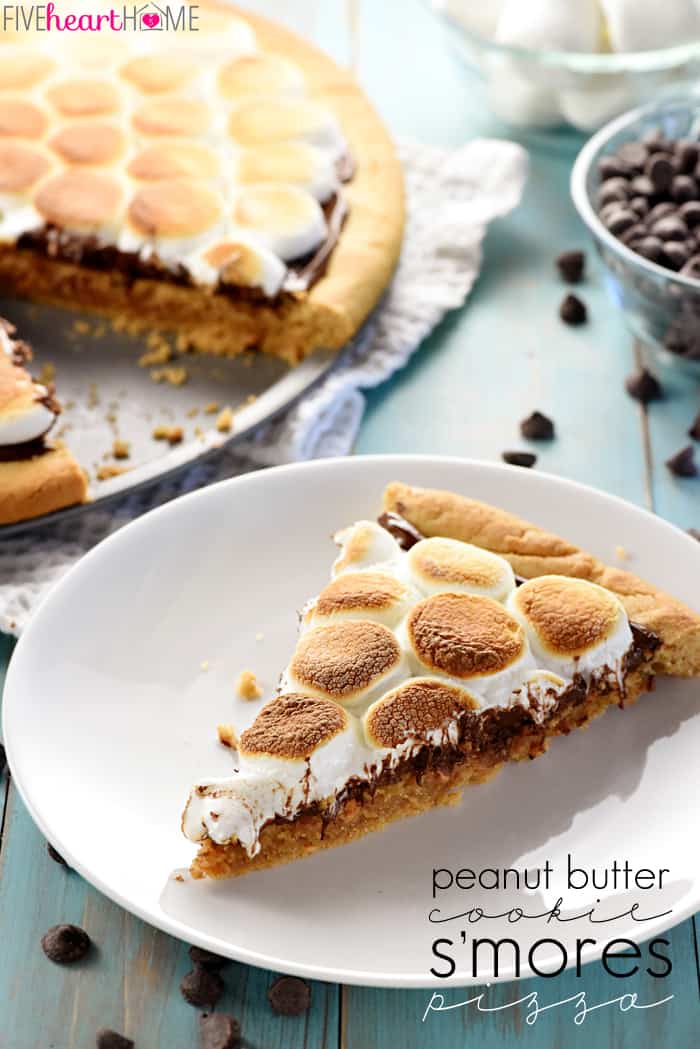 June is zooming by and it's high time I share a s'mores-inspired recipe, because summer was made for melted chocolate and toasted marshmallows, am I right? The last s'mores recipe I posted was actually my crazy-popular Skillet S'mores Dip two years ago, and I'm not sure that any future s'mores recipe will be able to rival its success. But today we're going to give it a go with this Peanut Butter Cookie S'mores Pizza! Because y'all, s'mores are undoubtedly delicious...but s'mores on a homemade peanut butter cookie crust? Insanely good. 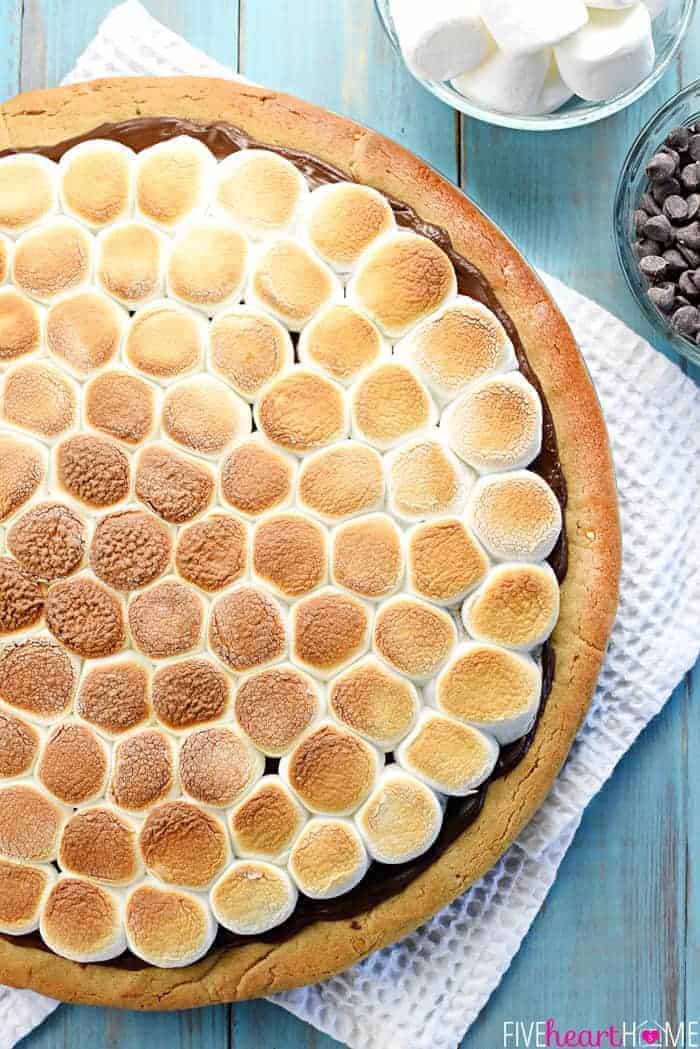 This recipe starts out by whipping up a batch of peanut butter cookie dough, pressing it into a pizza pan, and baking. As soon as the crust comes out of the oven, it's sprinkled with a generous layer of chocolate chips, which are smooth and spreadable after a few minutes. Then it's simply a matter of topping the melted chocolate with marshmallows and quickly toasting 'em under the broiler. The resulting dessert is a summertime showstopper...impressive to behold, fun to eat, and downright decadent. 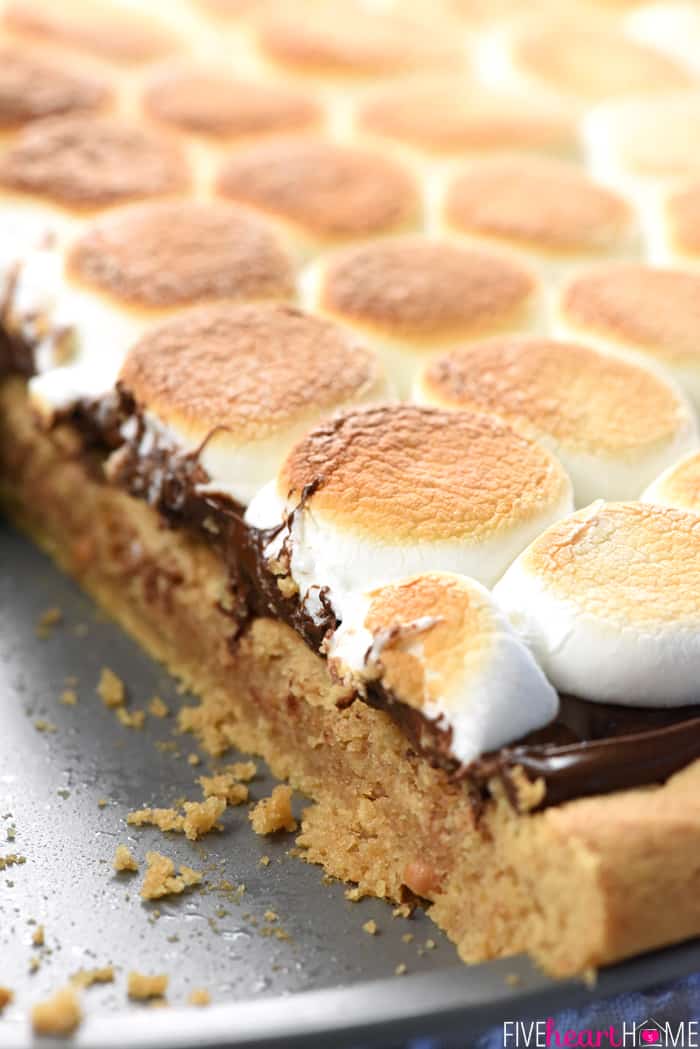 You could pamper your resident peanut butter/chocolate/s'mores lover with a birthday dessert to end all birthday desserts! Or treat Dad to something sweet for Father's Day. Or settle in for pizza and movie night with the family and then surprise them with this beauty to end the evening. Or serve this Peanut Butter Cookie S'mores Pizza at your next barbecue or potluck or swim party. After all, it's sweet and rich so it goes a long way, and, let's be honest...since it can be rather messy with all the melty chocolate and gooey marshmallows, it's perfect for enjoying at an outdoor shindig. 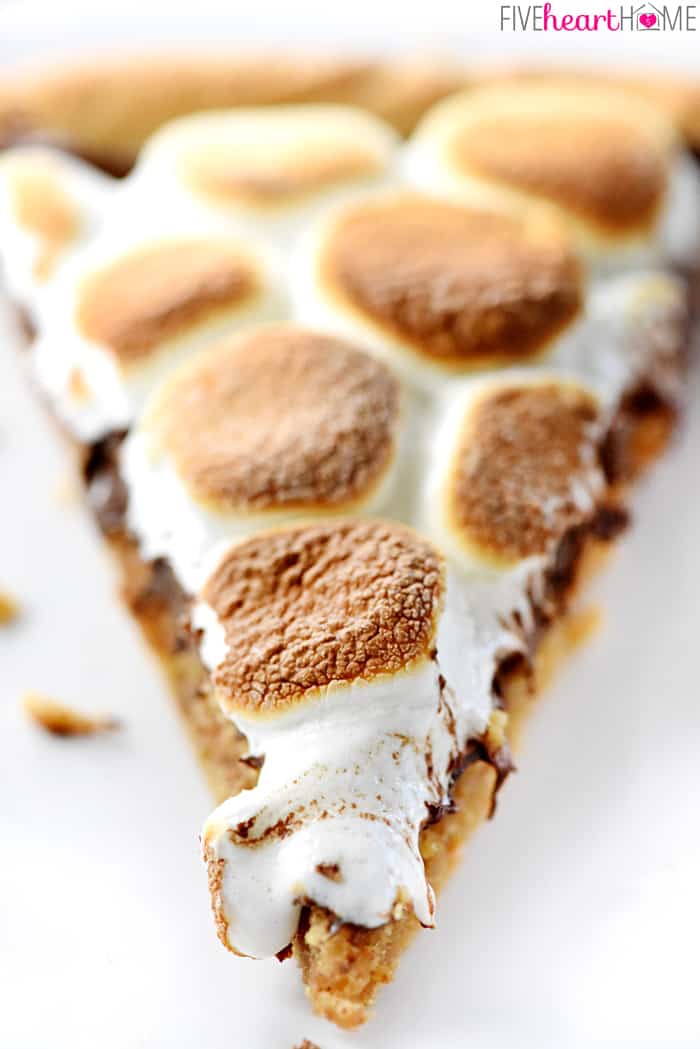 The peanut butter cookie crust is derived from my favorite peanut butter cookie recipe and, quite frankly, it's scrumptious enough to eat on its own without the s'mores adornments. It's thick and soft and slightly chewy, with prominent peanut butter flavor. As you can see in the photos, I used a regular non-stick 14-inch pizza pan, but the cookie crust does rise and expand in the oven, so it was all the way the edge of the pan by the time it finished baking. This made it a bit tricky to grab the pan with pot holders without denting the crust, but I managed. That being said, if you make this recipe on a normal, rimless pizza pan, make sure that you leave a 1-inch border between the edge of the crust and the edge of the pan so that there's room for expansion. However, to avoid the issue altogether, I recommend baking this peanut butter cookie crust in a 14-inch deep dish pizza pan instead...no worries about overflow and easier to grab and maneuver the pan. 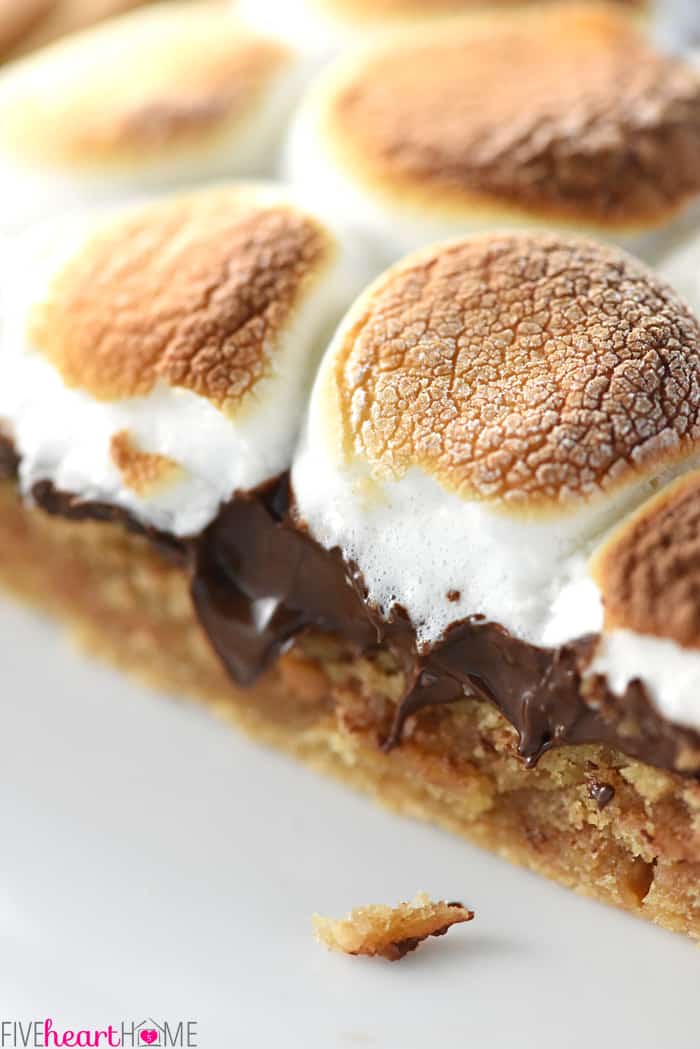 The chocolate layer on this dessert pizza is as easy as spreading the chocolate chips over the hot, fresh-from-the-oven crust and allowing them to sit undisturbed for five or so minutes. Then simply take a knife or off-set spatula and spread the softened chocolate chips into a smooth layer of melted chocolate bliss.

Finally, the crowning glory of this Peanut Butter Cookie S'mores Pizza is the layer of toasted marshmallows. I prefer cutting jumbo marshmallows in half and neatly arranging them, because not only do they toast more evenly, but I happen to think that they look pretty. Alternatively, you could pile a mound of mini marshmallows on top...whatever you have on hand or whatever floats your boat! 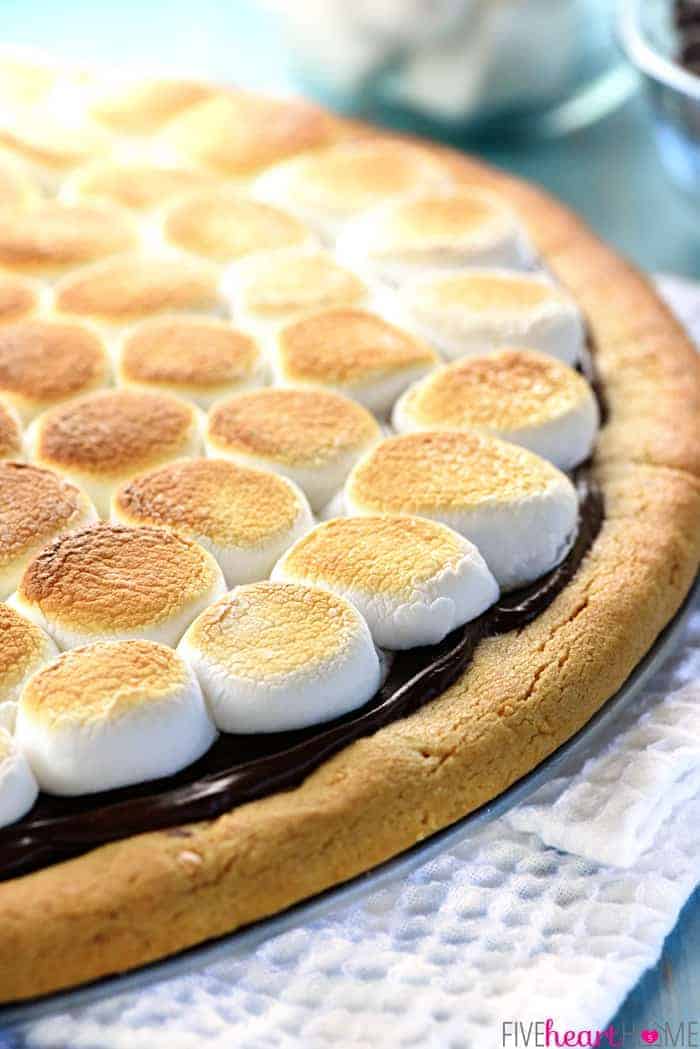 I decided to toast the marshmallows under the broiler since it would be super quick, seeing as how the crust is already baked and doesn't need to be cooked even longer. And quick it was! I'm telling you now, don't walk away from your marshmallows while they're under the broiler. Mine were noticeably toasty after just 30 seconds. But one side of the oven was apparently hotter than the other, so as some of the marshmallows continued getting darker, others were still light. So I carefully pulled out the rack a bit and turned the pan so that the still-pale marshmallows would catch up with their compadres. And then, once everything was to my preferred level of toastiness, I quickly pulled the pan out of the oven. The whole process took slightly over a minute. Had I walked away, I feel certain my 'mallows would have caught fire...and alas, burnt-to-a-crisp is not generally a look I go for in my blog photos.

So have I convinced you to try the most scrumptious, s'mores-worthy dessert of the year??? It may lead to sticky fingers and a messy face, but it's destined to earn a permanent place on your annual summer bucket list. 😉 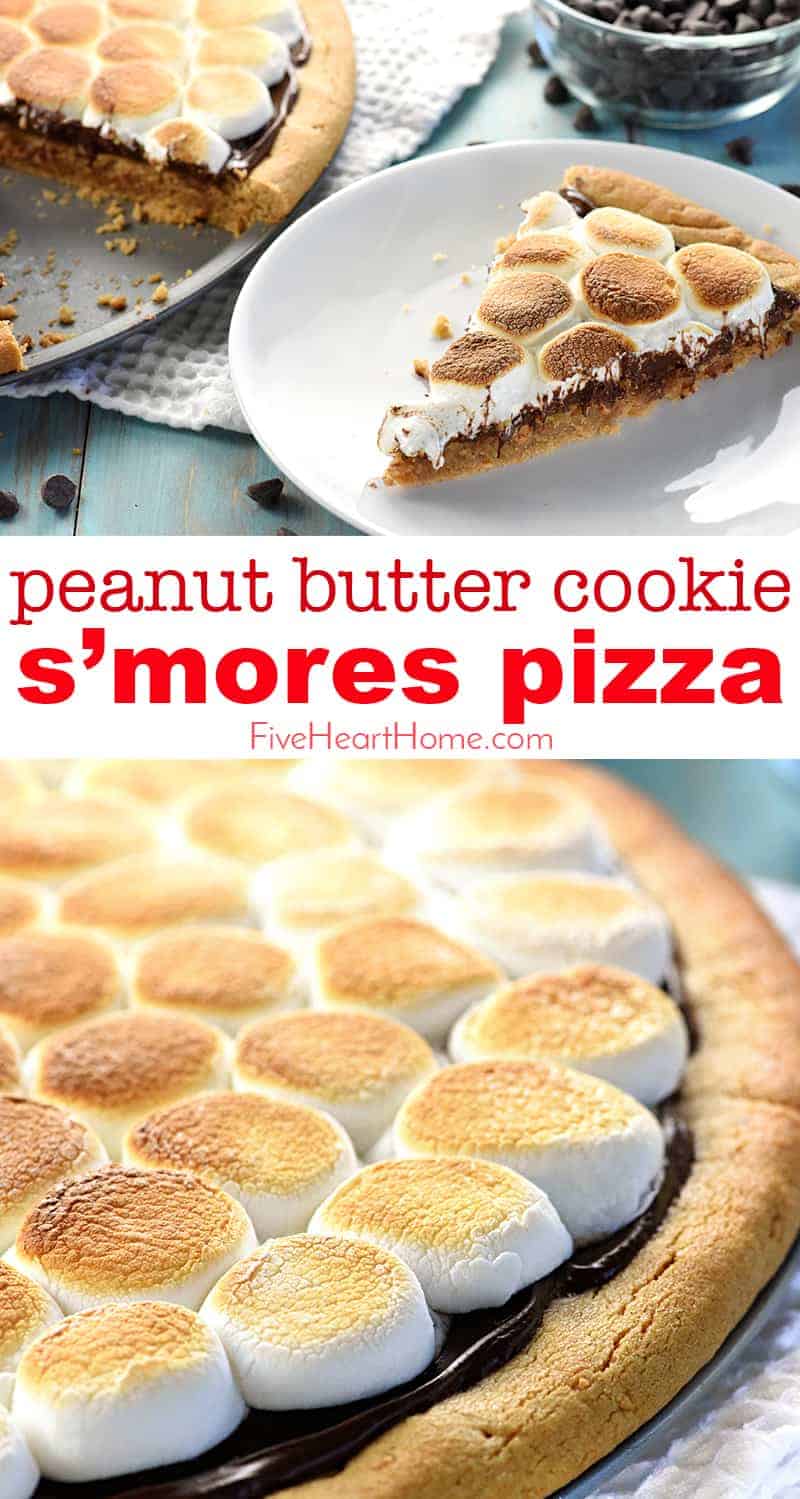 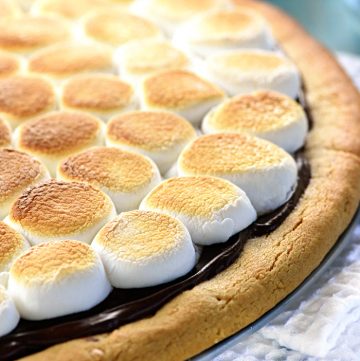