Sometimes a girl gets a craving for chocolate pudding, and I'm not talking about the packaged stuff from the store. Nooo, I'm talking about Homemade Chocolate Pudding: rich, thick, smooth and silky, with no weird ingredients or powdery aftertaste. Pudding that's simple, classic, and positively addictive!

Homemade Chocolate Pudding is magical in its simplicity and deliciousness. It's a challenge not to eat it warm, straight out of the pot. But allowed to chill, it becomes thick and glossy, ready to satisfy any chocoholic or pudding lover's deepest cravings.

Homemade Pudding for the Win

Can I admit a little something if you promise not to judge? I'm a pudding snob.

That's right...I can't stand the instant boxed kind that requires no cooking. The cook-and-serve variety is immeasurably better, but guess what?

With only slightly more effort, you can cook up a pot of 100% Homemade Chocolate Pudding that is above and beyond anything you can find in the inner aisles of the grocery store.

In fact, I have no doubt that I could ingest a whole pot of this stuff in one sitting. But fortunately for my waistline, I have pudding aficionado children who wouldn't allow such a travesty to occur in their presence. Nooo, if I tried to keep it to myself, you'd be able to hear their protests (AKA, whining) from here to Timbuktu. So as long as I don't make this recipe in solitary confinement, I have no choice but to share. Yay and darn.

So enough of my yammering about how amazing this chocolate pudding is. The first important order of business is what you'll need to make it!

Just a handful of simple ingredients...

How to Make Chocolate Pudding

And if you prefer chilling your pudding in one big bowl without messing with individual serving dishes, that works fine, too!

Tip to Prevent Skin on Pudding

Before going any further, I feel obliged to share my favorite Homemade Chocolate Pudding-making trick, in case you're not already privy to it. (And it actually works for any flavor of pudding!)

If you don't like the thick skin that forms on top of cooked pudding as it cools, simply lay a piece of plastic wrap directly on the surface of the pudding while it's still warm. Ensure that the plastic is touching the entire surface with no air bubbles.

The plastic wrap will act as a replacement for the "skin" and, once peeled off, it will reveal completely smooth and silky pudding underneath.

You should definitely use canned whipped cream if you've already got some on hand! But in case you only have plain heavy cream in the fridge, it's super easy to make your own homemade whipped cream:

HINT: Whipped cream beats up the fluffiest when your heavy cream, your whisk, and your bowl are all chilled.

How to Store Chocolate Pudding

Tightly cover any leftover chocolate pudding and refrigerate for up to three or four days.

But to be honest, it's never lasted that long at my house!

And NO...you cannot freeze and then thaw pudding, as the texture will unpleasantly change upon thawing. However, if you'd like to consume your pudding in frozen form -- à la a frozen pudding popsicle -- that will work just dandy.

So are you a fellow pudding fanatic?

There's nothing really groundbreaking about this Homemade Chocolate Pudding, y'all. It's just simple and straightforward to make, and dang good, and a recipe that I feel you should have in your repertoire.

Say it with me now! Easy…homemade…BLISS. 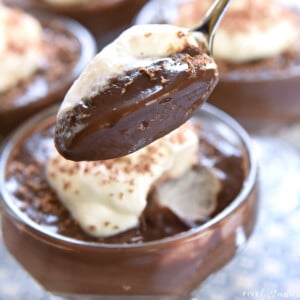