Thanksgiving, it is upon us! Although I have to admit that I occasionally forget it isn't yet behind us, seeing as how stores have been decked with boughs of holly since the day after Halloween, and cedar trees along roadways 'round these parts are already laden with Christmas ornaments (keep Austin weird, y'all). But I'm plugging my ears to the Christmas carols and shutting my eyes to the tinsel for ONE MORE WEEK, because Thanksgiving deserves a fair shake first! And today that means Brussels Sprouts Gratin!

Let's face it...any recipe including the word bacon is going to be good. And who's going to argue with a gratin-like topping of cheese and/or breadcrumbs? In the case of these Brussels, that cheese is Gruyere and those breadcrumbs are panko...yum.

There's also a drizzle of half-and-half for good measure.

You like how I used half-and-half instead of heavy cream? I'm clearly all about saving y'all calories here. 😉 HA.

Brussels Sprouts with Cheese and Bacon

I'm a big fan of roasted Brussels sprouts and make them frequently as a weeknight veggie.

But for a special holiday dinner -- I'm looking at you, Thanksgiving -- why not kick things up a notch?

Brussels Sprouts Gratin does just that, and boy is it scrumptious.

The Brussels Sprouts Gratin recipe is surprisingly straightforward, particularly when you consider the fact that it seems so much fancier and more complicated than simple roasted sprouts. But it's really not difficult at all.

Thanks be to BACON! And Brussels sprouts. And Gruyere and panko and cream -- er, half-and-half.

I'm telling you, it's an amazing combo. And one you need to make for Thanksgiving next week, or Christmas next month, or on some random Tuesday in between when you're hankering for a touch of decadence. 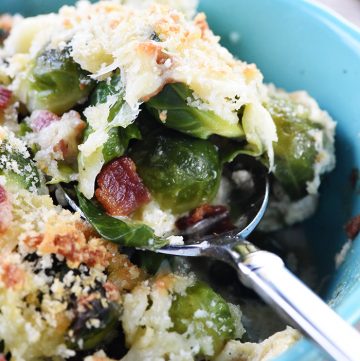