Slow Cooker Granola...who knew it was a thing?! I have to admit that I was more than a bit skeptical the first time I heard you could make granola in a crock pot. After all, I make granola all the time, in a multitude of variations. But I've always just baked it. Isn't that the norm?

So I was definitely intrigued when a friend recently mentioned slow cooking granola...like, in a slow cooker. What??? After a bit of research and some experimentation, however, I can now report that not only does Slow Cooker Granola work, but it turns out delicious, with a texture that's actually very comparable to oven-baked granola. Crazy! 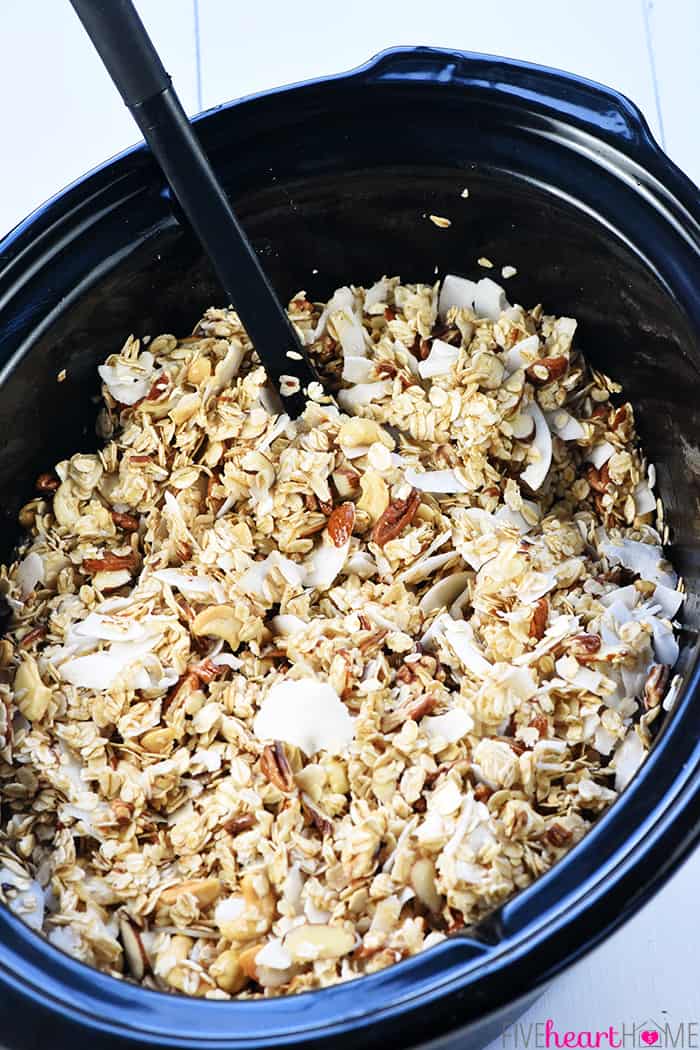 That being said, there are three keys to crunchy granola from the slow cooker:

1. You must crack the lid of the slow cooker while the granola cooks. This allows the steam to escape, alleviating the potential pitfall of soggy granola.

2. You must stir your granola frequently -- most likely, every 20 to 30 minutes -- but exactly how often will depend on how hot your slow cooker runs. And finally...

3. After a couple of hours, your granola will be golden brown, but it won't exactly be crunchy. Therefore, you must transfer the cooked granola from the crock pot to a large rimmed baking sheet to finish cooling. This is where the magic happens...it will go from soft and chewy to crispy and crunchy in no time! 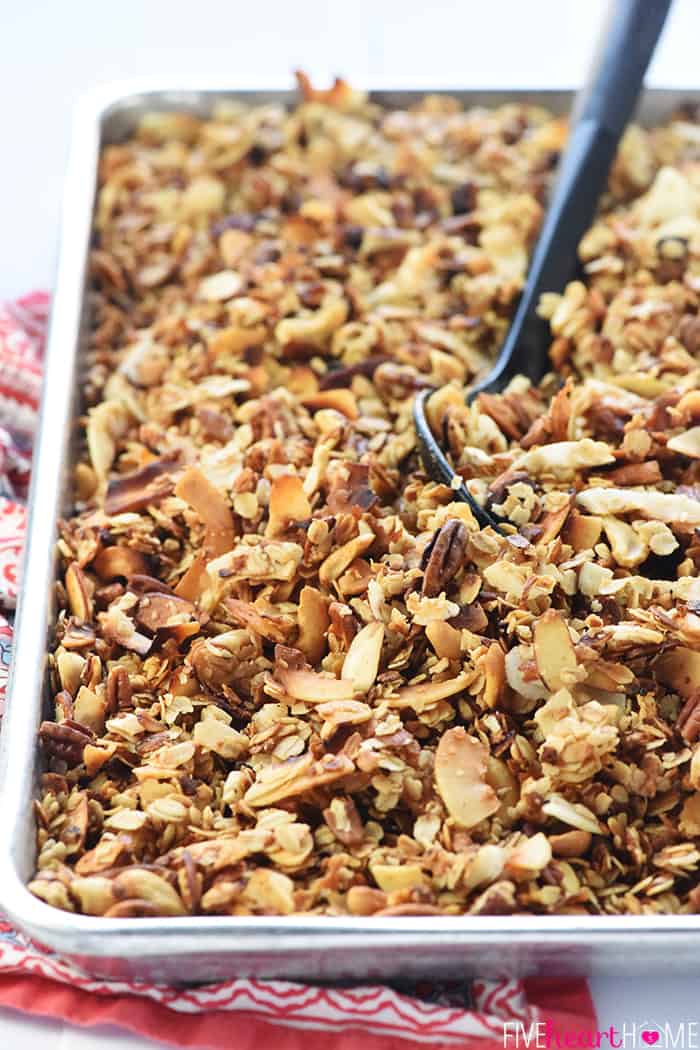 But Why Make Granola in the Crock Pot?

Why would you want to make granola in a slow cooker in the first place? Well, I'm so glad you asked. 😉

First of all, it's easy. You can mix together your ingredients directly in the crock pot insert. There's no big bowl to dirty, and because a slow cooker is so deep, it doesn't make a mess to stir the ingredients around every so many minutes. When you bake granola in the oven on a baking pan, it can be tricky to flip and stir everything without spilling it onto the counter. Not so with the slow cooker! 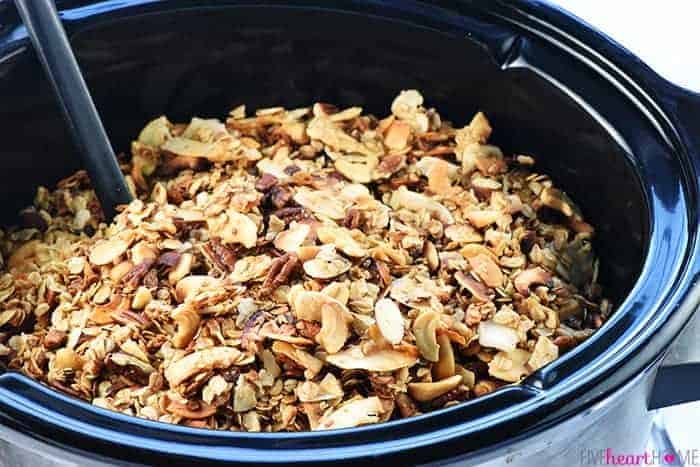 Additionally, if you use a large (6- to 7-quart) slow cooker, you can make a big batch of granola all at once. I've written the proportions below as a standard-sized recipe (yielding about 10 cups of granola). But the truth is, granola never lasts very long at my house. So since a large crock pot has the capacity to hold lots o' goodies, I can easy double (or multiply X 1.5) my standard granola recipe for a giant batch that will last more than a few days with my hungry crew. 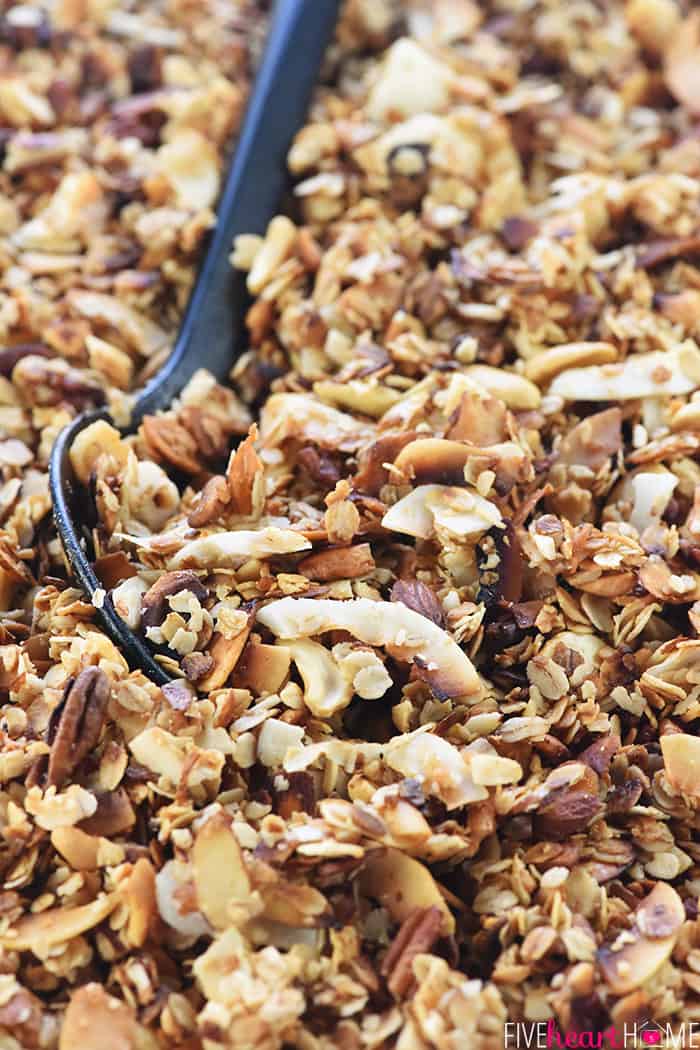 Finally, whipping up granola in the crock pot is ideal when you don't have (or don't want to use) the oven. Maybe your oven is already occupied with other recipes. Maybe it's too hot outside to heat up the whole kitchen by turning on the oven (hellooo, high of 95°F on September 21st...?). Maybe you're cooking in a location that lacks a full kitchen. Whatever the reason, isn't it nice to have the option of a slow cooker for recipes like this that typically require an oven? 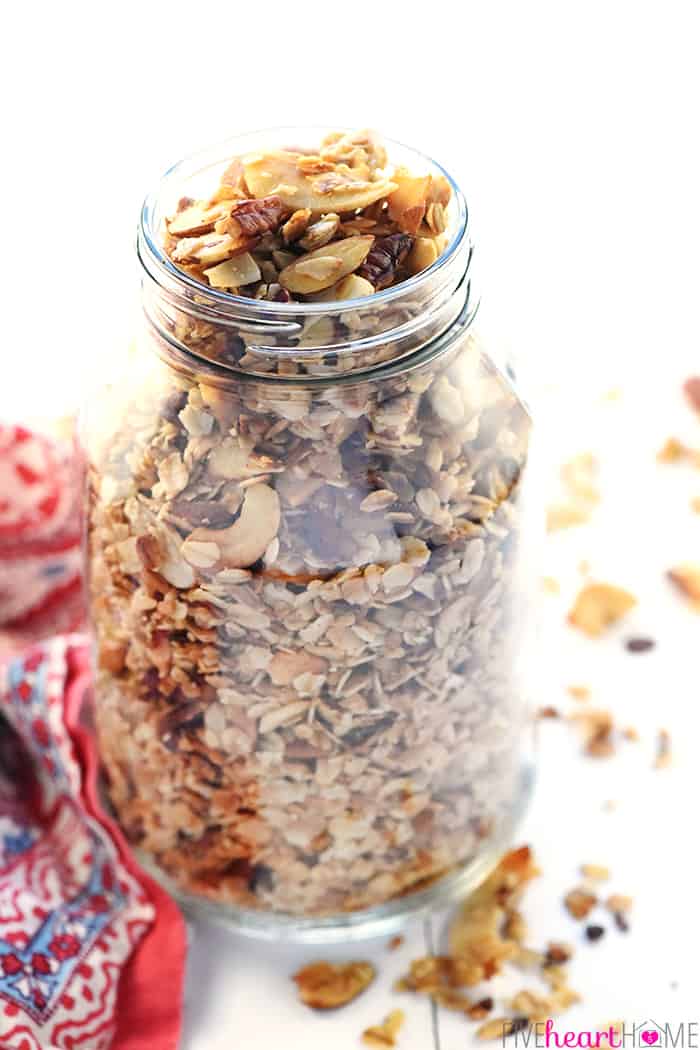 Slow Cooker Granola does require stirring every so many minutes, so it's not a recipe you can walk away from for hours at a time. The heat from the crock pot insert is what turns the oats, nuts, and other goodies golden brown, so if not regularly stirred, they'll be pressed against the hot interior for too long and go from golden to burnt. However, I find this to be a perfect recipe to make when I'm working around the house getting other things done (or, you know, doing nothing at all...aside from making granola). I just set the kitchen timer to remind me when to stir. As a bonus, the whole house smells heavenly! 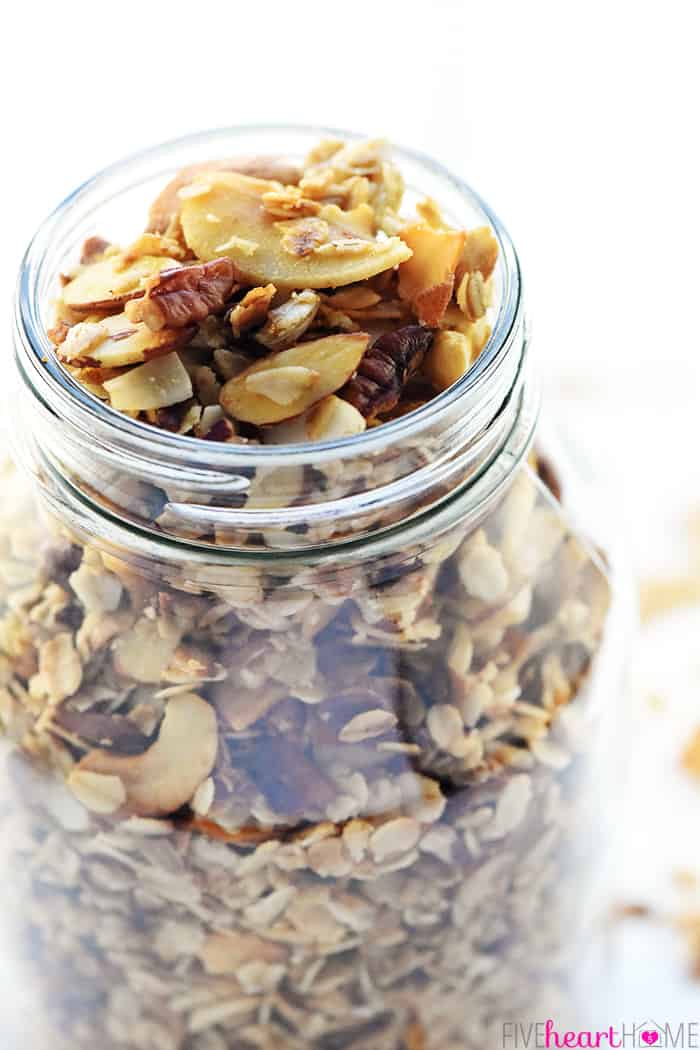 So who's ready to put your crock pot to work making coconut oil-fortified, honey-kissed, nut- and coconut-loaded Slow Cooker Granola? I think you'll be pleasantly surprised by how effortless it is and how tasty it turns out! 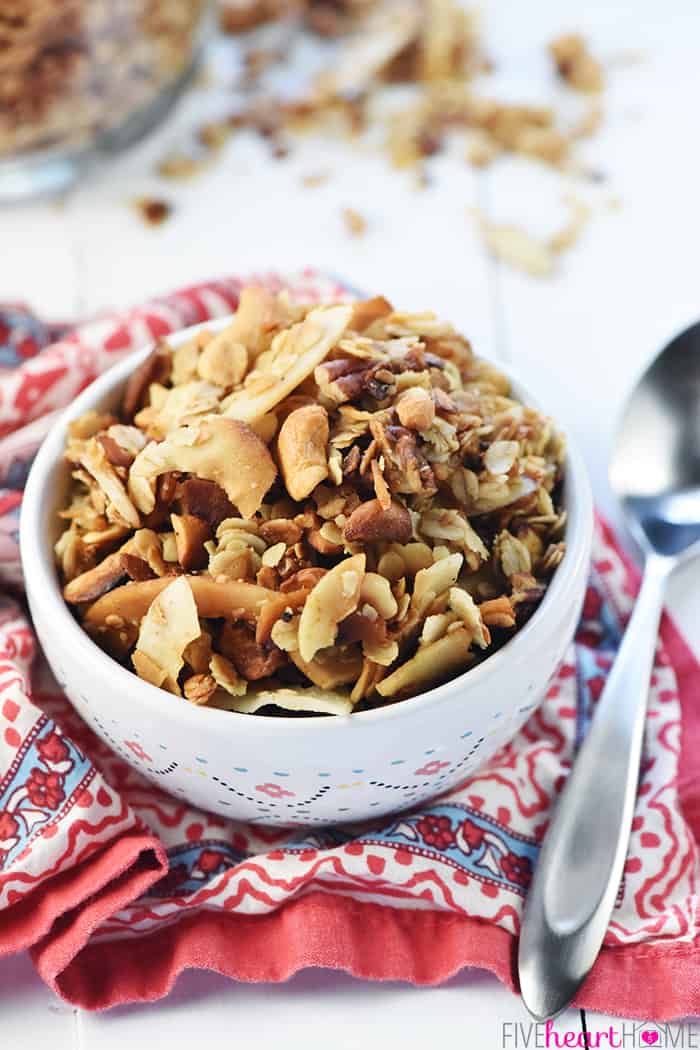 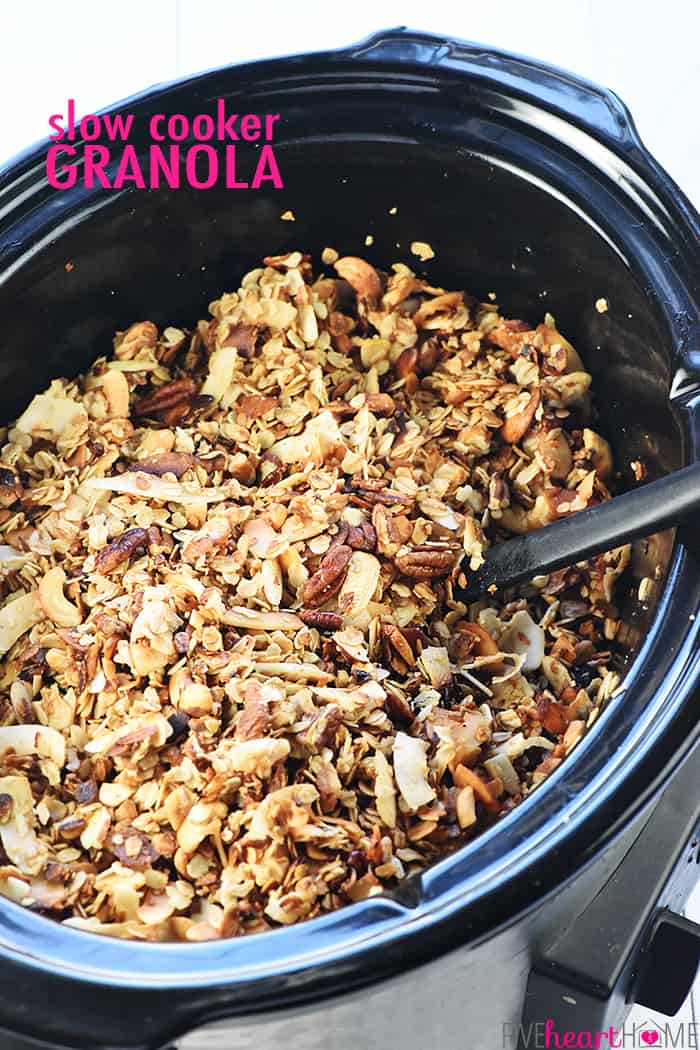 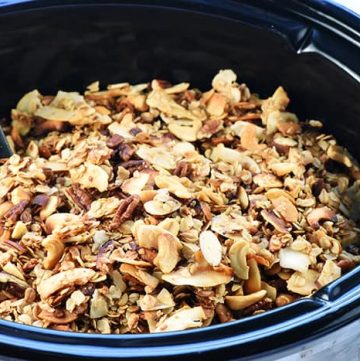