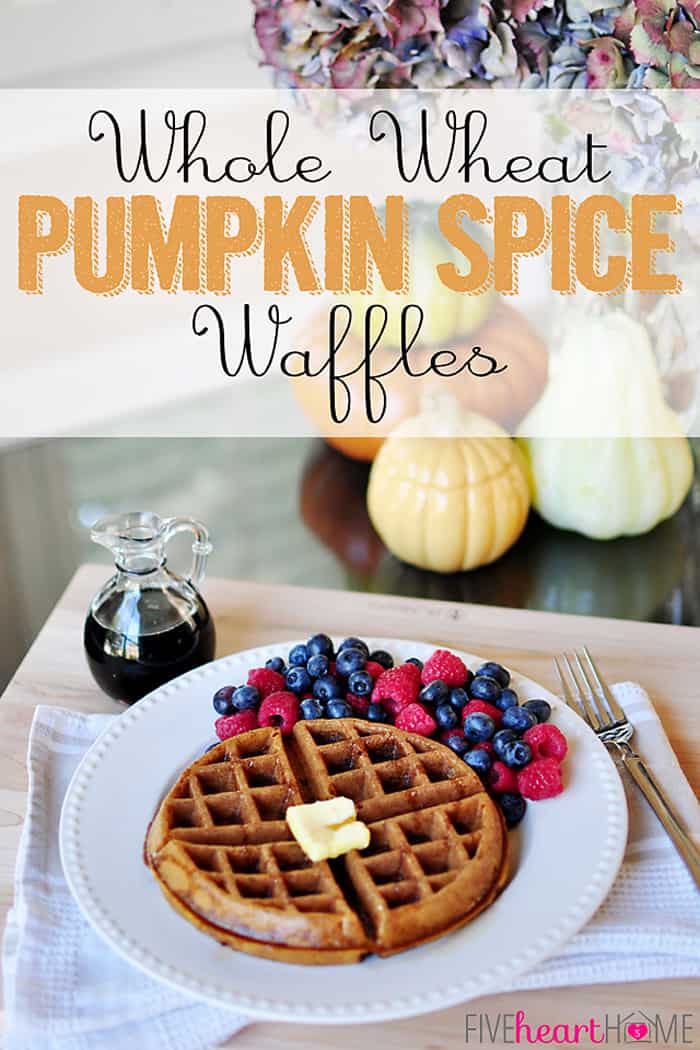 These Whole Wheat Pumpkin Spice Waffles are loaded with cinnamon, ginger, and nutmeg, boasting crispy exteriors with light and airy interiors. You would never guess that they're 100% whole wheat, and as an added bonus, they can easily be made dairy-free!

Am I the only one who can't believe it's already September?! But rather than mourn the end of summer, I'm going to focus on the facets of fall that make me oh-so-happy...football, cooler weather (ha! maybe in another two months here in Texas), and baking with pumpkin! I seriously love me some pumpkin-packed baked goods, y'all. As soon as autumn hits, I stock up on cans of pumpkin and get to baking. Pumpkin bread? Duh. Pumpkin pie? Of course. Pumpkin cookies? Why not? Pumpkin cupcakes? Yum. But last year marked the fall I discovered pumpkin waffles. And I made up for lost time by making them pretty much once a week. 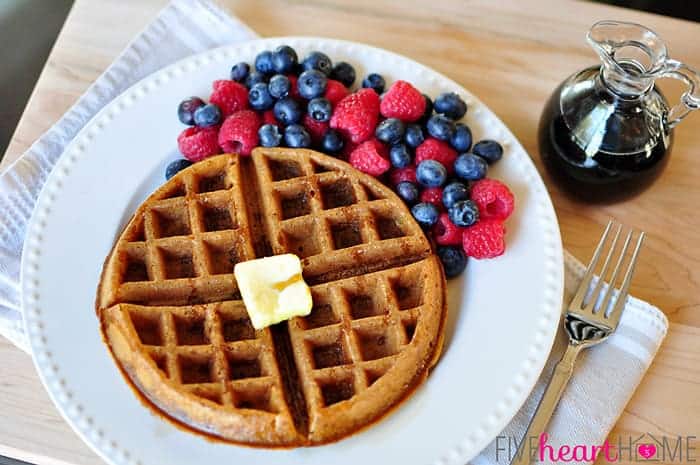 The thing about these waffles (aside from their pumpkin-y goodness, of course) is that I had to figure out how to make them dairy-free. Because around the same time that I discovered pumpkin waffles, I also learned that my sweet new baby girl had a milk protein intolerance, and that meant no dairy for mama. Zip, zero, zilch. So long milk, cheese, ice cream...it was a difficult adjustment to say the least. But despite the fact that I had to completely eliminate a variety of foods from my diet, I was determined to make substitutions to recipes when possible so that I could still enjoy some semblance of normal eating with my family. 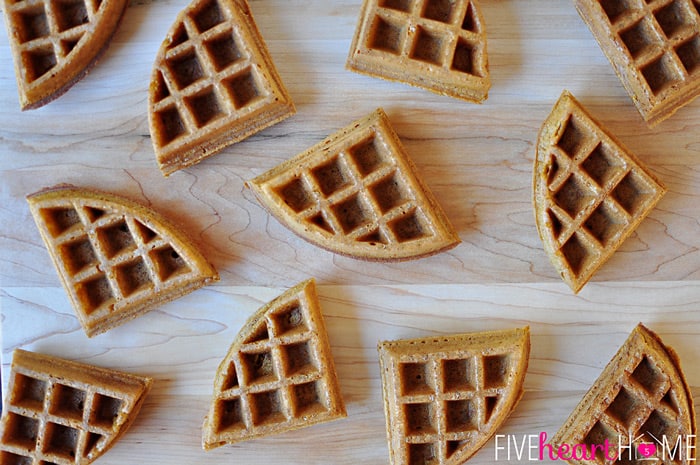 I figured that a recipe for pumpkin waffles originally calling for milk should work with coconut milk, right? And instead of butter, I continued the theme by subbing coconut oil. Typically I would have worried that all of those coconut derivatives would have given my waffles a coconut undertone, but I hoped that the pumpkin and spices used in these waffles would be enough to mask any coconut flavor. And they were! You would never guess that these waffles are made with coconut milk (I use the refrigerated kind that comes in a carton) and coconut oil, because all you can taste is pumpkin, cinnamon, ginger, and nutmeg. For that reason, I think that you could use any type of non-dairy milk in this recipe -- soy, almond, or rice milk -- and have successful results. And of course, you could certainly make these waffles with regular milk and butter if dairy isn't an issue for you. (P.S. The pat of "butter" in these photos is actually a non-dairy butter substitute, but by all means go for the real deal if dairy is your friend!) 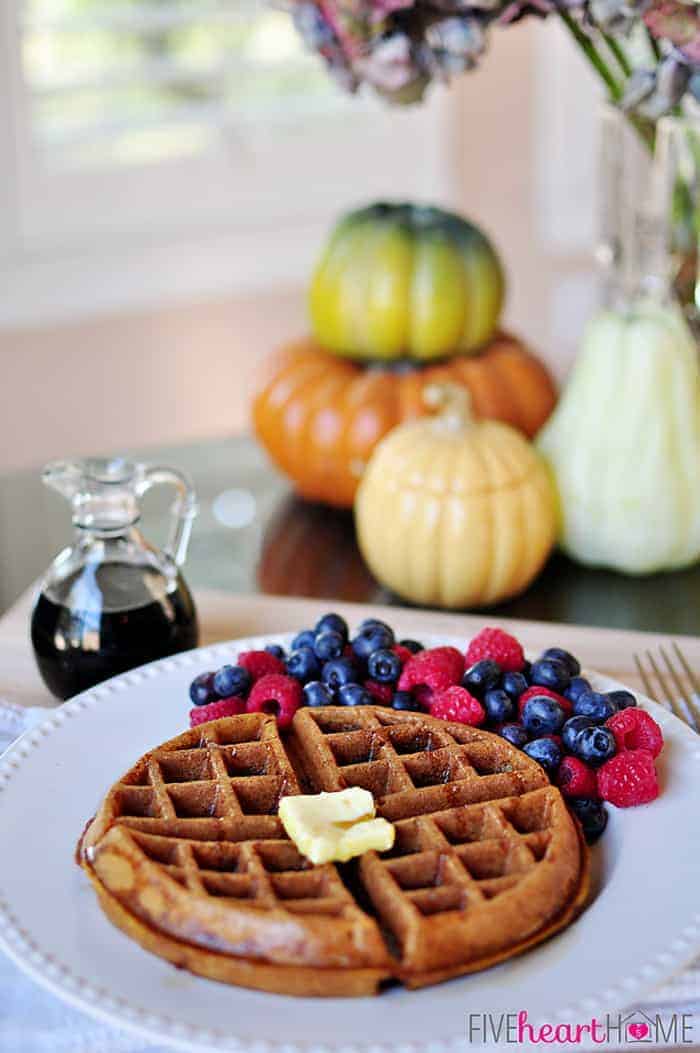 One last note is that this recipe, as written, makes a ton of waffles. See that big round waffle on the plate below? Well, multiply that by about 10. But I don't mind having excess pumpkin waffles on hand. We eat quite a few on the morning that I make them, and then I like to keep leftovers in the refrigerator or freezer for quick breakfasts all week long. I also like making a full recipe because it uses up the whole can of pumpkin in one fell swoop. But if you prefer making fewer waffles at once, feel free to cut the recipe in half and reserve the remaining half can of pumpkin for another use. 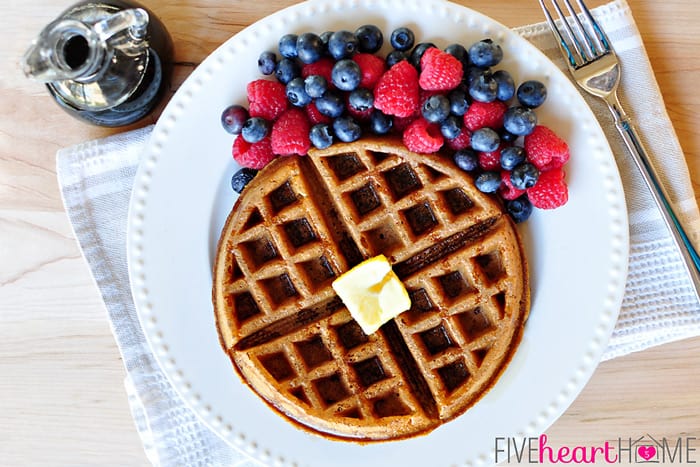 So how do you feel about the fact that September is already upon us? Is it already blessedly cool where you live? Are you excited or indifferent about the beginning of football season? And, most importantly, are you a lover of baking with pumpkin, like me? If you answered yes to that last one, these waffles are a must-try.

Heck, even if you didn't answer yes, you need to try these waffles. My husband, a self-proclaimed non-pumpkin lover, told me this weekend as he ate a plate of these waffles, "You know, I don't really like pumpkin. But these are really good." So it sounds like I'll have to share my pumpkin waffles with him this fall, but maybe I'll be lucky enough to hoard the pumpkin bread all to myself. Or maybe not...if only it wasn't for those darn kids. 😉 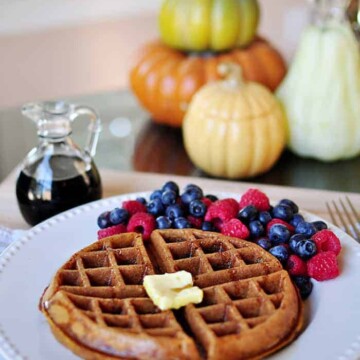