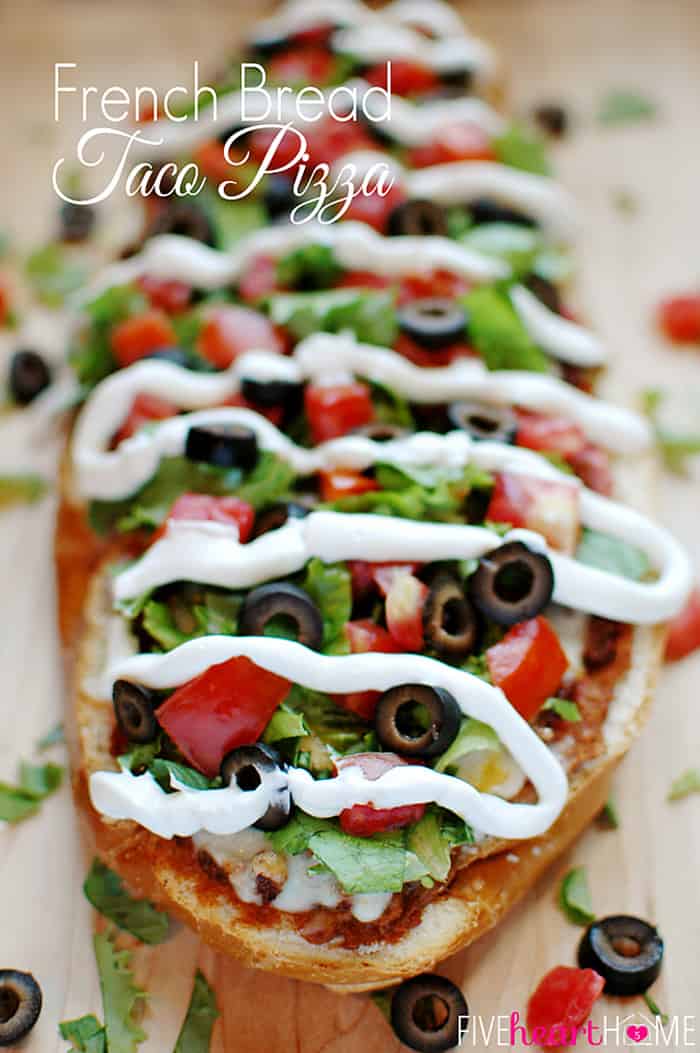 Raise your hand if you have taco night at your house? How 'bout pizza night? Well, today I've got a quick and easy dinner idea that combines the best of both worlds! 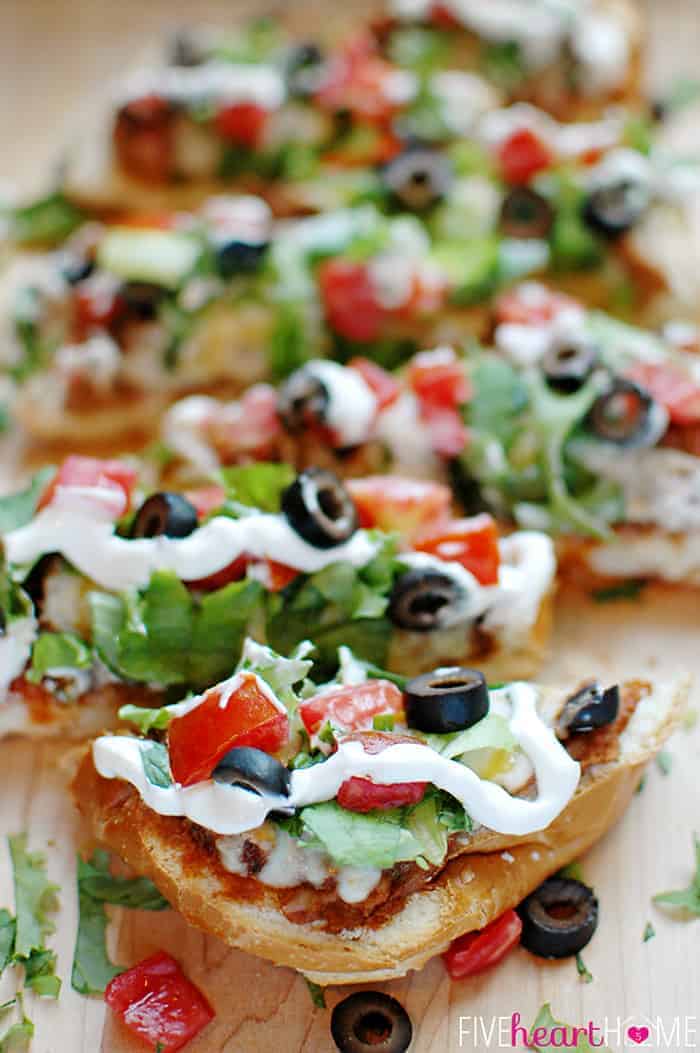 I'm not too proud to admit that I'd never had taco pizza until a couple of months ago. My family took a beach vacation to Florida this past summer, and on the first night of our trip, we put off a seafood feast in favor of a local, family-friendly pizza place right across the street from our condo. After a long two days in the car, we wanted an easy dinner that everyone would eat, so pizza it was. But little did we know that this joint had an amazing menu of pizza options! We ordered several pies to share amongst our large table and we got down to eating. 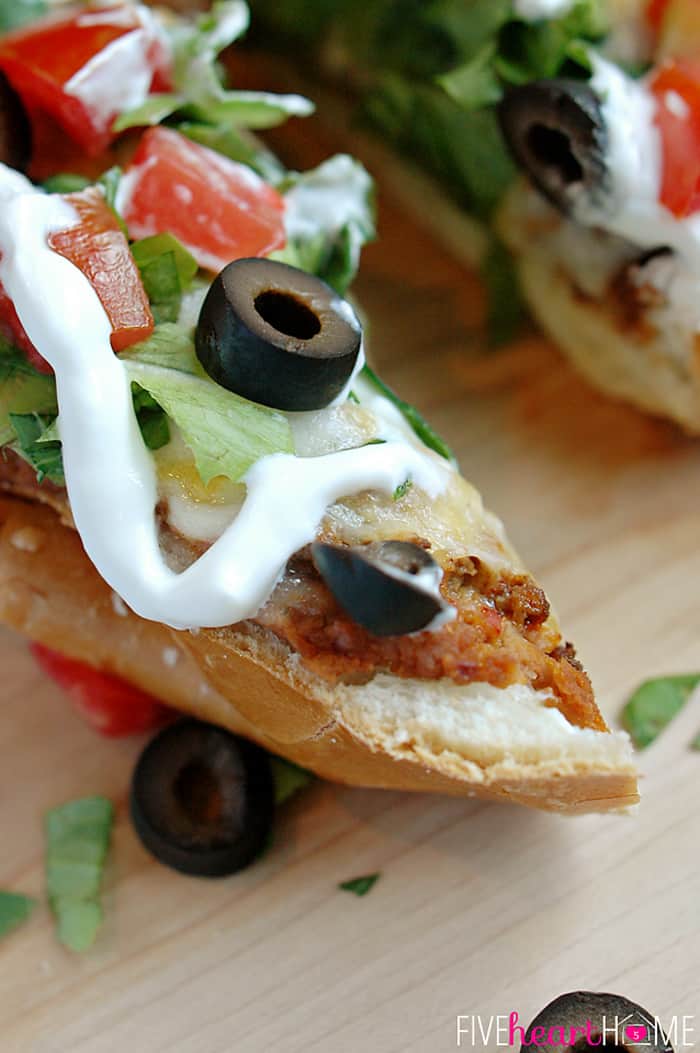 Much to my surprise, one of my favorite pizzas of the night was a deep dish taco pizza, featuring warm taco meat and melted cheese with a cool topping of lettuce and tomatoes. It was the flavors of a taco on a soft, doughy crust, contrasting rich meat and cheese with a fresh, pseudo-salad on top. In one word? Scrumptious! I knew I'd have to recreate it when I got home. 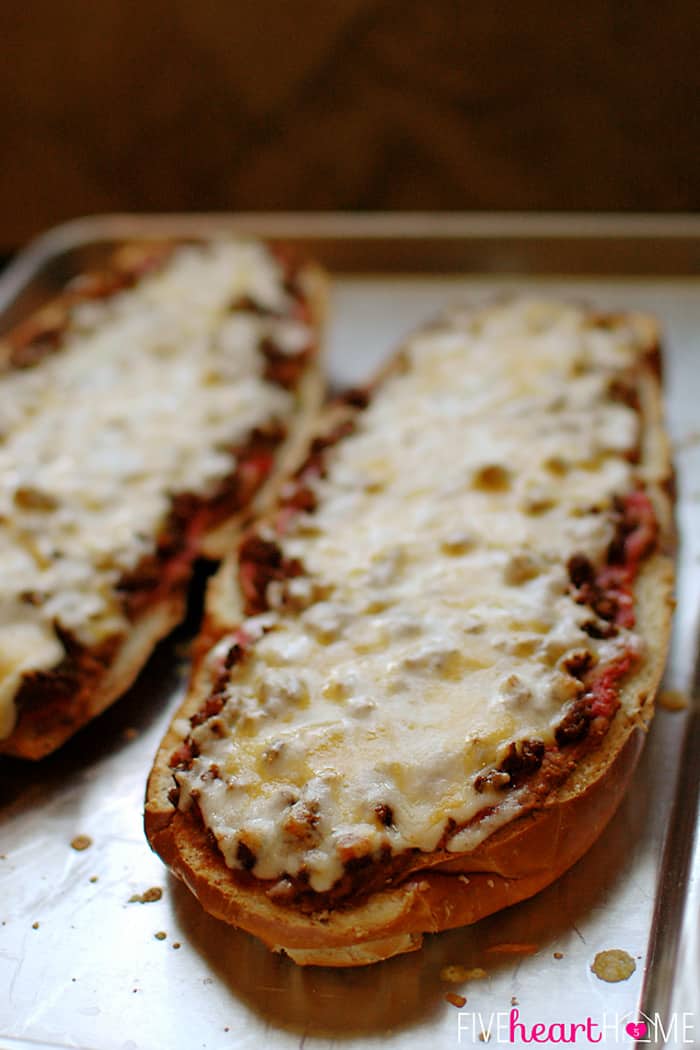 It had been awhile since I made a French bread pizza, and I'd almost forgotten how much I enjoy using a loaf of bread in lieu of a traditional pizza crust. I've said it before, but I could pretty much subsist on bread alone, so this kind of crust is right up my alley...not to mention the fact that it requires zero effort! 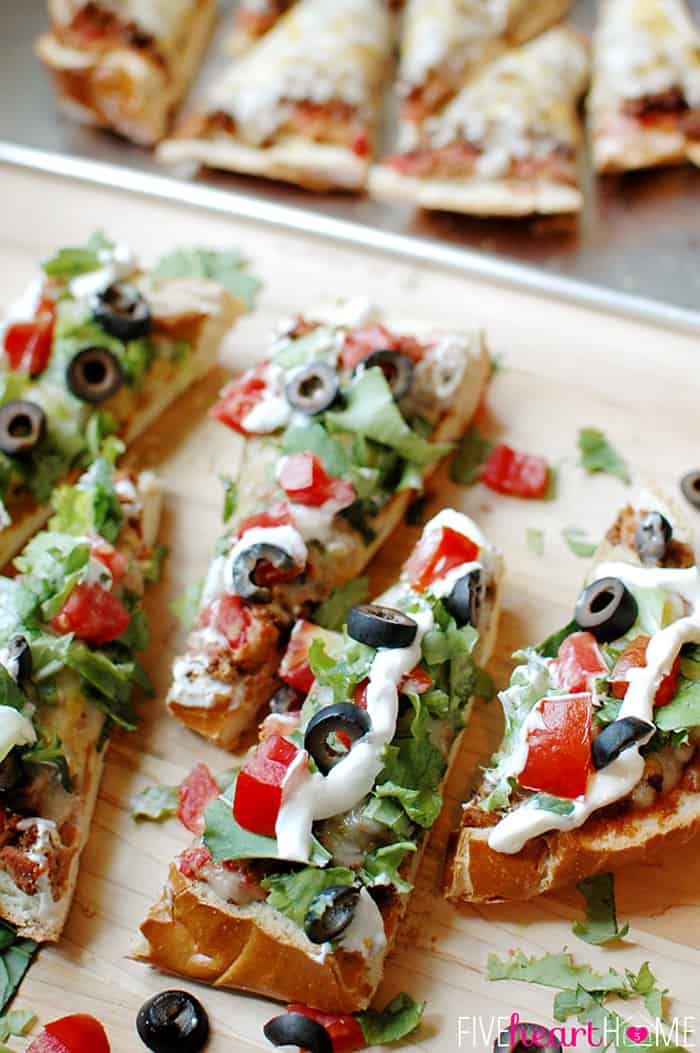 Now I don't remember that taco pizza in Florida as featuring refried beans, but I just so happened to have some leftover Ultimate Bean Dip in the fridge, so I decided that it would only make sense to use that as my first layer (in lieu of traditional pizza sauce).

And where there are beans, there must be salsa, so that comprised layer #2.

The next layer was obvious enough…taco-seasoned ground beef!

And what would a pizza be without cheese? I chose Monterrey Jack with a bit of cheddar mixed in for good measure, but Colby Jack, straight cheddar, Pepper Jack, or even mozzarella would all be ooey-gooey delicious. 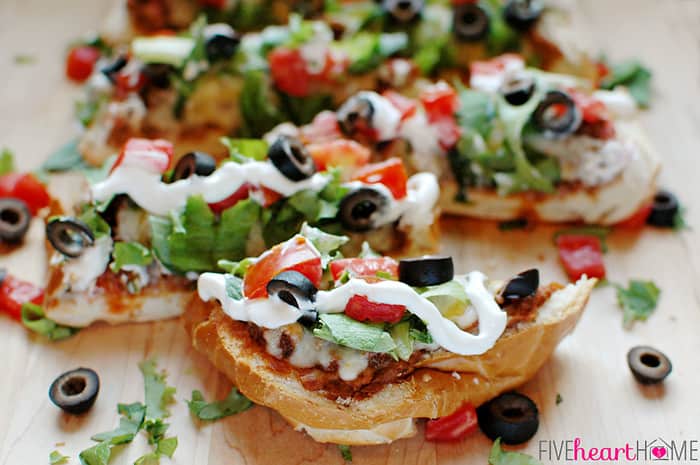 Finally, once the piping-hot pizzas came out of the oven, I drizzled it with sour cream and sprinkled with chopped lettuce, tomatoes, and sliced black olives.

But you know what? If you don't (or your persnickety 4-year-old doesn't) care for all of those veggie-like toppings? Leave them off! This pizza is pretty darn tasty as a meat-&-cheese-lovers version as well. 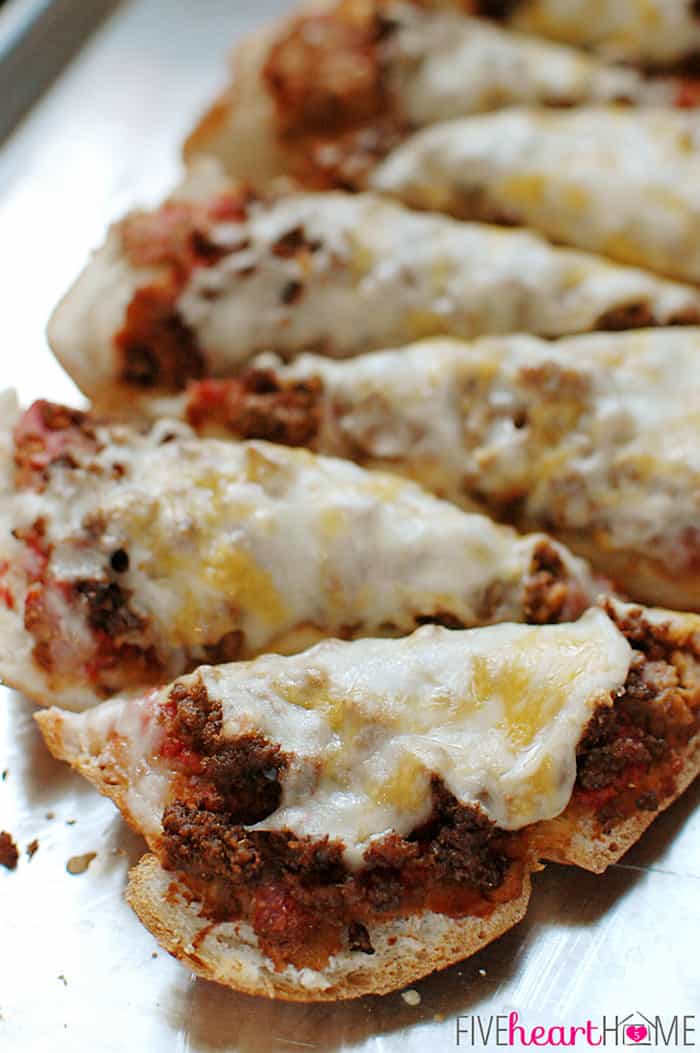 So the next time you have a hankering for something a little more exciting than pepperoni, promise me you'll give this French Bread Taco Pizza a try! (At the very least, if you ever want to whip up a pizza with minimal fuss, buy a loaf of French bread to use as your base.) 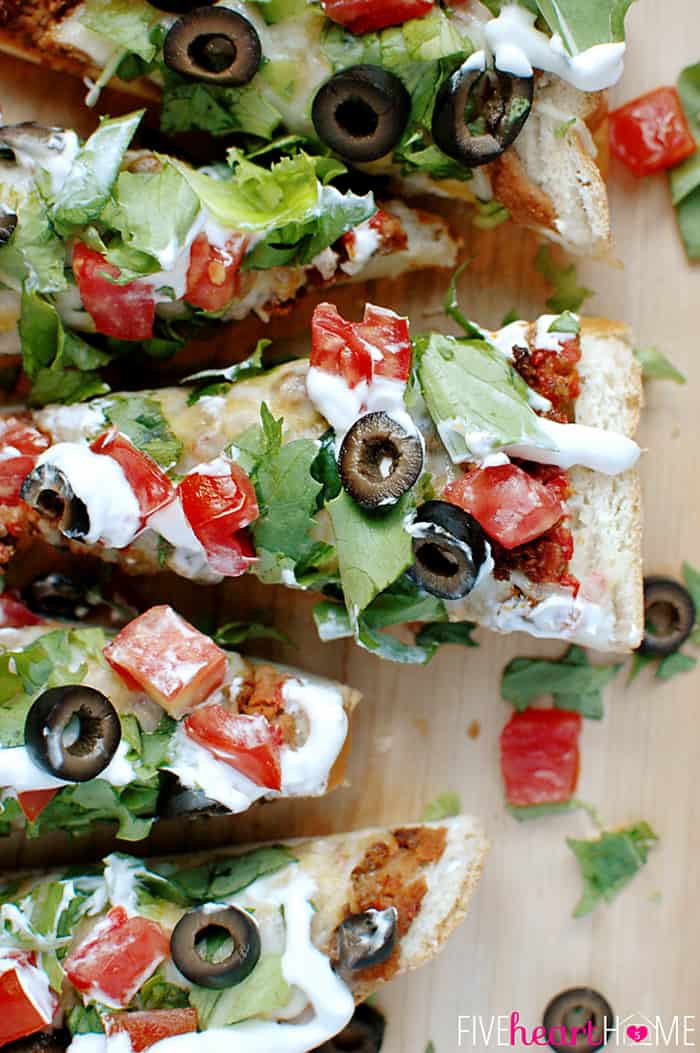 My kids equally adore both tacos and pizza, so this recipe was a win-win for them. My husband raved about it. And me? Well, let's just say I ate all of the leftovers for lunch the next day...before anyone else could claim them. 😉 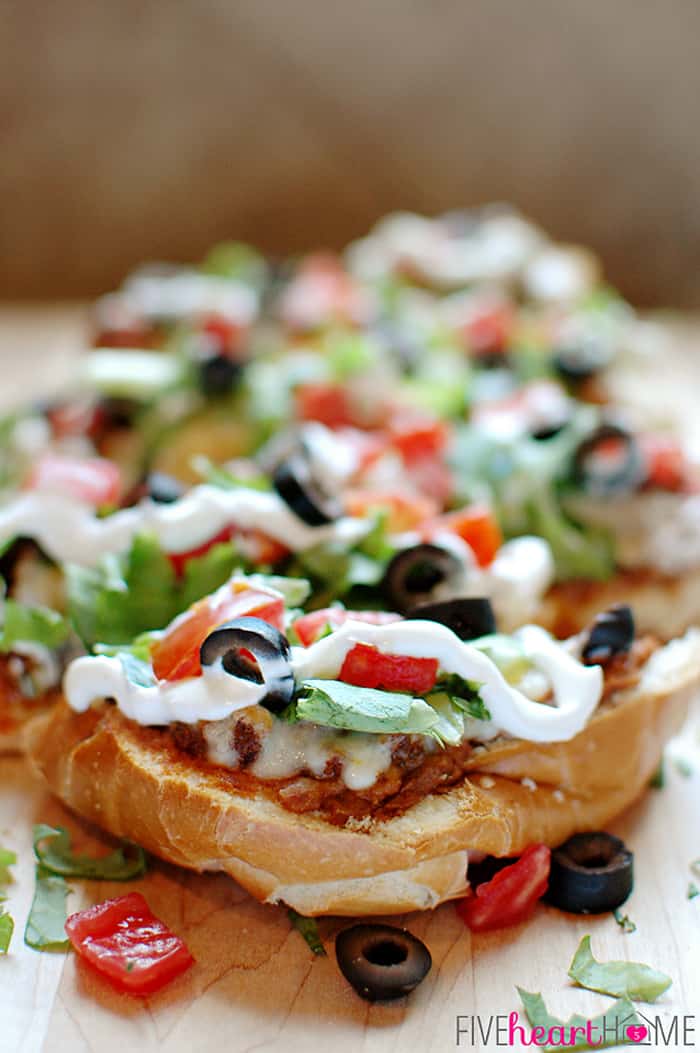 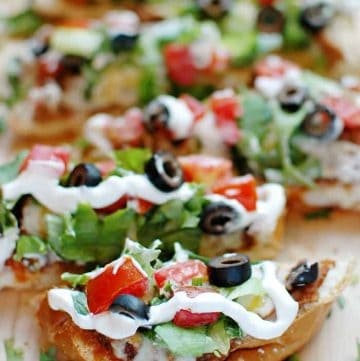 To drizzle sour cream, I stir until smooth and then scoop it into a sandwich-size plastic baggie. I then squeeze all of the sour cream into a corner of the baggie, twist the top of the baggie, snip off a tiny piece of the corner, and use it like a piping bag to drizzle my sour cream. Or skip the extra effort and use a spoon to dollop it on. 🙂
Calories: 722kcal | Carbohydrates: 61g | Protein: 51g | Fat: 30g | Saturated Fat: 17g | Cholesterol: 136mg | Sodium: 1244mg | Potassium: 699mg | Fiber: 3g | Sugar: 5g | Vitamin A: 885IU | Vitamin C: 1.4mg | Calcium: 517mg | Iron: 7mg
Made this recipe? I'd love to see on IG!Mention @FiveHeartHome or tag #FiveHeartHome!
Pin
Share
« Back-to-School Teacher Survival Kit Mason Jar Gift ~ Free Printables!
Mexican Cornbread Casserole »