Soft, tender, homemade Flour Tortillas are not only deliciously versatile, but the recipe is surprisingly easy to make with just FIVE simple ingredients! 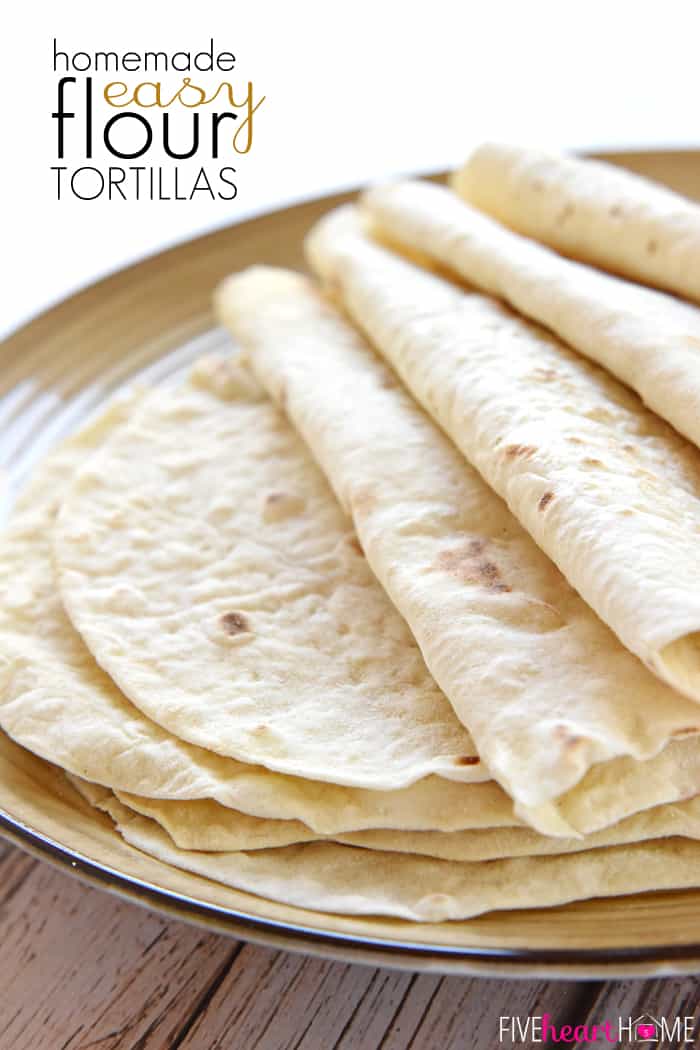 Have you ever made your own homemade tortillas before? It might sound intimidating, but they're actually super simple to make with just five basic ingredients.

Corn tortillas may be the "original," but I have to admit that I've always had a soft spot in my heart for Flour Tortillas. 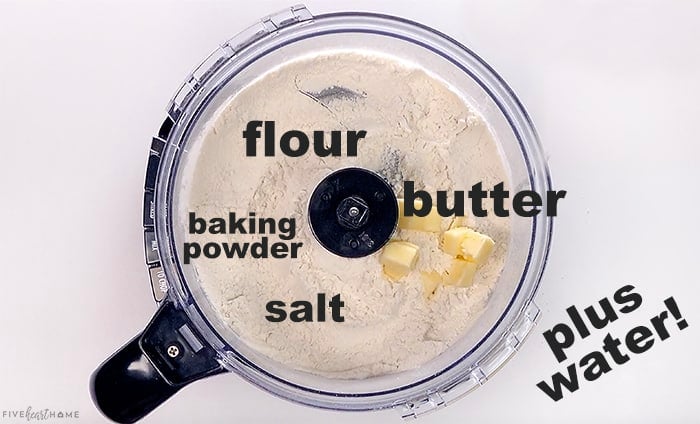 While traditional Flour Tortillas are made with lard, I realize that most of you probably don’t keep that ingredient on hand or perhaps prefer not to use it.

It always amazes me that such simple ingredients can yield such yummy results! 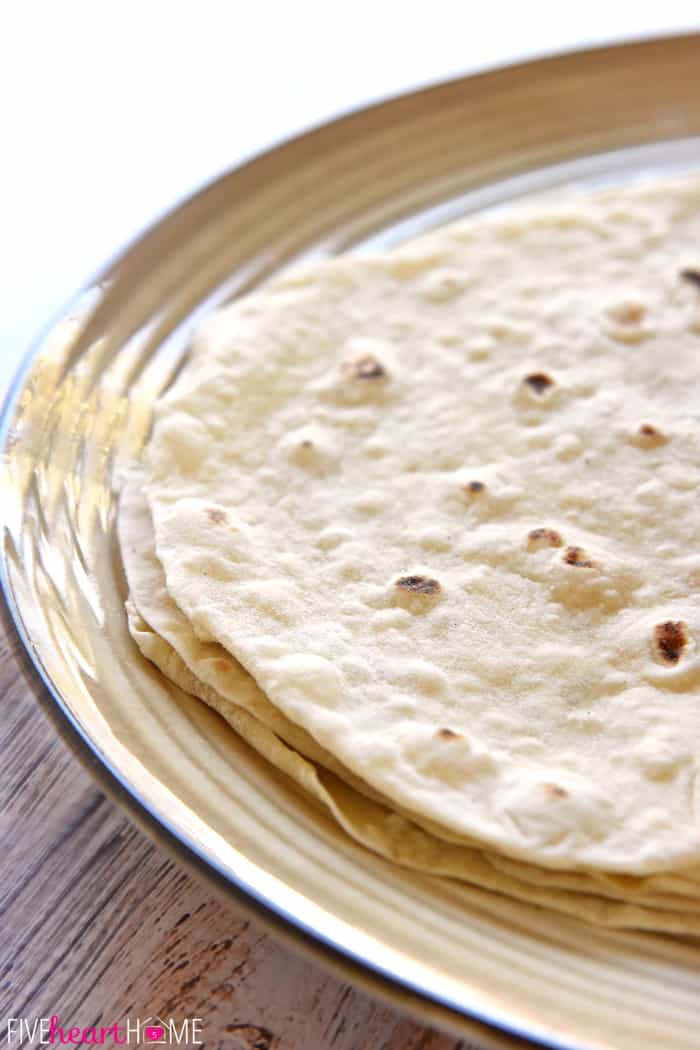 How to Make Homemade Tortillas

Making homemade tortillas may sound intimidating, but if you take it one step at a time, I promise it's totally doable! Take a peek:

Should you prefer a visual, there's a handy-dandy video accompanying this post to walk you through the steps. 🙂

As I do with many of my favorite recipes -- from pie crust to shortbread to scones -- I rely on my trusty food processor to effortlessly whip up these homemade Flour Tortillas.

However, don't let that stop you from making them if you don't have a food processor! You can certainly put them together by hand. It's just a matter of blending the ingredients and then kneading the dough.

Then comes the trickiest part (at least for me)...rolling. The rolling in itself is not challenging, mind you. The aspect I have a hard time with is rolling my homemade tortillas into actual, round-ish circles.

However, I will say that this endeavor gets easier with practice. I will also share that if your Flour Tortilla ends up with a random, Florida-shaped appendage, you have my permission to trim it off with a knife (and nobody will ever be the wiser!). But if you choose to leave it, I can assure you that nobody has ever turned down a soft, warm, fresh-from-the-skillet flour tortilla due to the fact that it wasn't perfectly symmetrical. 😉 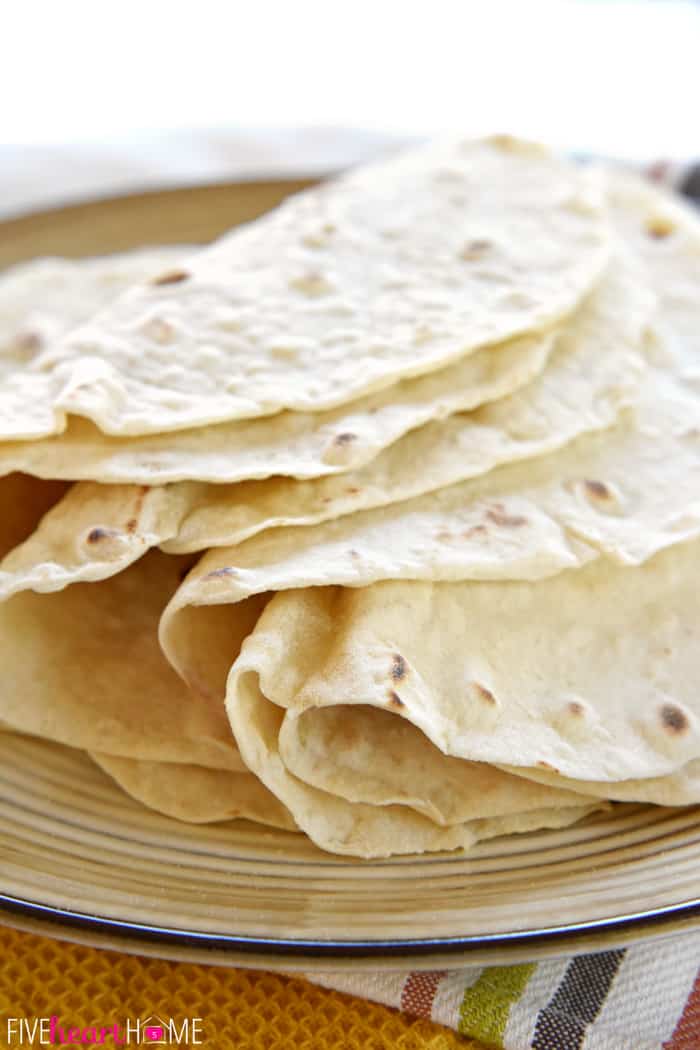 Basically, this flour tortilla recipe is pretty darn easy to make. But the first time you attempt it, you will probably need to experiment just a bit to figure out the right temperature and cooking time based on your stove.

I typically cook my homemade tortillas on a big stainless steel griddle. However, you can use a cast iron skillet or even a nonstick pan if you prefer. And when I make tortillas, I typically double this recipe, because it takes only slightly longer to whip up twice as many tortillas once the food processor is already dirtied up.

If you'd like to make homemade Flour Tortillas in bulk for future use, they actually freeze really well. That being said, it's important to separate each tortilla with a piece of wax paper or foil so that they don't freeze together in one big lump. Once separated, tightly wrap the stack of Flour Tortillas in foil and then place in a freezer-thickness plastic baggie. Freeze for up to six months.

To thaw, pop the bag into the fridge for a day or two.

You can also reheat your tortillas before serving. Simply place a few of them on a plate, cover with a damp paper towel, and microwave for 2o to 30 seconds. Or place individual tortillas in a warm pan for a few seconds, flipping with tongs. 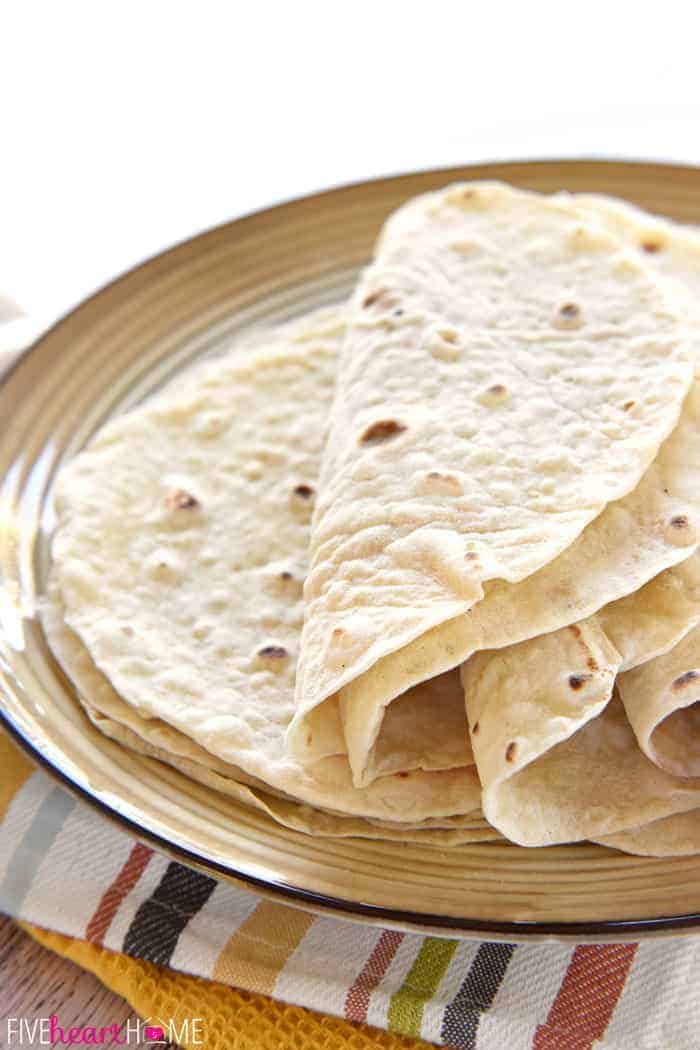 So who’s ready to try this easy homemade tortilla recipe??? Whether you’ve got tacos or burritos on the menu, or whether you simply plan to slather your tortillas with butter or dip them in salsa, you can’t go wrong. I hope these are a hit with your crew!

Now if you'll excuse me, I've got a stack of warm Flour Tortillas and a vat of queso calling... 😉 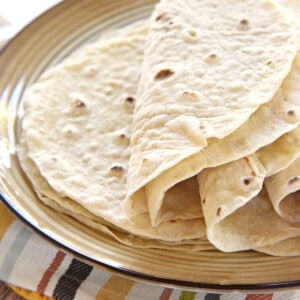