Instant Pot Refried Beans are creamy, flavorful, and effortless to make in the pressure cooker...a perfect side dish for all of your favorite Mexican recipes!

We eat a lot of Tex-Mex at our house, y'all. And if we go out to eat, odds are about 90% that we're going to end up at a Mexican restaurant. It's a cuisine that I know my whole family will eat every time, and as a fan of chips and queso (and margaritas) myself, I'm never one to argue.?

So as a result, I've assembled quite a collection of Tex-Mex recipes over the years, from tortillas to salsa to tacos to enchiladas to rice to beans to so much more. And while I previously posted (and recently updated with a video!) a recipe for delicious Slow Cooker Charro Beans, today I'm sharing the latest addition to our family's repertoire of Mexican food favorites: from-scratch Instant Pot Refried Beans!

Tossing everything in the pressure cooker makes this recipe is SO EASY...you don't even need to pre-soak your pintos. But even the very minimal effort of this recipe is worth it, because the results are about a hundred times more flavorful than any refried beans you can get from a can. 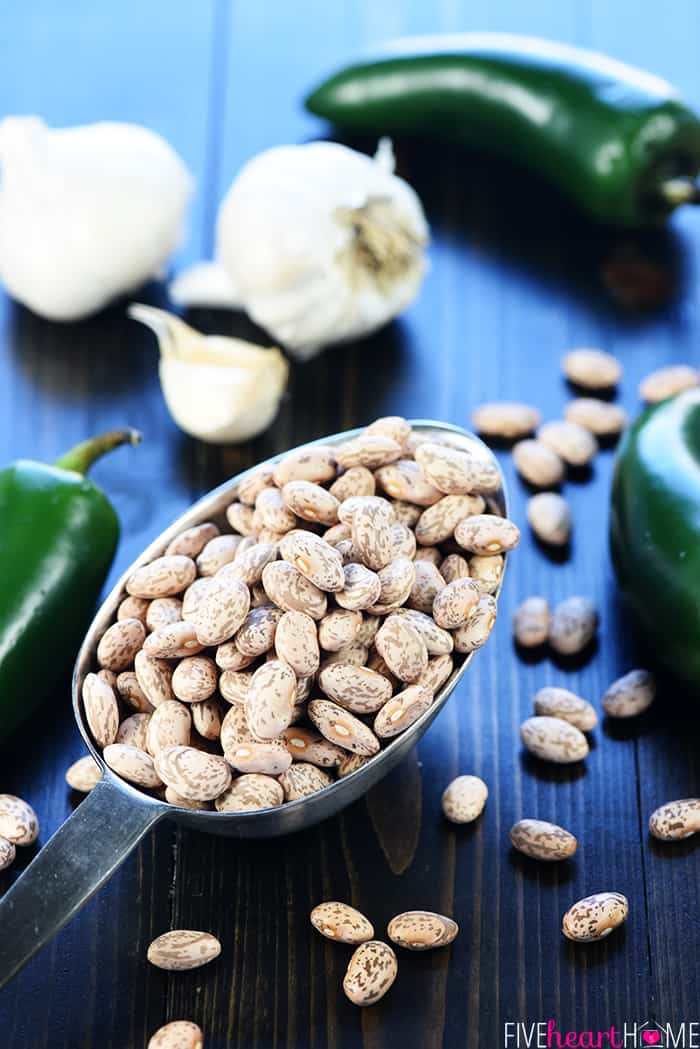 How to Make Refried Beans in a Pressure Cooker

What I really love about an Instant Pot (and what differentiates it from most slow cookers) is the sauté feature. This means that, if I wish, I can quickly sauté or sear or brown any particular ingredients before sealing the pressure cooker and letting it do its thing. This provides a great opportunity to add more flavor to a recipe without even dirtying an extra pot or pan!

In the case of these Instant Pot Refried Beans, you'll start out by sautéing some onion, garlic, and jalapeño until softened. Then add dry pinto beans and a variety of other ingredients for FLAVOR, FLAVOR, FLAVOR: broth instead of water, fresh minced jalapeño, diced green chiles, vinegar, cumin, oregano, salt, and pepper. 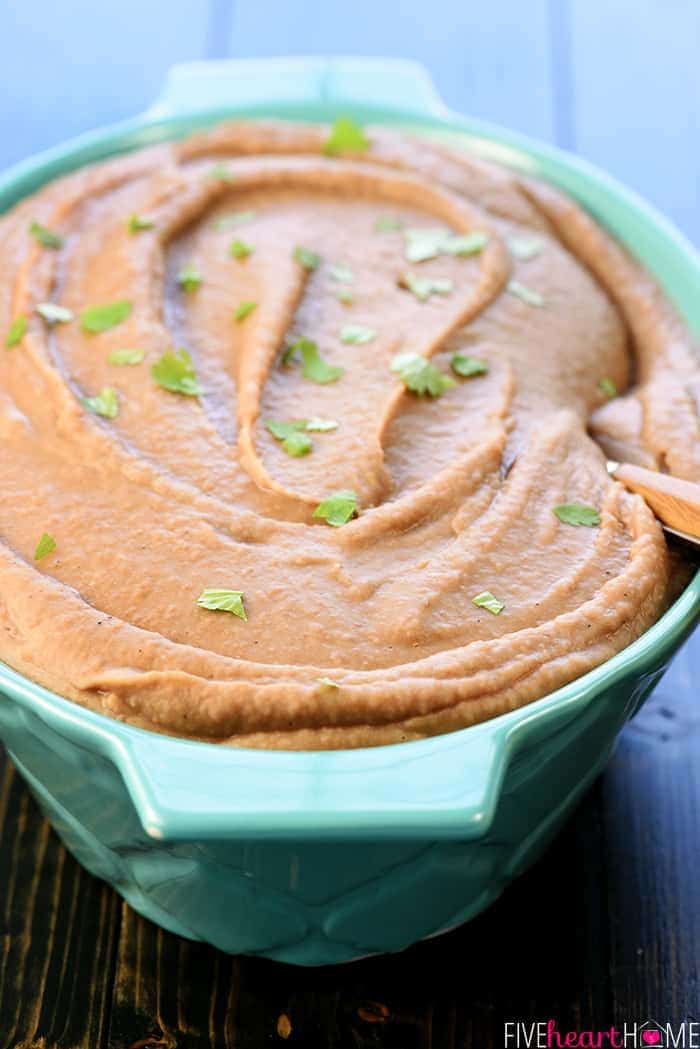 From there, simply seal your pressure cooker, set it to cook for 50 minutes, and then allow the pressure to naturally release.

So it's not that this recipe is exactly quick, per se, but it's still quicker than cooking dry beans in the slow cooker or on the stovetop. And because these Instant Pot Refried Beans are entirely hands-off while cooking, you can spend that "free time" preparing the rest of you Mexican feast...or, you know, prop up your feet up in front of the TV and eat some bon-bons for an hour or so.

Once the beans are done, use a ladle to transfer as much cooking liquid as possible to a large measuring cup. Then drain off and discard the rest of the liquid. 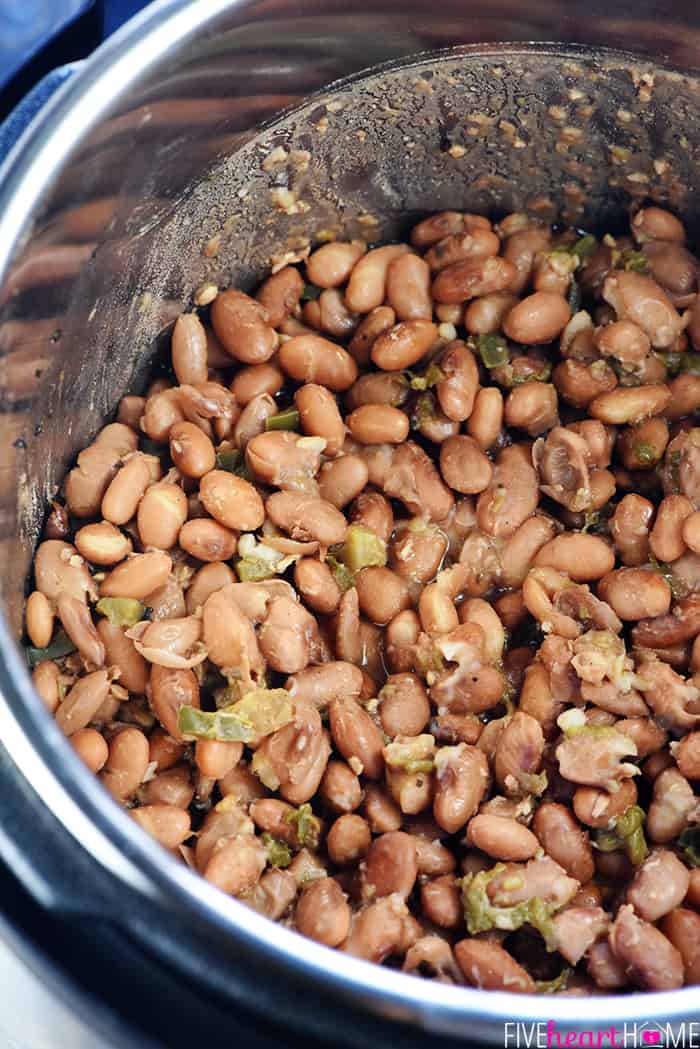 With the beans back in the Instant Pot insert, use an immersion blender to puree them until smooth, adding as much cooking liquid back as necessary for your preferred consistency (I used about 3/4 cup liquid, but you'll likely need anywhere from 1/2 to 1 cup of liquid). 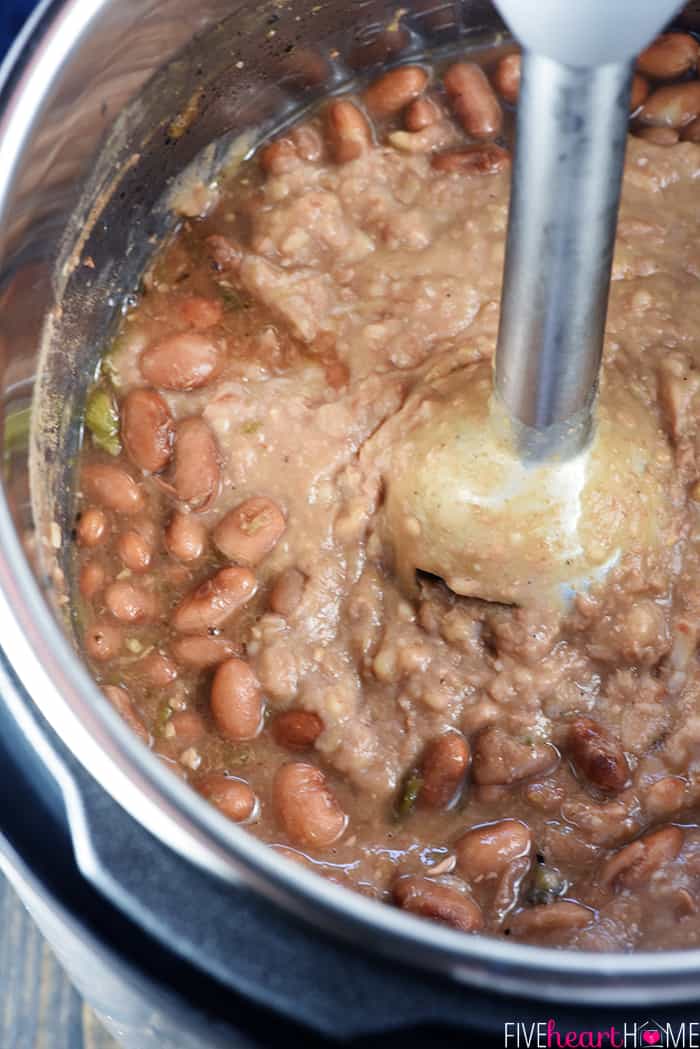 Finally, adjust the seasonings to taste, adding extra salt, pepper, and if you like, another splash of vinegar.

Drumroll please...your Instant Pot Refried Beans are DONE! That's right, friends...you don't actually have to fry your refried beans. In fact, many folks don't. But if you prefer to include this step, you certainly may do so! 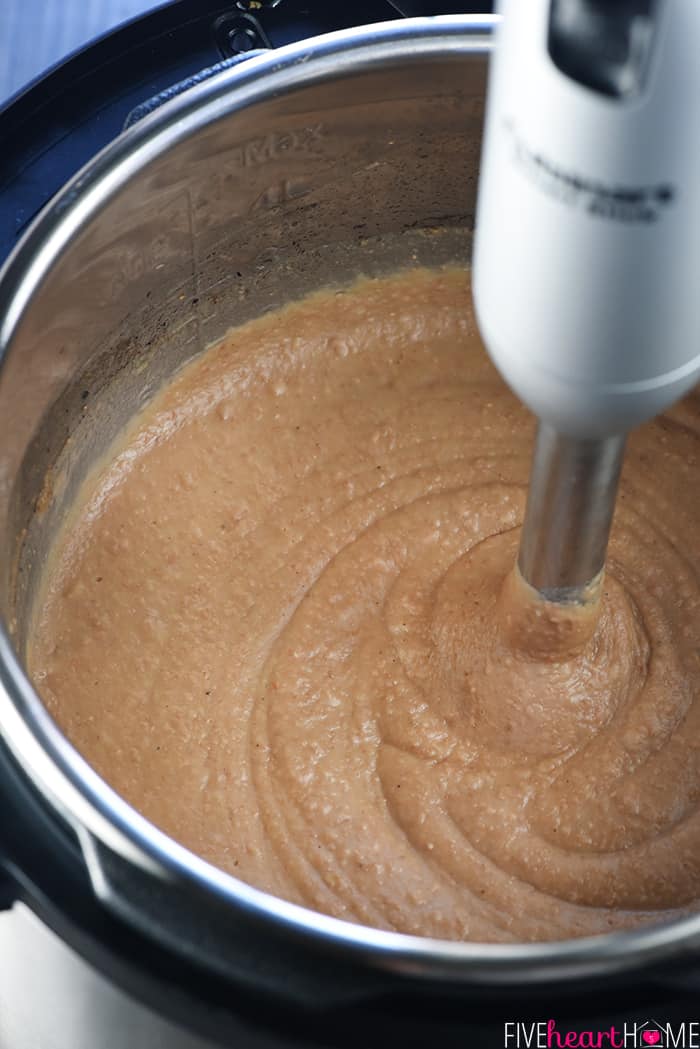 Just heat your favorite oil (such as olive oil, lard, or bacon grease ←my pick for the most flavorful) in a large frying pan. Then add the pureed beans plus 3 or 4 additional tablespoons of that aforementioned leftover cooking liquid. Cook for several minutes, stirring regularly, until the beans have thickened and are heated through. Voilà...fried beans! 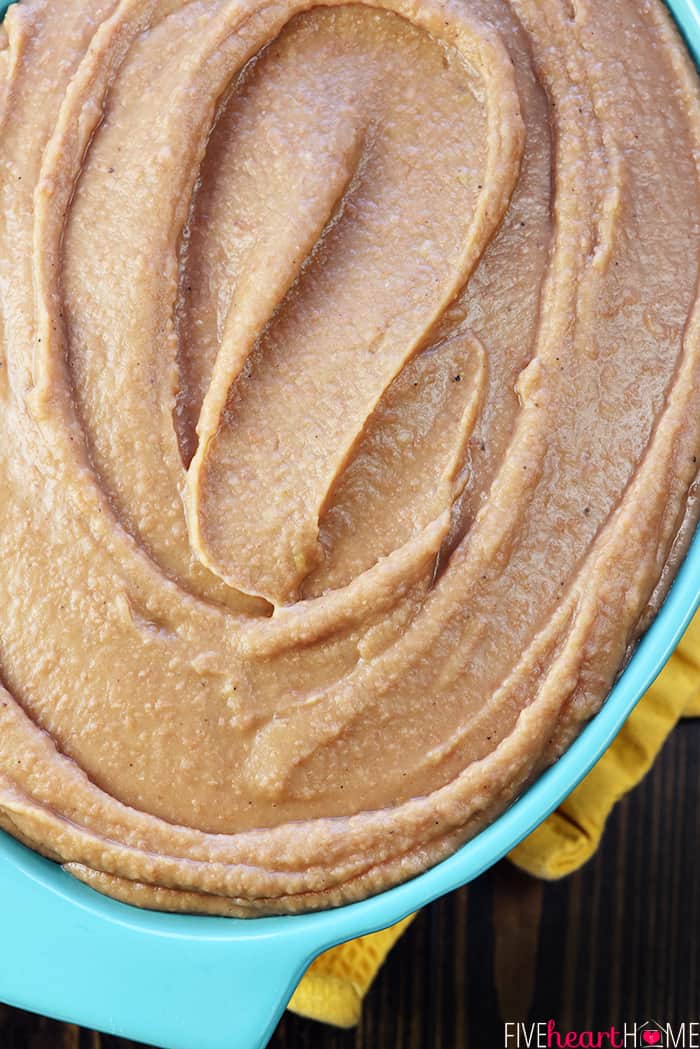 So now that we've got a big batch of homemade refried beans ready to go, however should we enjoy them? Truly, the possibilities are plentiful... 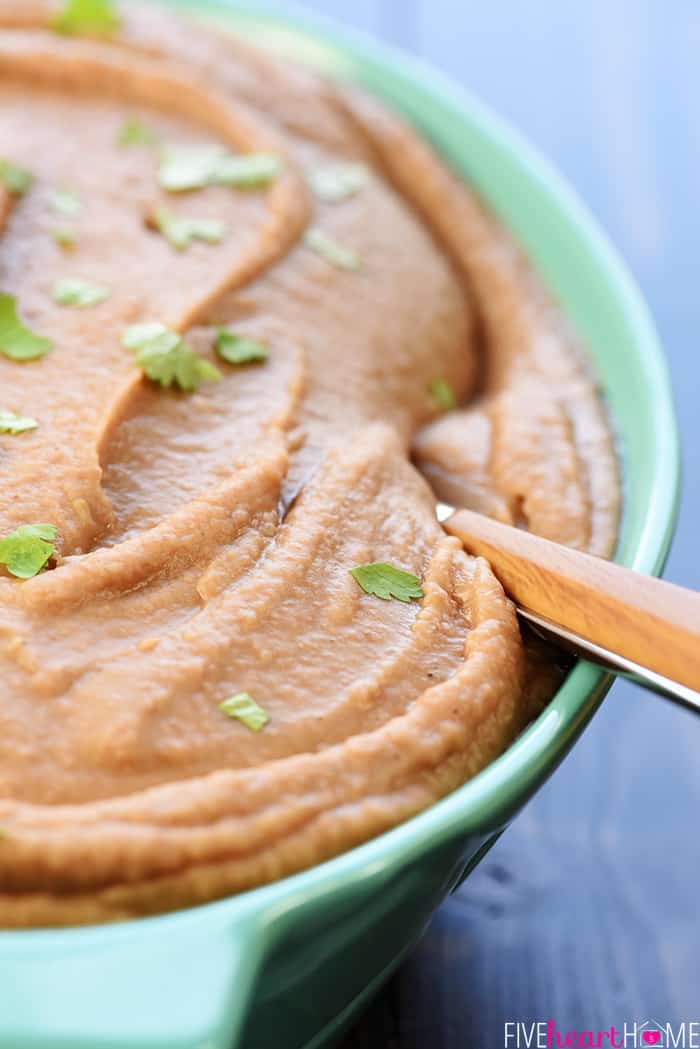 There's nothing fancy about these Instant Pot Refried Beans, but they can certainly claim to be silky, scrumptious, and -- have I mentioned -- easy to make! In fact, the only downside to making this recipe is that your family might just get spoiled. And in that case, there's a chance they could protest any canned refried beans in the future...

But I'd argue that it's a small risk to take for such a bountiful reward! 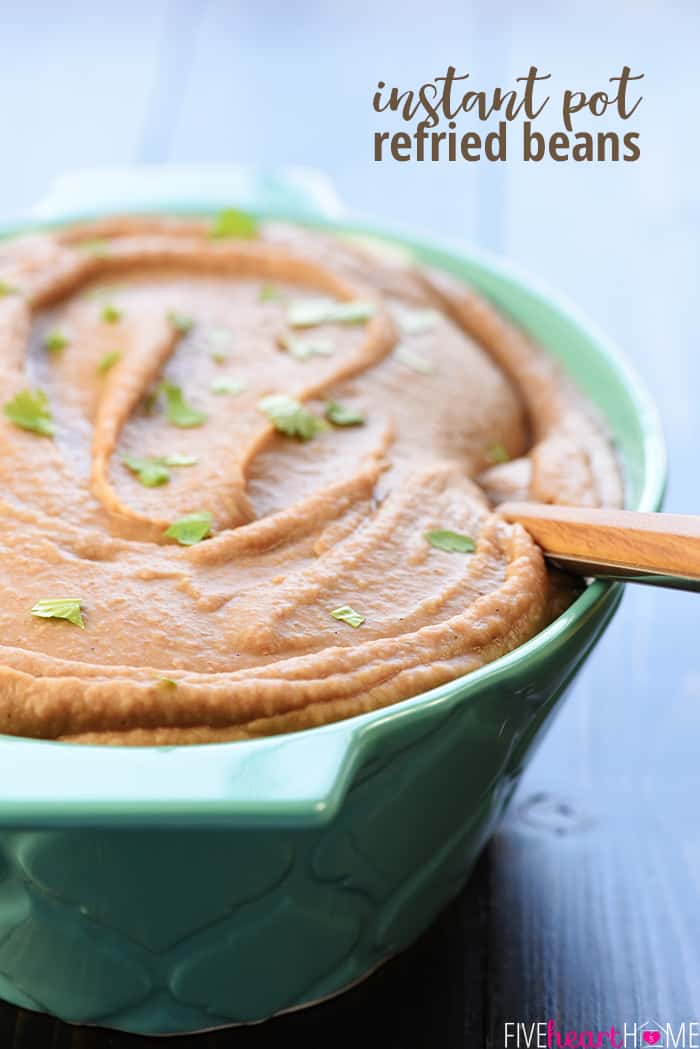 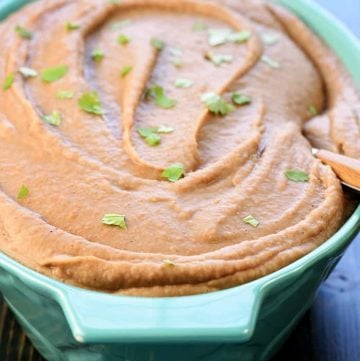