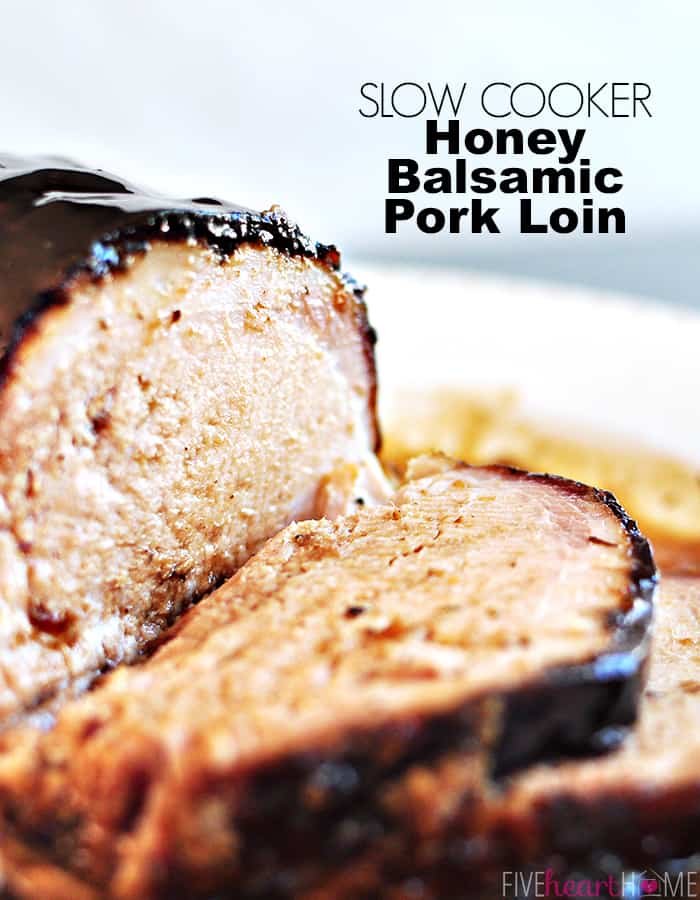 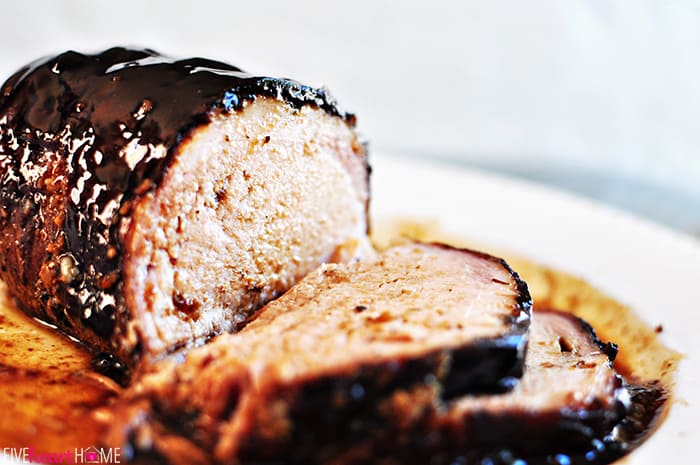 Even though our daily schedule becomes more flexible once school's out for the summer, that still doesn't mean I want to spend hours on end in a hot kitchen. So when we're not grilling outdoors, odds are I'm using my crock pot.

Plenty of folks (myself included) tend to think of slow cooker meals as winter fare, and many crock pot recipes certainly fall into that category. But there's something to be said for coming home from work or the pool or a playdate at the park and having dinner waiting on you. As an added bonus, said dinner didn't even require that the oven heat up the whole kitchen! This Slow Cooker Honey Balsamic Pork Loin is delectable any time of year.

To Season the Pork Loin

This is one of those dinners that practically makes itself.

An hour before serving, prepare the glaze!

The last time you go to glaze the pork loin, you have two choices: either pour all of the remaining glaze over the top, or brush with glaze one final time and reserve whatever remains as a dipping sauce to serve alongside your pork.

Reasons to Make This Recipe

I'm actually pretty picky about my crock pot recipes. It's so easy for meals from the slow cooker to all end up having the same general taste and texture. While that's fine when you need a quick and effortless meal, the crock pot recipes that I find myself repeating frequently are those that taste more like they could have come from the stovetop or out of the oven.

This slow cooker boneless pork loin is one of them! Sure, the meat is juicy and flavorful -- which can be said about many, if not most, crock pot meals -- but it's the glaze that really puts this dinner over the top. And when that glaze trickles down into the juices at the bottom of the pot to mingle into a flavorful, effortless pan sauce of sorts...well, YUM.

As if that's not enough to get excited about, this recipe makes a ton, so unless you have a very large family, leftover shredded pork has the potential to save you from cooking for another night or two (can I hear a "hip, hip, hooray"?!).

If transforming your leftovers into another meal sounds appealing to you, the possibilities are abundant

Please excuse the superfluous exclamation points. Who knew leftovers could be so exciting?

So do yourself a favor this summer (or any other season) and break out that crock pot to make this slow cooker boneless pork loin in all of its honey balsamic glory! Because in my book, minimal effort for maximum culinary delight is a recipe for summer fun. 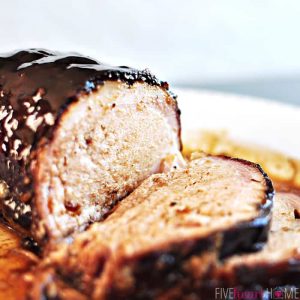 If my pork loin has a layer of fat on one side when preparing this recipe, I cook it with that side up so that the fat can melt into the meat and further moisten it while cooking. Then I carefully flip the whole loin over with some tongs before I start glazing it. This way, when we're ready to eat, we can cut away the layer of fat without losing the glaze.
Calories: 267kcal | Carbohydrates: 10g | Protein: 38g | Fat: 6g | Saturated Fat: 2g | Cholesterol: 107mg | Sodium: 461mg | Potassium: 660mg | Sugar: 8g | Vitamin C: 0.6mg | Calcium: 13mg | Iron: 1.1mg
Made this recipe? I'd love to see on IG!Mention @FiveHeartHome or tag #FiveHeartHome!

Pin
Share
« Dad Libs ~ A Free Printable to Celebrate Father's Day!
How to Resize an Image in Photoshop for Large Prints »