Quinoa Pudding is a creamy, decadent, healthy breakfast or dessert that tastes like a cross between rice pudding and tapioca but stars nutritious superfood quinoa!

I'm quickly discovering that January is a month of multiple personalities when it comes to food blogging. First of all, after a holiday season filled with rich, indulgent foods, everyone is resolute to start off the year on a healthy foot. Thus, enter the lightened up, nutritious recipes. Then there's the fact that January is one of the coldest months, so everyone is craving cozy soups and comfort food via their effortless crock pots. With Super Bowl right around the corner, some folks are trying to plan out their game-watching (or at least their commercial-watching) appetizers and snacks. And finally, Valentine's Day is on the horizon, so that means decadent desserts and lots and lots of chocolate!

But today we're not delving into football-friendly fare or recipes incorporating hearts and copious amounts of butter. Rather, Quinoa Pudding is a sweet treat that's actually wholesome and comforting at the same time. And since that covers most, but not quite all, of the January food blogging bases, I suppose you could also eat this dish while watching a football game. 😉

So did you ever jump on the quinoa bandwagon? This gluten-free, high fiber, complete protein of a grain has become mainstream and quite popular over the last number of years, and rightfully so. Nevertheless, it was a later addition to my family's menu plan, and initially, I primarily relegated it to the savory side dish category as a replacement for rice or pasta.

Well, all of that changed in 2014 when I first came up with this Quinoa Pudding. I was determined to incorporate quinoa into our diet, both more regularly and in unique ways. So when it struck me that it just might make a tasty and healthy pseudo-rice pudding, I got to experimenting.

I ended up making this recipe multiple times in different variations to determine my favorite combination of ingredients. After trying several versions, I think I came up with a perfect formula for Quinoa Pudding. My family goes crazy over this and I think yours will, too!

The first step in making any quinoa recipe is to very thoroughly rinse and drain your quinoa. Quinoa grains are naturally coated with a compound called saponin, and if it's not washed off, your cooked quinoa will come out tasting bitter and unappetizing. So...

The first time I made this recipe, I started with 3 cups of milk. After about 20 minutes of cooking time, the quinoa had absorbed all of it. The final dish had the texture of a thick oatmeal and the quinoa still had an al dente bite. It was delicious, but a tad thicker than I had hoped it would be.

So the next time, I started with 4 cups of milk. As a result, the cooking time naturally increased, but I actually preferred the resulting quinoa, which was more tender and milder in flavor. Plus I loved that the pudding was creamy and almost tapioca-like in texture, with quinoa grains floating in a pool of thick vanilla cream.

To sum it up? More milk and longer cooking time is definitely my preference here.

I've made this Quinoa Pudding recipe with either maple syrup or granulated sugar. Both work and I don't really notice a difference in the resulting flavor or sweetness level.

Since this quinoa recipe originated in the name of health, however, I lean towards sweetening it with pure maple syrup, which is at least a natural, unrefined sweetener. Just know that plain ol' white sugar will work just fine as well if that's your preference or what you have on hand.

Some commenters over the years have reported success with substituting honey for the maple syrup or even leaving out any the sweetener altogether! They've said that the vanilla and cinnamon lend enough flavor that a sweetener is unnecessary. I'll leave that up to you! 😉

So there you have it! Warm, dreamy Quinoa Pudding is a healthy version of comfort food! It tastes like a decadent treat but it's brimming with nutrition. And it's equally delicious and nourishing as either breakfast, a snack, or dessert!

Whether you've been wanting to try quinoa or you're already a quinoa veteran, this recipe is a winner. I can't wait for y'all to try it!

P.S. Call me a redneck, but while I logically know that quinoa is pronounced "KEEN-wah," every time I read it or write it, I can't help but sound it out in my head as "kwin-OH-uh." Please tell me I'm not the only one...ha. 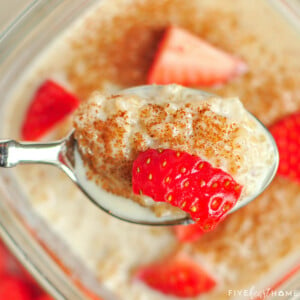